This unofficial guide for Kingdom Come: Deliverance will help you with this rather complicated game. The guide is divided into a few extensive chapters and the first one contains various tips.

What should I remember about before starting a new game?

More tips can be found in the Starting tips chapter.

How to develop the hero's main stats?

In Kingdom Come: Deliverance you develop your skills by performing activities related to them. Some of the skills can also be leveled up in an alternate way, e.g. by visiting trainers and paying (a lot) for their training.

More information about each of the skills can be found in the Character progression chapter.

The most common problems with Kingdom Come: Deliverance

More detailed solutions to the problems listed above and other topics can be found in the FAQ section.

The guide's main focus is to provide various starting tips. Thanks to them you should be able to learn all of the basic gameplay rules and survive the first few hours. Other pages contain descriptions of topics such as combat, character progression, travelling around the game's world, meeting with NPCs, equipment management or using alchemy.

A lot of time and effort was put into the FAQ chapter. There, you can learn how to get rich fast, how to find a good weapon and armor with ease, which abilities should be unlocked first, how to win bigger battles, how to act when your character is caught red-handed or how to successfully sneak into enemy camps.

The chapter dedicated to achievements is another important part. There, you can find a full list of trophies and Steam achievements along with tips that will help you unlock them. The final part of the guide consists of world atlas which features high-resolution maps of the entire world with the most important locations marked on them.

Yes, you can romance in Kingdom Come Deliverance. Check our romance guide and learn more about Lady Stephanie (quest At Your Service My Lady) and Theresa (quest Courtship).

Treasure maps in Kingdom Come are pictures with symbolical hints - if you find the right place, you will get a reward!

The guide for Kingdom Come: Deliverance also offers a detailed walkthrough. There, you can find solutions for both the main quests (divided into acts) and the side quests that you can unlock by talking with NPCs. Their descriptions contain information that can help you start them, what are your possible rewards for finishing a given quest and different ways of completing them. Many quests in the game aren't linear which is also mentioned in their descriptions. You can also check future consequences of your actions.

Kingdom Come Walkthrough contains all main quests with advice. Check out our solution:

Kingdom Come offers some smaller side quests called activities. Here you can find walkthrough for several activities in many towns:

The most important keys for Kingdom Come on PC

Below you can find our list of the most important keys and buttons used in Kingdom Come: Deliverance (PC version). The full list of controls can be found in the Controls chapter.

Kingdom Come: Deliverance is a complex RPG set in Medieval Europe. The developers put a lot of focus on realism. This is reflected by a complete absence of fantasy elements (magic, monsters etc.) and numerous difficulties in keeping your hero alive. Your character can't heal fast but he can feel hungry and tired. This realism is an important part of the combat system where you can use various types of melee and ranged weapons. 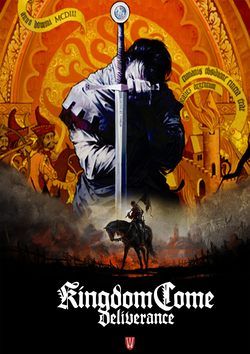 The action of Kingdom Come: Deliverance starts in 1403, several dozen years before the bloody Hussite Wars that shook not only the Kingdom of Bohemia and the Holy Roman Empire, but also other countries, including the Kingdom of Poland ruled by Wladyslaw Jagiello. The developers made sure to ensure accuracy not only in terms of details such us character appearance, but also of historical events. In the game we can meet, for example, both Polish knights, who visited Bohemia, and representatives of the Teutonic Order that competed and warred with Poland in that period.
Kingdom Come: Deliverance offers a lot of freedom and a huge open world. The protagonist, a humble blacksmith whose family was murdered by an invading army, is described by a number of various statistics and skills. It is entirely up to the player whether he becomes a knight or a rogue. The trait values increase with time and can also be modified by means of alchemy. Furthermore, we can make use of great character customization options in the form of 20 slots for weapons, clothing and equipment.

Creators of Kingdom Come About Petting Dogs, Mods, and Pissing Against the Wind

In over a year since the premiere of Kingdom Come: Deliverance, Warhorse's developers have triumphed: they have overcome adversity, achieved commercial success, found themselves a publisher, which allows them to look into the future with optimism.

Realism is the jam! Kingdom Come and the Czech school of gamedev

Playing Kingdom Come was somewhat of a deja vu for me. Im convinced Ive played this game before only the setting was, well, less medieval. Is the new RPG by Warhorse going to join the ranks of the all-time classics, along with its predecessors?