The Die is Cast is one of the main quests in Kingdom Come: Deliverance. You can start it right after entering Sasau Monastery. Henry must infiltrate the enemy fort called Vranik. The way of reaching that place depends on your previous actions. However, the exploration itself is more linear. The last part of the quest is the most challenging one because you will have to retrieve your equipment and escape from the fort.

WARNING - Before beginning this quest try to complete all side quests beforehand. This will save you from potential future problems with quests in further parts of the game.

Meet with the bandits in the marshes 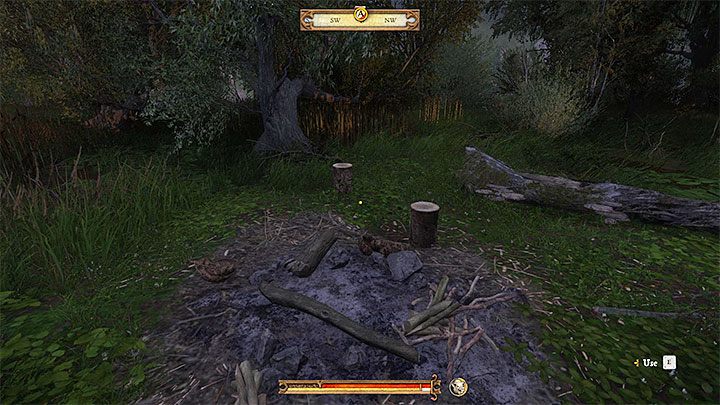 You can meet with the bandits only after finding Pious in the monastery during the previous main quest (your decision regarding the man doesn't matter). The meeting spot is in the marsh located east from Sasau Monastery. There, you have to interact with the grate. Henry lights it up. After that the familiar bandits will arrive. You can behave in the following ways:

Show them the lucky die - This is possible only if you got the die either by letting Pious go or by killing him. You learn the location of fort Vranik.

Lie that there was no gold on Pious body - You can choose this variant if you have failed to find Pious in the monastery (the quest was failed) or if you got him arrested (which means that you didn't receive the die). You are forced to give a certain amount of your Groschen to the bandits (you can't haggle). You can lose even a few thousands of gold. You learn the location of fort Vranik.

Attack and kill the bandits - Deal with the archer first and then you can start fighting with the rest of the bandits. Try to attack them one after another and don't let them surround you. Search their bodies and collect a lucky playing die. It will help you get inside the fort Vranik. However, you won't learn its location.

Escape from the meeting spot - Watch out so you won't get blocked on bushes or near the river. Increase the distance between you and the bandits and call your horse. You won't learn the location of fort Vranik. 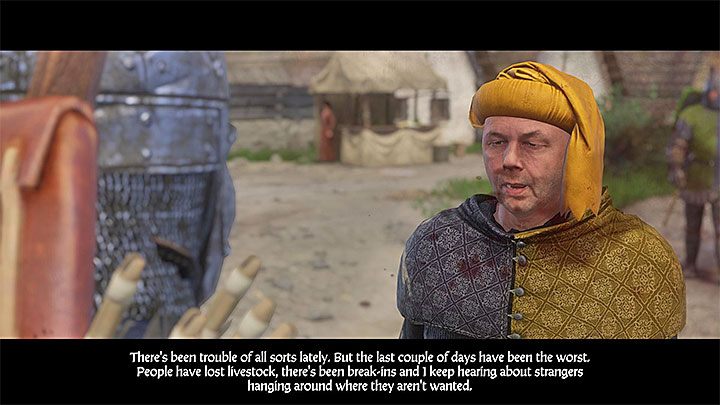 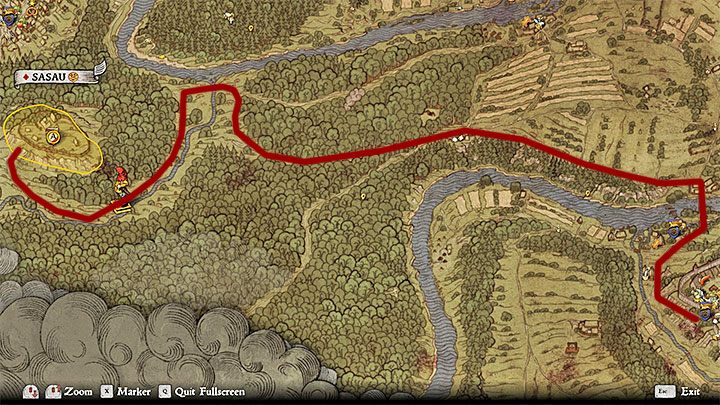 Before you go there, you can complete an objective where you give your report to Radzig and Hanush. Meet them in Rattay upper castle.

The best place to start your journey to the bandits' fort is in Rattay. The suggested route is presented in the picture. Head north from Rattay and turn west after passing by Peshek's farm. Head towards the another small bridge. Cross it and turn south-west (follow the path that goes along the stream). Reach fort Vranik from south. The game also unlocks a new fast travel point.

IMPORTANT NOTE - In accordance with the displayed warning, entering the fort Vranik will initiate a whole series of events that will prevent you from dealing with some side quests. In concerns Talmberg quests (also a quest related with a potential romance with Lady Stephanie), but due to numerous bugs of the game it's worth to complete all other side tasks from different locations of the game beforehand. If you skip them, then some serious bugs and errors may occur, for instance, the lack of a dialog option in a conversation with the NPC or death of an important figure that was crucial to finish the desired quest. 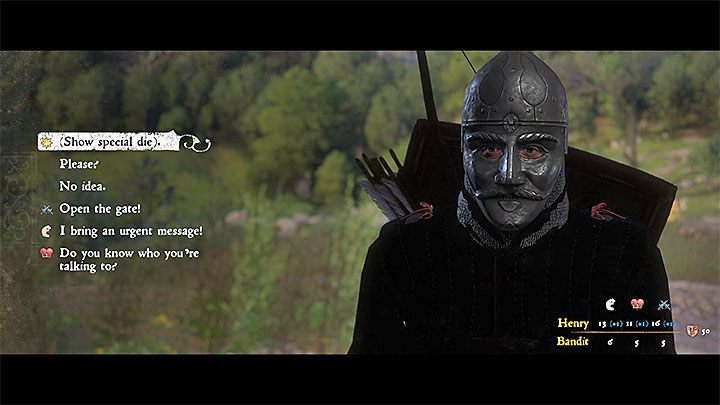 Approach the main gate. You are stopped by one of the guards. Here are your possible choices:

Show him the lucky die. This is only possible if you got it from Pious or from one of the bandits in the marshes.

Use a unique dialog line. Luckily for you, the guard's stats are low. Choose persuasion (the guard has 6 points), impress (5 points) or intimidation (5 points).

Examine the camp and meet with Erik 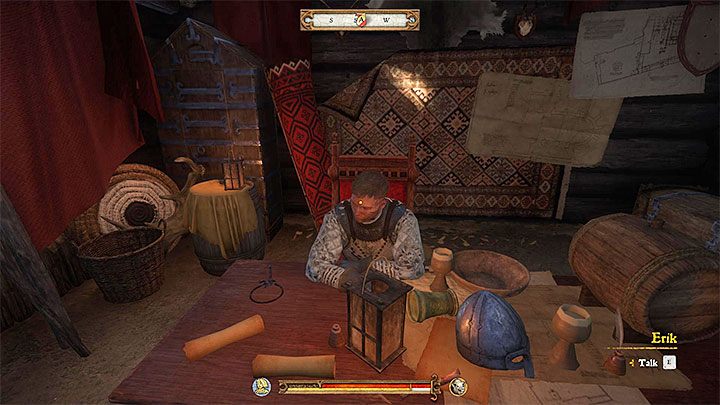 You won't be stopped by anyone during your stay at Vranik. You can use this and perform an optional reconnaissance - you have to reach places where you can hear Henry's commentary. The possible places to explore are:

The incomplete palisade - the eastern part of Vranik. Remember this place because you will have to use it to leave this fort during the next main quest.

Palisade that separates the exterior part from the interior.

The main camp - Henry comments the number of enemies and a large amount of tents.

Get into the interior part of the fort and enter the red hut with Erik inside. He sends you to master Vanyek to test your combat skills. During your conversation with the Combat Master you can tell him that you are from Skalitz (he is from that place too) or lie that you don't know each other. You will fight with real weapons. The outcome of this fight has no impact on the quest. Go back to Erik and watch a very important cut-scene. 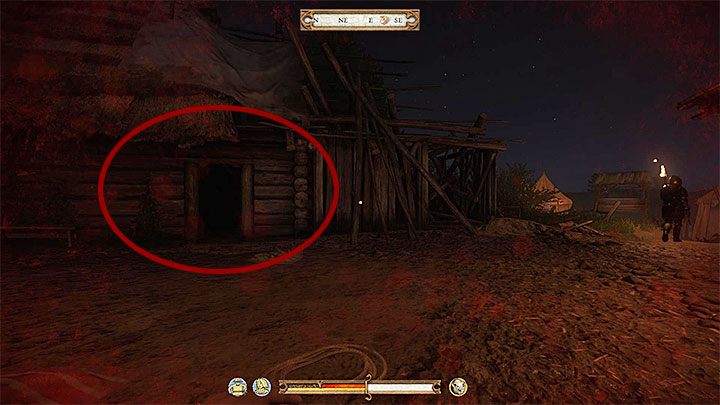 Zbyshek rescues Henry. You can talk with him about every topic and convince him to tell the whole truth - use either persuasion (Zbyshek has 3 points) or impress (2 points). Listen to his plan.

In theory, you should get out of the fort immediately. However, the first thing that you should do is to retrieve Henry's equipment. It is kept in the locked room, the one where you met with Erik twice. Carefully move closer to the hut's exit. The area on the left is patrolled by a guard with a torch. Wait for him to move away and go to the left building marked in the picture. Find the chest and take out lockpicks. 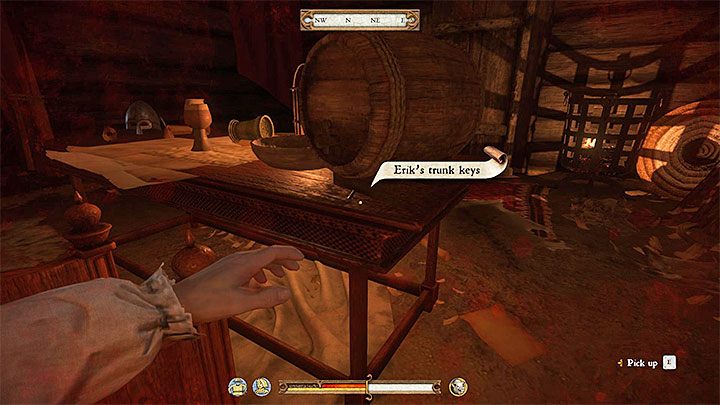 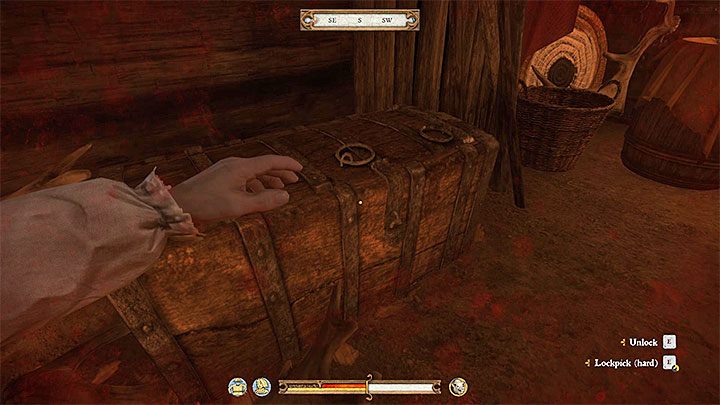 Reach the locked doors to the right from the place where Henry was kept. Use a lockpick (the door is locked with a very easy lock). Thanks to that you enter Erik's room. Examine the table carefully. Erik's trunk keys (the picture 1) can be found right below the small barrel. Use them to open the chest presented in the picture 2, the one where Henry's equipment is.

Note - There is another chest in this room. It has a hard lock. Open it and you will be able to steal Erik's items. The most valuable are Magdeburg Cuirass (its value is 1,900 Groschen) and Raven's Beak mace (1,400 Groschen). The chest also contains, e.g. 200 Groschen.

Note - Don't worry if you have missed the chance to get Henry's equipment back. You can do that after winning the battle that will take place during Payback main quest. 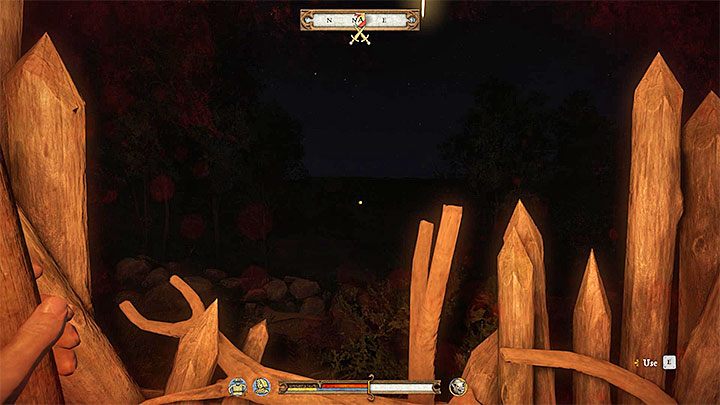 Reach the previously mentioned incomplete palisade in the east. You can sneak here - try to go around enemies either from left or from right. Alternatively you can sprint to that place.

You shouldn't die even after a few attacks if you are wearing your retrieved gear. Reach the place presented in the picture and press the interaction button to jump down. 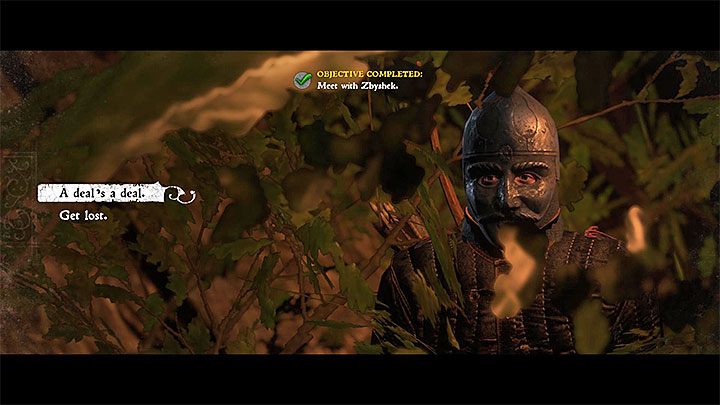 Keep running through the forest (you should take out a torch). Don't stop, even if you aren't chased by anyone and watch out so you won't fall from a great height when you are going down the hill. Reach the place where Zbyshek is. You must make another choice:

Fulfill the deal - You and Zbyshek go back to Rattay. After giving your report you can call him a traitor (he is put into prison) or a friend (he will receive a reward).

Break the deal - This choice isn't recommended because you will have to fight with Zbyshek. You can have a hard time winning if you didn't get your gear from the chest (also, Henry is weakened because of the tortures). The best moment to betray Zbyshek is after reaching Rattay.

Regardless of your choice you are rewarded with Groschen and you start another main quest.