If You Can't Beat 'em is one of the quests of the main storyline of Kingdom Come: Deliverance. The task will have Henry find a group of "crips", people who recruit volunteers for a new bandit encampment. The game allows you to locate them through various means and methods. The walkthrough includes all possible variants of tackling the quest.

Henry's task is to find out the exact method used by the crips to recruit new bandits. This will help the protagonist in disguising as a volunteer. The recruiters can be found in three ways. You have to choose one variant and see it through to the end. This will complete the main part of the quest and the remaining two options will be removed from your journal. The available methods are as follows:

Meet with Miller Simon in his mill east of Sasau Monastery - you'll have to complete a series of thieving-related tasks during the additional quest Thick as Thieves - Simon.

Meet with the Bailiff of Sasau - you'll have to help the local tanner in getting rid of men organizing wrestling fights behind his house. This means you'll have to beat some people up.

Meet with the barkeep in Sasau - you'll have to talk to the tanner and heal the man in the monastery's infirmary during the side quest In God's Hands. This option doesn't require you to fight anyone. 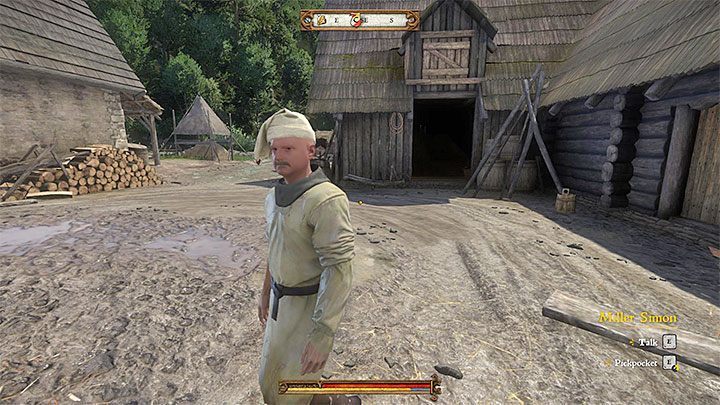 You'll have to reach the mill, located east of the Sasau Monastery. You can start from the monastery. Once you reach your destination, talk to Miller Simon and ask him about the crips. The conversation with Simon can go two ways:

If you haven't already done some jobs for Simon, he won't reveal the location of the bandit camp without Henry stealing some stuff for him. The game will present you with an additional quest Thick as Thieves - Simon. During the quest, Henry will have to steal three different items. The walkthrough for this quest can be found in the guide section that deals with various quests available in Sasau.

If you've already complete all the thievery jobs from Simon, you can immediately talk about the crips and get all the necessary information.

In both cases, Simon will eventually inform Henry on how o contact the bandits and the quest will be updated. You do not have to complete the remaining two variants.

Option 2 - Meet with the Bailiff and the tanner in Sasau 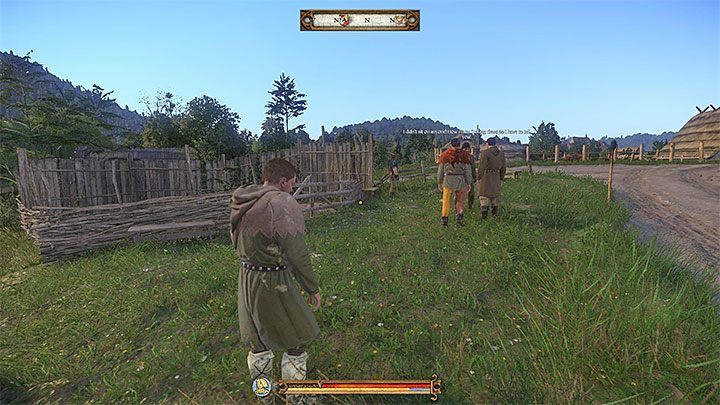 Begin with finding the Bailiff in the town parts of Sasau and talking to him (you can use persuasion during the conversation, but it's optional and a failed attempt will cost you nothing). He will send the protagonist to the local tanner. Talk to the tanner. While you may help him with the blackmail problem, you'll learn everything you need to know (namely the problems with troublemaking wrestling fans) even without getting involved.

Find the local "fight club" and wait untill 18PM for a group of people to assemble. First, talk to their "leader" (Punch). Optionally, you can agree to deceive the tanner, but only if you use persuasion (Punch has no points in this skill, which means you cannot fail). Return to the tanner and tell him that you've gotten rid of the "thugs". He'll give you 95 Groschen as reward. The troublemakers will in fact leave, but only for a short moment. Talk to Punch - you can give him half of the reward, a quarter of the reward, or nothing. Tricking the tanner won't prevent you from completing this variant. Wait a few days and the fighters will be back at the arena. 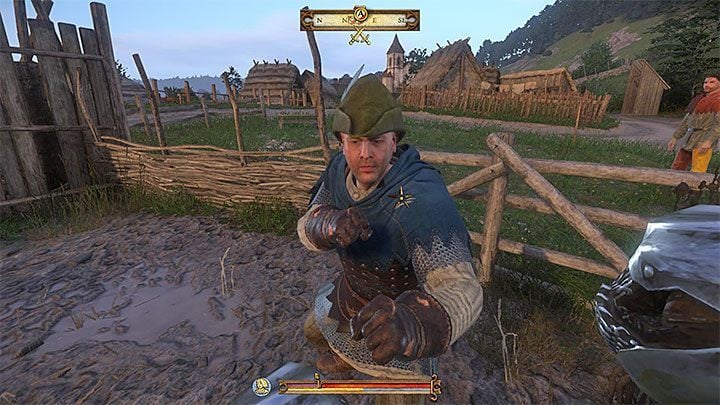 This quest will require you to beat a few guys in a series of fistfights. First, you'll have to defeat the four "second-rate" fighters standing around the arena. You can challenge them in any order. Defeating them should be easy, but keep your eyes on the endurance bar, and don't let it be fully depleted. If hand-to-hand combat is not your strongest skill, talk to Punch to buy some lessons.

Punch can only be challenged after you've dealt with his underlings. This fight will be a bit more difficult, but mainly because he's tougher than his men, and it takes more time to wear down his health bar. Once he's down, you'll receive 150 Groschen. Wait for Punch to come around (you can use time acceleration). Talk to him about the crips and he'll tell you how to find them. The quest will be updated and you don't have to complete options 1 and 3 anymore.

Option 3 - talk to the barkeep and tanner in Sasau 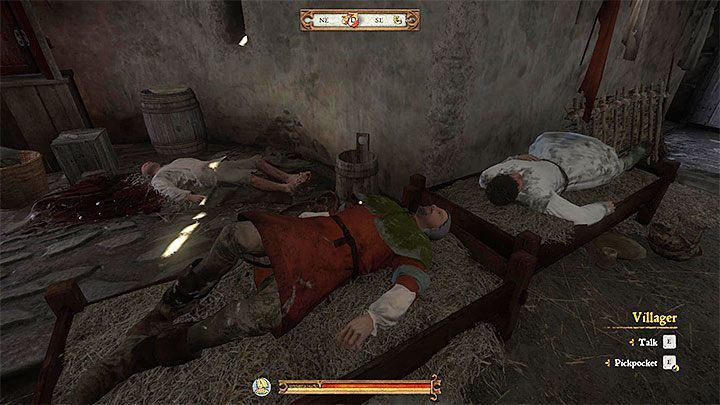 Once you reach the town area of Sasau find the innkeeper. Bring up every topic that is related to the crips. You'll learn something more about Miller Simon from the first option AND you'll be sent to the local gravedigger. Find him and talk to him. Ask all the available questions. The gravedigger will send you to the injured thug.

You'll have to go to the Sasau Monastery's infirmary. The screenshot above depicts the patient you'll need to talk to. The situation can develop in of the three directions from there:

Assuming you've acquired the information from the man with the broken leg, the quest will be updated. You don't have to complete options 1 and 2 anymore.

Meeting with the bandits in the church

The info on how to contact the crips can be acquired if you've completed any of the variants described above. Once you have them, go to the church in the center of Sasau by night. Interact with the altar to trigger a cut-scene depicting your meeting with the bandits. You'll learn the bandits' requirement for joining the group (killing one Pious in Sasau Monastery), after which you'll proceed to the next main quest.