Rocketeer is a main quest in Kingdom Come: Deliverance. Henry can trigger this quest during another main mission, Siege. Tobias Feyfar informs the protagonist about the need of finding a siege engine specialist, Konrad Kyeser, and convincing him to come to Talmberg and help build a trebuchet. The game allows you to recruit Konrad in a few different ways. 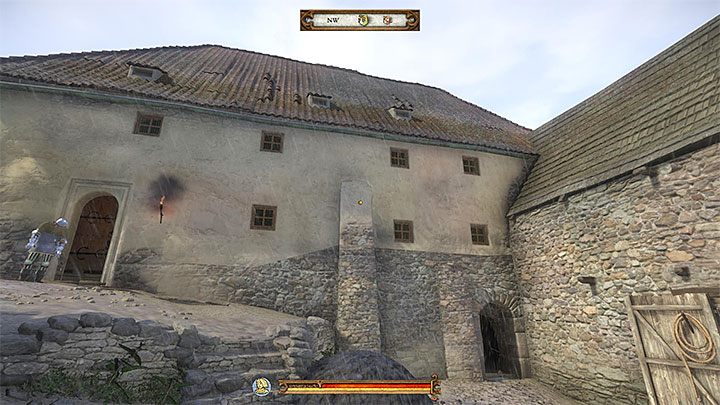 Go to the Sassau monastery. Ask any of the guards or monks about the whereabouts of Konrad Kyeser. You will learn the location of his dwelling in the northern part of the monastery. The entrance is guarded by Urban during the day, but you don't have to resort to unique dialogue options. Just bring up the name of Tobias Feyfar, and you shall receive the Custodian's house key. Konrad will tell you that he can't leave the monastery due to his current arrangements (make sure you exhaust all dialogue options). A possible solution to this matter can be found a little bit further down this walkthrough. 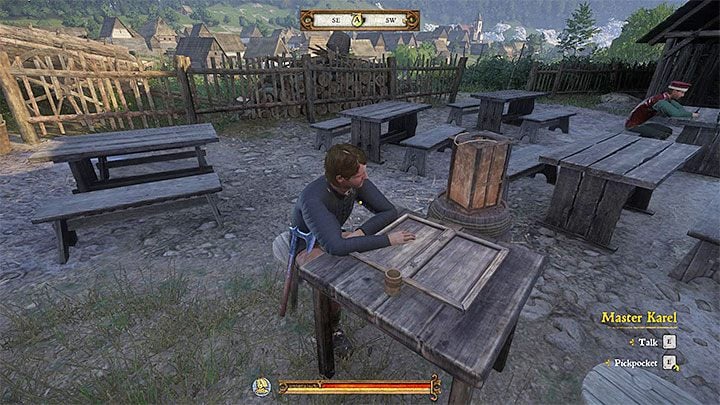 The plan here is to cut Karel from all his gold, due to which he won't be able to pay up. You can do that in different ways: 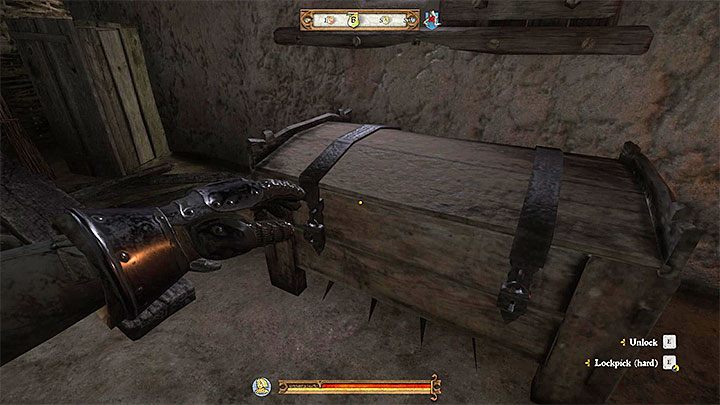 This solution requires you to sneak to Karel's house - the best idea is to do that during the day, when nobody's at home. Go to the first floor and break into the chest shown above (difficult lock - use lockpicks or just steal the key from Karel). Take the Karel's commission and go back to Konrad. Listen to his plan. 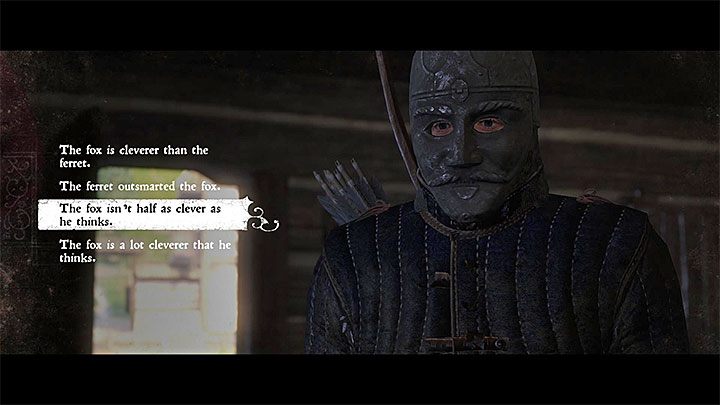 Go now to the scribe in the town part of Sassau. You can utter the password given to you by Konrad (it's the 3rd dialogue option; refer to the above screen). Even if you don't do that, you should be able to get him to help you. Give the document to the scribe and give him 2 hours. He will produce a Forged leave of absence.

Attention - Don't wait too long! This variant needs to be finished quickly; otherwise Karel will notice his documents missing. 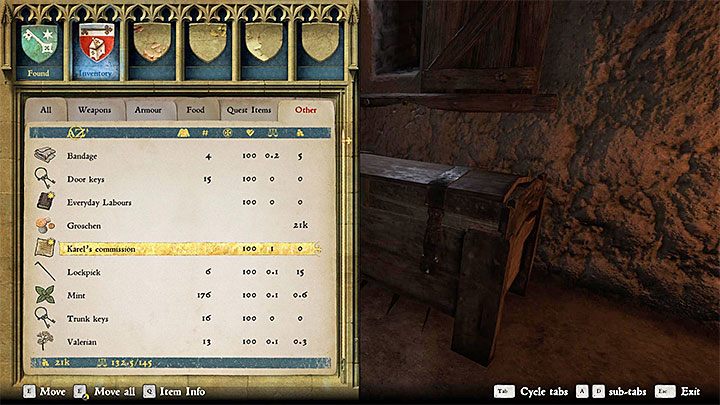 First, you have to go to Master Karel's house. Open the chest again, and place the original document there.

Only now go to Karel to show him the forged version. He will demand you accompanied him on the way to his house. Follow him and let him take a look inside the chest to find the original inside. This will conclude the second variant. 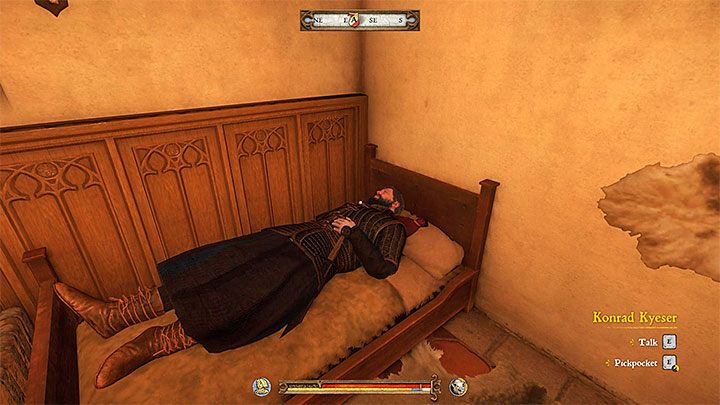 If everything else fails and you cannot convince Konrad any other way, you can do the third the old-fashioned way. Choke out Konrad and carry him out of the monastery. Do that at night, when Urban isn't guarding the door. Unfortunately, there's another guard inside the building. Kill him or choke him out. Reach Konrad in his bed, choke him out and load him on your back. As you're carrying him out, make sure the guards patrolling the monastery don't spot you.

Go back to Konrad and solve the Peychar problem 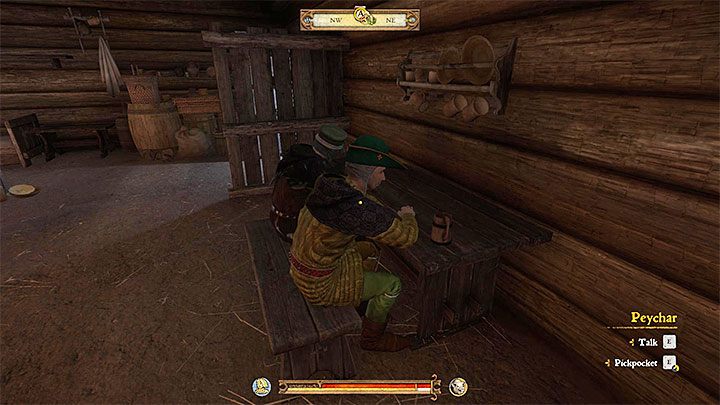 If you've chosen variant 1 or 2, then go back to Konrad to learn that he's afraid for his life. You will have to take care of this thing. Ask him about Peychar (you can also talk to other people in the monastery about it). Peychar is mostly poking about the inn south from the monastery during the day. He has a green hat and can be either inside or outside. Talk to him. 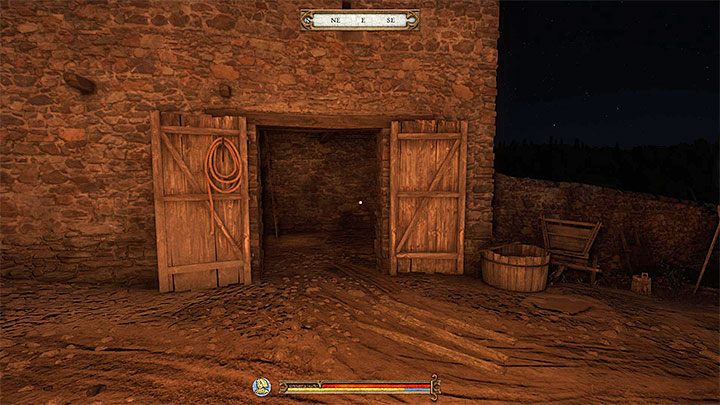 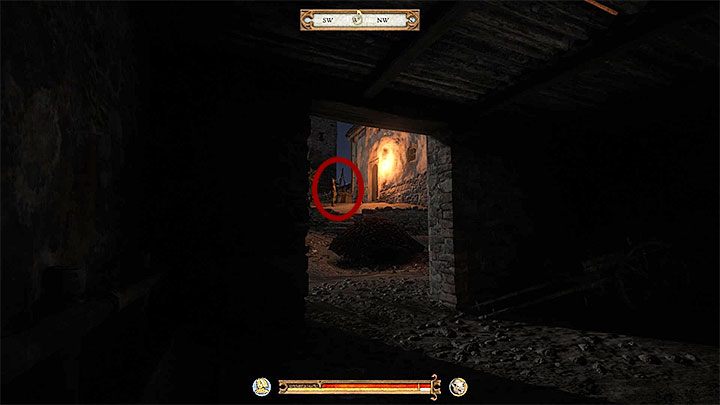 Go back near Konrad's building and enter the shed shown on the top picture above. Skip some time until it's midnight. Peychar should appear near the entrance to Konrad's building - see the bottom picture. If you can't see Peychar anywhere, make sure that you're well concealed inside the shed and skip one more hour. Repeat if necessary (you might need to wait one full day). 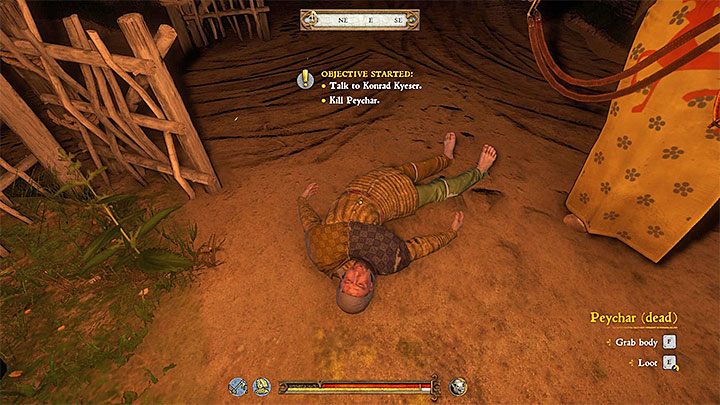 There are a few ways this thing can turn into. If he notices you, he'll attack. You need to defeat him, either knocking him out or killing him. If you can manage to sneak up on him (or when you talk to him after he comes round after being knocked out), then you can talk. After listening to his arguments, you can either let him go or kill him. Note (minor spoiler) - if you let him go, it can have some negative consequences later on in the game: he will appear in Talmberg and try to kill Konrad - fortunately, the attempt will be frustrated by guards.

Regardless of what you do here, go back to Konrad to finish the quest. Now you can meet Tobias in Talmberg and go back to the Siege. Finishing this quest is worth 1000 groschen, you will also receive Feyfar's trunk key. You can find the chest in his tent - it contains a very good helmet - the Italian bascinet - as well as Magdeburg gauntlets.