Dice is the only minigame available in Kingdom Come: Deliverance. Below, you can find a number of tips that will help you achieve better results in this game. Completing the Gambler achievement requires playing dice. In theory, each round of dice can help you earn more money, but you can't realistically make a lot of money this way: the opponents don't have too much money, so the stakes are not exorbitant. Generally, you can hope for around dozen groshen for a few-minutes round.

Where to play dice in Kingdom Come? 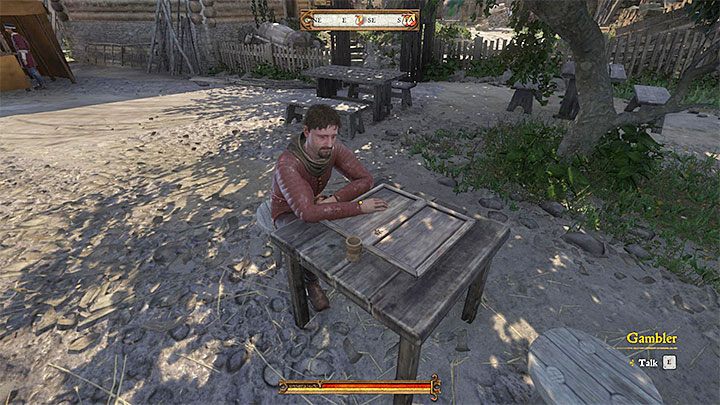 The gamblers only appear in taverns that are marked with a pint of beer icon on the world map. Sometimes you'll be able to play dice in side quests, but in such cases, a game of dice is only a way of completing mission objectives. Real gambling only takes place in taverns.

Every tavern has a special dice table. If anyone is sitting there, Henry can play dice with them - otherwise you'll have to wait. Before the game, you can place your bet - you cannot bet more than 100 groshen, but in reality, the opponents will offer a lot less.

You play with dice and a cup. Before the game, you can choose to use special dice, which will make it easier to win, but only if you have them in your inventory. Each of these cheater dice has its own properties - for example, if you have three daemonic dice (Lu, Ci and Fer), you're sure to hit three sixes. The non-standard dice can be obtained from beggars met during your travels (the Traveler random event); they can also be awarded for finishing some quests (such as Next to Godliness in Rattay) or directly from locked treasure chests.

The players decide whether or not they want to use non-standard dice before each game. The game doesn't coerce you to cheating, so you might just as well try your luck with a regular set of dice. The game sort of gives you the consent to cheat in dice, since the NPCs never react to using cheating dice. 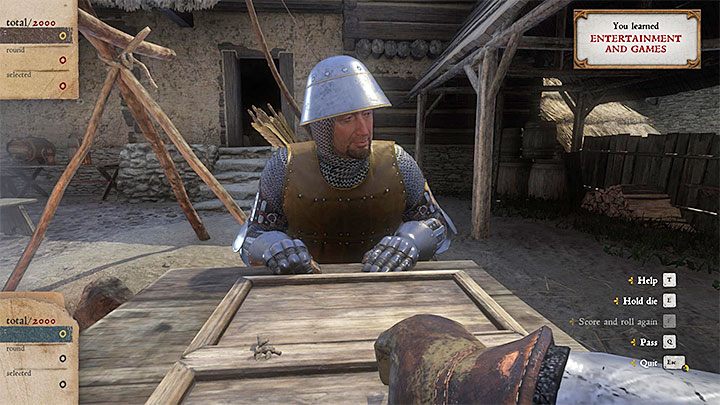 The game is divided into rounds, in which players cast dice in turns. Henry always makes the first move, which also makes the game easier. By default, each game lasts until someone reaches 2000 points (the requirements may change if it's a special game, like in a quest). Whoever manages to reach the threshold first, wins.

After the game begins and the dice are cast, you have to decide which dice you want to save and put on the side, and which you want to cast again. The next move is only possible when:

At least three dice have the same value.

If, after the first round none of the above requirements is met, it's called a bust - the game is finished and you loose all points.

You choose the dice with the cursor make the key decision: either throw again, or pass the round to have all of the points from the round transferred to your total score. That's a very important moment - only the total score counts in the end. A correctly played round ends with the points being transferred to the scoreboard - otherwise, you bust and loose all the rounds' points.

If, by any chance, you manage to take every single dice off the table, even in a couple moves, you can always repeat the round with the same set of dice - the points scored in this manner will of course be transferred to the leaderboard. The opponent can do the same.

Here's the value of dice:

The game calculates the score after you choose the dice, hence you yourself decide how many points you get in a round. If there are five ones on the table, but you only select one, you will get 100 points. If you select two, you will 200 points, but three will yield only 1000 points. This is a vital part of the game - remember this. Also remember that the dice you've previously put aside are not counted for your current score. Only the dice that are on the table after the last cast count!

A game ends when someone reaches 2000 points. The scoreboard score is also considered - not the score gathered for dice casts.

How to win in dice? 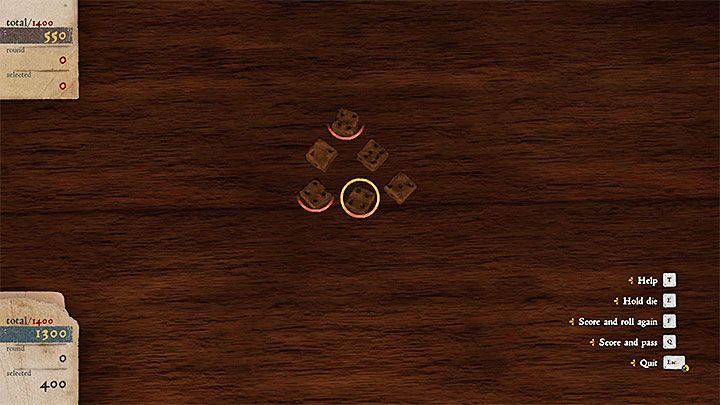 Although it might be tempting to try to get the best score possible, and the bonus cast of all dice in a round seems like a great idea to get points, the main principle of the game is - PLAY CAREFULLY.

More advanced combinations are rather rare (unless you're cheating), so you'd better put at least one dice on the side after each throw (preferably a "one"; otherwise a "five") and play on. If you manage to get at least a combination of 3, then select all three dice plus any other scoring ones (ones and fives) put them on the side to save the score, and pass the round.

Why? It turns out that if you steadily gather smaller amounts of points, you can be much more certain about winning than when you try to binge as many points as possible in a single round. The opponents tend to overestimate their abilities - hence they often waste even a certain victory. The opponents are also prone to busts, trying to get points with a single dice, which often ends with them loosing the entire round's worth of points. Don't make the same mistake. If you have two dice left in your cup, just pass. Save the score and wait for the next round. 9 times out of 10 this will let you win; if you have cheating dice, there's virtually no way to loose.

To complete the Gambler trophy, you need to win 1000 groshen playing dice, which requires playing at least around twenty games. As you roam the land, don't hesitate to visit taverns and try to find opponents. That will let you complete the achievement reasonably soon, without grinding this single minigame.

You can check your progress in gathering gold for games of dice in the Player screen in the Statistics tab. Also note that losing a game of dice doesn't subtract the gold from your "achievement pool". It matters not, so you can loose all you want.