This chapter contains numerous tips that can help you during exploration of the world of Kingdom Come: Deliverance and interactions with its characters. Read this chapter to save your time and avoid any potential problems. 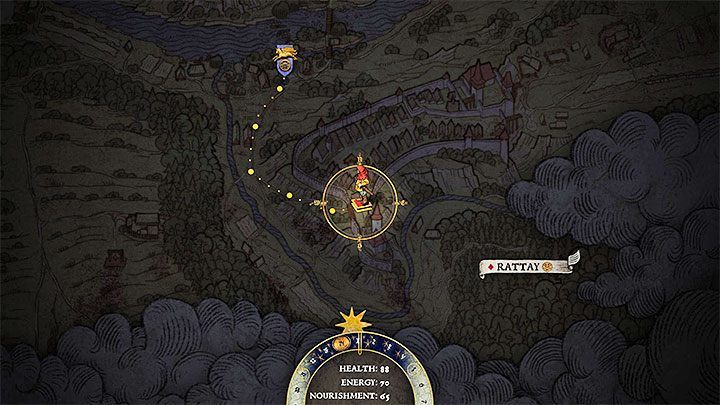 Initially, the entire map is covered in "fog of war". This means that you have to discover all locations yourself. Stick to the main road when you are visiting a new region for the first time. Thanks to that you will be able to reach villages, camps, forts, castles and other important locations fast. You should also remember that not every location is filled with friendly NPCs. You should always be very careful because, e.g. you can be surrounded by enemies right after entering an unknown location.

Near the majority of large locations, you discovered there are quick travel points. You can select them from the world map and move faster to selected spots. It's possible only if you're within the reach of selected quick travel point. The flow of time will speed up while Henry's figure moves through the world map. This means that you can reach the target after a few or more than a dozen of hours. The travel can be suddenly interrupted, for example when you are hunted by guards who managed to catch up with you. The game can make you decide whether you want to investigate a random event or ignore it/try to flee. Just keep in mind that it's much easier to ignore random encounters when e.g. you come across a neutral character than bandits preying on the weak.

Note - The game won't let you use fast travel if your hero is overburdened (move heavy objects into your horse's inventory), if you are currently fighting with someone (or you are running away from enemies and you didn't lose them yet) or you are inside of a building (go outside and stand in an open field). 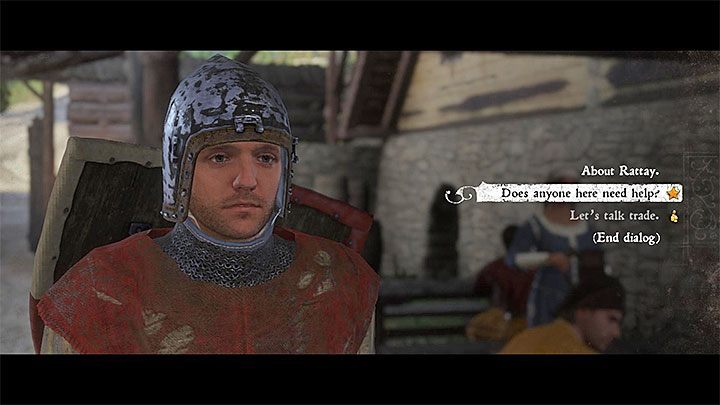 Icons that represent important quest characters are added to your map by exploring the world.

They are divided into three groups:

Open your journal and check your currently active quests. This marks locations and characters connected with that quest on your map. Descriptions of available side quests are in a separate chapter.

Important - some side quests can have a time limit, for example when you must help a wounded person or quickly hunt someone. Don't postpone completing them as this might cause additional trouble or in some cases even cancel the quest.

Note - Some quests can only be unlocked after completing other quests beforehand. For example, you helped an NPC - that person will want to meet with Henry in the later part of the game. Some quests can also become available once you reach a certain point of the game. Check the world map regularly to see if there are new stars that symbolize new quests. 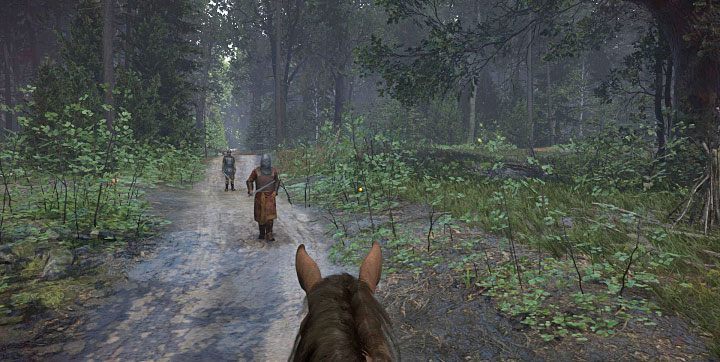 Random encounters can happen when you travel between locations. These events can have positive or negative results. The main hero can, e.g. meet a friendly merchant or be attacked by a group of bandits. Try to save your game whenever you see a person or a group of people in the distance. Thanks to that you can avoid problems when, e.g. you did something wrong or your hero was attacked and received serious wounds or when he died.

Remember - if you use fast travel, it can be more difficult to avoid bandits on roads. Keep that in mind and try to avoid this method if Henry is weak or you have not saved your game for a long time.

Note - You can check out random encounters if you really want to increase your Stealth (knocking down an NPC) or if you want to have a fight. The area located north from the mill in Rattay is a good place for that. This is one of the places where the game spawns random encounters (a traveler, a mercenary who fights for money, a knight etc.). If a given encounter isn't to your liking simply leave this place and go back here after some time. The game should pick a different encounter. 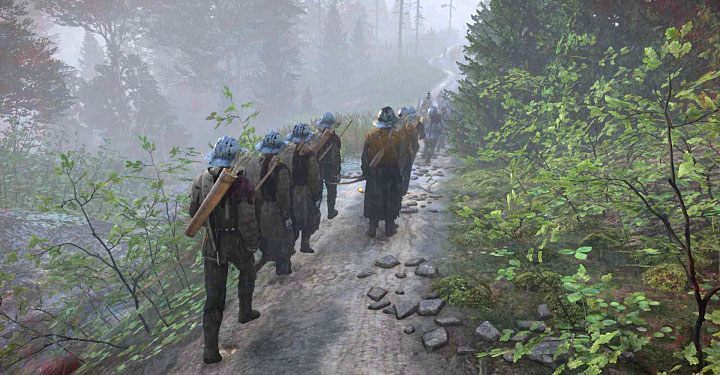 There are no companions in Kingdom Come: Deliverance. You can only get temporary allies when you are doing certain quests but they won't accompany you throughout the entire game. Try to avoid attacking characters who joined you (or an entire group which happens in some quests where you have to participate in bigger battles) and keep these characters alive. Their death doesn't equal game over but it can fail a quest or worsen your relations with a given group or even an entire village. 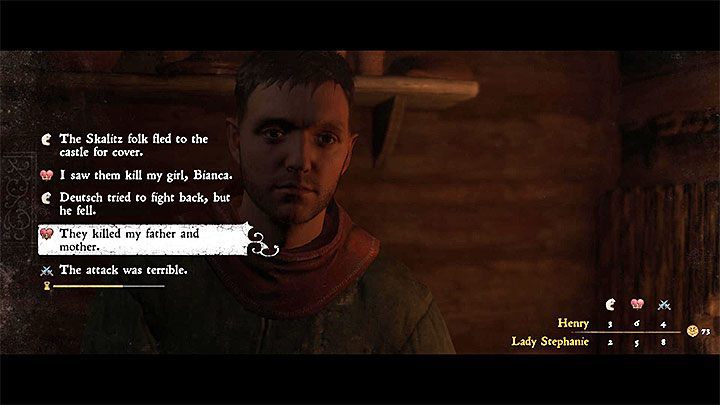 In some conversations you can use unique dialogue options. If you successfully complete trials related to them, you might trigger alternative outcomes, for example avoid combat, gain additional information or receive a better reward. Dialogue options are split into four groups (in special cases additional groups might appear):

Besides that, you can get unique dialog lines connected to unlocked perks. For example, by having First Aid perk (connected to your main level) you can sometimes select a dialog line that allows you to show your medical knowledge or to offer your help in healing someone.

A failure attempt at using one of the unique dialogue options usually has no negative consequences, but in some situations it might worsen the relations with the talker or make it impossible to speak with him again. If it's possible, you should create automatic or manual saves before each important conversation - just in case it didn't go as you thought it would. 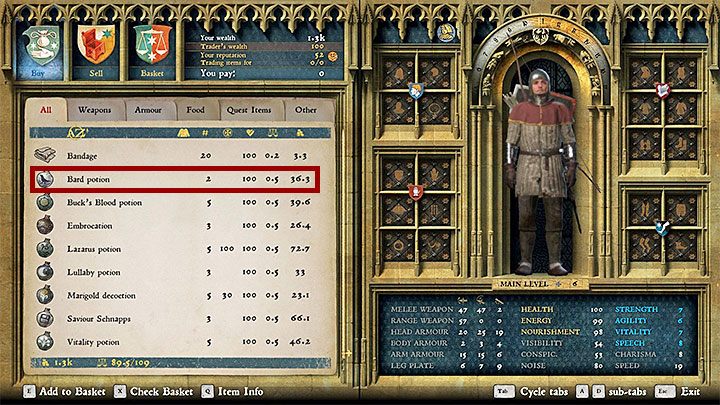 It is important to know that the game allows you to increase your Speech for a certain period of time. Thanks to that your persuasion, intimidation or impress will have a greater chance to succeed. This can be achieved by drinking a Bard Potion. It increases your Speech by 5 points for 10 minutes. The potion can be acquired in three different ways:

Breaking the law and potential consequences 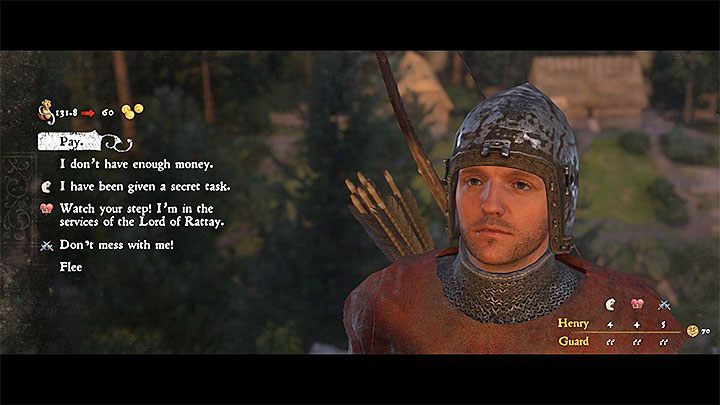 Additional note - Sometimes, when you are travelling through Rattay or any of the bigger towns, you can be stopped by a guard who will want to search your inventory. This can happen even if you didn't steal anything. Your refusal or escape is treated as an act of breaking the law. You can let him to search your inventory but all your stolen items will be confiscated (this also lowers your reputation). Alternatively, you can use persuasion or give a few Groschen to that guard so he will let you go. 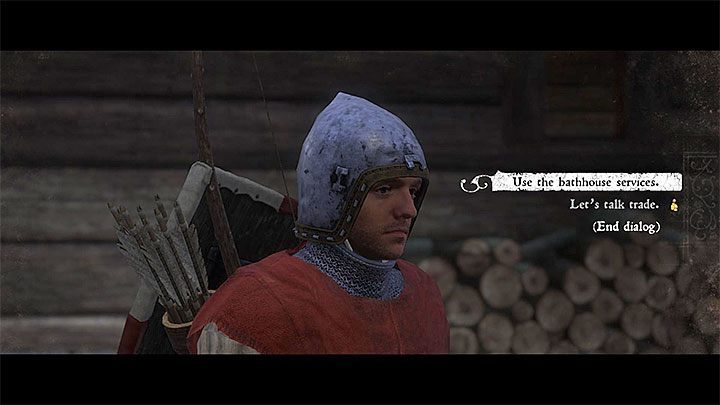 Charisma is one of the more important additional parameters in the game. It determines how the protagonist will be considered by non-playable characters. A character with high charisma has a greater chance for persuasion to succeed during a conversation. The most important factors that impact charisma level are:

Hygiene - when the protagonist is dirty or in blood, he might be considered as someone much worse by encountered NPCs. You can quickly wash by interacting with one of the water tanks, although regular visits at baths (they aren't free of charge) provide much better effects. Don't forget to frequently wash weapons if there are blood marks on them after a battle 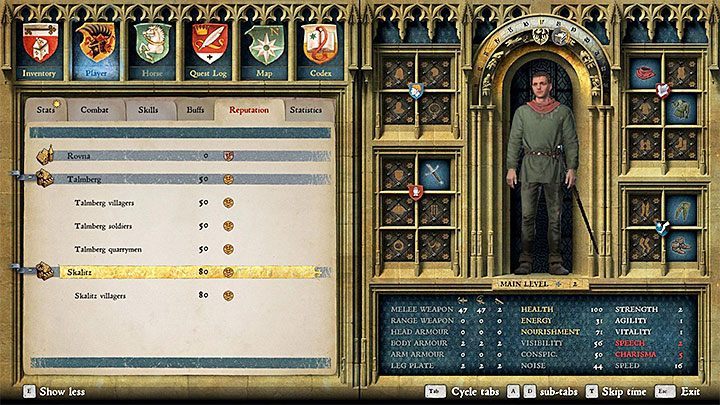 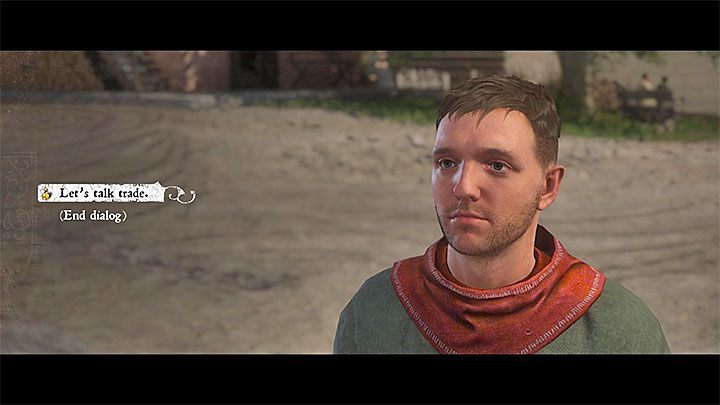 Traders can be found in almost all larger locations. They can sell you various goods or, e.g. they can specialize in selling weapons or herbs. Visit them regularly and sell useless items (especially the heavy ones). Be careful to not offer them any stolen items (they are marked with a special icon in your inventory). Try to always barter a little bit before you complete a transaction to get a better price.

Valuable advice - during the main storyline you will meet Miller Peshek (he lives near the city Rattay). You can sell him the goods you've stolen earlier. Keep in mind that you won't get any decent prices though. More millers can be found in the later part of the game. They also can buy stolen goods from you.