Activities are smaller side quests available in Kingdom Come: Deliverance (you can recognize them by exclamation marks on your map). Below you can find a list of activities available in Rattay and near the town (Henry reaches that place after completing Homecoming main quest).

How to unlock: Speak with Woyzeck in Kohelnitz. 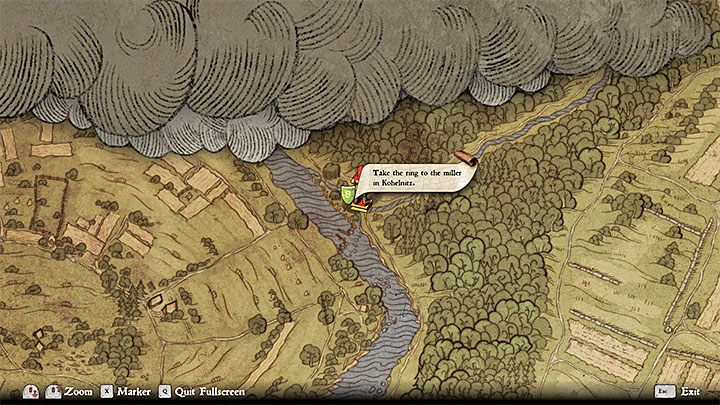 Kohelnitz is located north from Rattay. This small farm is presented in the picture above. Miller Peshek can send you there if you have managed to get the ring during The Good Thief side quest. That item must be delivered to Woyzeck in Kohelnitz. The miller is happy with your work. From now on you can sell him stolen items and receive "the thieves' guild" requests. 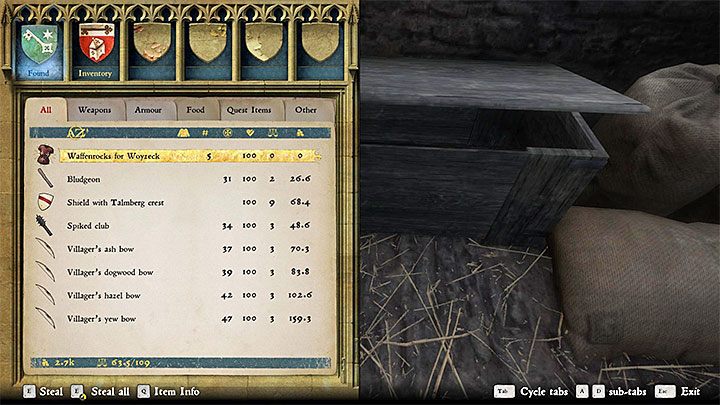 Henry must steal 5 waffenrocks from the Talmberg castle. You can steal the key from the guard marked by the game but this is very risky. Also, this person usually stays in the private part of the castle. Alternatively, you can rely on lockpicks but remember that the chest located in the armory has a high-level lock. Open it and take out waffenrocks (the picture). Go back to Woyzeck. You will receive 125 Groschen.

Request 2 - Steal a horse from the stable in Merhojed 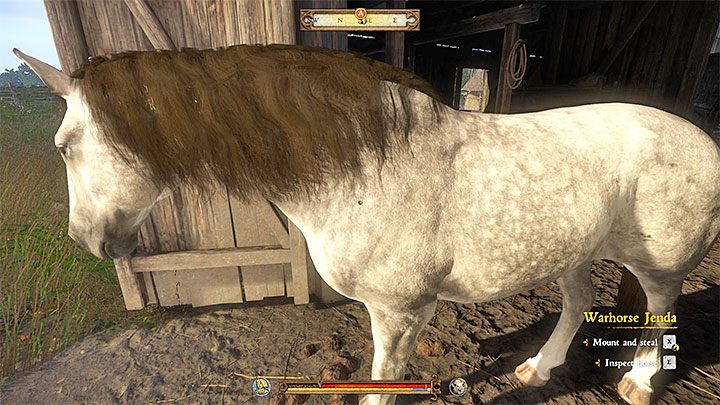 Reach the stable located in Merhojed. You can steal any of the horses but if you want to get the best reward then you should steal the most valuable one, e.g. Jenda (the picture). Be sure that there are no NPCs around you before you do anything. Get on the horse, jump over one of the small fences that surround the stable and reach Woyzeck. Try to remain undetected because this can lower your reputation in Merhojed. You will also become a target of its guards. You receive 200 Groschen.

Note - The delivered horse will get lost forever. Be sure that you don't want to buy it for yourself because you won't be able to do that after you deliver it to Woyzeck. 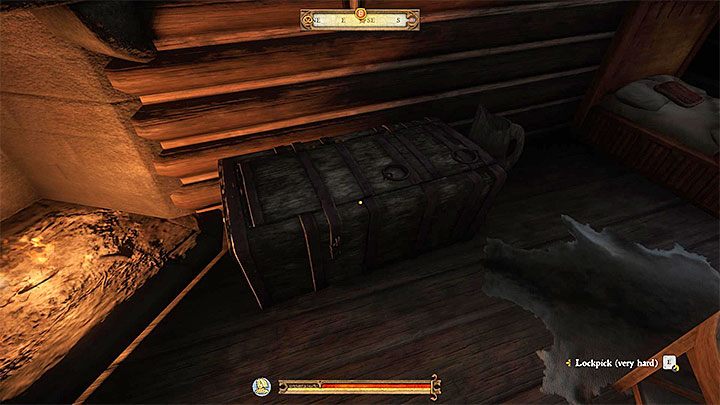 Head to Talmberg and reach the highest floor of the castle. Lady Stephanie's room is located at the end of the corridor, on the right. The best moment to steal from her is when the woman goes to pray or when she leaves her room to perform other activities. The jewelry is inside of the chest presented in the picture. Its lock has a very high level which means that you need to have a lot of points in Lockpicking (you can pickpocket Lady Stephanie to get a key). Collect the treasure and go back to Woyzeck. You receive a little bit of Groschen.

How to unlock: Speak with Peshek in his farm located in Rattay.

Complete The Good Thief side quest and deliver the ring to Woyzeck in Kohelnitz before you speak with Peshek. From now on you can receive "the thieves' guild" requests.

Request 1 - Steal the ring from the bath house 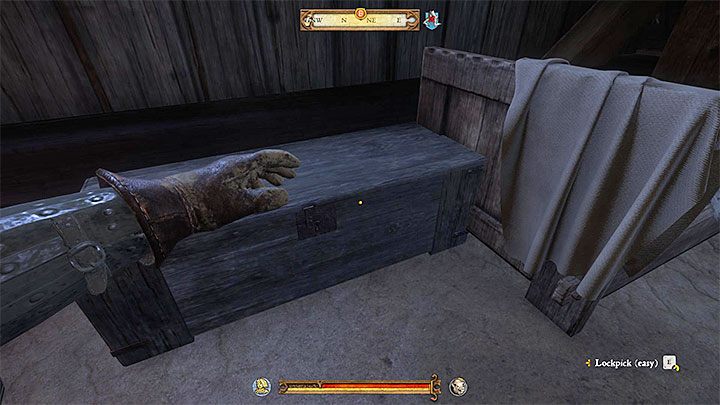 You have to reach the bath house located near Peshek's farm. Sneak on the first floor of the main building. The Ring from the baths is inside the chest presented in the picture. Its lock's level is easy but watch out - you don't want to get caught by someone. First off, you should check the stairs and the adjacent room on the upper floor. You can also decide to sneak into the bath house at night when everyone goes to sleep. Bring the ring to Peshek and receive 55 Groschen. 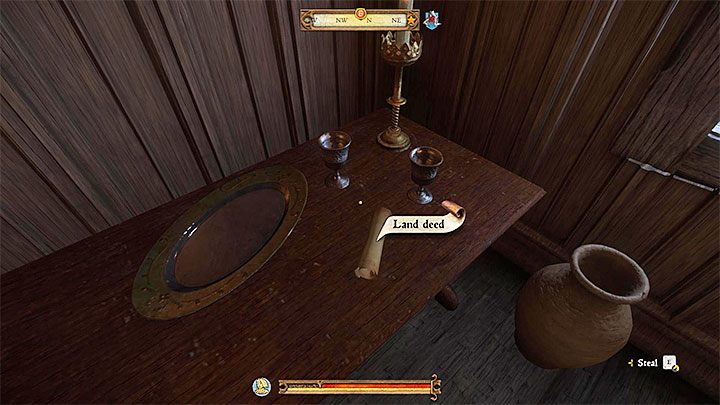 Rattay's rathaus is located right next to the market. The entire floor of the building is off-limits. You can break inside by using lockpicks on doors (all of them are secured with, at least, a high-level lock) or you can find Bailiff and pickpocket him to get the key. Land deed lies on the table inside one of the rooms (see the picture). Bring it to Peshek and receive 75 Groschen.

Request 3 - Steal a book from the Upper Castle 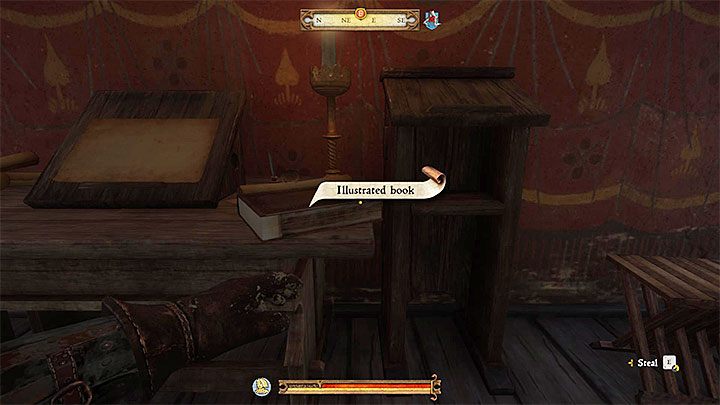 You have to reach the Upper Castle. Go up the stairs that lead on the floor. The Illustrated Book is located in Hanush's private chamber. Wait for the guard to leave (or stun him), quickly get inside the room and find the book (see the picture). Go back to Peshek and receive 225 Groschen.

How to unlock: Speak with Milan in Rattay. 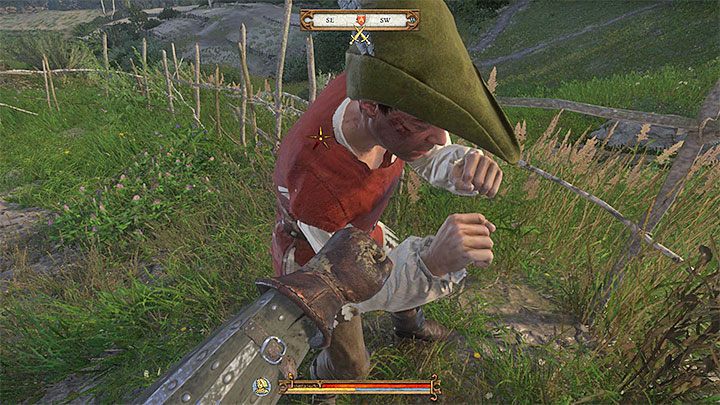 Milan can be found walking around the town. You learn that he participates in fights for money. Defeat two beggars from Rattay before you will be able to challenge him.

Every time you challenge someone the game moves you on a small arena near Rattay. The fights are without any weapons so remember to have your Unarmed skill at a decent level. This quest is also a good opportunity to level up this ability. Pay 2 Groschen before each fight. After winning you can search your opponent's pockets and take out valuable items (including several dozens of Groschen). Milan's defeat completes this quest (in his inventory you can find, e.g. keys to his house and chest). You can keep challenging him to develop your Unarmed skill. 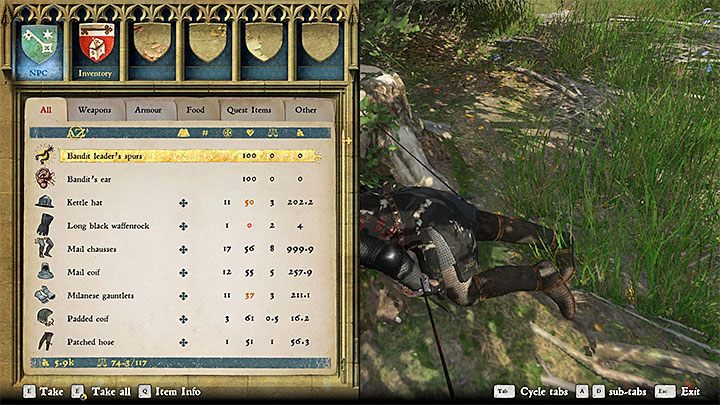 How to unlock: Speak with captain Bernard in Rattay or in Neuhof.

Meet with captain Bernard in Rattay (you can find him near the training arena) or in Neuhof if you are currently doing The Hunt Begins main quest or other related quests. Ask Bernard about a job and you might get this quest. It consists in reaching subsequent camps of bandits. Each time Henry's task is to eliminate the coat of arms.

If you get to the mentioned camp during a day means that you will have to fight with the entire group - this can be a huge challenge for a weaker hero. An alternate way is to sneak into the camp and either stun or kill your enemies with a dagger (requires Stealth Kill perk).

Take Bandit leader's spurs as an evidence that you have succeeded every in defeating him (see the picture). You can also receive a bonus for each "regular" bandit that you have managed to kill. Here, Henry needs to use a dagger to cut off Bandit's ear. After every journey go back to Bernard and receive your gold.

After you get rid of all the coats of arms selected by Captain Bernard, you can go to Talmberg and pick up a similar quest Raiders from the commander Sir Robard. The execution of all orders for Robard will unlock another quest Interlopers, in which, at the request of the repairer from the Sasau Monastery you have to eliminate bandits in the vincinity of Sasau.

How to unlock: Speak with Alex in Rattay. 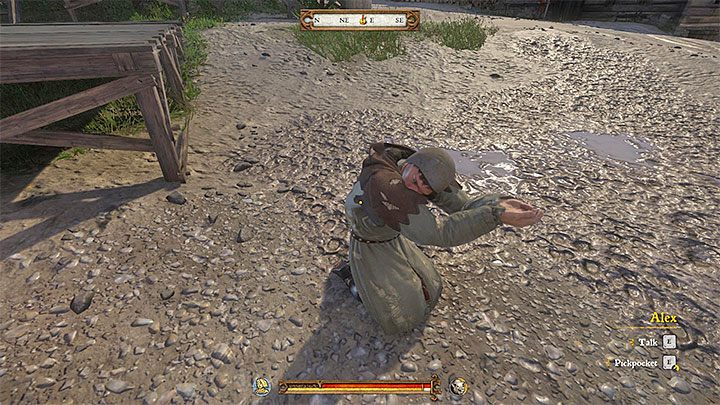 Alex is one of the beggars in Rattay. He usually stays in the market located in the center of the town. You can promise your help to provide him with different types of meat (rabbit meat, venison, lepiotas etc.). You can go hunting and use the bow to successfully kill wild animals, or look at the meat from traders (if you're very keen to pass this activity).

Rob the Rich, Give to the Poor

How to unlock: Speak with Vagabond in Rattay. 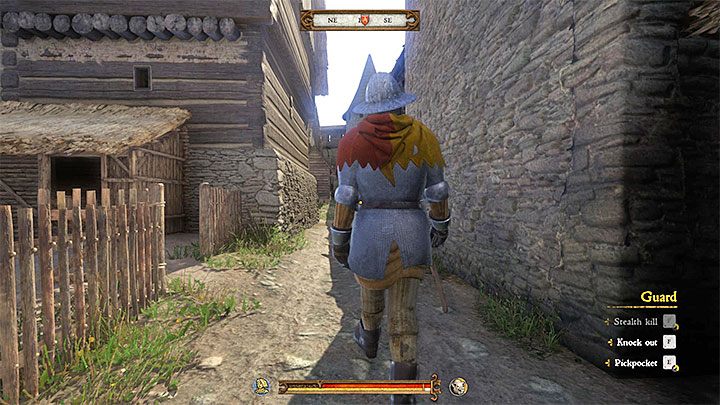 Vagabond is one of the Rattay's refugees. You can find him in the refugee camp or while you are walking around the town. You can receive tasks from him to steal different people. You will be most interested in this quest after you have developed pickpocketing and sneaking skills. He wants you to rob one of the guards in the town. You can agree to do that but stealing from guards (the picture) won't be easy. Guards are vigilant and they are usually accompanied by other NPCs (you can also try to sneak on one of them during a night). Steal 50 Groschen and go back to Vagabond.

There is an alternate way of completing this quest - you can give him 50 Groschen during your first conversation with Vagabond.