Cold Steel, Hot Blood and Family Values are the titles of two side quest related to the main plot of Kingdom Come: Deliverance. In order to complete these quests, it will be necessary to deal with hostile reinforcements heading towards Talmberg and to defend the trebuchet from enemies planning to destroy it. Fortunately, Henry will be accompanied by his allies in all the battles. A certain enrichment of the second quest on this page is the possibility to question the arrested Eric. 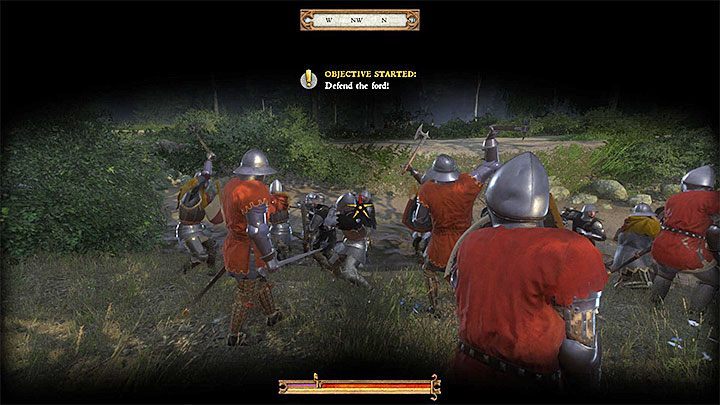 This task will start after you contribute to the construction of the trebuchet in the main quest Siege (recruitment of Conrad Kyeser as part of a separate Rocketer task). The quest begins with a linear conversation with Sir Divish. Make sure you are prepared for the battle (your hero is healed and has no equipment in a poor condition) and go to the place of planned ambush to the north-west of the camp.

After watching a cutscene and receiving an order to defend, the battle will begin. This battle is very similar to many of the previous ones. It is best to look for opportunities to attack those enemies who are currently fighting with Henry's allies. Surprise these enemies with attacks from flanks or from the back. If you suddenly find yourself in the "center of interest" of an enemy, it is best to escape. There are very few chances that he will start to chase Henry. Instead, he will most probably resume attacking other characters.

Note - If you want to finish the game without killing other people (for the Full of Grace trophy) then either don't engage in fighting at all or attack your opponents with your fists alone, so that in the worst case they will be deprived of consciousness.

After winning the first battle, go to the place where you should help Hanush and his people. Fighting tactics do not change in this location - look for easy victims or don't engage in any battles. 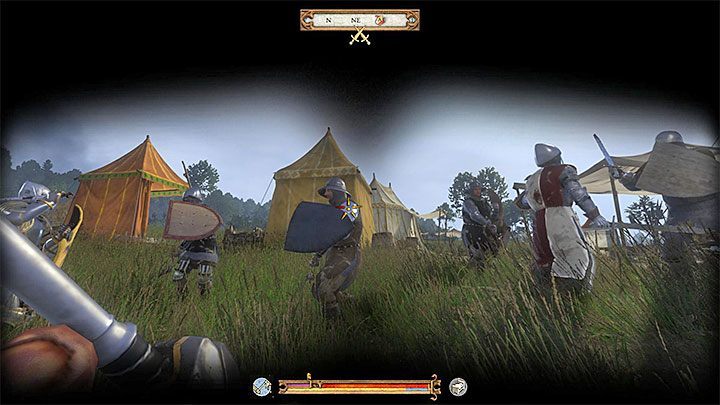 Immediately, after the beginning of a new quest, the game will assign you a goal to defend the trebuchet, which hostile army wants to destroy. Go towards the camp on a hill. It is best to travel in the company of allies, so that in case of encountering enemy forces, Henry will not be in great danger. When you reach the nearby the trebuchet, help your allies to get rid of your enemies or wait in a safe place to finish the fighting. You will receive 575 groschen for the survival of the battle. 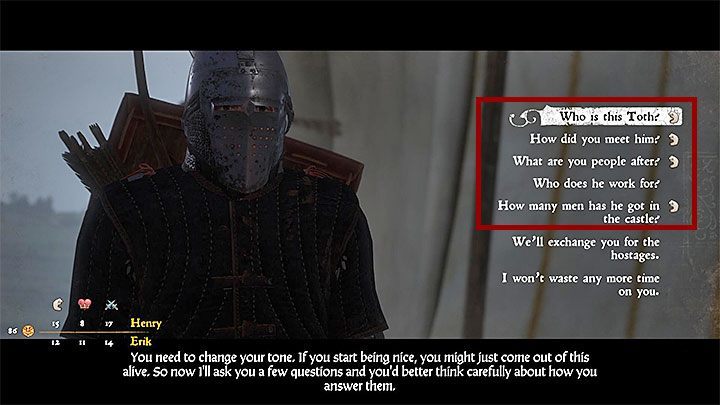 You can take the opportunity to renew your strength and repair your equipment. Once the preparation is complete, enter the marked tent. There is an opportunity to question Erik's apprehended detainee. It's worth to concentrate during this interrogation because you can unlock Freud trophy here. This is only granted if you successfully complete four attempts to use the persuasion dialog boxes (these questions are indicated in the screenshot above). They will be successful only in case if Henry has at least 13 points of persuasion. If your hero has fewer points of persuasion, consider buying a bard potion that increases Speech for a certain period of time (visit any apothecary). The failure in these attempts at persuasion will not lead to any unfavorable outcome, but will only deprive you of the chance to earn a trophy.

The end of the conversation with Erik will complete the whole quest. You will receive a total of 450 groschen and the new main mission will begin - An Oath is an Oath.