On this page of our Desperados 3 guide, we have included the second part of the walkthrough for Mission 16 - The Old and the New. This part is the most complex, as you need to cross the entire map to reach the cemetery gates and the chapel behind it. From our walkthrough, you will learn how to cross the left and right parts of the canyon.

Our walkthrough of Mission 16 contains references to the map in the world atlas, which can be found on the first page of this chapter. For example, the designation (M16,5) indicates that you should find a blue point numbered 5 on the map for Mission 16.

Getting to the chapel - general information 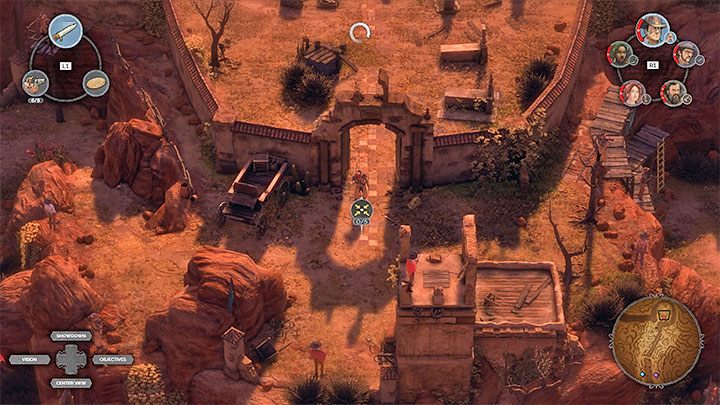 Crossing the left side of the canyon 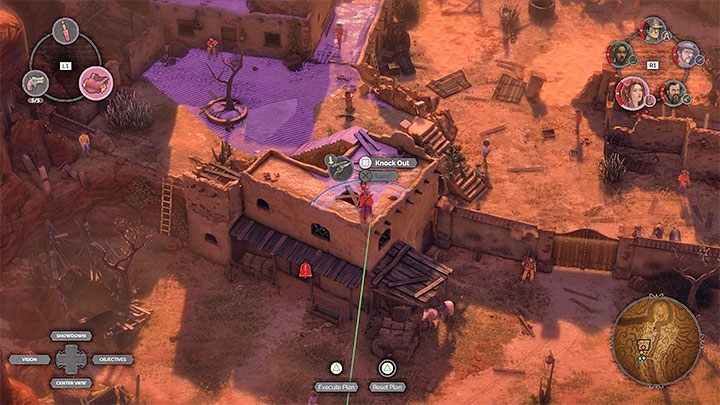 Crossing the left part of the map involves passing through the town, which can be divided into three main parts. The first part of the town (M16,7) is an area you should still remember from the prologue. Pay particular attention to the Long Coat that guards the entrance gate - be sure to avoid him while controlling Kate.

There are two main paths to choose from. The first involves taking out enemies from the left side of the gate, which is guarded by the Long Coat. Use Kate's flirting here, but unfortunately you'll also encounter women who are immune to her charms. In such cases, rely on other methods, such as throwing perfume. One by one, get rid of your enemies by relying on the cooperation of the whole team. 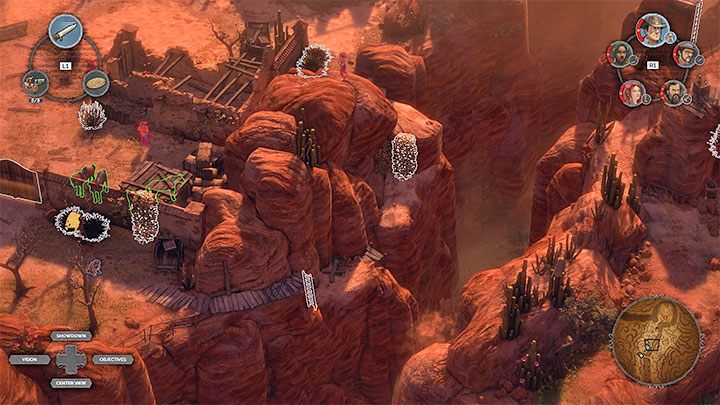 The second option is a path near the cliff, which is to the right of the gate. First of all, you have to watch out for a single sentry. If you got rid of the Long Coat already, you can easily kill him. Otherwise, distract or temporarily blind him.

Send Cooper (or Isabelle if she made it to the left side of the canyon) along this path (and its next fragment in the second part of the town) as you'll encounter vines along the way that Hector or Kate cannot climb. 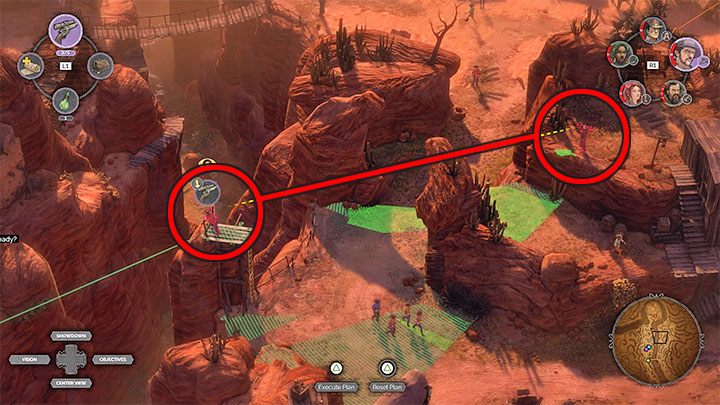 Before you go further, take a look at the sniper shown in the picture (M16,8). He stands on a tower on the right side of the canyon, but his viewcone is directed towards the left side of the canyon. The best way to get rid of him is to make a long-range shot with McCoy. Before you fire a shot, activate the viewcone of a Long Coat from a nearby hill (M16,14). Shoot the sniper the moment Long Coat doesn't look in his direction. We do not advise skipping this step, otherwise you will have additional complications when securing the other parts of the town. 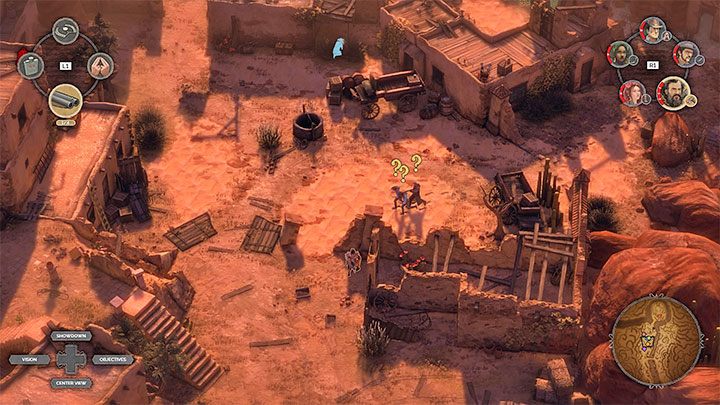 In the second part of the town (M16,9) the most problematic is the new 3-man patrol led by a Long Coat. The route of this patrol resembles a square. You can (and should) take advantage of the fact that once the patrol moves past your location, you have a few seconds before it returns to the area.

In addition to the standard methods, you can also leave footprints in the sand. This also works on the patrol, and may be a good idea if you're planning to eliminate them with Hector's sawed-off shotgun. There is also a cargo to be dropped in the second part of the town, but it is in a very visible place and on the roof, which is not easy to reach. It may therefore be too difficult to use it. 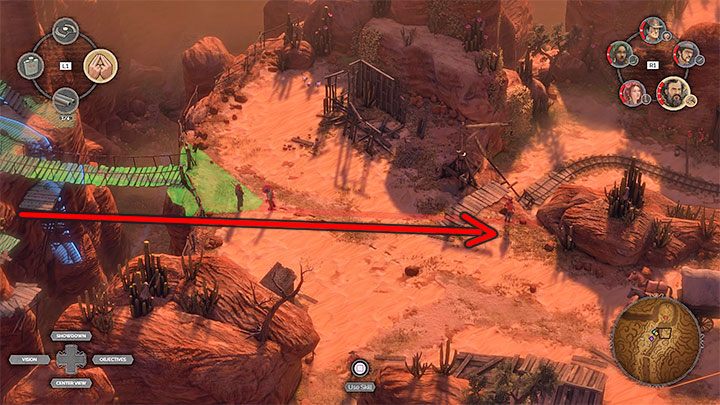 Also in the second part of town, you can walk by the cliff, and again this is a good choice for Cooper and Isabelle. The area is also worth visiting with the remaining team members. There are two reasons for this approach: 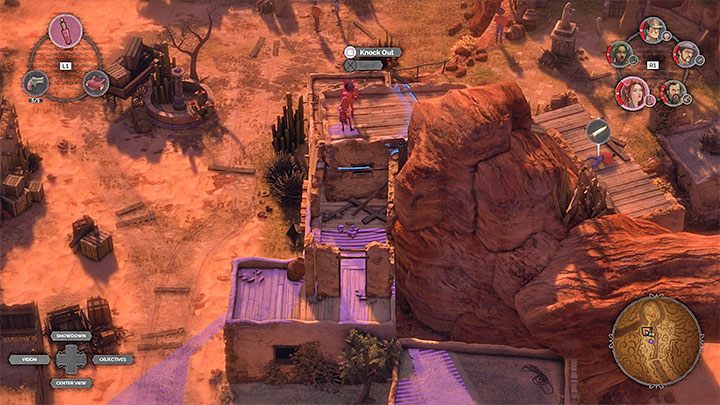 Using remaining characters, try to draw away individual enemies and help each other on a regular basis by whistling, coin tossing, and Isabelle's cat. Some enemies can also be more easily caught or disoriented if you have reached this location from the side of the location with the cannon. 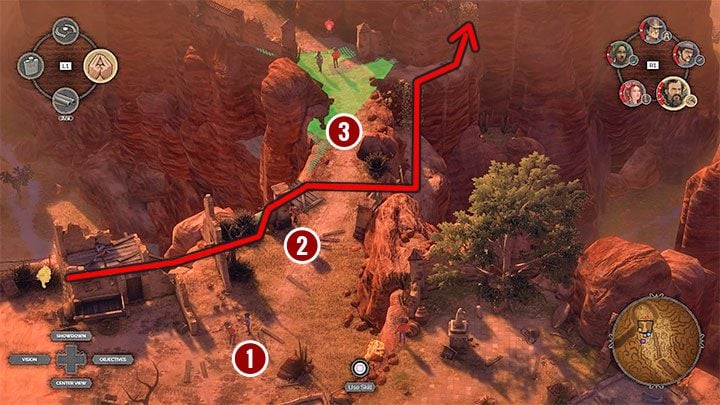 Going through the left part of the map will lead you to the left path leading to the cemetery (M16,17). Crossing it is unfortunately difficult because it is very well guarded. We advise you to proceed through this path with Cooper or Isabelle.

Crossing the right side of the canyon 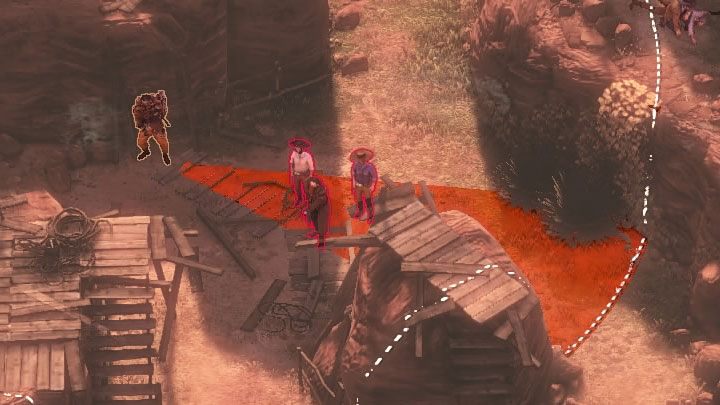 Crossing the right side of the canyon begins by having to cross a small ravine (M16,13). The most serious threat associated with this location is a three-man patrol traveling down the ravine - this is one of the patrols led by a Long Coat. You can approach the situation in two different ways: 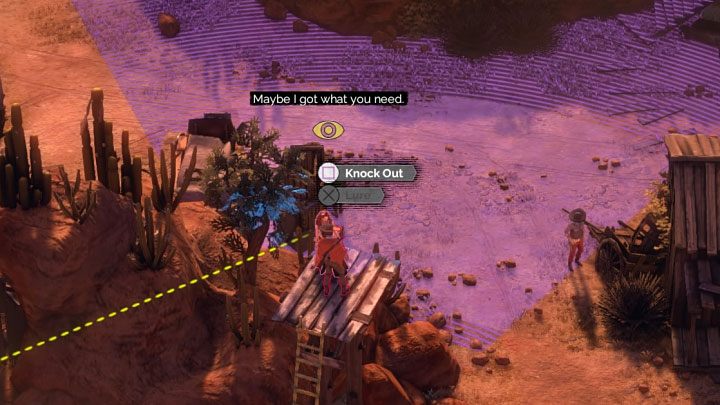 Regardless of whether you've took on the three-man patrol or not, focus on distracting, leading away, and eliminating enemies standing on either side of the ravine. McCoy with his sniper rifle can help in eliminating some of the remote targets, especially as there is ammunition in the vicinity of the ravine.

If you can bring Kate to the right side of the canyon, use her to distract the opponent from the mini-tower shown in the picture at the other end of the ravine. Don't use the sniper rifle to eliminate this sentry, as he is in the viewcones of the enemies north of here. 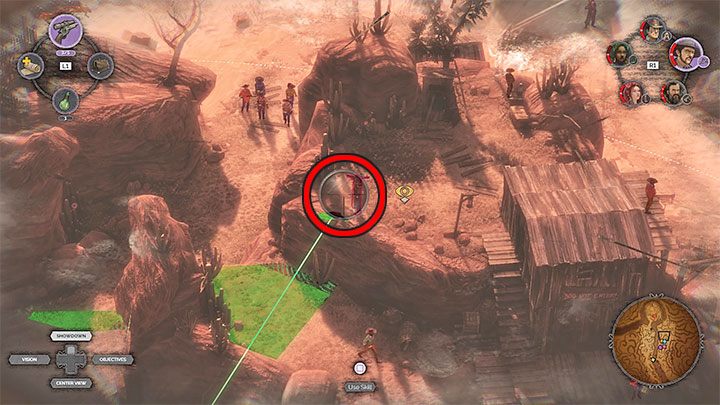 Another major area on the right side of the canyon is a large hill (M16,14). Here are the top 3 tips related to this location: 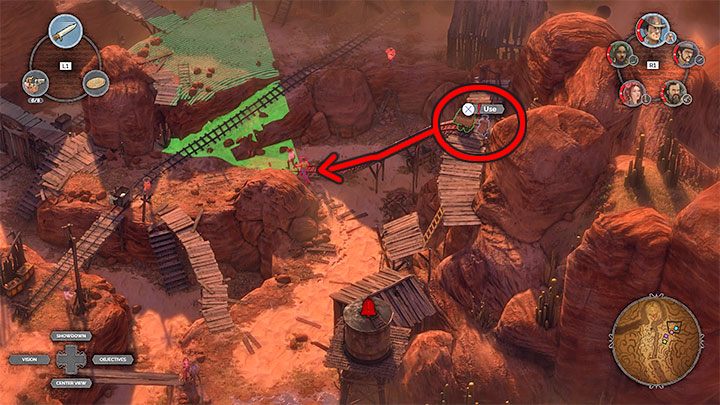 Keep moving north. In the next area, Kate and her ability to flirt with opponents will prove very helpful. When attempting to distract enemies, however, look out for the Long Coat on the left and avoid being detected by him.

It would be good to send a single member of the team further north. Continue traveling by the right edge of the map and try to reach the marked mining wagon (M16,15). You can push it down - wait with that action until there's a two-man patrol in its course. Use Showdown Mode to eliminate further enemies, but make sure if attacked opponents aren't in the viewcones of other enemies. 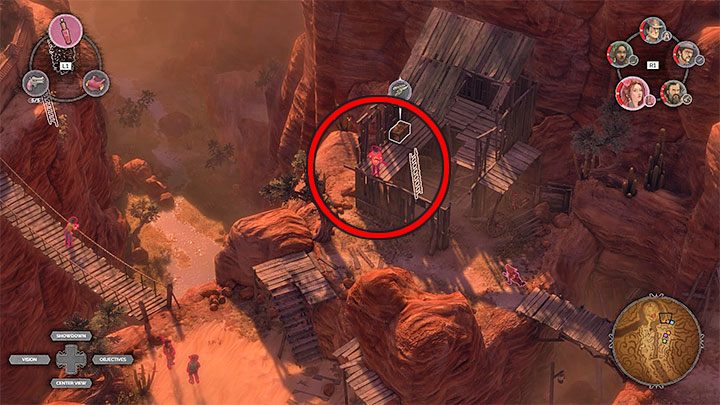 During the crossing, pay attention to the sniper position marked in the picture (M16,16). If you want to kill the sniper at a distance, do so while the opponent from a nearby bridge is looking the other way. Alternatively, you can go there and, after diverting the sniper's attention, reach the same place with another character so that you can eliminate him in hand-to-hand combat.

Lead McCoy to the cleared sniper nest. You'll find ammunition for the sniper rifle, while the position enables you to hit many enemies that are near the entrance to the cemetery. 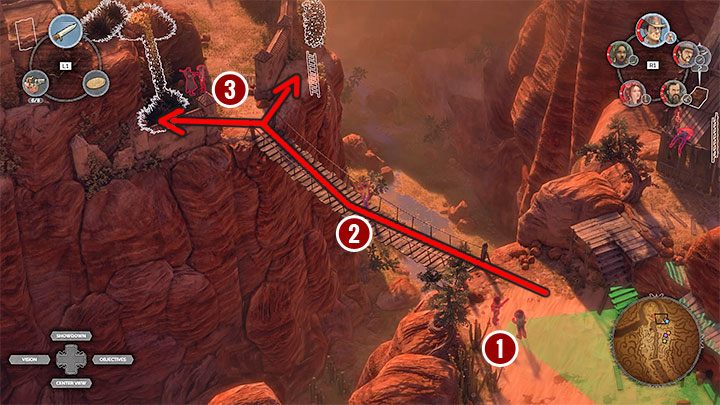 Passing through the right side of the map will lead you to the right path leading to the cemetery (M16,18). It is not as demanding as the left path, but it is still a more difficult zone than the previous ones.

Bringing the whole team to the graveyard gate 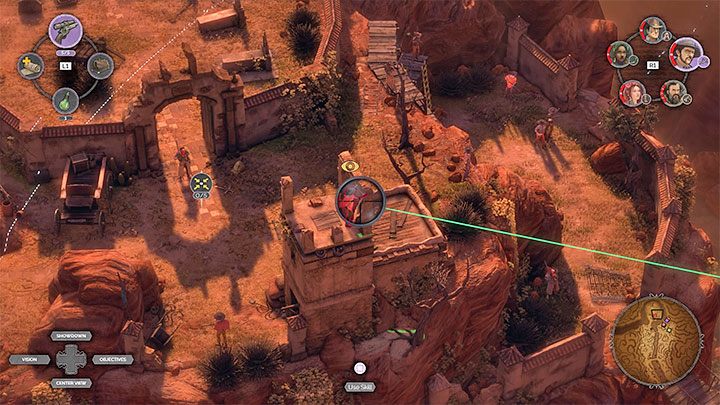 Regardless of whether you chose the left or the right path, at least one hero should be near the cemetery gate (M16,21). Start clearing this area with McCoy's sniper rifle - kill the sniper standing on the tower near the cemetery (M16,19). Shooting him with a sniper rifle should not be noted by any other enemy. 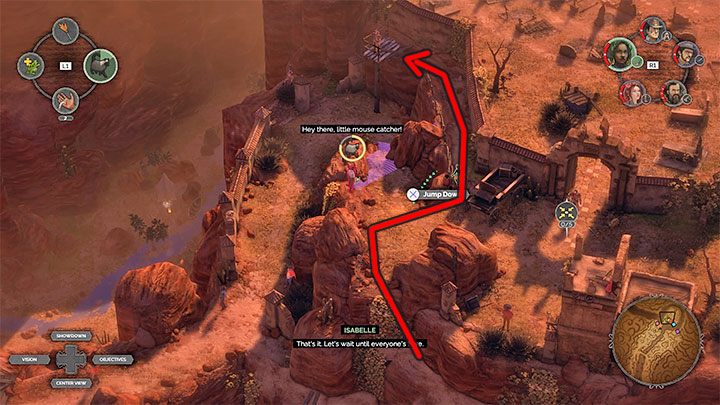 Getting rid of opponents from the area to the left of the entrance to the cemetery (M16,20) is more difficult because there are two Long Coat opponents here. Follow the route marked by the red line (screenshot above) and distract the regular sentry along the way. This way, you can approach the Long Coat from the outermost vantage point. Try to hit him with a bullet fired by McCoy and then quickly finish him with a hero who is nearby. Do so only after the standard opponent is distracted again, and when enemies from the lower level do not look at the Long Coat.

Fall back and attack Long Coat in a similar way - hit him with a sniper rifle and kill him with a second hero. 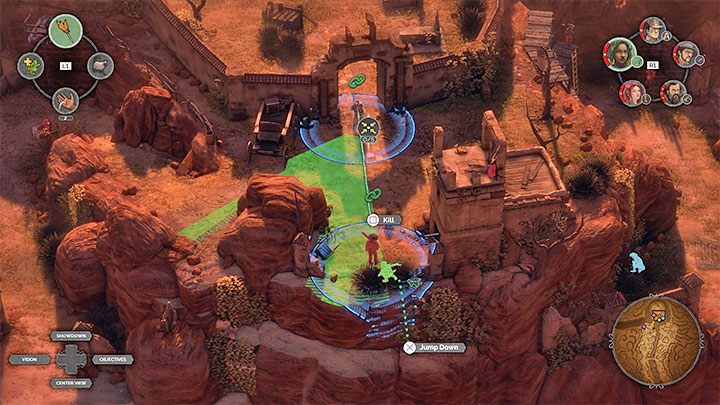 Dealing with two opponents guarding the entrance to the cemetery is easy - use Isabelle's Connection and then sneak in from behind to the poncho-wearing opponent. It won't kill the Long Coat right away, but he will kneel down, and you can finish him up with any hero. 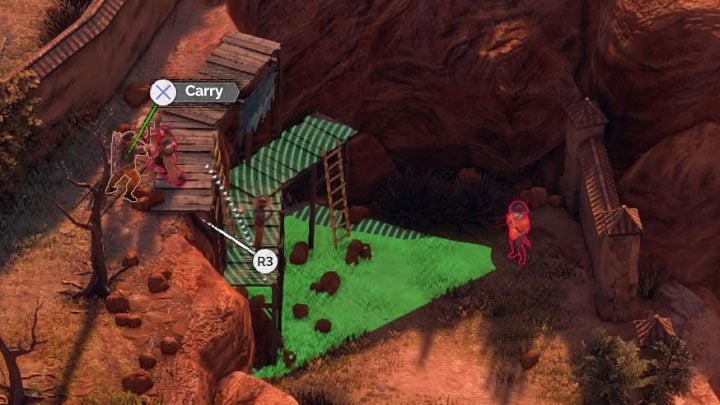 If you also need to secure the area to the right of the cemetery gate, start with the local Long Coat first. You can attack him with Hector or you can hit him with a sniper rifle and kill him with a second character. Perform this attack when the opponent from the lower scaffolding does not look towards the Long Coat. Then get rid of 2 ordinary enemies by using Connect.

All 5 heroes must reach the cemetery gate (M16,21). This leads to a cut-scene that begins the final confrontation with Frank and his men (M16,1).