On this page of the Desperados 3 game guide, you can find the third part of the walkthrough description of Mission 15 - A Captain of Industry. In our solution you will find a description of the preparations to stun Devitt and a list of the best options for rendering Devitt unconscious after sneaking into the antagonist's vicinity.

Our walkthrough of Mission 15 contains references to the map in the world atlas, which can be found on the first page of this chapter. For example, the designation (M15,5) indicates that you should find the blue point no. 5 on the mission 15 map. 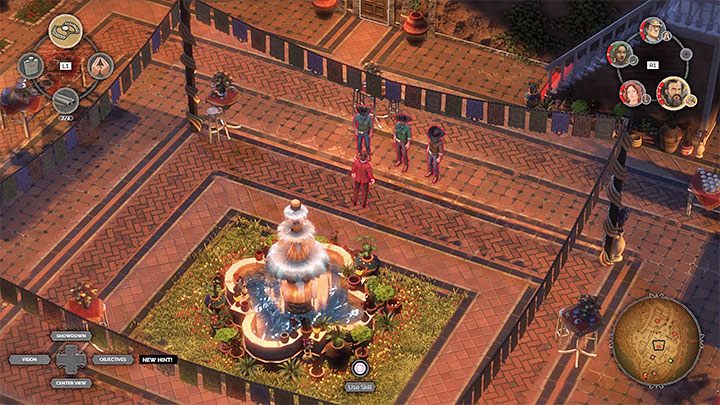 Devitt is in the mansion's inner courtyard (M15,1) since the start of the mission, but initially getting to it would be extremely difficult as there are plenty of guests invited to the party. Your team can "encourage" the guests to go to other areas of the Hacienda, i.e. to the place where fireworks are set off (M15,6)(M15,8) and to the place where a large bulb is lit (M15,16).

Devitt begins to question his subordinates in the courtyard from the moment he is" pulled away." Unfortunately, it will still be difficult to reach him, as nearby guards and servants remain on site. As a result, you're going to have to make a lot of preparations before you decide to stun and kidnap Devitt.

Getting rid of enemies from the upper levels 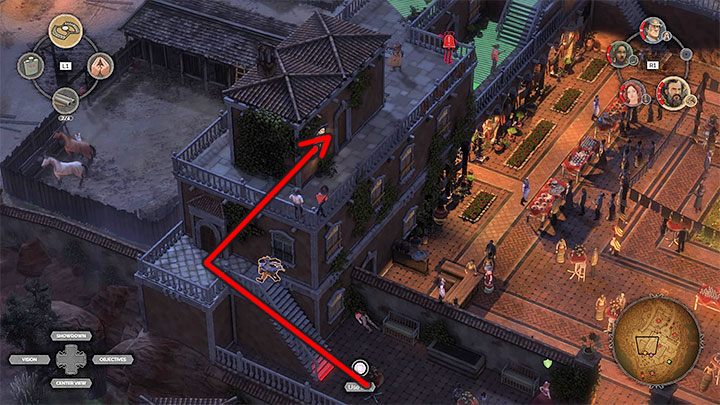 The main problem is that the courtyard where Devitt is staying is watched by opponents from nearby balconies (M15, 19). They're the ones you need to take care of first because they have an excellent view of the courtyard.

The best way to reach the upper levels of the building is to use a door at one of the corners of the property (M15,17). By the time you get there, you'll have to deal with opponents passing by in ponchos. Alternatively, you can choose vines next to the side entrance to the back gardens (M15,18) (this is a good option for Isabelle) and climb the vines next to the front balcony (M15,7) - in the latter case, watch out for 2 enemies on the top roof of the building (M15, 8). 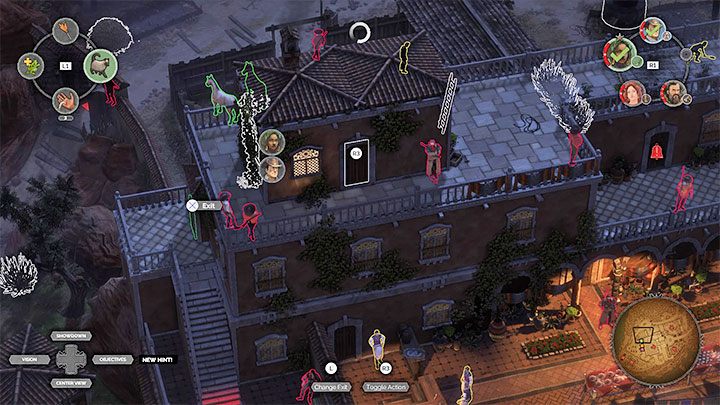 There are three large groups of opponents residing on the upper levels of the property (M15,19) to be eliminated. The first group includes the Long Coat. The problem is that he travels on different parts of the balconies.

Help yourself by combining Isabelle and Kate's perfume to eliminate opponents from those parts of the roof where the Long Coat is currently not. To get rid of Long Coat, Of course, bring Sanchez in. 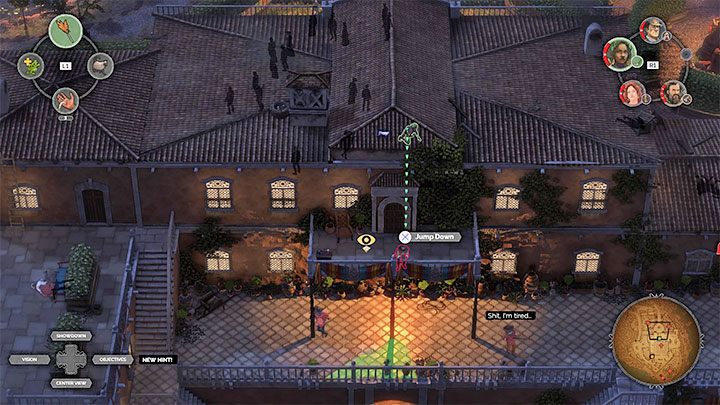 The second group is located directly above the entrance to the inner courtyard. You can easily jump off the top roof (M15,8) on a single opponent. Still, watch out for 2 enemies just on the main roof - bypass them or eliminate them in a team attack. Two more enemies stand on the lower large balcony. Take your time to eliminate them, as their visual fields may overlap with some of the first and third group and Devitt himself (you can temporarily blind him with Kate's perfume).

A Long Coat with a lantern also appears in this area. Wait for a good moment to jump Hector off the main roof, so he will die seamlessly. 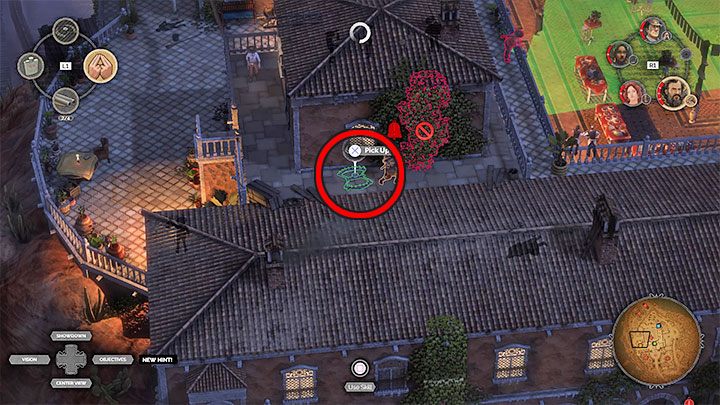 The third group is on the upper levels in the part of the property closest to the cliff. Also in this case it is very advisable to approach opponents from the side of the main roof (M15,8).

The screenshot above shows the perfect place to draw away ordinary opponents - set up your wnics here and use the whistling option. You can kill up to 3-4 enemies in this way. Come from behind an opponent in a poncho leaning against a railing and surprise a traveller in the long coat area. In the end, you'll be left with a few "motionless" enemies - you can distract them by whistling or help yourself by connecting and sneaking up on them.

Ridding the enemies of the courtyard and kidnapping Devitt 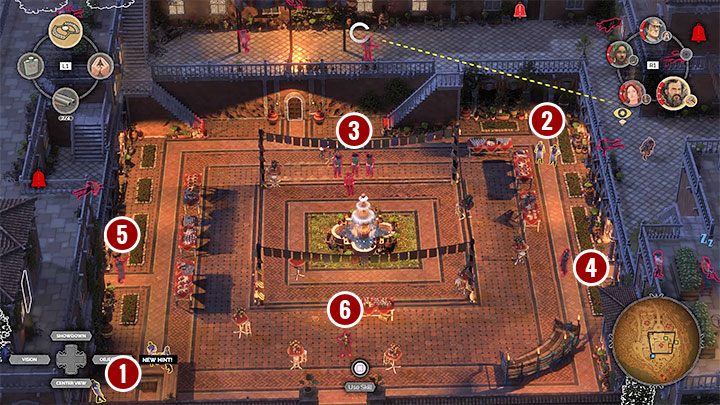 Ultimately, you should have a situation where no opponent facing the main courtyard (M15,19) is present on the upper levels (M15,19). You can start planning an attack on Devitt, and before you stun the mission target, take care of the following things: 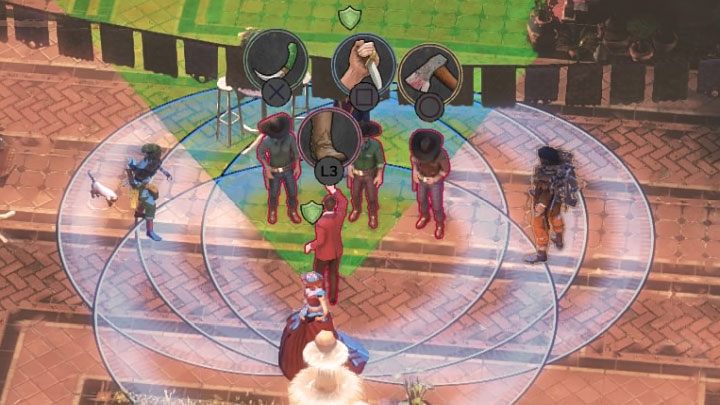 After doing the above, it is time to stun and kidnap Devitt. You can do this in two main ways.:

OPTION 1 involves the entire team. Get close to Devitt and his three subordinates. Set each team member against a different enemy figure-Cooper and Kate in the middle, and Isabelle and Hector on the sides. Plan in Showdown mode to stun / kill Sentry and stun Devitt-each team member should have a different target selected. You can tie the stunned Devitt up now.

OPTION 2 involves mainly Isabelle. Sneak a hero into the vicinity of Devitt, but hide in a good place (e.g. behind the fountain) to avoid being detected. Use mind control to start controlling Devitt. He distances himself from his three subordinates, stun him and tie him up.