Our walkthrough of Mission 15 contains references to the map in the world atlas, which can be found on the first page of this chapter. For example, the designation (M15,5) indicates that you should find the blue point no. 5 on the mission 15 map. 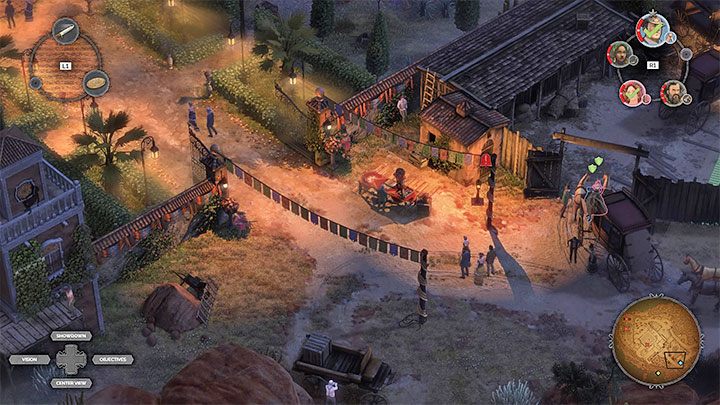 Fireworks in the maze 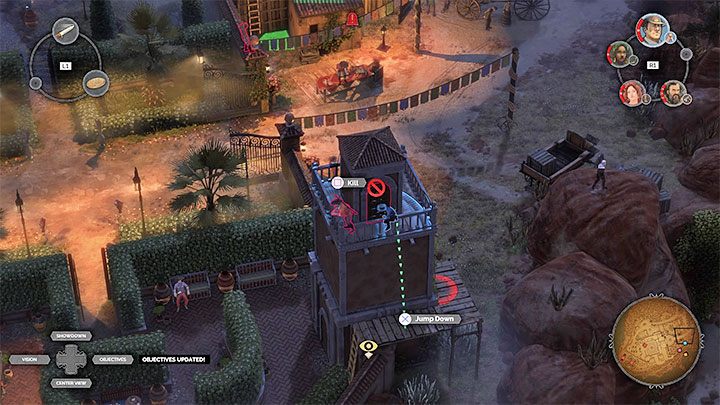 The fireworks box is located in the central part of the small maze (M15,6). Before you even decide to start eliminating or distracting characters from the maze, you should first take care of getting rid of enemies watching the area from higher levels.

The first location worth investigating is a small tower next to the maze (M15, 4). You can climb it using a ladder. Still, wait for a good time. Get rid of an opponent on the lower balcony of the tower and another observing the surroundings from the top of the tower. 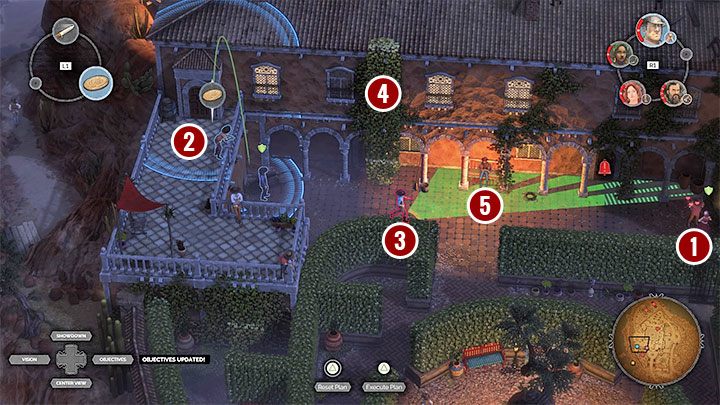 The second location is more problematic - it is the balcony at the rear of the property (M15,7). First of all, getting on the balcony without being noticed can be problematic. Use Kate to make opponent 1 from the screenshot above turn around. Use the Cooper's coin to distract opponent 2 when guard 3 goes to the right. You can climb vines 4 now.

You can't immediately start attacking enemies from the balcony, because a gunslinger 5 sitting on a bench looks out over the balcony every now and then. Hide on the other side of the hedge and blind her several times with perfume.

Remember the roof of the mansion for later (M15, 8), as it will make it easier for you in the later stages of the mission to travel around different parts of the Hacienda and surprise other enemies from lower levels. Many other paths also lead to the roof. 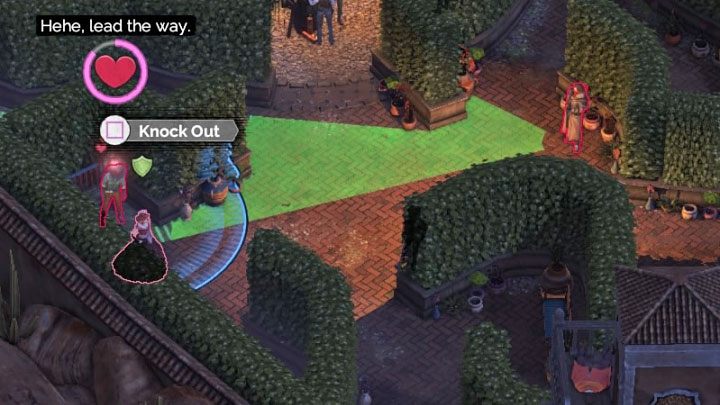 After securing the tower and balcony, you can deal with eliminating characters in the maze. There is a Long Coat, but he does not expose the characters in disguise. Still, Kate and Cooper must avoid attacking the Long Coat, as they cannot kill or stun him without raising the alarm.

Rely mostly on Kate's flirting to distract "ordinary" enemies and distract those in ponchos. You can hide bodies behind hedges, but choose locations that no one visits. A pair of civilians also travel around the garden - it's best to wait for them to sit on a bench and knock them both down, tie them up and hide them. 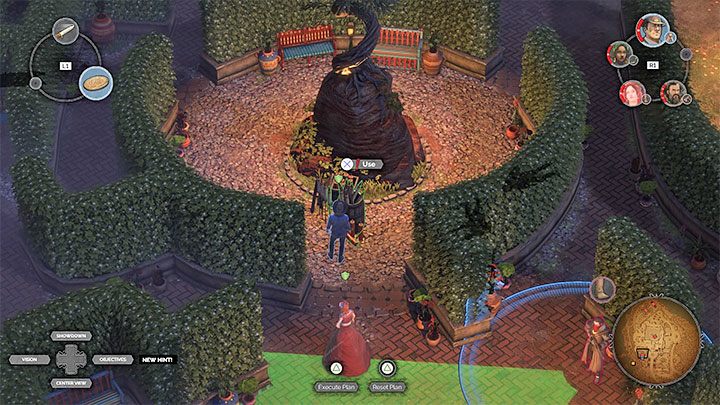 Finally, leave your opponents in the immediate vicinity of the fireworks box. Eliminate them one at a time and have Long coat's field of view attached so no attack can be made when he looks that way.

Interact with the firework box - it takes a few seconds to set them off and during that time no one can look in their direction (both guards and civilians). Setting the fireworks off will draw some of the party guests away from the central courtyard (M15,10).

Fireworks in the front garden 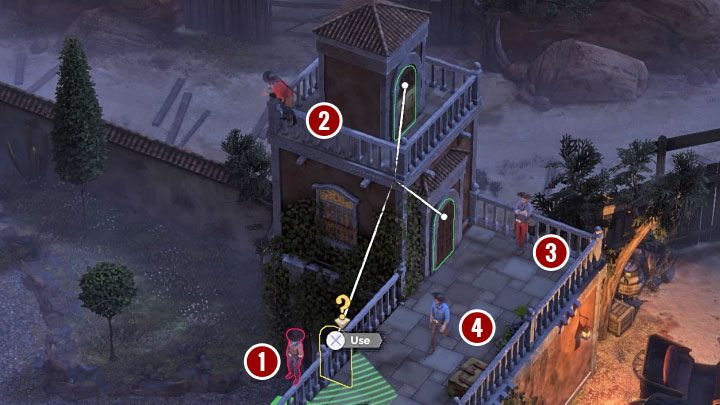 The fireworks box is located by the bridge in the front garden of the Hacienda (M15,8). Before you even decide to start eliminating or distracting characters from your front garden, you should first take care of getting rid of enemies from two adjacent locations.

The first location worth investigating is a small tower next to the front garden (M15, 4). Use Kate to distract opponent 1 shown in the screenshot. At the same time, enter the tower with Cooper and get rid of opponent 2 from the top of the tower. Wait for the bandits talking to each other downstairs to go their separate ways - jump on opponent 3 and kill opponent 4 before he notices his companion's death. You can kill bandit 1 as well but make sure no one in the garden notices the attack. 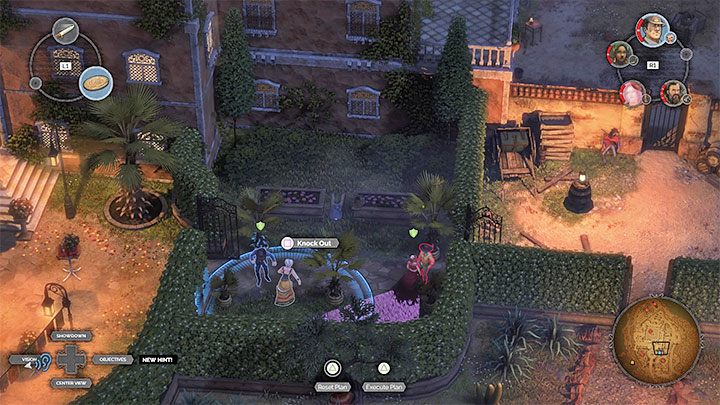 The second location you should secure is the area at the back of the garden next to the property. Make Kate flirt with a sentry showing up in the area with civilians. This allows Cooper to stun those individuals and tie them up.

In an adjacent area, there are two sentries and one of the enemies with a light on. Wait for the enemies to disperse and get rid of them one at a time. Also, make an attack when the opponent's long Coat from the garden is not facing this way.

Long Coata may be concerned about the disappearance of the characters he dated. Hide well the bodies of enemies from the locations with the kerosene lamp.{/ramkaniebieska} 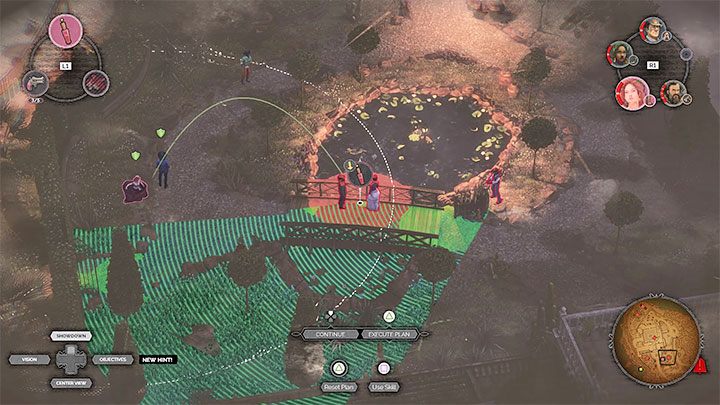 Once the tower and rear area are secured, you can eliminate the characters in the front garden. The garden is patrolled primarily by a Long Coat but he does not expose the characters in disguise. Still, Kate and Cooper must avoid attacking the Long Coat, as they cannot kill or stun him without raising the alarm.

Perform all attacks as Long Coat goes the other way. Eliminating local bandits might make it easier for you to use perfume to blind a pair of civilians standing on a bridge. 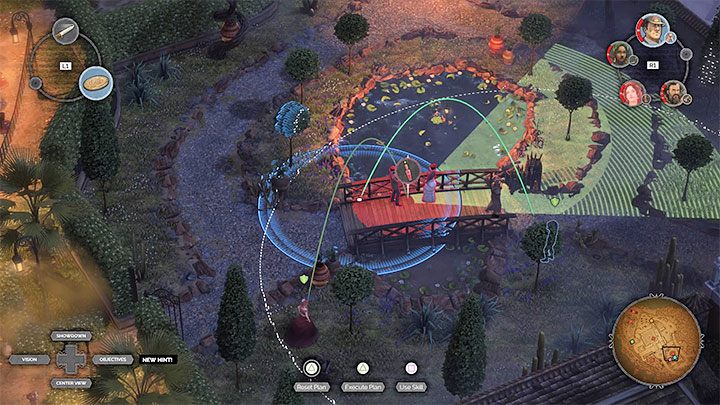 Don't set off the fireworks immediately after you've got rid of all the enemies except the Long Coat. One of the civilians on the bridge is facing a box of fireworks and can raise the alarm. Make the civilians turn to the left by flipping a coin and, to be sure, treat them with perfume.

Interact with the fireworks box - it takes a few seconds to set them off and during that time neither civilians nor Long Coat can catch the hero red-handed. Setting the fireworks off will draw some of the party guests away from the central courtyard (M15,10).