This page of the World Atlas for Desperados 3 includes a detailed map of Mission 15 - A Captain of Industry. The map shows all the important locations on the Devitt estate, which should make it easier to infiltrate the hacienda and travel around it. Later on this page, there are also the descriptions of all Mission 15 challenges, including pushing the statue onto the opponents and completing the mission without using Kate's and Cooper's skills.

The full description of Mission 15 walkthrough can be found on the following pages of this chapter. Our walkthrough also contains links and indications that refer to the map. For example, the designation (M15,5) indicates that you should find the blue point no. 5 on the mission 15 map.

Mission 15: Markings on the map

Mission 15 (A Captain of Industry) takes place on some of the larger maps in the game. The location of the action is a huge hacienda owned by Devitt and a party is held at the mansion as the mission begins. This means that in addition to Devitt's bodyguards, there are also a number of independent figures on the property, and their presence can significantly impede operations. This mission prohibits you from killing innocent people - this applies to both party guests and servants. But you don't need to avoid them at all costs. It is possible to stun civilians, but remember that the body of a bound civilian is not accidentally thrown into the abyss or thrown into the water.

Also, Devitt cannot be killed in this mission because the heroes have plans to kidnap the antagonist. The man will eventually have to be stun, tied up and delivered safely to the vehicle used to flee the property. Devitt usually resides in a public place - the inner courtyard where the main part of the party is held. The game will allow luck to distract guests m.in. by setting off fireworks. This will lead to a situation where only Devitt's bodyguards and servants will remain in the courtyard. It'll make it easier to stun him and kidnap him.

In this mission, the heroes are divided into two groups. Kate and Cooper operate in disguises and are able to travel freely around all public areas of the property including the courtyard, the gardens, or the labyrinth. Isabelle and Hector must operate from the shadows. The second pair will start the stage by the water. Sanchez and Isabelle will have to sneak into the property so they can start helping Cooper and Kate deal with their next opponents.

In Mission 15 there are 8 unlockable Badges. We have listed and explained them below. The challenges are initially hidden, although you can still unlock them during your first playthrough. 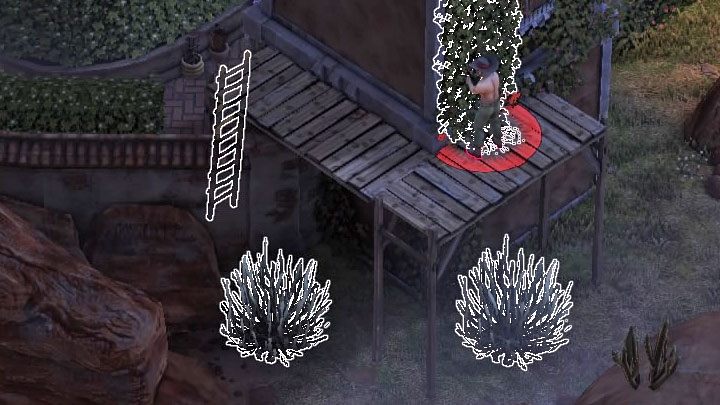 This challenge is best dealt with when repeating missions at a easy difficulty level, so you will not only play in lower settings, but also be able to keep track of your progress in meeting the badge requirements.

As often as possible, attach a backlight to objects in the area, as many bushes are in darker areas. This Badge also forces people to avoid burying bodies in bushes, of course. Look for opportunities to bury them inside buildings as well as throw corpses into the water. 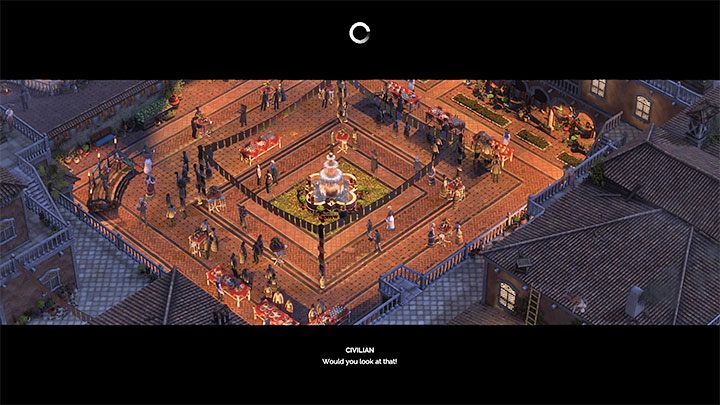 This is a difficult challenge that you will be interested in when repeating a mission at a easy difficulty level. This Badge regards the guests present at a party in the inner courtyard of the Hacienda (M15,10). Their presence makes it difficult to attack Devitt.

There are two ways to distract the guests and get some of them to leave the courtyard - setting off the fireworks in the maze (M15,6) or in the front garden (M15,8), as well as turning on the device (a large bulb) in the back garden (M15,16). To unlock the challenge, the game allows you to choose only one of the ways, i.e. some of the guests will stay in the inner courtyard. You will have to pull them away one at a time or try to avoid doing forbidden activities in their fields of vision.

This is another very demanding challenge, so don't tackle it until you start repeating the mission at your easy difficulty level.

You can't use a coin, a throwing knife, perfume, Kate's revolver or flirtation to win this challenge. This will make it significantly harder to get rid of and draw away some opponents. We advise you to rely much more on Isabelle and Hector after you lead both of these characters into the back gardens. Sanchez and Isabelle have no restrictions on their abilities.

Don't let anyone see you - Don't be seen by anyone

Also this challenge is to leave yourself to re-traverse the mission at the easy difficulty level, so you can keep up to date with whether you can still get it.

This badge does not warrant sneaking even in public places while Kate and Cooper are in control. You can't just lead to a situation where someone unmasks the characters or goes into a state of alarm. This also applies to situations where someone has been alerted for even a split second. Try to avoid risky attacks, such as killing opponents stunned with perfume or characters talking to each other based on Showdown Mode. 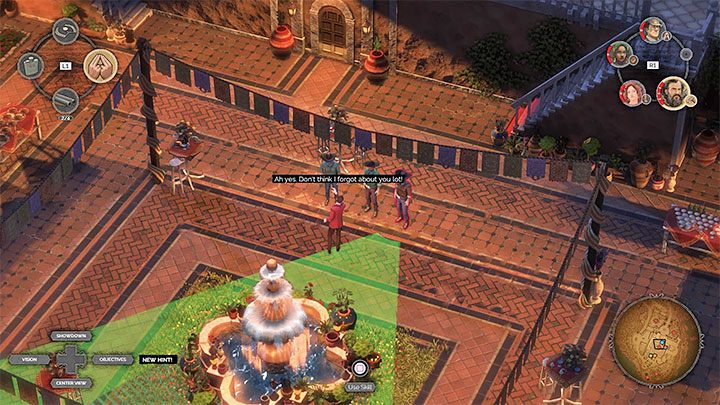 You will only get this challenge at the end of the mission after you manage to "drive away" the party guests from the inner courtyard of the Hacienda (M15,10) and after you eliminate all opponents watching Devitt from the surrounding balconies. Do not use all mind control skills in the earlier phases of the mission, as Isabelle cannot renew the number of activations of this skill.

Ultimately, you should bring the situation in the picture, i.e. that only Devitt and three of his subordinates will be in the courtyard. You can sneak into the courtyard and position yourself in a place where it won't be in the sight of any of your opponents. Only then do you use your mind-control skills. 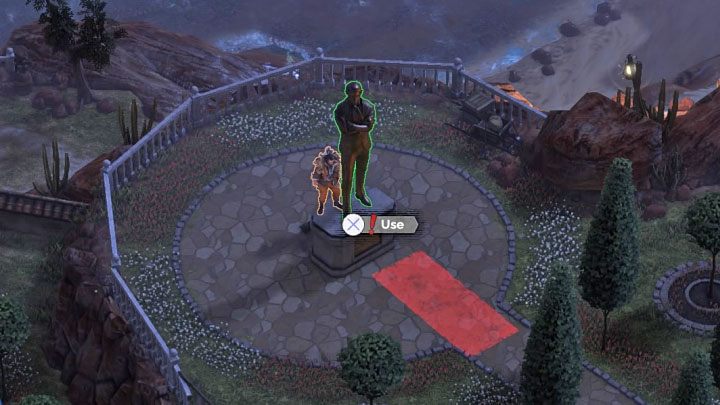 A large statue of Devitt can be found in the rear gardens of the estate (M15,15). When positioned behind the statue, a red rectangle will appear, symbolizing the area on which it falls.

At the statue, the opponent in the poncho and Long Coat should stop from time to time and there is a perfect opportunity to crush them. If you missed an opportunity and, for example, got rid of them in a different way then you can stun 2 of any other enemies, then tie them up and bring them to this place. After placing the bodies in a red rectangle, push the statue onto the enemies to crush them.

Speedrun: Complete the mission in under 22:00 minutes

Play on the east difficulty level in order to encounter less problematic opponents on the map. Also, enemy reactions will be a little bit slower.

Despite the time-trial, guests of the property were advised to distract themselves by using fireworks as well as a device from the back gardens, with only one of the two possible locations being "cleared" with fireworks. Later on, consider the riskier option of using mind control to pull Devitt away to some more secluded place.

This is the best choice when completing the mission for the first time, but playing on a high level of difficulty means having to deal with uncomfortably positioned opponents. Try to be very methodical especially when removing characters from the inner courtyard and surrounding balconies. There is a high risk that the person selected for elimination could be watched by even a few different characters - check this out before you take action. Fortunately, this challenge doesn't have a time limit, and you can save your progress freely.