On this page of our Desperados 3 guide you will find the second part of the walkthrough for Mission 14 - The Wages of Pain. This is the most important part of the stage. Separate sub-sections of our walkthrough explain how to block the railroad tracks by pushing a wagon and or by sending the cattle from the pen. 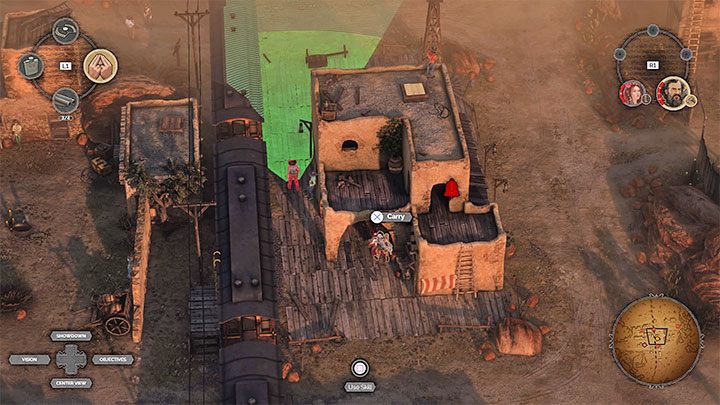 Your job is to block the railway tracks (M14,6) in order to stop one of the trains passing through. The game allows you to do this in two different ways - pushing the wagon (M14,4) or driving the cattle (M14,5). You don't have to visit both of these locations - you have to choose "only" one of them. Both variants are described in the following subsections of our walkthrough.

Regardless of the chosen option, it is a good idea to secure the railway station building (M14, 10). Attack the enemies on the ground floor whenever a train passes by. You can reach the sentry on the roof through a hatch in the building. Attack him only if there is no one looking at him. 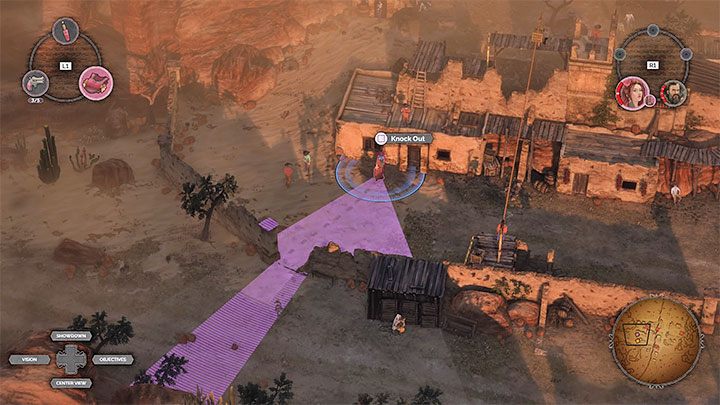 This variant involves reaching a wagon located in the town (M14,4) and using Hector to push it. This will not be easy, as you need to get rid of almost all opponents found near the wagon and its projected route.

Start by getting rid of as many enemies as possible stationed in the southern part of the village (M14,9). The standard enemies are the easiest, as they can be led to a secluded location by Kate. When it comes to other opponents, rely on whistling and flirting, both of which allow you to make poncho-wearing opponents look the other way. Try to get rid of most enemies from this area. Those standing on roofs and towers should be checked whether they are in the viewcones of more distant opponents. 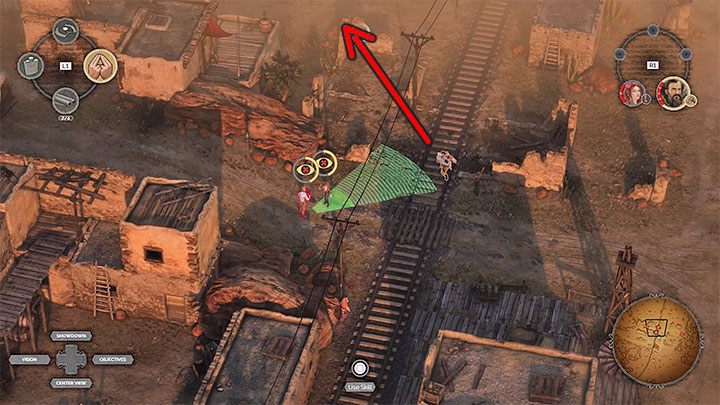 Getting close to the wagon from the south is much more problematic. Return to the area where the tracks are to be blocked (M14,6). Use perfume to blind two talking opponents and use Hector to sneak up to the north side of the map. Watch out, however, for a single poncho-wearing opponent who stands on the roof of one of the buildings by the tracks. 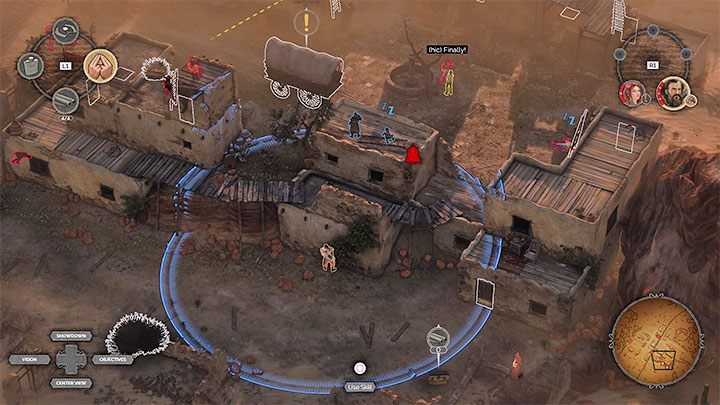 The main idea of the action described above was to allow Hector to reach the northern area adjacent to the village (M14,11). After getting rid of some of the local enemies, you will be able to draw additional bandits out of the wagon area. Set up your snares, hide after whistling and wait for the next opponent to come through the building and get there.

Hector can also start working with Kate and sneak up at some of the enemies in the north in order to carry out combined attacks. 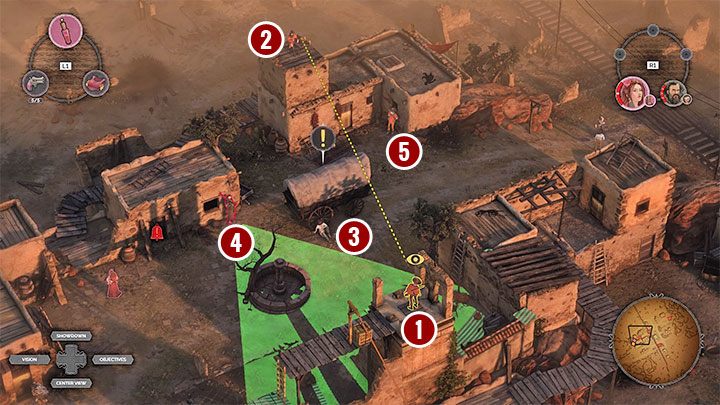 Finally, you will be left to deal with the opponents scattered around the wagon (M14,4) and unfortunately, there is a Long Coat among them. 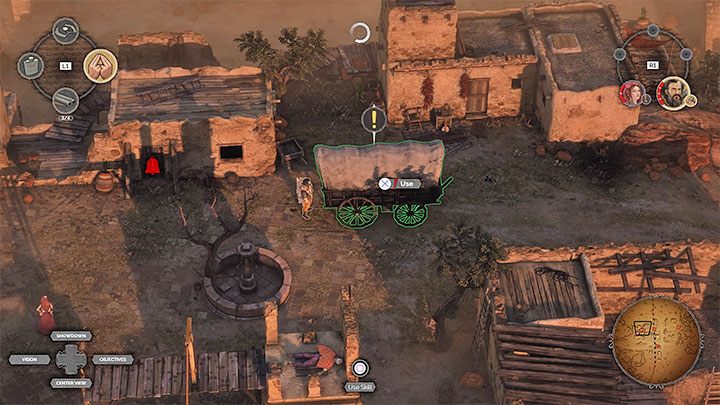 You can now interact with the wagon and start pushing it towards the railway tracks (M14,6). You just have to get the wagon to a point where it starts to roll down the hill. It will crush opponents found along the way. Once the tracks are blocked, you will advance to the next part of the mission - go to the next page of our walkthrough. 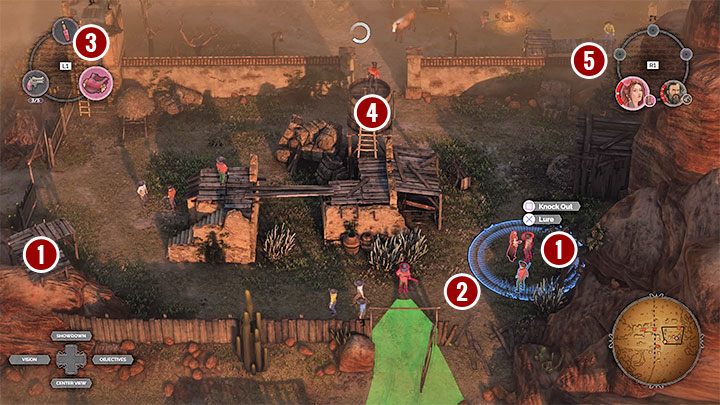 This option involves reaching the farm (M14,5) to scare the cattle, which will run towards the tracks and prevent the train from continuing its journey. As with the wagon, you must be aware that reaching the location with the cattle and setting the roof on fire will not be easy, and getting rid of most enemies will be necessary.

In this case, start by securing all or a large part of the tower area (M14,13) that is adjacent to the farm: 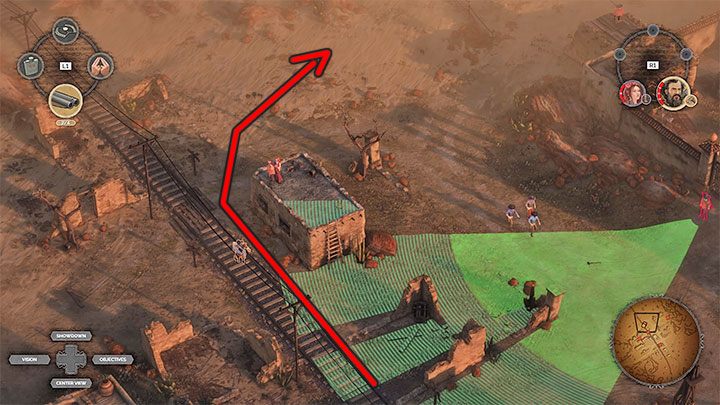 Do not enter the main part of the farm yet. Instead, we're going to start circling it from the left. The main entrance (M14,12) is closed and guarded by 2 poncho-wearing opponents. Moreover, there are as many as two 3-man patrols - you can try to distract the bandits by, for example, whistling or flirting with one of the enemies with Kate. If you managed to do this, use sawed-off shotgun to get rid of the enemies (if needed, you can find ammo for this weapon in ammunition boxes found around the map).

If you don't want to attack patrols then travel north along the tracks, but be watchful of an opponent standing on the roof of one of the buildings by the tracks. You can use Kate to distract him. 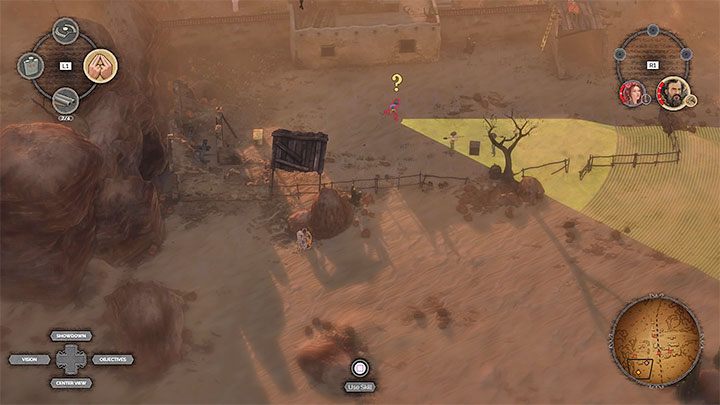 Circling the farm will enable you to reach a desert area next to it (M14,14). Here, Kate can distract a poncho-wearing opponent observing the neighborhood. Hector, on the other hand, can begin to distract his opponents by relying on whistling and footprints deliberately left in the sand.

Make sure you don't draw too many enemies away at once. Fortunately, you can use the sawed-off if necessary, as this is an isolated area where no one will hear the sound of a gunshot. You'll also find a box of ammunition for the weapon. 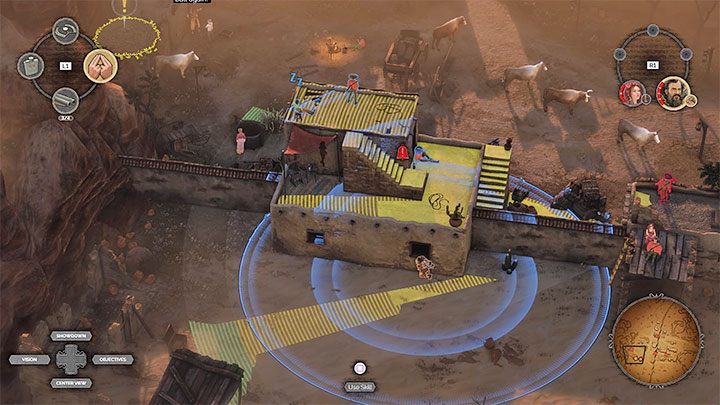 The main reason for crossing the desert area is to access an alternative entrance to the farm (M14,5). You can: 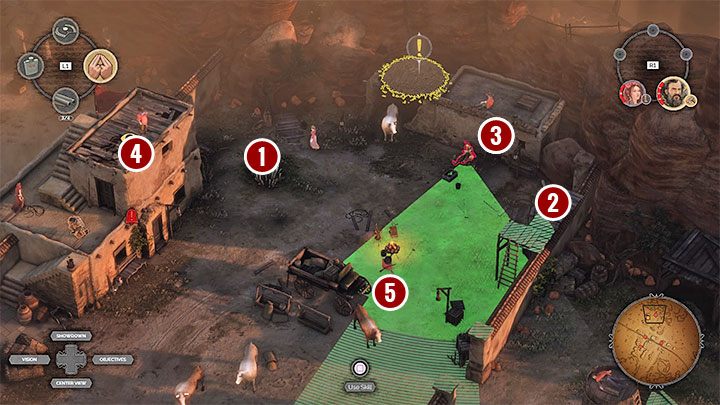 Finally, you will be left with an area in the immediate vicinity of the cattle. Unfortunately, getting rid of enemies in this area will be harder: 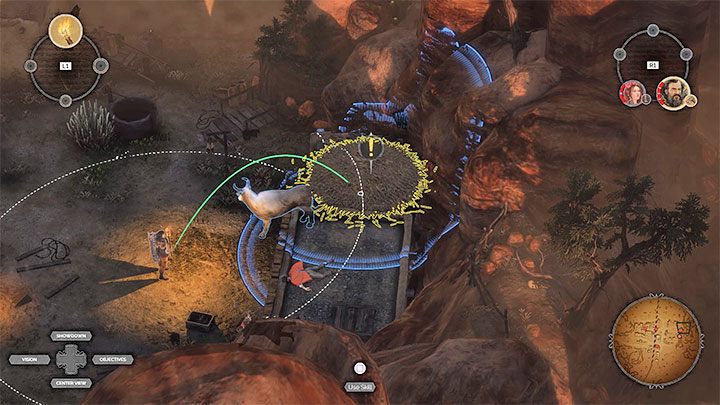 Getting rid of enemies from the central part of the farm (M14,5) was needed in order to be able to interact with the campfire and get the torch. Your task is to throw a torch at the straw roof - an example of the trajectory is shown in the accompanying image. Setting the roof on fire will automatically begin a cut-scene showing the stampede. Interestingly, charging animals will automatically kill enemies at the entrance to the farm.