On this page of the World Atlas for Desperados 3 we have posted a detailed map for Mission 14 - The Wages of Pain. The map is characteristic for its important quest locations - these are, among others, a blockable rail crossing, an interactive wagon, and a pen with cattle. In addition, the page lists all challenges that involve placing opponents on railroad tracks and carrying Isabelle without dropping her.

A full walkthrough for Mission 14 can be found on the following pages of this chapter. Our walkthrough also contains links and indications that refer to the map. For example, the designation (M14,5) indicates that you should find the blue point numbered 5 on the map for mission 14.

Mission 14: Markings on the map

Mission 14 (The Wages of Pain) takes place in a relatively small location, but the number of opponents and the mission's objectives can make it difficult to complete. It is a town on an uninhabited area with a railway station. A train passes through the map every few seconds and this will continue throughout the initial part of the task. The railway car arriving is paradoxically a useful feature, as it will allow you to quietly eliminate some of the sentries who, in the gaps between train journeys, are in sight of other enemies. Of course, you have to be careful about the train itself, because it can kill your heroes.

Your heroes are tasked with stopping the train in order to board it. The action plan for this mission is to block the railroad tracks and the game will offer two ways of doing that - you can push a large wagon onto the tracks or scare off cattle that will run toward the tracks. Unfortunately, there are many enemies near the wagon and the cattle, making it difficult to complete the mission.

The second part of the stage will begin once the train stops. From this point on, Hector and Kate will be joined by Cooper, who can help with eliminating enemies. Bad news: in the second part of the mission, Cooper (or another hero) has to carry an unconscious Isabelle, while additional enemies will get off the stopped train, retaking control of the central part of the map.

Isabelle is not a playable character in this mission. Cooper or any other hero must transport the unconscious Isabelle to the railway car (M14,16) - delivering her there ends the mission.

In Mission 14 there are a total of 8 unlockable Badges. We have listed and explained them below. The challenges are initially hidden, although you can still unlock them during your first playthrough.

Use the wagon to block the train tracks 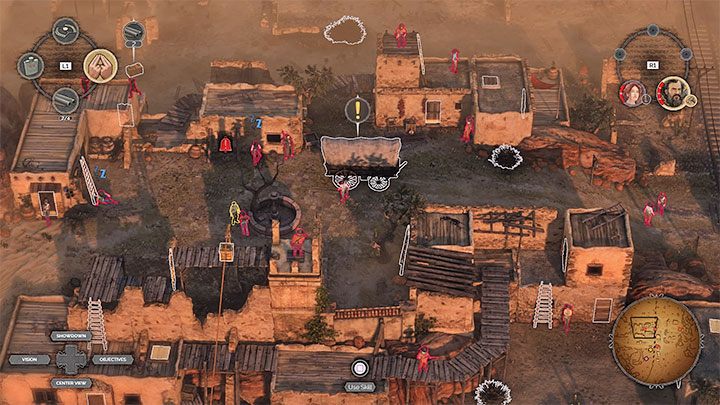 This and the third challenge are theoretically mutually exclusive, as only one way of blocking the railway tracks can be used. Fortunately, after winning one of these 2 badges, you can load the previous save and perform the opposite action. This will allow you to win both challenges in a single playthrough.

The wagon is located in the town (M14,4) and getting there is not easy. You have to get rid of all or at least most of your opponents, including a Long Coat. For complete information visit our walkthrough.

Kill 5 guards with the train 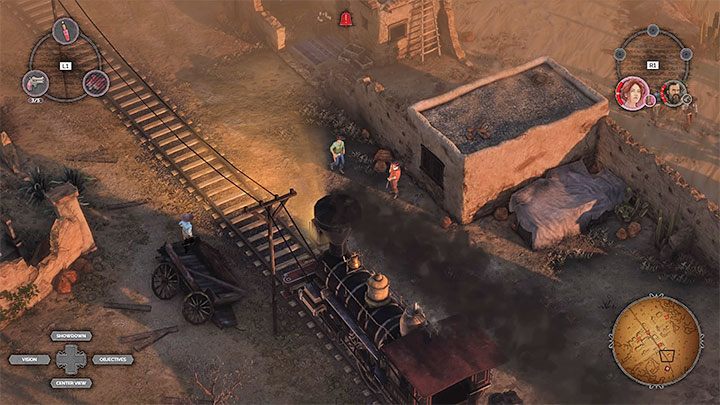 The challenge is quite simple. A train passes through the middle of the map every few seconds. Stun opponents in the area, tie them up and place them on the tracks. An opponent lying on the tracks will not stop the train, but will be run over and killed.

Don't wait to do this challenge, as once you've advanced enough in the mission, the train will stop passing through the town. You would then have to load an older save or restart the mission.

Use the cattle to block the train tracks 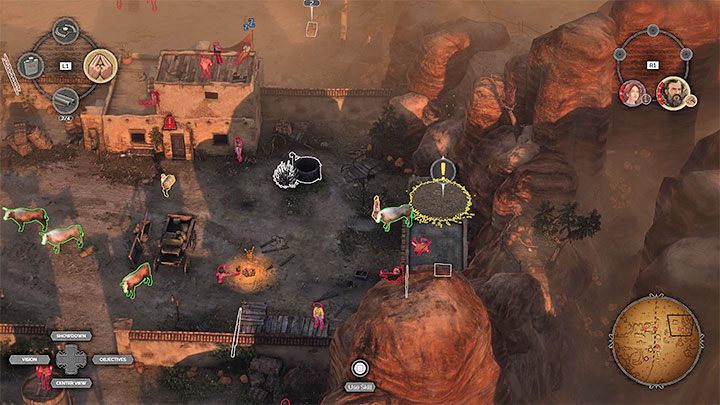 The cattle is found on the farm (M14,5) - to scare the animals, you need to set a straw roof on fire. This is not as easy as it seems. You have to get rid of all or at least most of your opponents, including a Long Coat. For complete information visit our walkthrough.

Don't kill anyone (except mission targets) 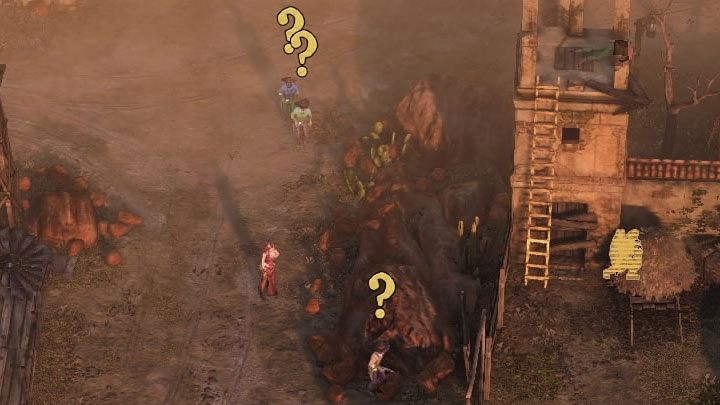 This is a difficult challenge that is best completed when repeating the mission at the easy difficulty level. The requirements of this challenge make it more difficult for you to deal with groups of opponents, including several 3-man patrols. During a normal playthrough, such groups can be easily killed with sawed-off shotgun.

If you're having trouble with such groups, experiment with Kate's flirting and Hector's whistling. This can lead to a situation where the enemies in the group temporarily disperse (an example of this is in the picture) and it opens up a chance to stun one of them.

Finish the mission without dropping Isabelle 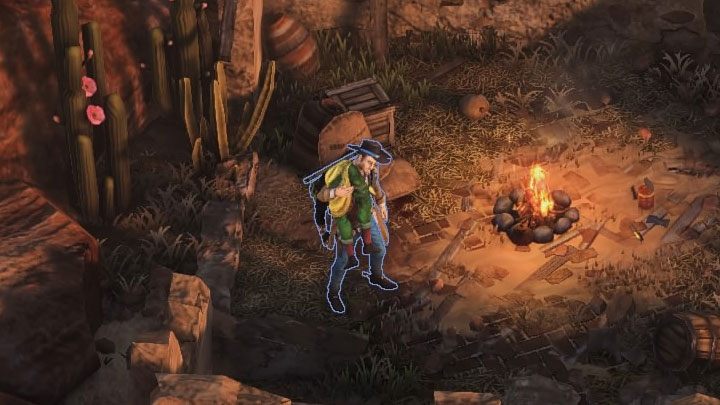 This Badge can be easily unlocked during the first attempt to complete this mission. Cooper starts carrying Isabelle after you block the tracks and advance to the second part of the mission (M14,15).

You can't put Isabelle on the ground i.e. you cannot use Cooper's skills. You just have to continue to rely solely on Hector and Kate to clear the area around the railway car (M14,16) You have to get Isabelle from the campsite and carry her to the marked railway car.

Finish the mission without crossing the train tracks

This one is definitely tougher. Make an attempt to get it when repeating the mission at a east difficulty level. When it comes to this challenge, you cannot cross the railway tracks (M14,2) to get to the right side of the map. You have to stay on the left side of the map at all times. What does that mean?

Generally, remember to eliminate only those enemies that are near the wagon and the neighborhood of the railway car which is your destination.

Even with the time limit, it's recommended to get a disguise for Kate, as it will make it easier for you to reach the mission's first major destination. We recommend you to choose the wagon (M14,4), as getting to it is less problematic than getting to the cattle. In the second part of the mission, try a riskier approach, which involves getting rid of the opponents which are nearby the railway car (M14,16), and bringing the whole team there before the alarm is raised.

This is the best choice when completing the mission for the first time, but playing on a high level of difficulty means having to deal with uncomfortably positioned opponents. This becomes especially troublesome in locations with the wagon and cattle - drawing away individual enemies is much more difficult, and you have to deal with 3-man enemy patrols (sawed-off shotgun is great against them) Make sure to get a disguise for Kate, as you can use it to distract many enemies standing in locations that are inaccessible to Hector. Fortunately, this challenge doesn't have a time limit, and you can save your progress freely.