On this page of our Desperados 3 guide, you will find the third and last part of the walkthrough for Mission 13 - A Cart Full of Gunpowder. There are two important things to do in the final part of the stage - our solution tells you how to get to the cages with Kate and Cooper and how to open them, and where to get to the wagon and how to detonate it safely.

Freeing Kate and Cooper from their cages 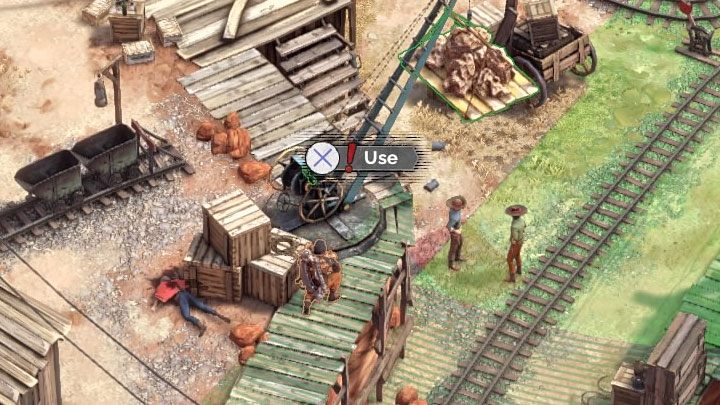 Deal with freeing the remaining 2 heroes once you reach the rear area of the mine (M13,14). The cages are located in the upper left corner (M13,15). Take your time on your way to them. Draw or sneak up on successive individual opponents. In the location from the screenshot, you can also drop a heavy cargo on the two guards standing underneath it, and this will of course be treated as an accident.

You'll find ammunition boxes on the roof of the left building. You can also get in there by whistling a regular Sentry. After getting rid of him, it is very easy to kill the Long Coat and an opponent in a poncho standing at a table. 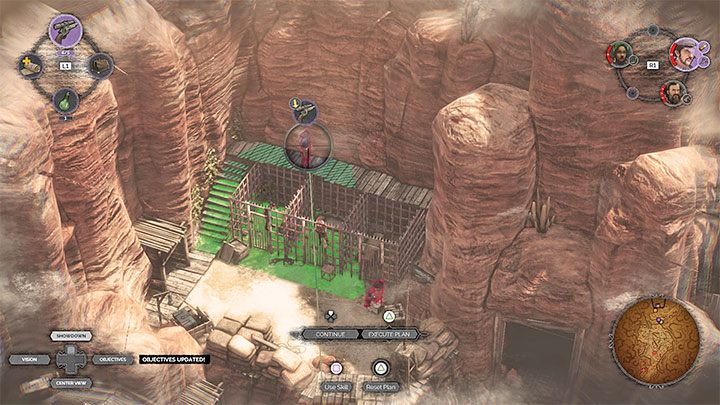 Bring McCoy to the roof of the building and wait for a good time to take out the guard over the cages. After killing him, only the opponent in the poncho will remain. Both cages must be opened by McCoy.

Securing the rear area of the mine 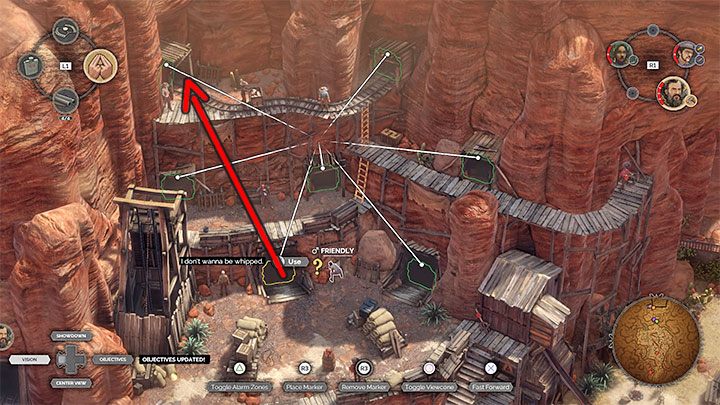 Don't be in a hurry to get to this place with your cart, because you need to get rid of the enemies in the area first, specifically those who stand by the tracks or look towards them.

A larger group of opponents waits in the area with cave entrances (M13,16). Distract your opponent in a poncho and enter the lower cave. You can travel between all levels and eliminate enemies best start from the top level. However, watch out for a single sentry who travels around the area. It's best to attack him quickly when he comes out of the cave at the highest level. If you've reached the top of the Sanchez mountain, you can also set up your snares right at the exit of the cave. 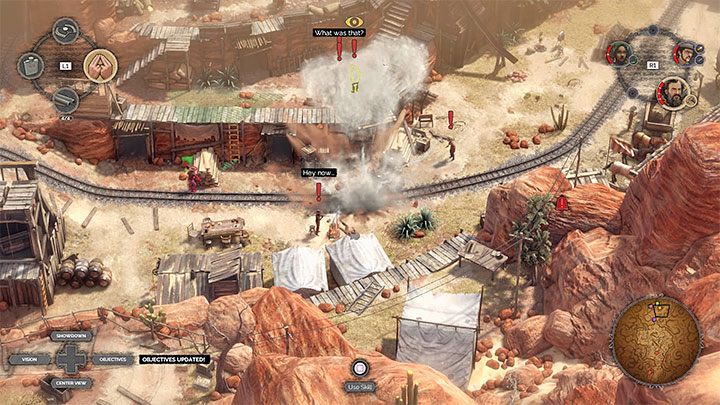 After getting rid of the bandits from the upper level, take care of the opponents from the middle level and leave the lower level at the end.

You'll find a crate of dynamite here. The game allows you to throw dynamite at opponents, although a dynamite explosion results in triggering an alarm. As a result, it is best to ignore this crate and get the Associated challenge after completing the mission. 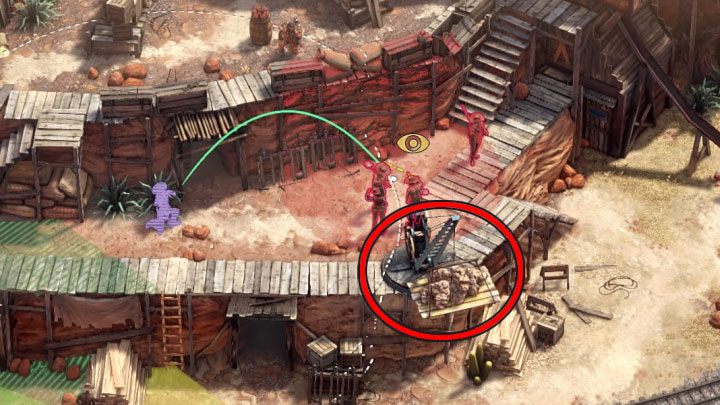 First try to get rid of all the usual opponents and enemies in the poncho from this area. Unfortunately, there are three long Coat opponents in this part of the mine. One of them travels with a double guard, but he can be easily killed. Get to the the hanging cargo from the screenshot. It is guarded by a group of opponents who would be better treated with swamp gas or drawn away and then eliminated in a combined attack in Showdown Mode.

After gaining access to the crane mechanism, the Long Coat is placed directly under the hanging cargo and dropped on top of it. 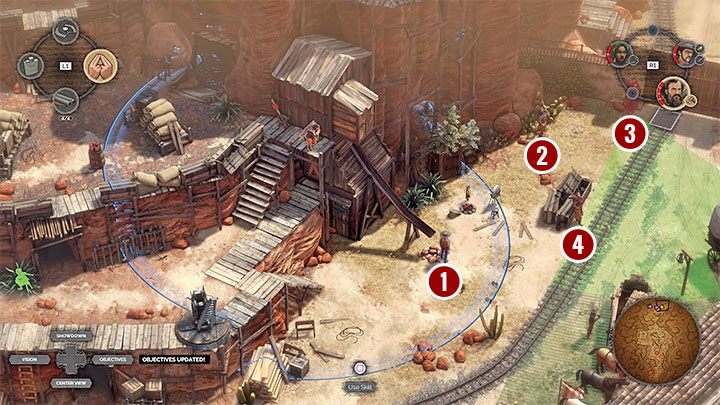 The other two Long Coats are stationed at the gate (M3,17), which you will have to blow up later.

Before you head back to the location with your coach, make sure your itinerary is fully secured. 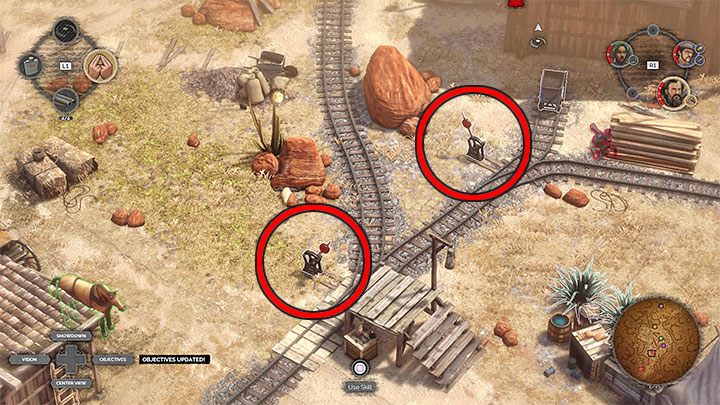 Go back to where you found a gunpowder-filled cart (M13,4) in the early part of the mission. You can start pushing him once you interact with him.

Along the way, you'll find crossovers that allow you to direct the wagon onto new tracks. You'll have to use a few of them for the purpose of choosing between pushing the wagon through the left (M13,6) or right (M13,10) part of the mine. 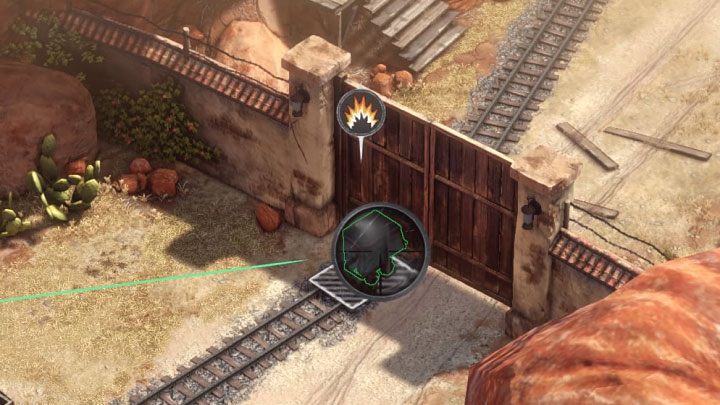 Bring the cart to the closed gate (M13,17). Fire toward him from a safe distance using McCoy's sniper rifle to detonate it. This will end the mission.

important note - Don't shoot the cart if you haven't saved Cooper and Kate yet. Otherwise, the mission will not only fail, it will lead to unnecessary alarm.{/ramkaniebieska}