On this page of our Desperados 3 guide, you will find the second part of the walkthrough for Mission 13 - A Cart Full of Gunpowder. This is the most important part of the stage. Our solution explains the rules for pushing a gunpowder wagon. We describe exactly two ways to go through the map - it is possible to choose the left path or the right path. 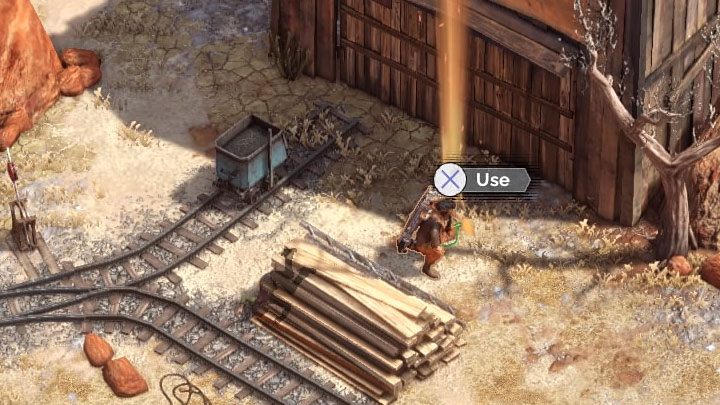 As soon as you leave the starting area you find yourself behind your opponent's back in a poncho, which you can very easily kill. Right next door is a campsite where you will notice the first ammunition crates (be sure to refill the ammunition for the McCoy's gun) and the mine cart filled with gunpowder (M13, 4).

Pushing the wagon is the main theme of this mission - you have to get the wagon all the way to the final gate (M13,17). The good news is that you don't have to rush to push the car. The best way to act here is to leave the task of pushing the wagon to the very end of the mission. The reason behind such action is that it is very risky to push a wagon through locations with opponents. Any enemy attack carries the risk of a missile hitting the wagon and causing it to detonate - this means collapsing the entire task. You can find information about pushing the wagon on the next page of our description of the crossing. 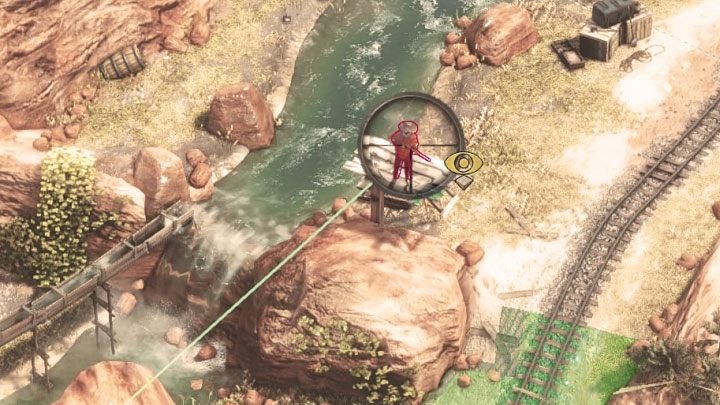 Before you secure the camp with the mining cart, get rid of the sniper (M13,5) who is occupying one of the more remote towers. Before firing a shot towards him, make sure that none of the enemies look towards the tower.

Taking over the encampment shouldn't be too difficult - distract ordinary opponents with a whistle or a medicine bag and rely on the combination to get rid of a pair of enemies. The bandits are so scattered that getting rid of them one at a time won't be a problem.

You have to choose a route to travel through the mine. You can choose the left path (M13,6) or the right path (M13,10). In order to complete this mission, you must choose only one of them. Both variants are described in detail below and each is rewarded with a different badge (challenge).

Crossing the left side of the mine 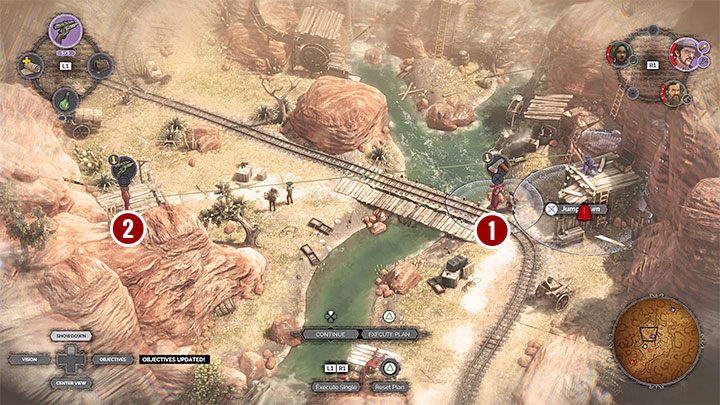 This option assumes the choice of the left path (M13,6), which is the one behind the tower with the sniper you eliminated earlier. The first problematic situation you encounter soon after you start exploring this part of the map is the Long Coat standing by the water (1 in the picture). You can't kill him right away because he's being watched by an opponent in a poncho on the left (2 in the picture). Use Showdown Mode-shoot the enemy in a sniper poncho and at the same time attack the long coat with Sanchez.

It is worth noting that you will find ladders leading to the hill in the same place (M13, 9). You can use them to reach higher shooting locations, to find new ammunition boxes for a gun with a scope, and to reach the right path if needed. You'll also meet 1 opponent who's easy to kill. 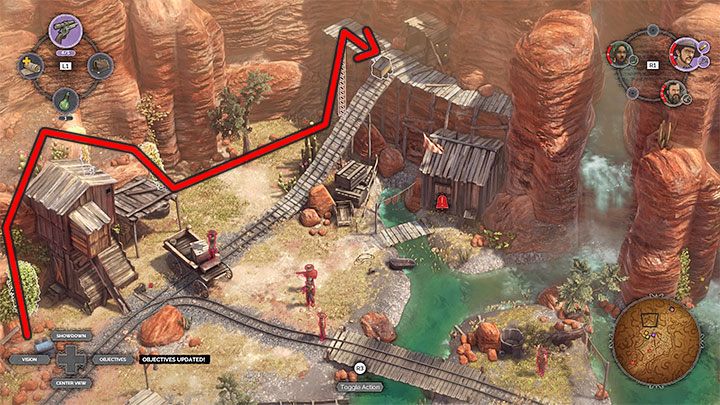 Pick Isabelle and start following the railroad tracks. Walk away from them after seeing the vines, which will allow you to start climbing the side rock shelves. Reach the interactive cart (M13, 7) highlighted in the image. You can push him to cause an accident - wait until there are two opponents patrolling the area in front of the car (red rectangle). A pushed wagon can kill up to 3 enemies. 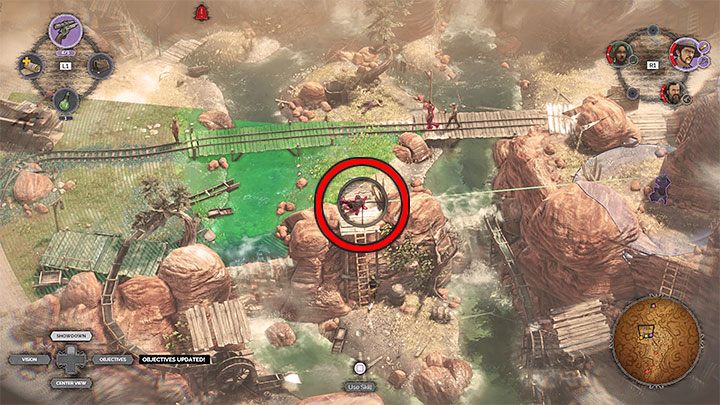 The second Long Coat (M13,8), shown in the picture, who sits on the rocks next to the tracks, can cause you a lot of problems. Getting rid of it is required if you are going to push a wagon through that part of the map. By default, another opponent is facing him, but there is a good chance that he may leave after arranging an accident involving a coach. Get rid of this person before he returns to the vicinity of Long coat. In addition, hold off the attack until another two-man patrol goes left or right.

Sanchez cannot kill the Long Coat, as reaching the ladder behind him forces him to swim across a section of the river. Plan a combined attack involving the use of McCoy's sniper rifle and taking down a weakened long coat playing as Isabelle. Once this problem has been solved, hide the body, get rid of the two-man patrol, and proceed to the next area (M13, 13).

Crossing the right side of the mine 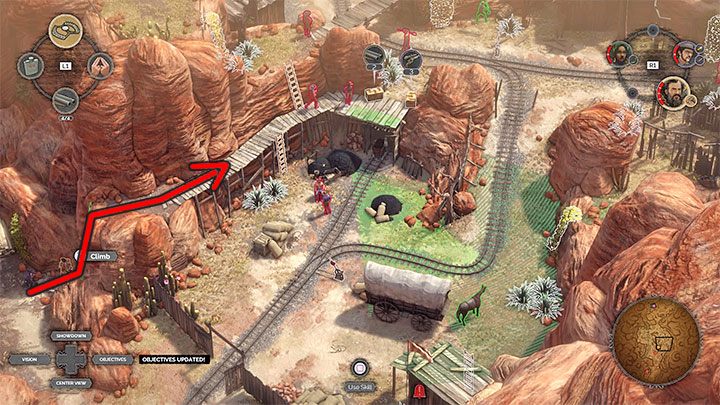 This option involves choosing the path to the right(M13,10), which is the one starting near the barn, with the gunpowder cart parked in front of it. To infiltrate the first area, do not select the main entrance (the one with the tracks). Instead, use a ladder and a path drawn in the picture. You can easily kill 2 enemies from the balconies and 2 standing on the bottom.

There is also a ladder and vines leading to the hill (M13,9). You can use them to reach higher shooting locations, to find new ammunition boxes for a gun with a scope, and to reach the Left-Hand Path if necessary. 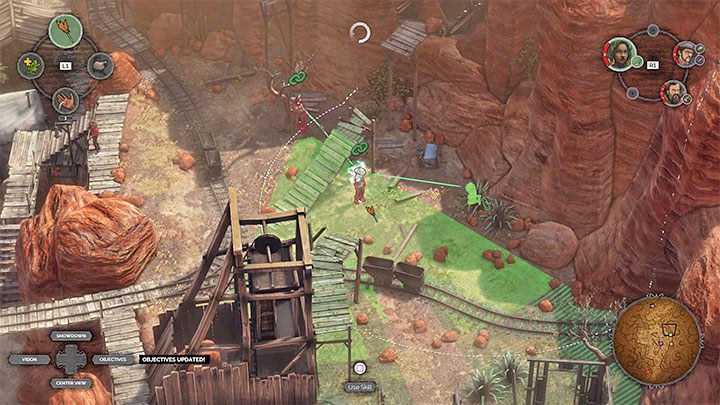 Another area is observed by one of the 2 new Long Coats (M13,11). Start by getting rid of your usual enemies from the lowest level (whistling can be very helpful here). Follow Isabelle to the right and take an interest in the new vines you can climb.

You get to the area from the image where one of the Long Coats appears. Use the connection on two ordinary bandits, quickly dispose of them and hide their bodies in the bushes. Then plan a combined attack-hit the gun with a scope into the opponent's long Coat and quickly kill him. 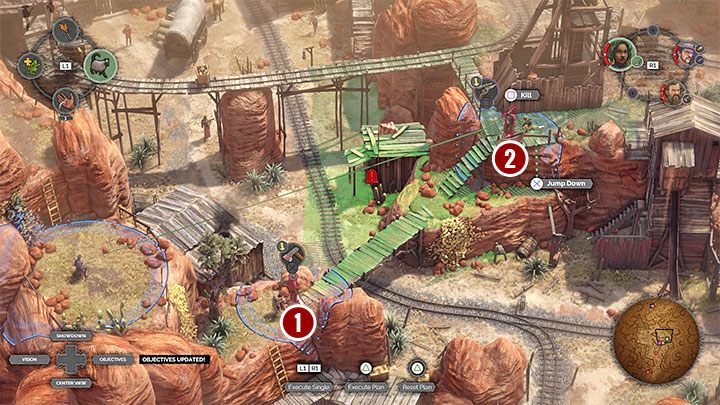 The same should be done for the other long Coat opponent, i.e. the one who watches the track from the higher rock shelf.: 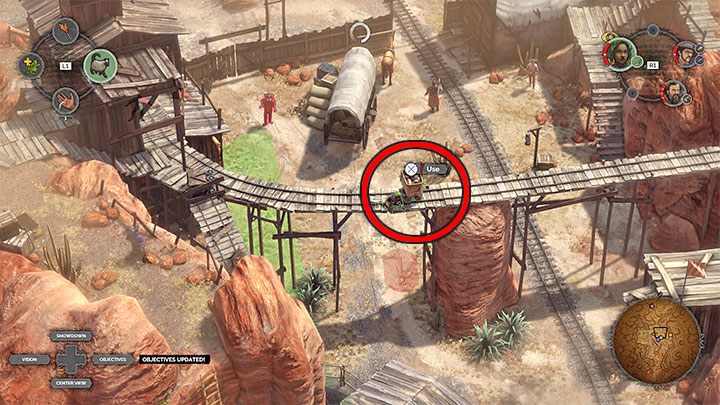 In the next area (M13,12), focus on eliminating two opponents in a poncho on the left. It's perfect for Isabelle and her ability to connect. Then reach the cart marked in the picture. You can arrange an accident here by pushing the cart when the last Long Coat passes under it. A successful operation will kill an elite enemy.

All you have left to do is deal with the other opponents-worth relying on m.in. on the pitch and whistling. Proceed to the next area (M13,13).

Where the railway tracks connect 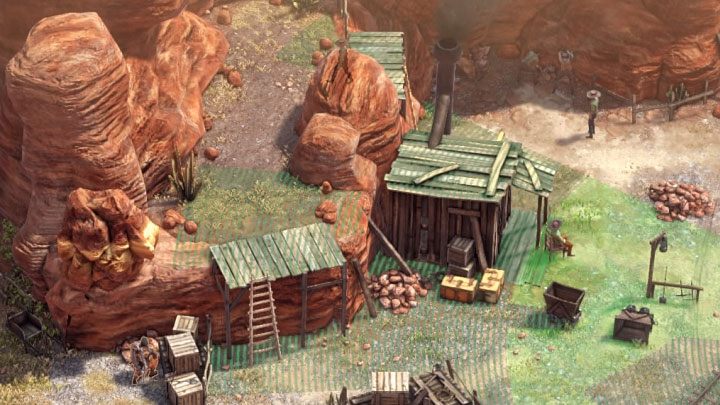 The two paths described above connect in the same location (M13,13) and in order to clear the road for the cart, it will be necessary to eliminate all or almost all of the nearby opponents.

Some enemies can be easily pulled away from the rest of the group. For more problematic enemies, take an interest in the higher image shown on the left. Here, you can push a large boulder onto opponents walking along the main path, and you can set traps behind rocks and draw opponents there with whistling. 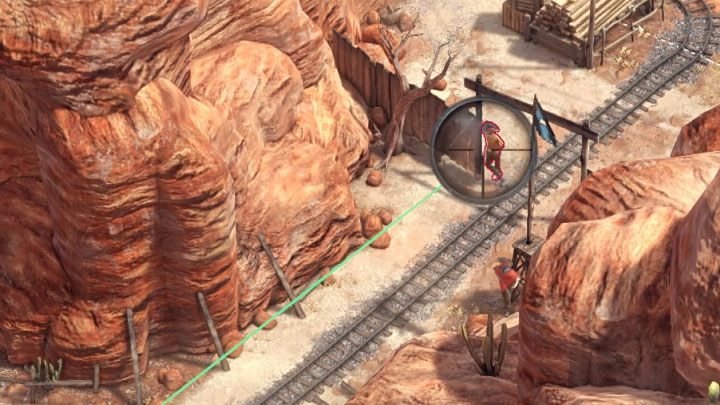 Leave the two opponents guarding the passage to the last section of the map for the end. It is a very narrow passage, so you don't have much room to maneuver. An opponent who is standing against a fence is best shot with a sniper rifle, and his team-mate runs up to Sanchez as he looks the other way.

Getting rid of these enemies will allow you to move the entire team to the rear area of the mine (M13,14).