On this page of our game guide to Desperados 3 you will find the second part of our walkthrough of Mission 12 - Dirt and Blood. Our walkthrough takes into account all major options that can be used to reach Pier 9 in New Orleans. You'll learn how to cross the left path and the right path to reach the place where Frank is residing.

Preliminary information - journey to the Pier 9

Left path to the Pier 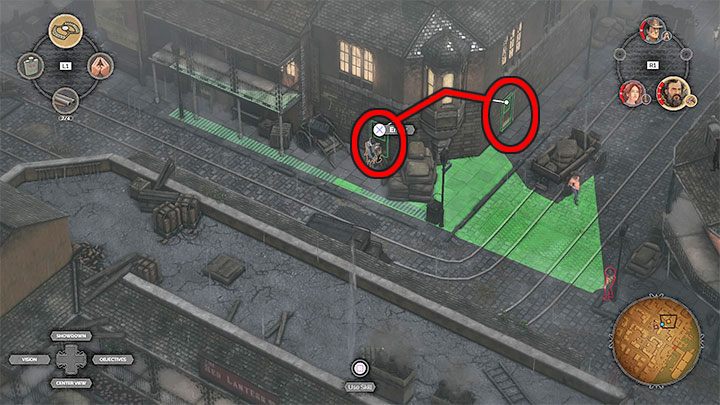 The left path is located at the back of the brothel (M12,9). Soon after you've chosen it, you'll reach a group of opponents set up at a crossroads. Note two things here:

1) You can go through the left building to get a better position behind the car. This is a good place to use whistling and get rid of uncomfortable enemies. 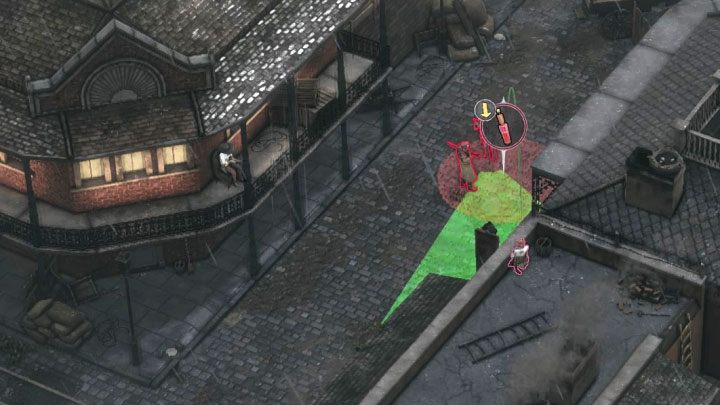 2) You can order Kate to climb on the roof of the brothel (M12,7) and use a perfume to blind a Long Coat talking to one of the bandits. This will make it easier to secure the area by using other character.

As in the previous locations, Long Coat should be eliminated at the end of the battle. 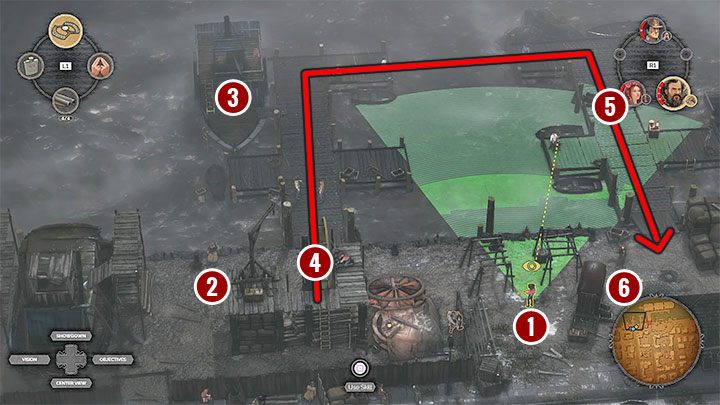 Move on. Eliminate one guard that is sleeping. In front of you there is a larger harbor with a huge steamer wheel (M12,10). This is a difficult location to walk through, as most fields of view of nearby opponents overlap. In addition, there are several Long Coat enemies here. Even Kate has to avoid them, cause they're immune to her disguise. Here are some key tips:

The final phase of the crossing is very simple - start flirting with a single enemy guarding the alley. This way the whole team will be able to sneak behind his back.

Right path to the Pier 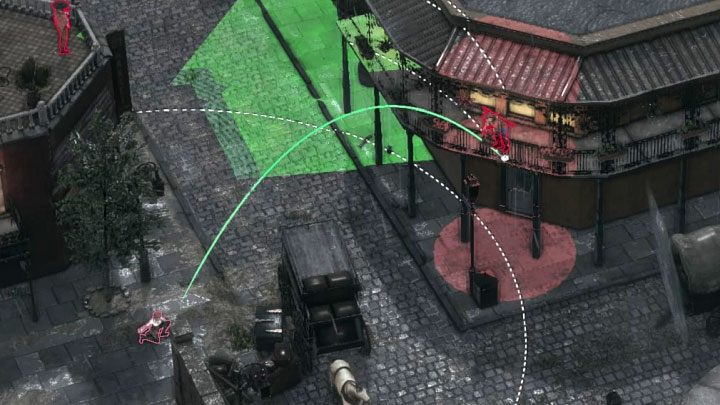 The right path (M12,11) is adjacent to the market place (M12,4) and unfortunately reaching it is more problematic. This is due to the fact that the whole area is observed by a guard from the upper balcony. He has been marked in the screenshot (M12,6).

If you got rid of this opponent while getting Kate's disguise, then you can move on immediately. Otherwise, get close enough to throw a perfume vial at him. This will allow another hero to enter the building and deal with that character in melee combat (of course, only do that when it is safe). 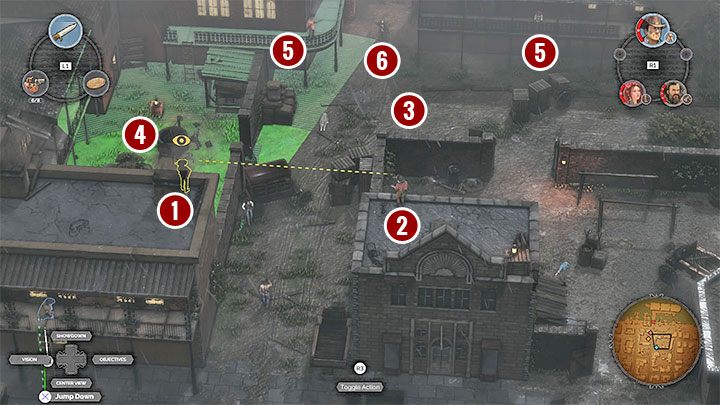 The right path is patrolled by 2 opponents. However, defeating them is not difficult - you can set up a trap or hit them from behind while controlling Cooper. Then, you can throw a knife at them. After that quickly kill the other bandit. Right next door there is a side street (M12,12) and crossing this area will be much more difficult. Here are the key tips: 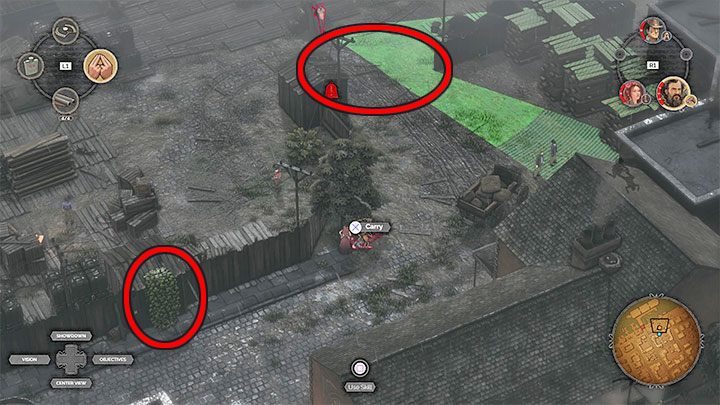 After all heroes have crossed the side street, you will reach Pier 9 (M12,13), which you may have already visited in mission 10. There are two main ways to access the pier / docks area:

Sanchez is not completely useless here - with the option of setting up traps and whistling, you'll be able to get rid of a first few enemies. Unfortunately, the bandits on the other side of the fence will not respond to your distraction attempts. Therefore, you can't draw them away and make them leave their posts. 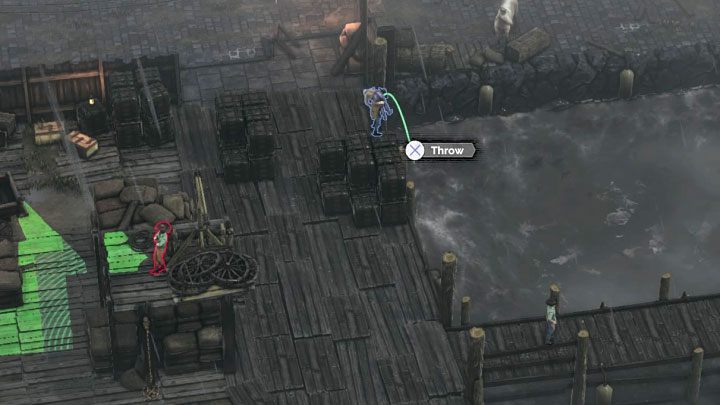 It is worth taking advantage of the fact that Cooper, due to the ability which allows him to climb vines, can reach the outskirts of Pier 9 and get to its rear part. It will allow him to eliminate a few enemies from the area. What's more, you can immediately throw their bodies into the water. You won't get spotted later. 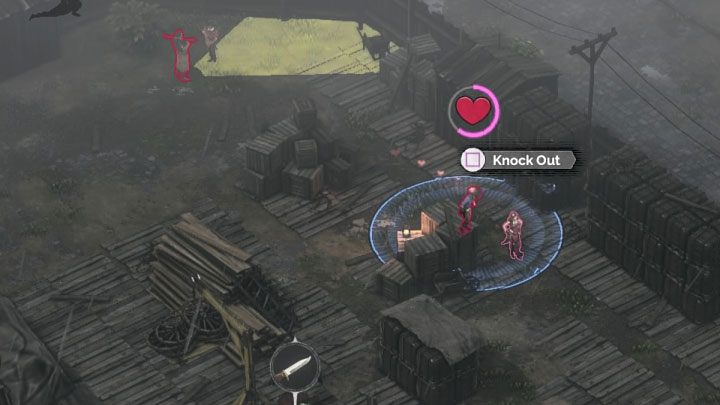 Kate should continue to distract enemies but remember to observe the path of Long Coat enemy all the time. Run away and hide Kate if Long Coat opponent will set off towards her. In case of more problematic enemies, use perfumes instead of flirting. Ultimately, try to allow Sanchez to reach the second end of this location.

The gate in the area of Pier 9 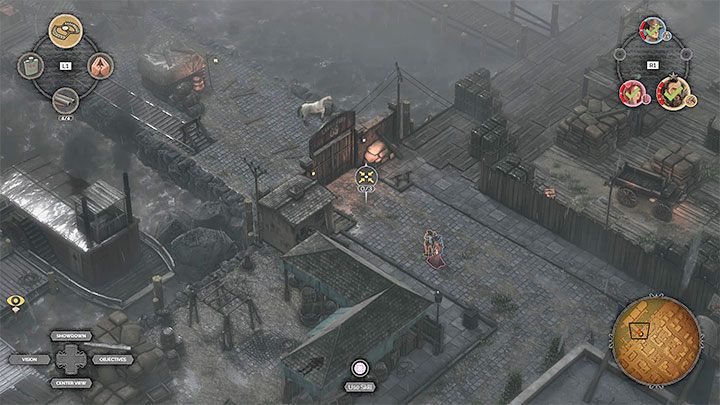 The two paths described above lead to the same place - to a gate located in the docks (M12,14). After you try to interact with it, a cutscene will be displayed. Cooper is the only character that may enter the final area of the map. You won't be able to control Kate or Sanchez from now on.