On this page of our game guide to Desperados 3 you can find the first part of our walkthrough of Mission 12 - Dirt and Blood. From our solution, you will learn how to sneak through the cafe to get past an enemy outpost, as well as where you can get a new disguise for Kate and what steps are required to get it. 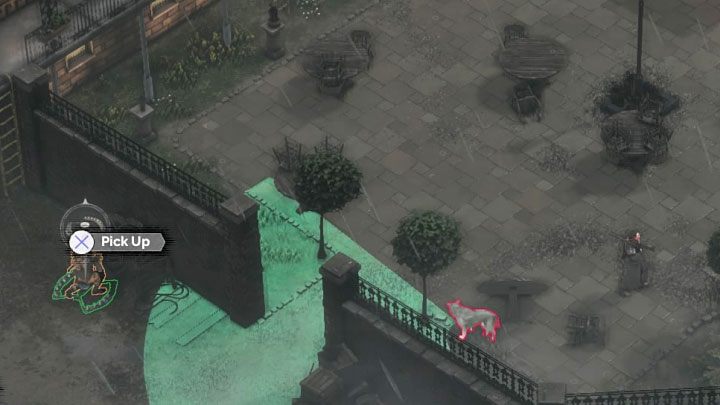 All heroes begin their mission at the same location (M12,1). You will immediately notice one of the major difficulties of the mission - there is a barricade on the main road (M12,2), which cannot be climbed in any way. The only solution is to bypass it. Do the same in case of blockades from other areas of the map.

To bypass the first barricade you will have to walk through the cafe (M12,3). It's not that easy because you will come across first opponents here. Sanchez's skills are a perfect solution for getting rid of a few ordinary enemies and a guarding dog. Just remember to quickly run away from the trap when you use the whistle ability to lure a dog. 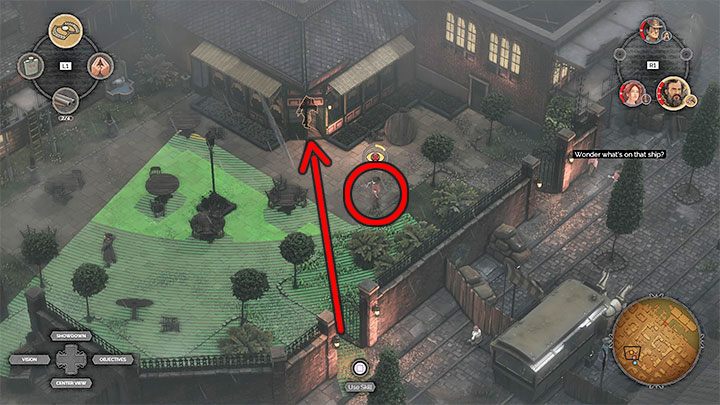 While eliminating enemies around the cafe, you have to watch out for the elite Long Coat opponent and the bandits standing on the roof, who have a wide field of view.

It is best to reach the roof by blinding an opponent in a poncho and ordering Sanchez to reach the middle door marked in the attached screenshot. There should be as many as 3 opponents on the roof. It's best to eliminate them one at a time and hide each corpse in a hatch. 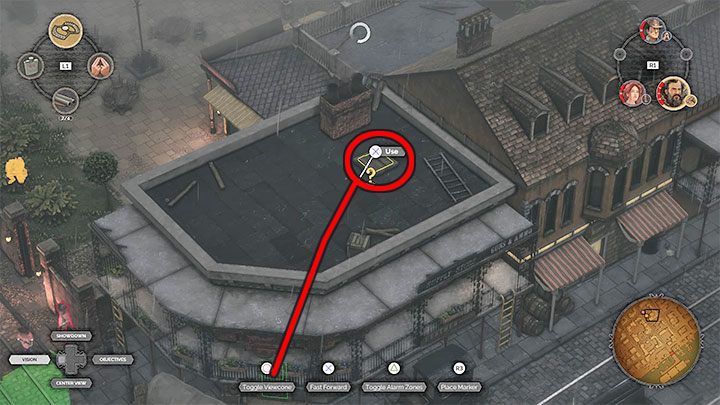 You can get the whole team to the next part of town in two main ways. A simpler option involves the use of a second hatch on the roof (shown in the screenshot above), which allows you to bypass the enemy post.

A less obvious option is to defeat the remaining opponents from the square in front of the cafe and then kill all enemies on the main street behind the station. If you have selected the latter option, then plan your first attack when the enemy in a poncho will set off to meet with the Long Coat.

Acquiring a disguise for Kate

Preliminary note - getting a new disguise for Kate is optional. You don't have to deal with this task to complete this mission. However, the disguise may make things a lot easier during your gameplay. We recommend reading the walkthrough that is available below even if you are not planning to get the disguise. We have prepared a lot of useful tips, that is, how to reach one of the two main paths leading to the docks. 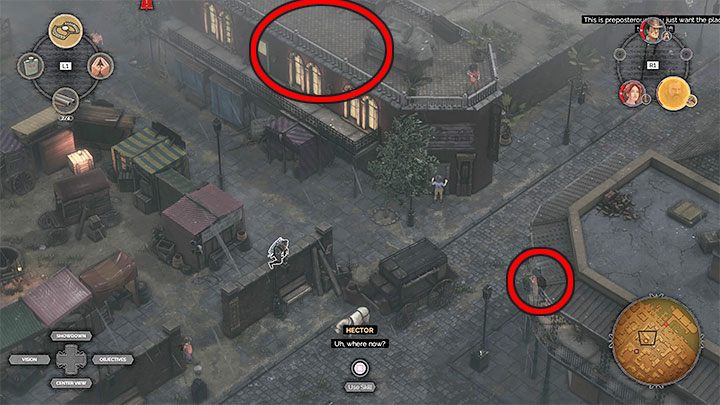 Approach the market square (M12,4), which has also ceased to be a public location. You can start eliminating regular enemies here, and the well-known combination of sniping and whistling is perfect. Hide the dead enemy bodies in hay, bushes or wells.

Watch out for higher-standing enemies from neighboring locations, as they have a wide range of of view and can raise an alarm if they notice the moment of an attack. Pay attention to the places marked in the picture above - these are the roof of the brothel (M12,5) and the balcony of the building on the opposite side of the road (M12,6). Check enemy's range of view in order to make sure that the planned attack can be successful. Fortunately, the opponent on the roof of the brothel remains in motion and you can attack someone after he turns the other way. 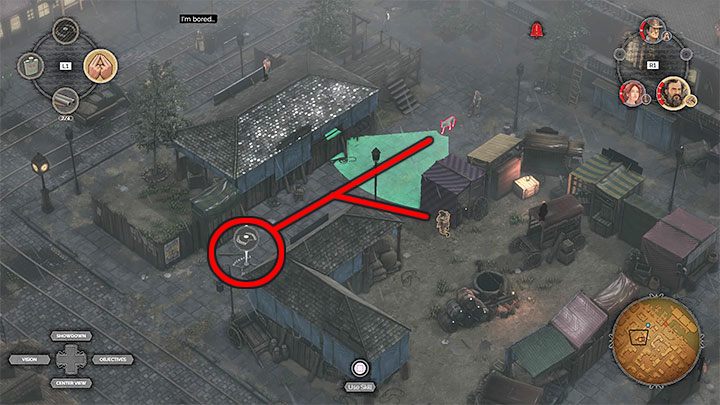 Another serious threat associated with the marketplace is that Long Coat opponent and a guarding dog are patrolling the area. If you attempt to draw the dog away (by using Sanchez's whistling), then such a plan will end in failure.

Start by getting rid of ordinary enemies that wander around the path used by Long Coat enemy. After that find a good place to set a trap and kill Long Coat (while playing as Sanchez) opponent just after the dog falls into the trap. Of course, you can skip this entire step, but you will have to be more careful when travelling around. 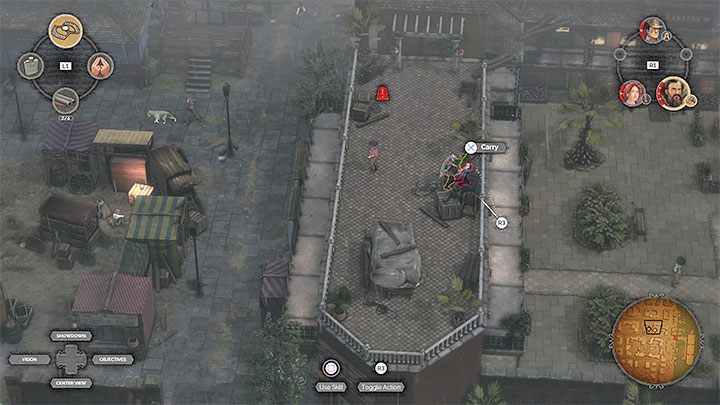 In order to get to the disguise for Kate you should eliminate as many enemies as possible that are located at the roof of the brothel. This refers to the nearest roof (M12,5) and the one at the rear of the building (M12,7). The brothel has another roof, but you won't be able to get there easily for a while.

While you're eliminating enemies from the roof, you must be aware that one of them may be in the field of view of the aforementioned opponent located at the balcony (M12,6). Kill him later or, if you have such an option, sneak up on the enemy from the balcony to throw a perfume vial at him and temporarily blind him. 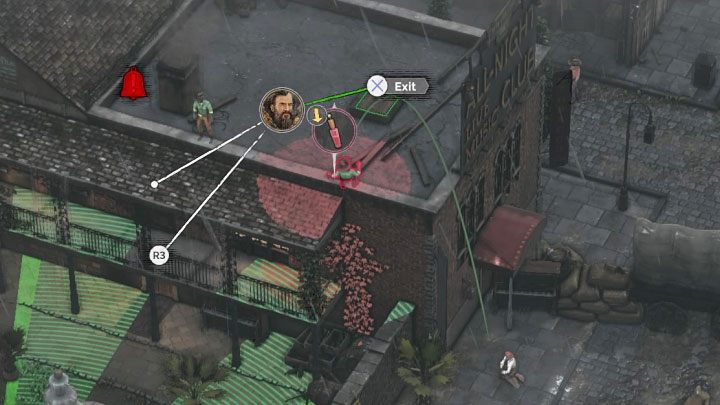 An extremely time-consuming and dull process of eliminating enemies residing in the courtyard of the brothel house awaits you (M12,8). Also, beware of the courtesan. This will be more difficult because in this mission you cannot use McCoy's abilities to easily eliminate enemies from long distances.

Enter the courtyard from the rooftops (M12,7), but you can also use a ladder near the main entrance. Beware of the Long Coat enemy that patrols the area between the courtyard and the street. Try to distract common enemies by whistling and attacking them when no one else is looking towards your way. Opponents from the roof of a remote building can be problematic. You can throw perfume at them (the picture above shows this) and take advantage of a quick climb to the roof with another hero. It will allow you to get rid of both of them. 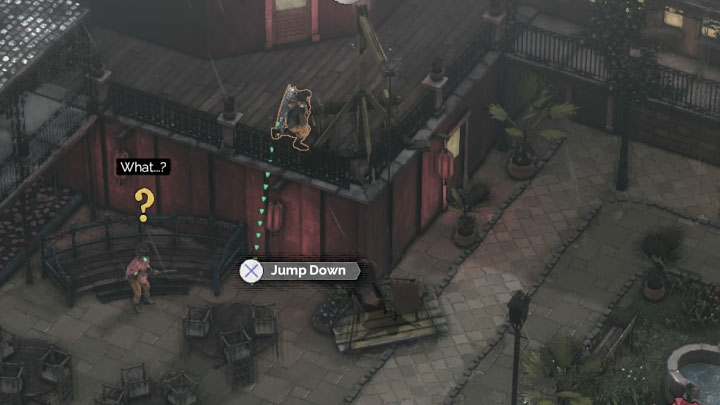 You can draw a few new enemies away by whistling on the roof where you've got rid of the recent opponents. Continue to eliminate opponents who are occupying the area. Once the upper levels have been cleared sufficiently, take an interest in the hanging load. It can 'land' on 2 opponents.