On this page of the Desperados 3 game guide, you will find the third part of the mission 10 - Back Alley Jazz walkthrough guide. The final part of the stage involves a walk towards the Storage area, where there is an office to search. Our solutiona tells us how to cross side streets safely and how to infiltrate the last area without being noticed.

Crossing into the storage area 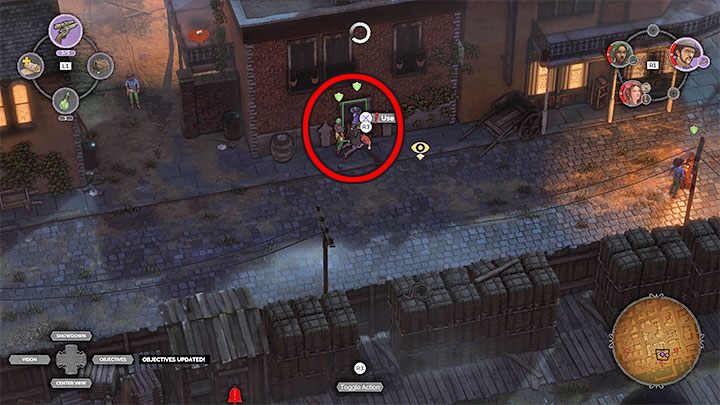 The transition to the back alleys and a new part of the map is located near Pier 9 associated with the previous main objective of the mission (M10,8). Kate can enter the area in disguise, as well as distract nearby opponents. This may make it easier for the other team members to infiltrate the new terrain.

In McCoy's case, the ideal variant of the behavior is to use the door marked in the image. They will allow the doctor to reach the roof. McCoy is able to find a crate of sniper ammunition there and start using the weapon on lower-ranking opponents. 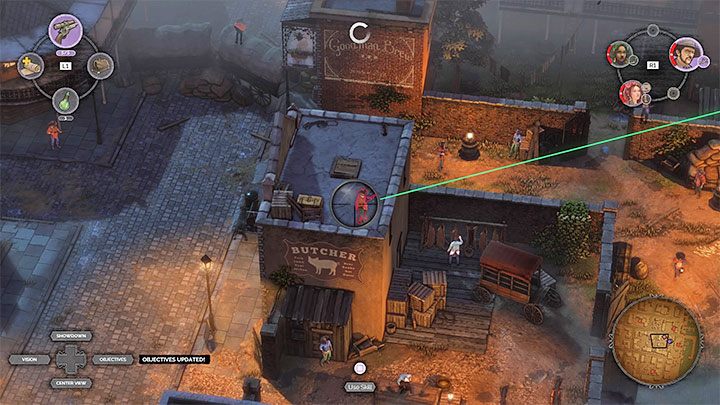 In the first alley (M10,9), the appearance of a guard dog will pose a large threat. For the record, dogs are able to "unmask" Kate even when using a disguise. They do not have a large "olfactory range," but still attach a preview often so as not to get too close to the animal.

Two different paths lead to the next area and it is best to try to secure the one that does not lead without a yard. Pay special attention to the sniper in the picture above, whom you can shoot as McCoy. There is also an opponent in a poncho on the lower balcony - shoot him or at least distract him. You can eliminate more enemies one at a time. It shouldn't be too hard. 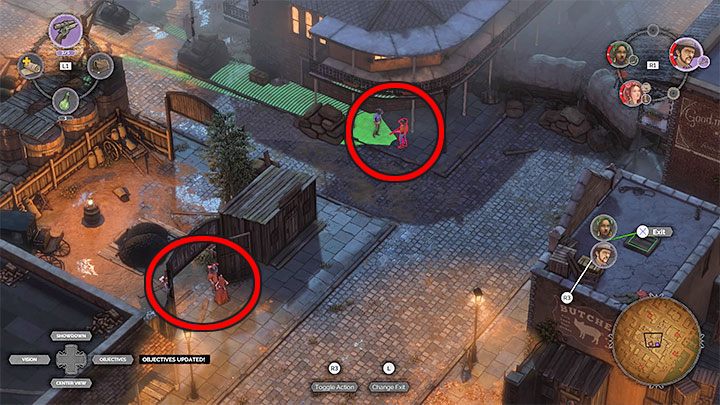 After approaching the second alley (M10,10), you must first eliminate or temporarily "exclude" opponents looking towards the place you came from - they are marked in the image above.

When disorienting or eliminating the aforementioned bandits, watch out for the Long Coat, who patrols the second aisle. Stay away from him for a while. 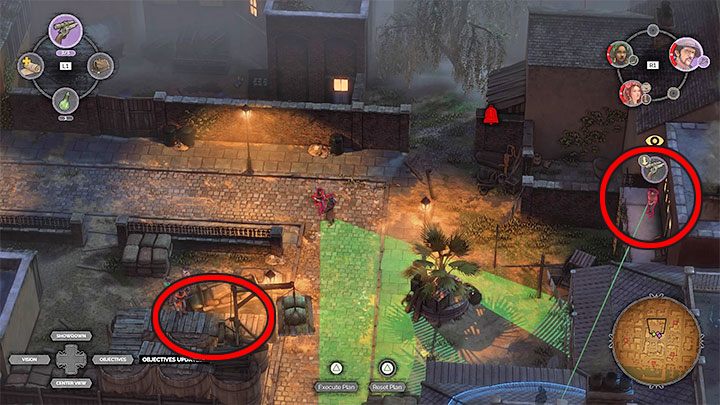 Again, it is worth trying to get to the roof of one of the local buildings. McCoy can open the locked door of one of the buildings (do so when the Long Coat doesn't go that way). There are 2 opponents on the roof, so bring Isabelle here too to get rid of them in a combined attack.

There's sniper ammunition on the roof, which you can use right away. A gun with a scope is best used to get rid of opponents spaced in places from the accompanying image. In both cases, before firing shots, make sure no one looks toward these characters. A good time to attack might be, for example, a conversation between long coat and the Bandit. 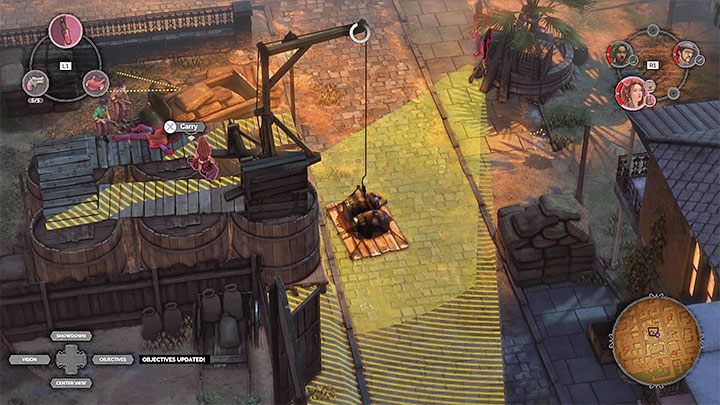 The opponent of the Long Coat from the second aisle will be interested only after the threats described above have been eliminated. Notice that there's a heavy load hanging over the main street. Reach the place where the crane mechanism is located.

Wait for Long Coat to head towards the hanging cargo and use the perfume to blind the character he had previously spoken to. Drop the charge to crush Long coat. You can also get rid of the remaining enemies from the second aisle or just skip some of them and move on with the whole team. 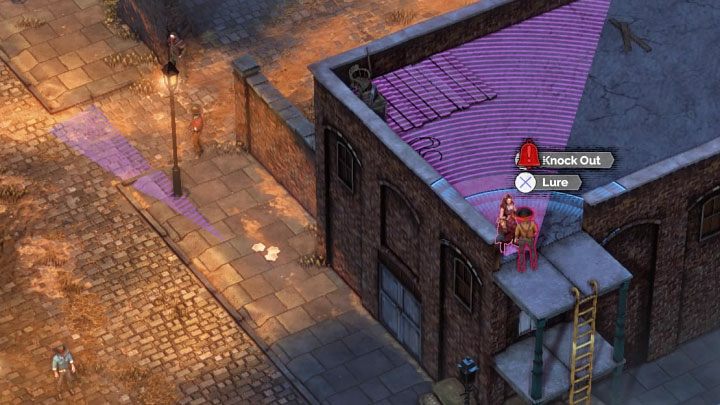 The heroes soon arrive near the warehouse area, but unfortunately, the main entrance (M10,11) is well-guarded and there is a Long Coat among the opponents. Fortunately, you don't have to deal with this problem, because right next door there is a ladder to reach the roof of the building (M10, 12).

Send Kate first to stun or distract the sentry on the roof. This allows the other two heroes to get to the roof.

Opening of the shed and examination of the office 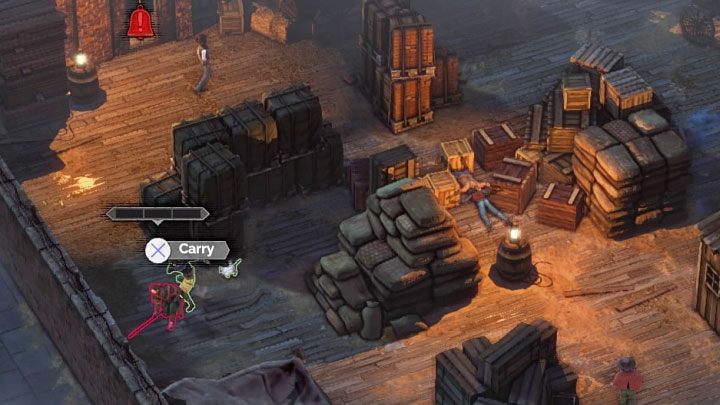 By walking through the roof, your heroes will be in the vicinity of the Storage Yard (M10, 13). Once again, you'll find the ammo box for McCoy's weapon. Use the scoped pistol also to get rid of a single sniper set up on one of the higher ledges.

There is a Long Coat walking around the warehouse area. Don't let him detect you. There are also some ways to make the job easier - you can push the wall of the crates onto two guards and put out the kerosene lamps and deal with opponents who come to re-ignite them. Leave the Long Coat for the end - shoot him with a sniper rifle and quickly kill him as a second hero. 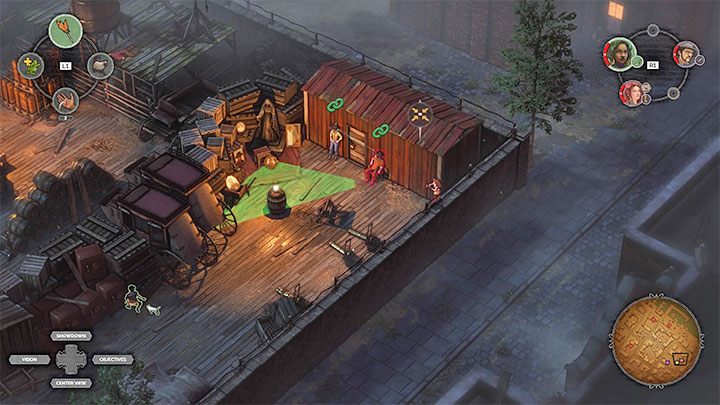 The entrance to the shed with the office (M10,14) is guarded by two opponents. There are different variants of behavior - you can blind them with perfume, use a combination of Isabelle on them, or hit one of them with a sniper rifle.

McCoy must personally reach the office door to open it. Entering the Shed will include a cutscene ending this mission.