On this page of our Desperados 3 guide you can find the second part of the walkthrough for Mission 8 - One Hell of a Night. This is the most important and complex part of the mission. You can take care of it by leading the gang through the centre of the town and optionally, getting a disguise for Kate. The main objective of the mission is to reach the bank and rescue McCoy.

{ramkaniebieska} Our walkthrough for Mission 8 contains references to the map in World Atlas, which can be found on the first page of this chapter. For example,the designation (M8,7) indicates that you should find a blue point numbered 7 on the map for Mission 8.{/frame}

Crossing the central part of the town 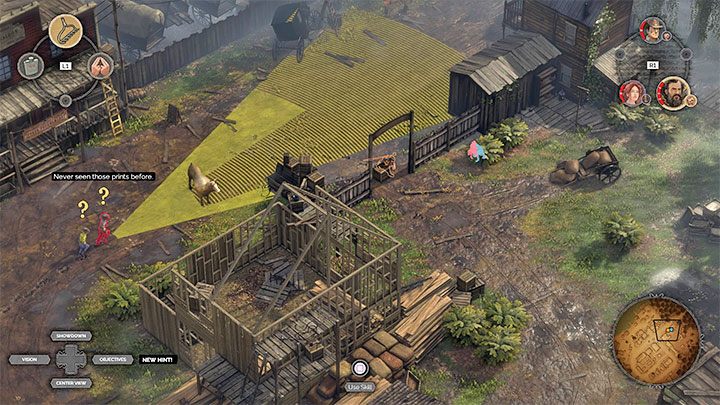 Head towards the pathway leading to one of the city's main streets (M8,4). Start by pulling an opponent found on the opposite side of the road (e.g. through footprints). Only then you can take out the poncho-wearing bandit.

A two-man patrol also travels through the area. Again, the best tactic to draw your enemies to a secluded place is to make footprints. You can combine this with perfume throw to temporarily blind your enemies and make it easier to eliminate them. 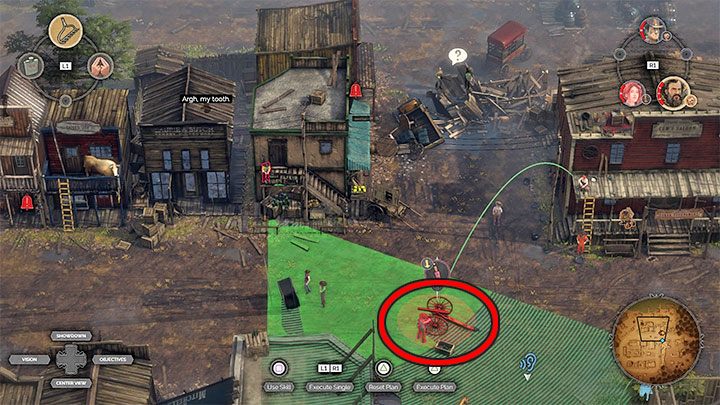 The main junction in the town (M8,5) is quite problematic. There are many adversaries in this place and their fields of vision overlap. You also have to keep in mind an opponent standing further away from the gallows (M8,7) because he looks towards the intersection and has a large field of view.

A good idea to start securing the area is to use the perfume on the opponent shown in the image who is next to the cannon. This will allow you to get rid of two bandits positioned close to the barricade (M8,6). One by one, eliminate enemies, helping yourself with coin tosses and whistling. It is worth noting that in the final phase of securing the crossing you can interact with the cannon and fire it. This will kill the two enemies standing next to each other and will be treated as an accident.

Getting a disguise for Kate 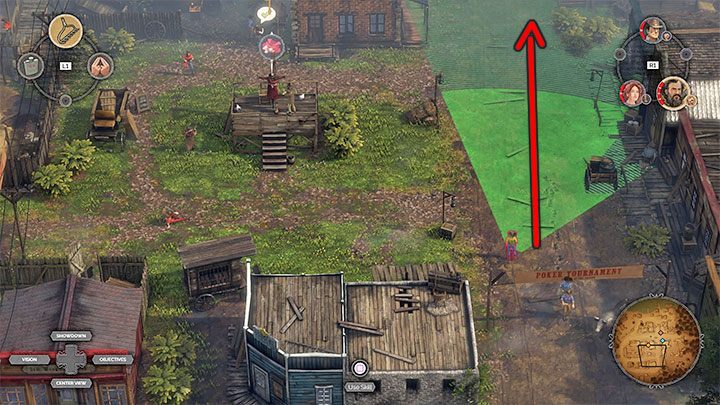 Acquiring a disguise for Kate is optional, but you should not miss this step as it will make it easier to eliminate opponents and sneak the other characters through hostile locations. The disguise can be found in a location with gallows (M8,8). You can get there from the direction of junction (M8,5), but you'll encounter enemies who need to be eliminated. You can distract them with footprints, perfume, or coins and whistling. As you move towards the gallows, look for opportunities to hide in the bushes and behind one of the wagons. 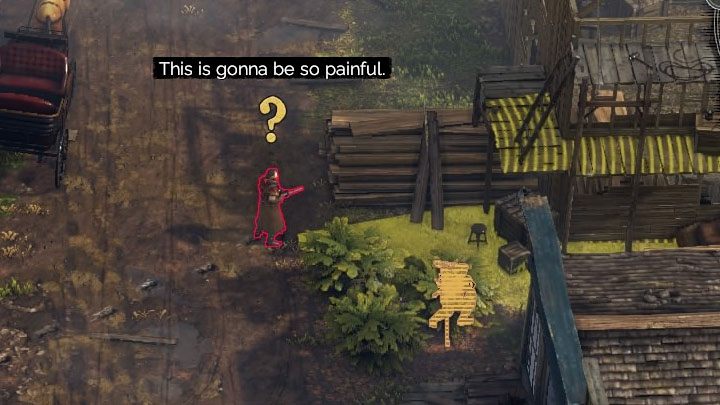 As you approach the gallows, the enemies standing next to it will go their separate ways. You have to be careful because there's a Long Coat among them. A good idea is to use the footprints to lead the Long Coat to the bushes and deal with him using Sanchez.

Don't rush to the gallows even after dealing with the aforementioned long Coat opponent. Continue to draw away and eliminate individual opponents. Also remember not to leave footprints on the mud if you are not ready to deal with opponents who will go to investigate. If necessary, walk on the grass or on the boards. 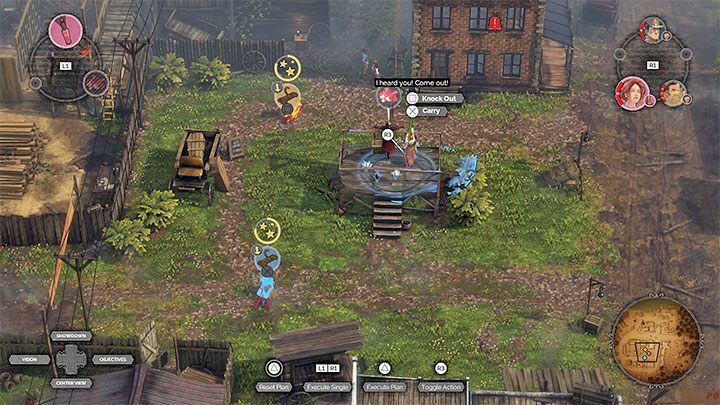 Finally, time to secure the square around the gallows. A recommended tactic is to blind a civilian standing next to the gallows with perfume, and attack the nearby sentries using Showdown Mode. Put on a disguise right away so you can start using it. 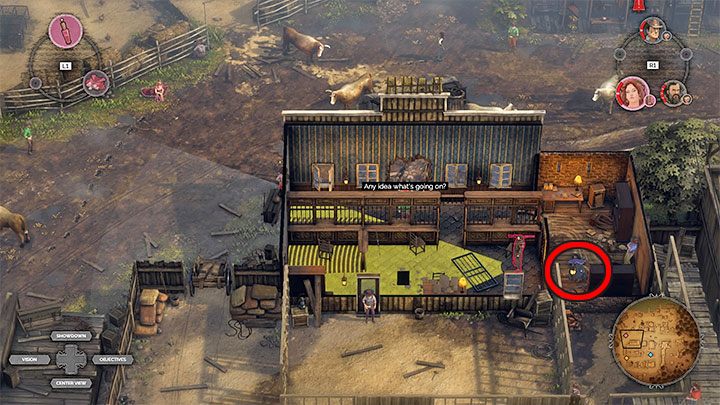 Doc McCoy lies unconscious inside the bank building (M8,13) - we highlighted him in the image above. Unfortunately, there are many enemies in the building itself and in its immediate vicinity, making it very difficult to reach an unconscious team member. 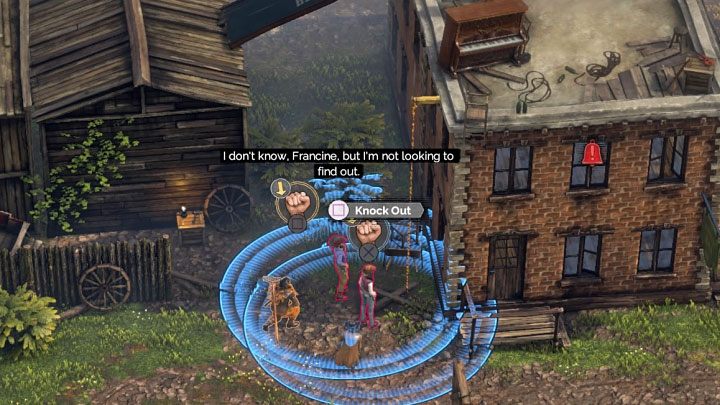 The main entrance to the bank is heavily guarded. Even if you manage to sneak up on it by travelling down the main street of the town, you will encounter m.in. a poncho-wearing bandit who does not react to attempts to get him away from his post. A better idea is to reach the back entrance of the bank and this option involves going through the area at the back of the building (M8,11).

Do not choose the main passageway to the rear area, as this place is observed by a Long Coat. You have two options of sneaking into the area behind the bank. The first option is to walk on the roofs of buildings. Return to the gallows area and take an interest in hanging rope (M8,9). Get rid of the two bandits standing next to the rope using Showdown Mode, then make Cooper interact with the rope. 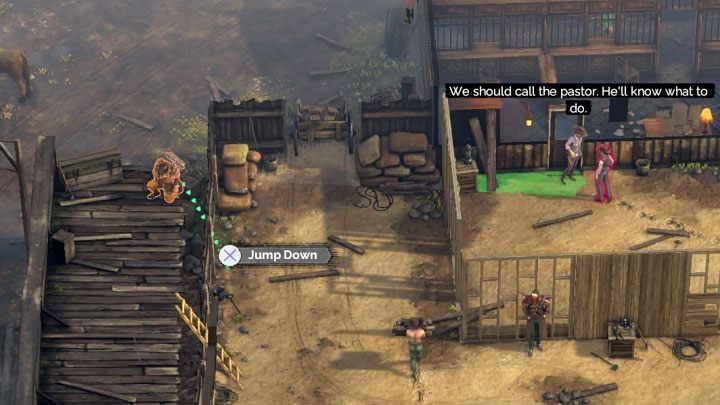 The second option is to look at a building under construction that is adjacent to a side path (M8,12). It's best to send Sanchez to that spot. You can attack the encountered opponents by surprise or take a closer look at the large wall. It is interactive and can be knocked over killing the opponents found underneath it.

Clear the area behind the bank by relying on Cooper and Sanchez's cooperation and using their skills to disorient enemies. Leave the long Coat for last and take care of him as Hector. 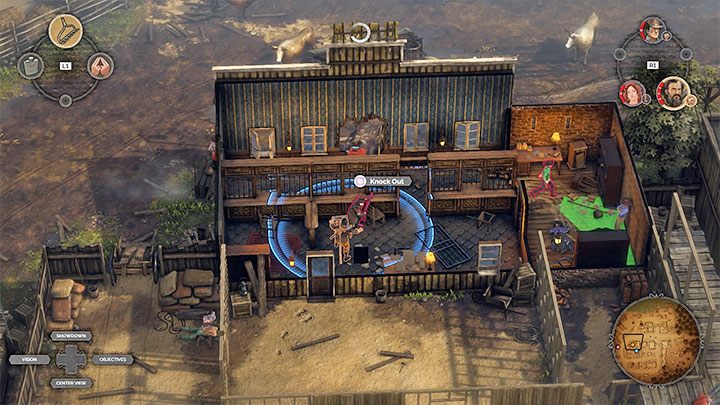 Unfortunately, there is a Long Coat inside the bank building. Wait until the opponent in the green shirt goes the opposite way, quickly attack the Long Coat with Sanchez and hide his body inside the bank or (better idea) in the area behind the bank. Get rid of the "ordinary" enemies from the bank one at a time (through raking and whistling), as well as take care of a poncho-wearing opponent from behind.

Doc is lying on the ground in a side room and unfortunately you won't be able to wake him up. This means you will have to carry him to the boat (M8,17). It is best to leave him here for a while and clear the road leading to the docks (M8,16) first.