This page of the game guide to Desperados 3 contains the second part of the walkthrough of Mission 5 - The Magnificent Five. The new major objective is to kill 5 Long Coats, that is, elite enemies. Our walkthrough explains how to kill all 7 Long Coats and get a badge associated with this achievement.

Our walkthrough for Mission 5 contains references to the map in World Atlas, which can be found on the first page of this chapter. For example, the marking (M5, 7) indicates that you should find the blue point 7 on the map of Mission 5. 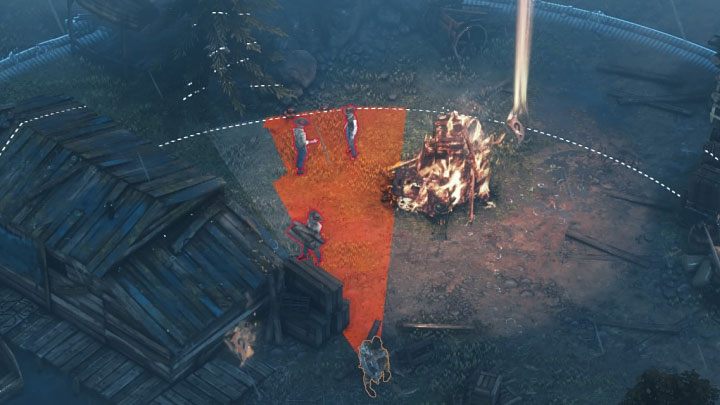 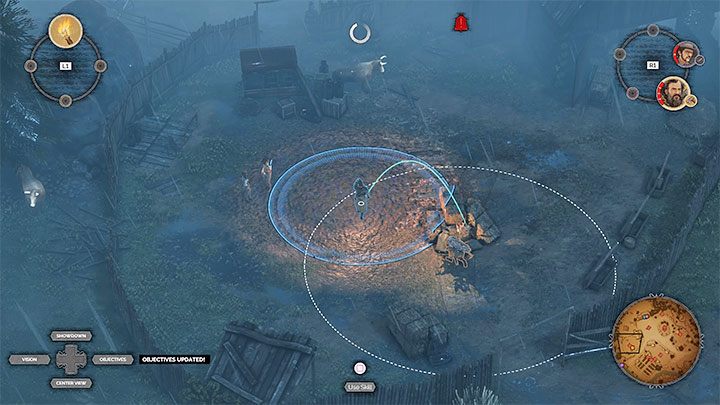 The first Long Coat is in the Cattle Pen, which you passed through in the earlier part of the mission (M5,12). Before you try to deal with an elite opponent, it's worth getting rid of at least a few local enemies. You can use an effective tactic - set some bear traps in specific locations and lure enemies to these places by whistling.

After wiping out most of the enemies in the area you will be able to reach an oil puddle without any problem. Throw a torch into the puddle when Long Coat will pass by. Some bandits who stay nearby the Long Coat may also die due to the flames. 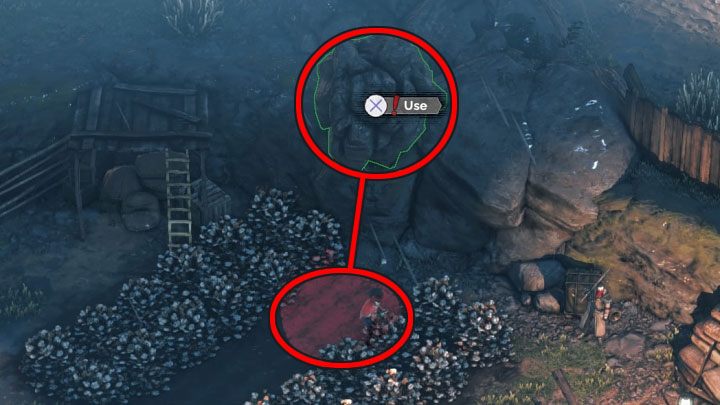 The second Long Coat is resides in the Fields, which is next to where you have taken control of Sanchez (M5,7). Reaching this enemy can be quite troublesome, as the fields of view of enemies are pretty close each other in this area.

One of the more interesting ways to get rid of some enemies from this area is to reach the interactive giant boulder shown in the screenshot. By pushing it you can kill 1 or more enemies. You can also throw McCoy's medicine bag to lure 1 opponent more to the spot in which the boulder will hit. 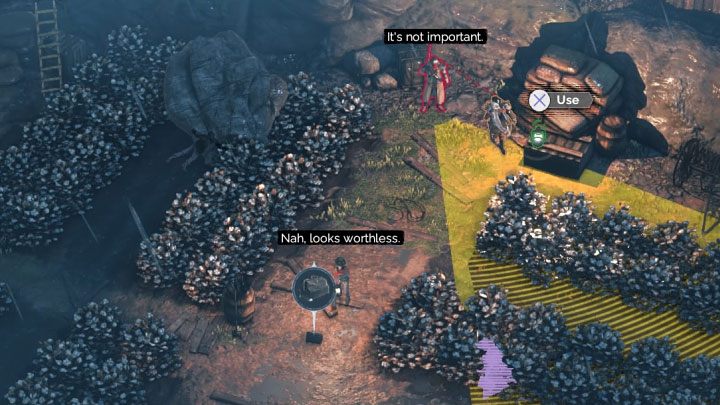 When wiping out enemies located around fields, take advantage of the fact that you can hide in numerous bushes. The Long Coat should be attacked from the back. You can quickly execute an attack on him when a nearby kerosene-lamp opponent moves in the opposite direction, or plan a combined attack with McCoy in the Showdown Mode. 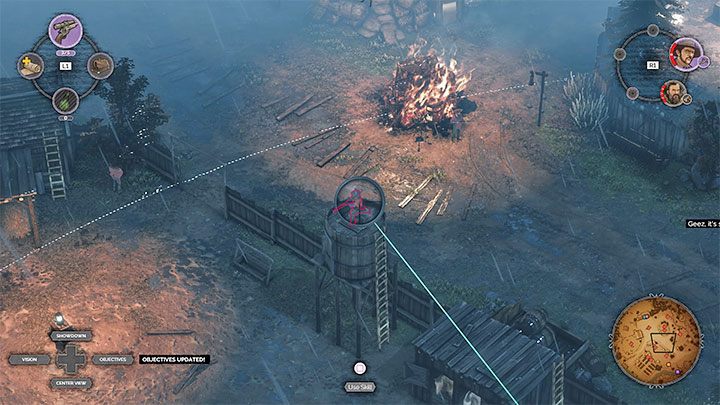 The third Long Coat is near a Horse Pen located in the middle of the map (M5,9). The easiest way to get there is by choosing a path that runs between fields and the river. Along the way you will encounter several opponents. Avoiding and then eliminating them should not be very troublesome.

However, you have to watch out for the first two snipers who have taken positions on the surrounding towers (M5, 13). In both cases, the best option is to approach them with McCoy and use his gun with a scope. On one of the towers, you'll find ammunition for McCoy's gun. 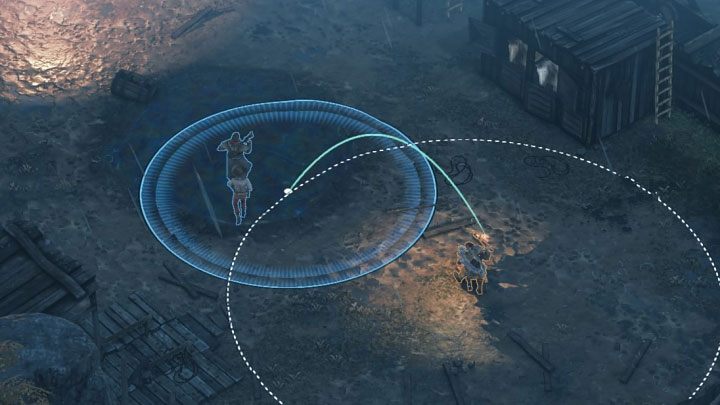 Start again by eliminating as many enemies in the area as possible. You can distract many of them with whistles and the doctor's bag. Collect a new torch after just a few enemies will remain in the area. Sneak around and reach the entrance of the Horse Pen. Then start following Long Coat and his sidekick. Throw the torch when your opponents will walk through a small puddle of oil. 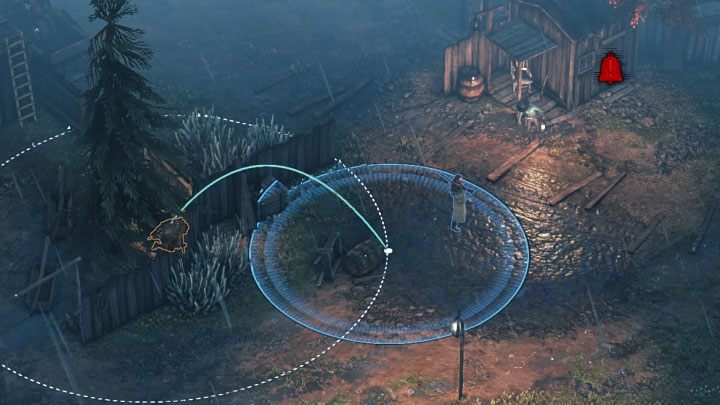 The fourth Long Coat patrols the area near the Ranch Entrance located between the aforementioned two sniper towers (M5,11). In this case, the pattern of action is very simple. Stand with a new torch in the spot shown in the screenshot above. Throw the torch when the Long Coat will stop in a puddle of oil. Of course, if you want, you can get rid of a few more enemies in advance to reduce the risk of triggering an alarm. 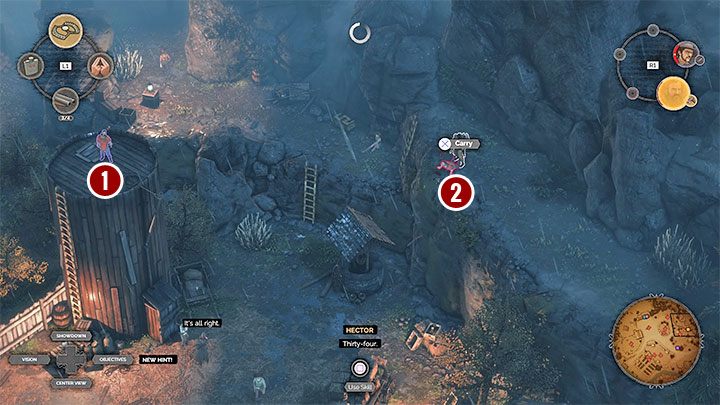 The fifth Long Coat is residing near a Grain Silo located on the ranch (M5,10). Before you make any attempt to defeat this elite opponent, you should deal with a sniper on the roof of a silo (M5, 14). Unfortunately, you can't kill him right away, because the tower is being watched by one of the opponents from the side mountain path (M5, 15).

Select Sanchez and reach the side path. Get ready to prepare a combined action of the two heroes in the Showdown Mode - McCoy should aim his gun at the sniper (1 in the picture) and Sanchez should get ready to eliminate the bandit from the side mountain path (2 in the picture). Once successful, use Sanchez to get rid of all remaining enemies from the side path. It will make it easier for you to get to the last two Long Coats later. Also, you can optionally reach this place with McCoy and open a crate full of sniper ammunition. 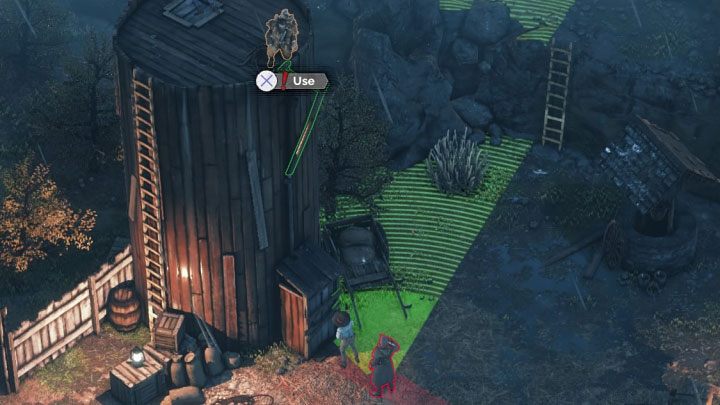 Set off towards the silo - it doesn't matter which hero you will choose. Avoid being detected by a Long Coat. However, you can get rid of a few other enemies from the area. Also, you can distract them.

Climb a ladder to reach the roof of the silo. You can set off an arranged accident here. Wait until Long Coat stops right in front of the silo. Then sabotage the structure. Long Coat and one of the bandits will be killed in the accident. 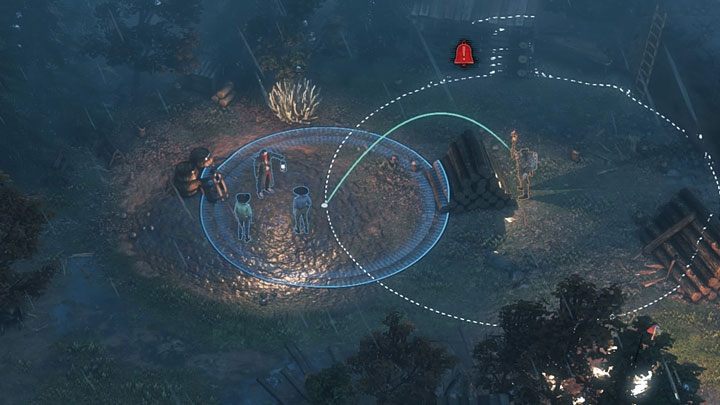 The sixth Long Coat resides in an area adjacent to the Lumber Cabin located at the back of the ranch (M5,7). If you have wiped out all enemies around the side path (M5,15), then you will reach the cabin without any problems on your way.

The best way to get rid of Long Coat is to take a torch with you - sneak into a nearby campfire or return to the bonfire available in the beginning of the mission. Stand behind the wooden logs shown in the picture. Now you can throw the torch into a pool of oil where Long Coat and two bandits are standing. 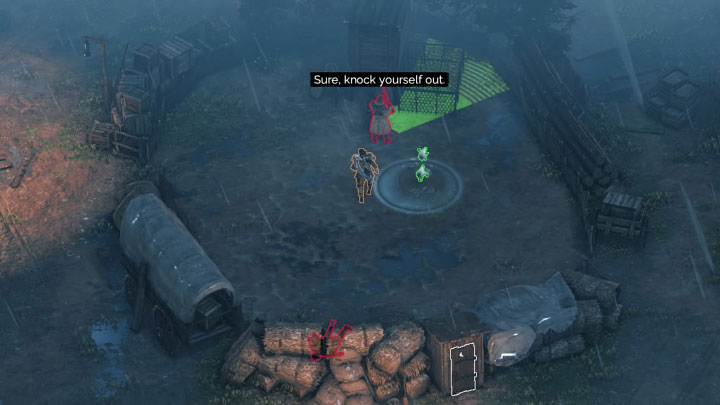 The 7th Long Coat resides near the Chicken Coop (M5,8) located close to the Lumber Hut and the main square. Try to draw away at least 10 opponents by whistling.

Sneak to the chicken coop area only when 2 enemies will be left there - a Long Coat and a guy in a poncho. Don't run in order not to scare the hens. Also, don't get close to them because they'll run away and generate noise. First get rid of the enemy in a poncho, then quickly defeat the Long Coat (you can plan a team combo attack if needed).

Meeting on the roof near the Horse Pen 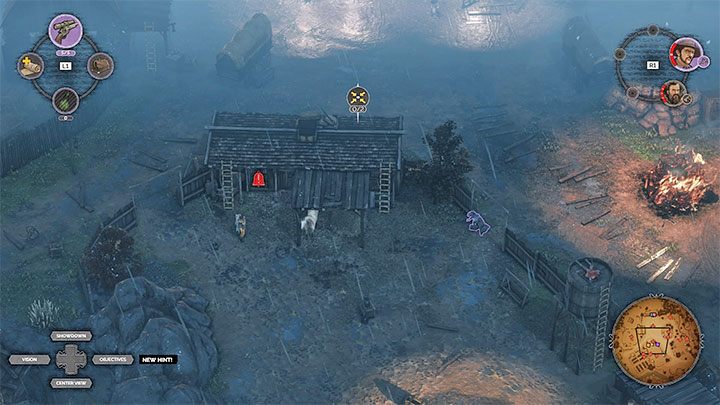 You can advance to the next part of the mission only after you have killed at least 5 of 7 Long Coats. Your destination is the roof of a building next to the Horse Pen (M5,16).

There is a single opponent on the roof and if you don't want to take too much risk you can use Sanchez's whistles to get lure him out the roof and eliminate him in a secluded spot. Get to the roof with Sanchez and McCoy to launch a new cut-scene.