On this page of our world atlas for Desperados 3 you will find a detailed map of Mission 5 - The Magnificent Five. Our map highlights all important locations in the area of the ranch you have to raid, as well as the locations of enemy groups and snipers. We have also included all the challenges (badges) of Mission 5 such as, among other things, the bet between McCoy and Sanchez about who will eliminate more opponents.

The full walkthrough of Mission 5 can be found on the following pages of this chapter. Our guide also contains links and indications that refer to the map. For example, the marking (M5, 8) indicates that you should find the blue point number 8 on the map of mission 5.

Mission 5: Markings on the map

Mission 5 (The Magnificent Five) takes place on the grounds of the O'Hara Ranch, which has been attacked by a large group of bandits who belong to the DeVitt Company. In the first part of the mission, you only play as McCoy. The doctor's objective is to reach the location where Sanchez is currently residing.

After the second playable character gets unlocked, you will be given the task of eliminating 5 Long Coats. It's worth noting that there are more than five Long Coats enemies on the ranch, which means you'll be able to choose targets to attack. Of course, nothing prevents you from getting rid of all elite enemies - this will be rewarded with a badge. The final task of the mission consists in setting fire to a large group of opponents standing around Gatling's gun.

This is the first mission which takes place at night. Thus, you have to avoid light sources in order not to get easily detected by enemies. The game allows you to sabotage certain light sources, as well as eliminate opponents patrolling the terrain with torches. Another unique feature of this mission is the ability to obtain an infinite number of torches. Their main application is to ignite tar oil spilled in different parts of the map.

Cooper and Kate are not available in this mission. They will continue to defend themselves at the main building of the ranch. You don't have to protect them in any way, and this mission also has no time limit for getting rid of opponents attacking the ranch. You can easily eliminate more enemies by controlling McCoy and Sanchez.

In Mission 5 you can collect 8 Badges. We have described all of them below. The challenges are initially hidden, although you may still try to complete them even during the first run-through of this mission. 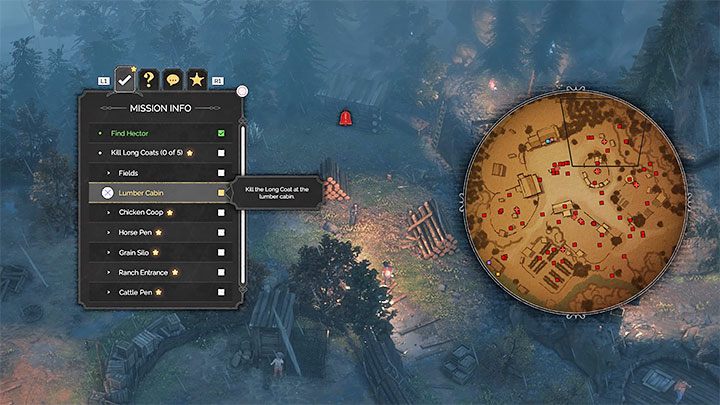 The task of killing all Long Coats is given just after you reach the cabin by the water (M5,2) and release Sanchez who is being imprisoned in the cabin. In order to complete this mission, you have to kill only 5 of the 7 Long Coats, and you cannot ignore any of them if you want to complete the challenge. Kill all the Long Coats before you get McCoy and Sanchez to the roof of the horse enclosure (M5,16), as this will advance you to the final part of the mission.

Finish the mission without using a torch

Leave this challenge for another run-through on easy difficulty level. In order to unlock it you have to eliminate 5 Long Coat enemies and other opponents gathered around the gatling gun (M5,17) in a traditional way. As a reminder, you can kill Long Coats with a sawed-off shotgun or by using the melee combat option (Sanchez has this ability). This challenge will significantly hinder and lengthen the mission as many of them can be easily killed by using torches and oil stains.

This is another challenge that is worth unlocking when you replay the mission on a easy level of difficulty. Remember to make sure before each attack whether an opponent is being watched by other enemies. Choose simpler Long Coats to eliminate and rely on torches - this way it's less risky than fighting them in a traditional way.

Win the bet with Hector 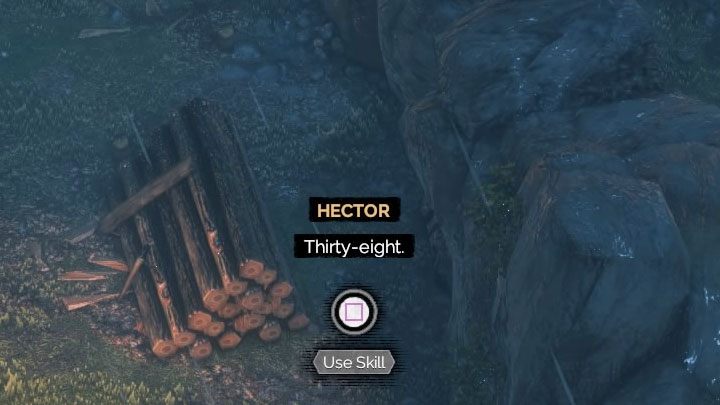 This challenge, as described below, concerns the bet between McCoy and Sanchez on who will eliminate the larger number of opponents. The bet will begin after you release Hector from the house on the water (M5,2). Unfortunately, you can't complete both challenges in a single run-through of the mission.

The bet is much easier to win with Hector, because by controlling it in a much simpler way you eliminate your opponents and hide their bodies. After each kill every hero will remind you how many enemies he has already defeated (38 in the example from the picture above). It'll make it easier for you to track who's in the lead.

Win the bet with McCoy

In order to complete this challenge it's worth replaying the mission on the easy difficulty level. Eliminating enemies is harder and more time-consuming by playing as McCoy. Try to make a swift run-through instead of killing everyone on the ranch.

You don't have to completely ignore playing as Sanchez, but try to limit the use of his ability to attack Long Coats and harder-to-reach enemies. You can also assist McCoy with whistling. The very moment of eliminating an enemy is the thing that matters here, that is, when you play as the doctor. 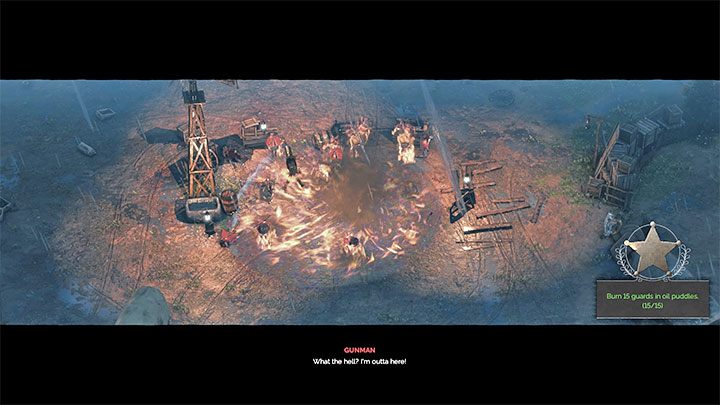 This challenge forces you to guard yourself throughout the entire mission and set fire to as many enemies as possible by throwing torches into the puddles of tar oil. Whenever possible, always wait until there are 1-2 additional opponents near the Long Coat enemy that stands near the oil puddle.

The final part of the mission is also important, in which a large puddle near gatling gun (M5,17) must be ignited. Throw the torch after many enemies will gather around the oil puddle. Also, don't kill them too early by any other ways. For example, don't distract them with a whistle or a doctor's bag.

Make sure to play on a easy level of difficulty. This will reduce the number of encountered opponents. Elite Long Coats should also have a lesser number of guards at their disposal. Limit yourself to eliminating only the 5 required Long Coats and select those which were the easiest to defeat during your first run-through of the mission. In the final part of the task, focus solely on quickly throwing the torch, even if it is risky - the mission will end immediately after you set enemies on fire near the gatling gun.

This difficulty level is the best choice to complete the mission for the first time, although playing at a high difficulty level it may prove more troublesome to reach some enemies (for example, the one who resides in the field). Fortunately, this challenge doesn't have a time limit, and you can save your progress freely.