On this page of our guide to Desperados 3 you can find the third part of walkthrough of mission 4 - Until Death Do Us Part. After Mayor Higgins is murdered, Cooper and Kate have to flee the estate. In our guide we have included information on how to get out of the property and how to get a disguise for Kate, which will make your escape much easier.

In our walkthrough of mission 4 there are references to the map included in the world atlas, which you will find on the first page of this chapter. For example, a marking (M4,5) indicates that you should find the blue point with number 5 on mission map 4. 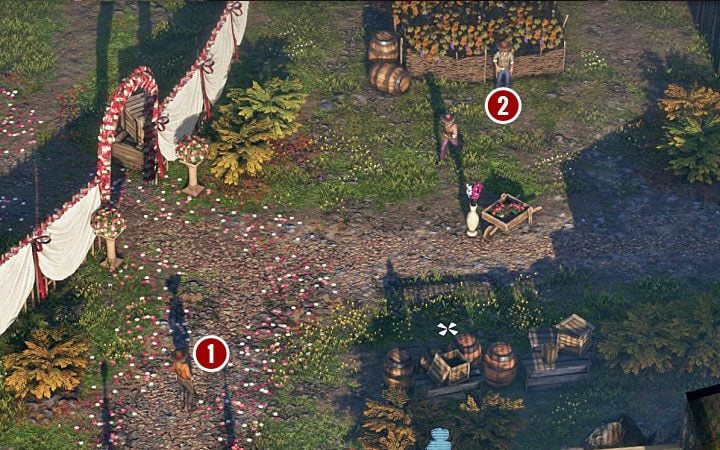 After watching the cut-scenes, Cooper and Kate will be on the northern balcony (M4,2), where you previously blinded the opponent wearing a poncho. There are two variants of escape from the estate.

A more obvious escape option consists in Kate reaching the location of the disguise in order to make it easier for Cooper to eliminate or bypass opponents he encounters on his way out of the mansion. Jump down into the bushes. Your characters have to get to the wedding field (M4,14), but unfortunately the road is blocked by several guards. Wait until there are two guards in place 1 indicated in the above picture and blind them with Kate's perfume. At the same time, use Cooper to throw the knife at the opponent standing in spot 2 (it's worth approaching him earlier). Quickly hide his corpse in the bushes. Behave in a similar way to wipe out all remaining thugs - quickly blind one of them and eliminate the second one. Then, hide the bodies. 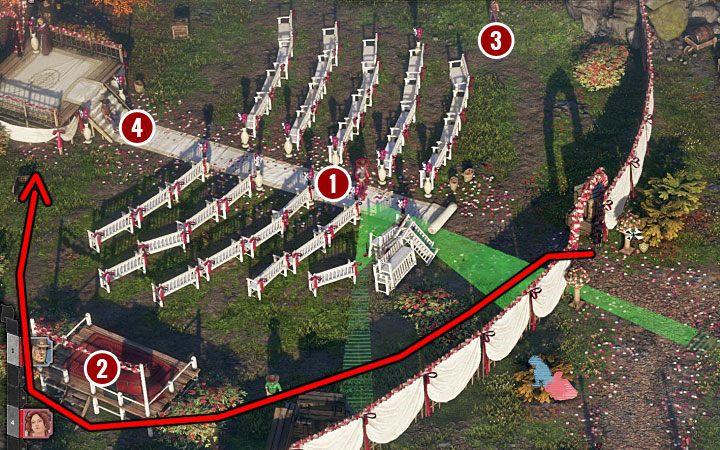 There are five opponents on the wedding field (M4,14), and you should defeat just four of them. 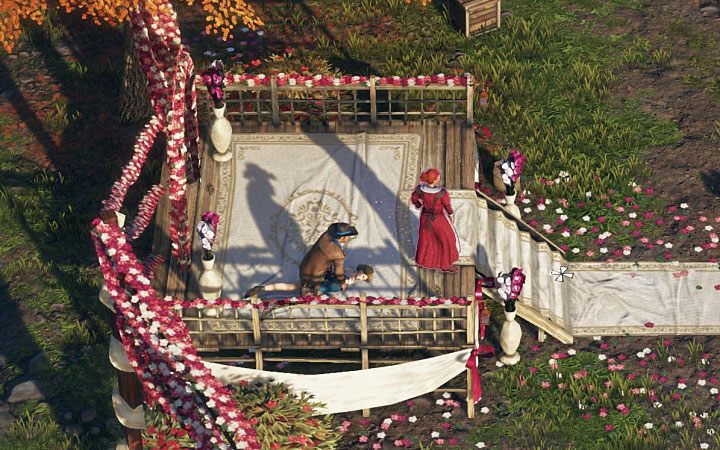 The main purpose of visiting the wedding field is to reach the altar where the maid is staying (M4,15). After stunning or murdering this character, select Kate, activate interaction mode (press CTRL key - PC version) and click on the maid. Kate will get a disguise. She won't equip it automatically - you have to choose the disguise from the skill bar (press the G key - PC version). Here are some of the most important things about disguise: 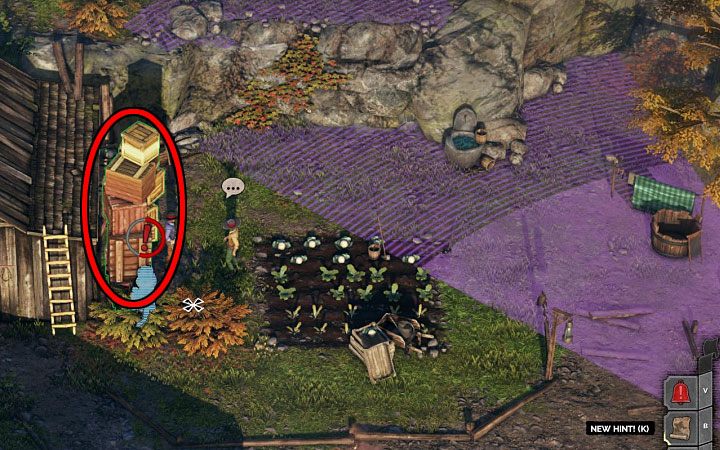 Head towards the northern path (M4,16) and allow Kate to act. Bypass a group of civilians and flirt with the incoming opponent. Make sure to position yourself properly so that Cooper can get close to the enemy and eliminate (or bypass) him. You can also attack the opponent wearing a poncho, but make sure no one notices the moment of the attack.

The picture shows a tower made of crates (M4,17), which you can optionally drop on two talking opponents (move Cooper on the roof and jump into the bushes). But before you do that, use Kate to flirt with an opponent east of this area. This will ensure that the moment of the accident cannot be noticed by anyone. After the chests have crushed the enemies, no one will find their bodies anymore. 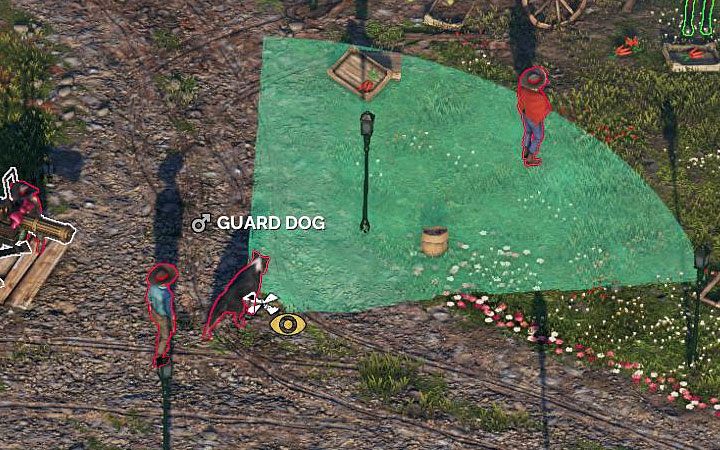 Move Cooper to the stable (M4,18). It's very easy to get through this location - after Kate starts flirting with one of enemies, eliminate him by using Cooper. Do the same with the other guard. Hide their bodies in the hay.

Go to the central square (M4,19). The most serious threat here is a guard traveling with a security dog. As we've already mentioned, a dog can "expose" Kate even if she uses a disguise. The cone displayed when you select a dog has a slightly different effect. It symbolizes the distance from which the animal can be seen OR the distance from which the animal can sniff out the hero, even if the character is hiding in the bushes. The cone itself is fortunately small in size, but it still "intertwines" with some of the guards passing by and the bushes in the central square. 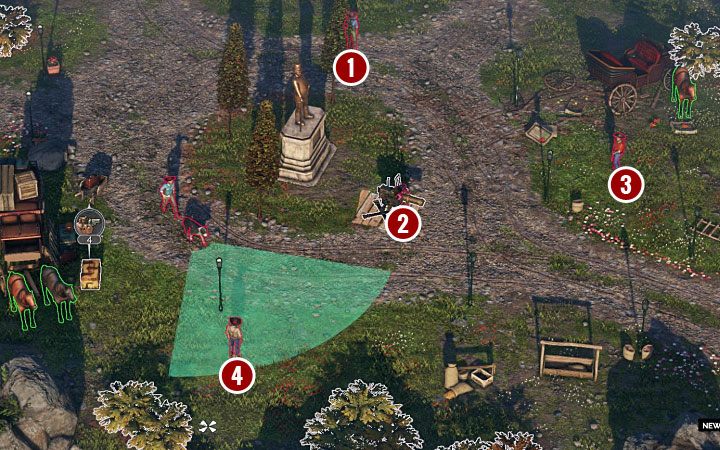 Don't try to get rid of the security dog or its owner. Instead, focus on using Kate's disguise to allow Cooper to reach the path south of the entrance to the property. We are talking here about the ivy (M4,9), which Cooper used before just after appearing on the map.

Don't try to use the turret unless you play at a easy level of difficulty. Using it will alert the entire area and you can easily die from gunfire from different sides. The mission can be completed without triggering any alarms. 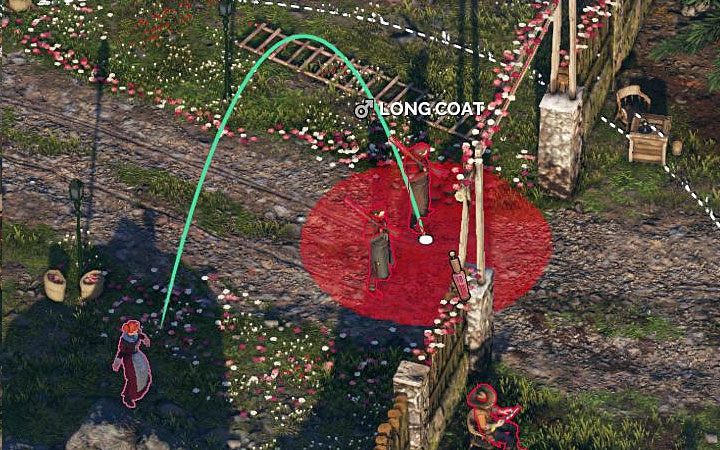 After Cooper can go south, use the wall of ivy and hide in the bushes. Switch to Kate, reach the guarded entrance of the property (M4,8) and use perfumes on Long Coat opponents. After you blind them, quickly run outside. Hide Kate out of sight of Long Coat enemies because they can attack her even if she is standing outside of the estate. 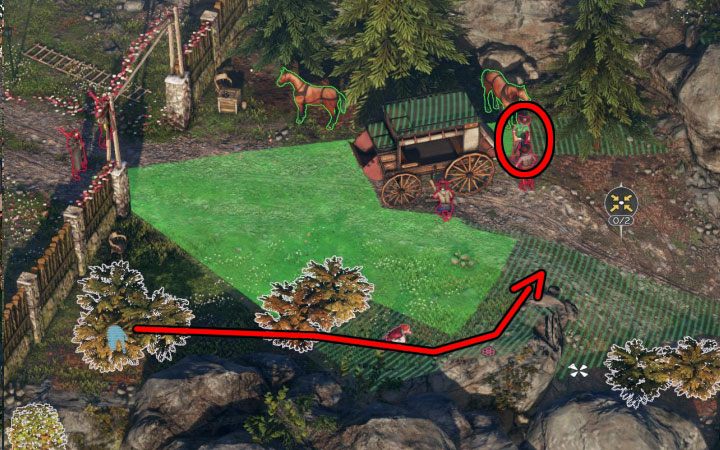 Get rid of two guards next to the bushes (while playing as Cooper) - one of them is standing, the other one is sitting in a chair. Hide both bodies in the bushes. Sneak Kate to the right, staying on the border of Long Coat's field of sight - the suggested route is shown in the attached picture.

Use Kate's flirt on the opponent that wears a green shirt (marked in the picture). After he turns right, Cooper can sneak through the same way. As soon as Cooper approaches the end of the mission (M4,1), a cut-scene will launch. 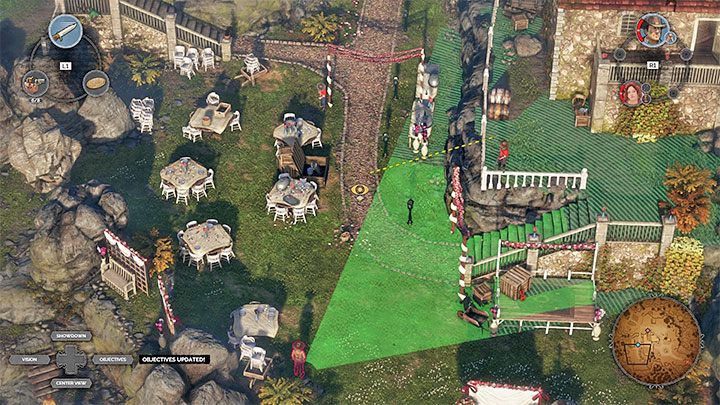 There is also a less obvious alternative way of escaping from the estate. Cooper and Kate have to sneak through the south side of the garden (M4,11), which is the same path Cooper had previously used to sneak into the property. There are guards patrolling the garden but you can use Kate's perfume to blind them and Cooper's coin to distract them. It will allow you to eliminate them one at a time. 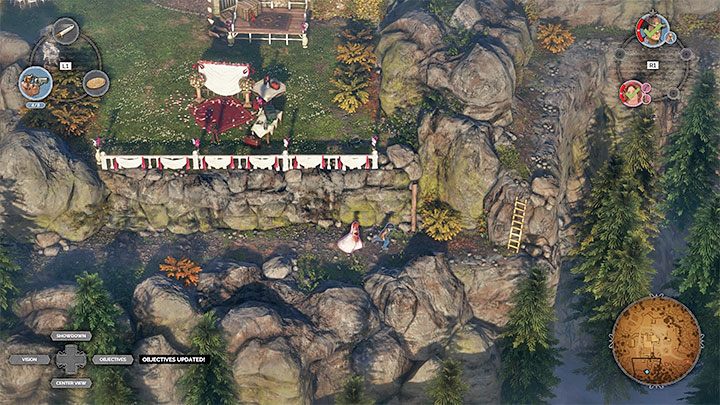 Kate and Cooper can use the southern path (M4,10) leading to the main courtyard in front of the estate (M4,19).

The final part of the mission is very similar - you have to blind Long Coats guarding the main entrance (M4,8) and sneak around to reach the bushes. The only exception is the need of using a coin on the guards standing near the car (M4,7), as you can't rely on Kate's flirting ability if you have selected this path.