On this page of our world atlas to Desperados 3, you will find a detailed map of mission 4 - Until Death Do Us Part. On our map we have marked all main locations of the property's area. At first, only Kate can explore them, but later Cooper joins her too. In our guide we have also included descriptions of challenges (badges) of mission 4 - you have to get Cooper to the estate by using an alternative route and kill 15 enemies with Gatling Gun.

The full walkthrough of mission 4 is available on the next three pages of this chapter. Our guide also contains links and references to the map. For example, a marking (M4,5) indicates that you should find the blue point with number 5 on mission map 4.

Mission 4: Markings on the map

Mission 4 (Until Death Do Us Part) takes place on Mayor Higgins' estate. This task consists of three large parts. In the first part of the mission, you take control of Kate, who is supposed to get married to Higgins. Of course, her real plans are completely different and Kate wants to sneak into the mayor's office. In the first phase of the mission, Kate can move freely through the public areas of the property, but she will be attacked if the guards detect her inside the building.

After advancing to the second part of the mission, Cooper will appear on the map. He has to join Kate in the Higgins office. Unlike the aforementioned heroine, Cooper is not a welcomed guest and this means that you have to sneak in. The most demanding is the third part of the level where Cooper and Kate have to escape from the property together. A slight consolation is that in the final part of the task a very important mechanics of using disguises will be introduced. It will allow Kate to bypass the guards without sneaking around and flirt with them to clear the path for Cooper.

In mission 4 you can get a total of 8 badges. We have listed and explained them below. Challenges are initially hidden, although you can complete them during the first playthrough of the mission. 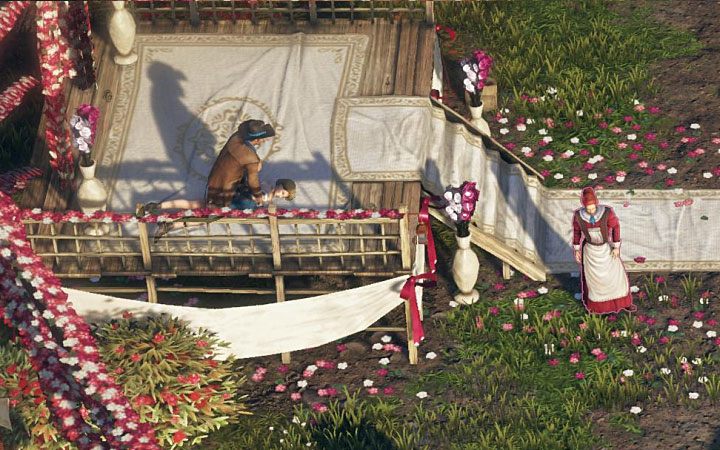 This challenge is not very difficult, although it requires you to choose an alternative way to complete the mission. This challenge consists in using a disguise and wearing a housemaid clothes, which Kate can put on after attacking a woman on the stage in the northwest corner of the map (M4,15), the place where the wedding was supposed to take place. 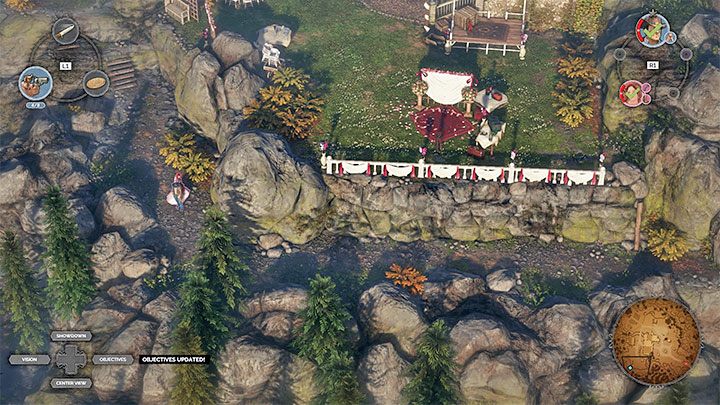 Not being able to use a disguise means that you won't be able to easily confuse your opponents by playing as Kate so that Cooper can attack them from behind or easily bypass them. In order to complete this challenge you need to choose the southern path (M4,11) to escape from the estate, which is the same one Cooper may have previously used to sneak into the main building of the estate.

Take a photo of the dead groom 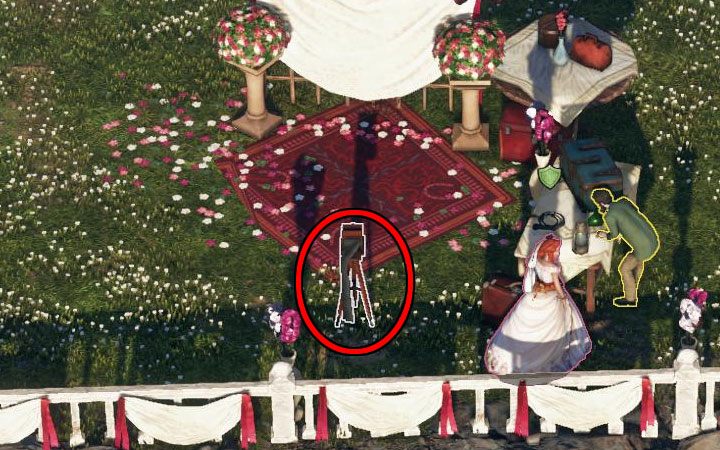 Also, it is best to achieve this challenge when you replay the mission on a easy level of difficulty. Of course, Mayor Higgins is the groom. You have to complete the first two parts of the mission, so you have to get Kate and then Cooper to the Higgins office inside his property (M4,6). Then, watch a cutscene during which Higgins will be murdered.

The challenge consists in moving the Higgins corpse to the location of the photo camera. This is the southern part of the garden of the residence, the place where you started your mission (M4,1) - we marked the camera in the picture above. The Higgins' corpse must be removed from the building. Then pick up his body and head south. This means getting rid of many guards and civilians who could be left in peace during the typical completion this mission. Of course, it's worth relying on the cooperation of the characters - for example, you can blind some enemies with Kate's perfume so that Cooper can handle them. Playing on easy level of difficulty will make it easier for you to avoid detection or deal with a threat if an alarm was triggered.

With Cooper, enter the building through the main balcony door 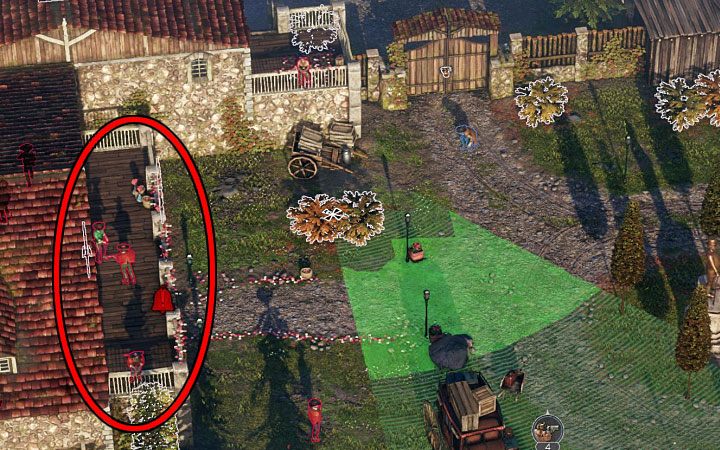 This is another challenge that is worth leaving for later. Try to unlock it when you replay the mission on the easy difficulty level. You can take care of it while completing the second part of the mission, after Cooper appears at the eastern end of the map (M4,7). The challenge forces you to reach the Higgins' office (M4,6) by choosing a much more difficult path, that is, by using the door on the eastern balcony of the property (M4,20) instead of the south path that bypasses the residence. This place is shown in the picture above.

In order to ensure that you can reach the balcony safely, you need to eliminate many of the enemies that wander around you. The opponent standing by the northern railing, who is watching the area, is also very problematic. Distract him from time to time with a coin or shoot him and quickly hide in the bushes while triggering an alarm. Unfortunately, there's a point in the vicinity where reinforcements may arrive.

Don't use the Gatling Gun

Kill 15 guards with the Gatling Gun 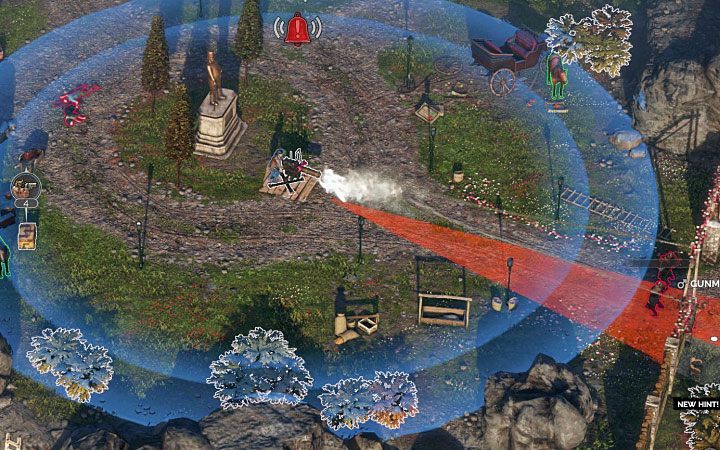 This is the opposite of the challenge described above. In this case you not only have to interact with the Gatling Gun from the central square (M4,19), but also shoot at least 15 enemies by using it. It's a weapon of great firepower, but it's still easy to die when the enemies fire at you. The best option is to unlock this challenge when your replay the mission on a easy difficulty level.

Once you've taken control of the Gatling Gun, start by shooting Long Coat enemies guarding the entrance of the property, then turn around and focus on those enemies who have started firing at your character or are preparing to do so. Remember, you still have to complete the mission after killing 15 people. When the area becomes safe, leave Gatling Gun and start running towards the mission extraction point or hide in the bushes and wait for the alarm to end.

Kill everyone except for the civilians

Unfortunately, this is a very time-consuming challenge. Do not try to complete it on any other difficulty level than easy. The most problematic issue is to wipe out the concentrated groups of enemies who reside at specific locations. Look for opportunities to blind a few enemies with Kate perfumes and try to quickly deal with them by controlling Cooper.

Of course, you can attack civilians on the map, but you have to stun them and tie them up. Make sure that no innocent person gets killed by accident throughout the mission.

Make sure to play at easy difficulty level to be able to avoid enemies faster and generally have a greater margin of error. Try to complete the first part of the mission in no time and quickly go through the southern part of the map in the second part. The most difficult and time-consuming thing is to escape from the property together after murdering the mayor.

This is the best choice to complete the mission for the first time. It should be noted that silent disposal of some enemies can be quite demanding, as you can easily be spotted by someone else. You can make it easier by constantly using Kate's skills, especially her disguise.