This page of the Desperados 3 guide contains the third part of the walkthrough for Mission 11 - Burn The Queen The final part of our walkthrough is devoted to the infiltration of the Queen, a huge steamer located in the swamps. Our tutorial, among others, tells you how to get onboard the Queen without being noticed, how to set the Queen on fire, and where to get to after reaching all the main objectives of the mission.

Our walkthrough for Mission 11 contains references to the map in World Atlas, which can be found on the first page of this chapter. For example, the symbol (M11,5) means that you should find the blue dot with the number 5 on the map dedicated to Mission 11. 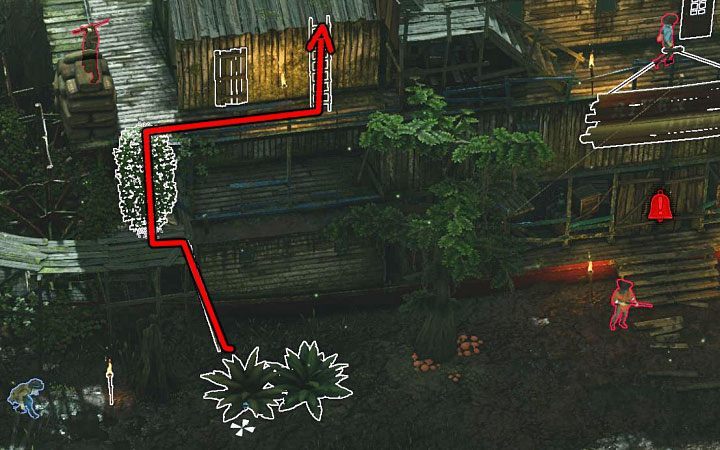 The ship called Queen is located in the northern part of the map (M11,18) and, unfortunately, is carefully guarded by the enemy. You should be especially careful with:

The presence of all these enemies makes it much more difficult to infiltrate the ship, because you can get detected easily, and it is tough to eliminate them without alerting nearby opponents. We recommend that you sneak up as Cooper or Isabelle to the ladder on the left side of the ship (M11,15). After using it, you can climb the ivy and reach one of the upper decks. 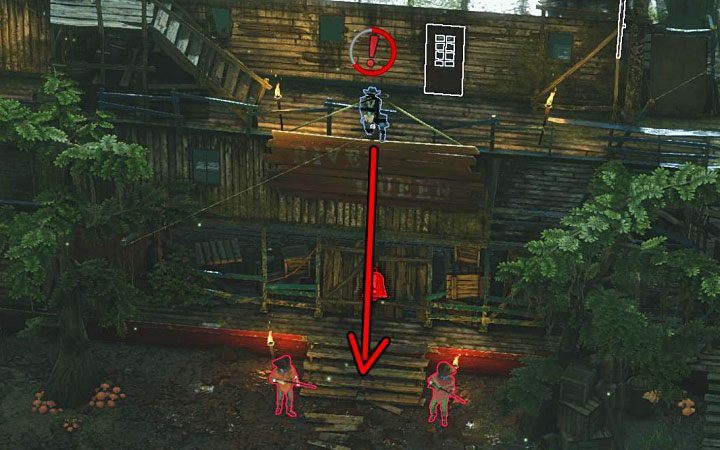 Head to the roof of the steamer (M11,18), but watch out for nearby Long Coat and a sniper standing on a small tower. The sniper can be shot (Buntline), but do it when Long Coat looks in the other direction.

One guard is patrolling the upper deck. Wait for the right moment to go after him and get rid of. This location is a great place for an area kill. You can throw down the planks marked in the image which will fall on the poncho-wearing enemies standing underneath them (M11,16). Their death (in a staged accident) will make it easier for the rest of the team to approach the steamer from the right side. 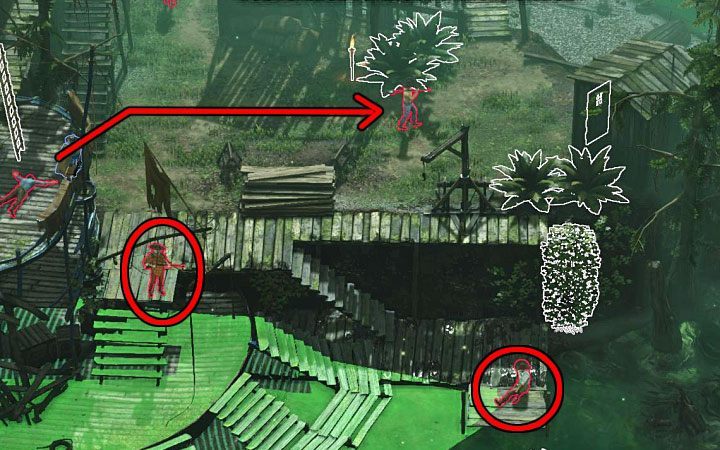 Do not rush to send your men to the right of the ship, because this area is guarded by several enemies. Make use of the fact that Isabelle and Cooper can climb ivy and use them to reach the upper decks of the steamer.

Deal with the enemy equipped with a shovel. Now, take care of two guards shown in the image above. It is best to get rid of them in a combined attack using the Showdown Mode. Once you clear the right side, all heroes (and Wayne) will be able to get to the extraction area. 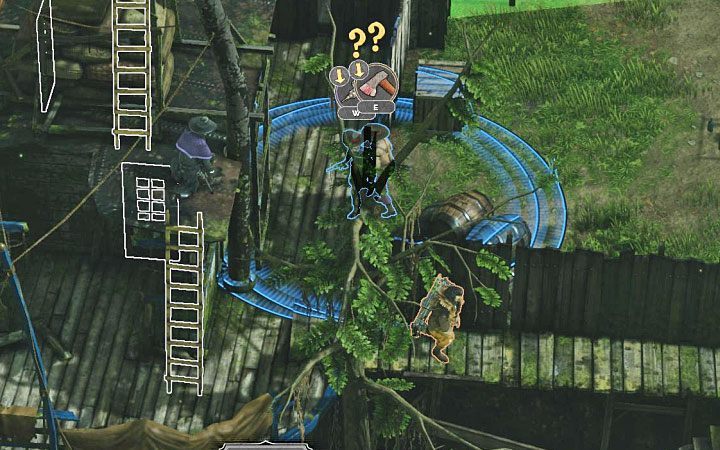 Sabotaging the Queen is not easy, because the barrel is on the highest deck of the ship (M11,18) and is guarded by the aforementioned Long Coat. An attack on him will be seen by enemies from the northern camp (M11,19).

The best solution to this problem is to pull enemies from the northern camp to the area on the right. For this purpose, you can use, for example, Hector's whistle. However, you should be prepared for the fact that some enemies travel in pairs and as a result will go explore the place together. Of course, Showdown Mode will help you here - plan your approach to eliminate a group of opponents in a single action. 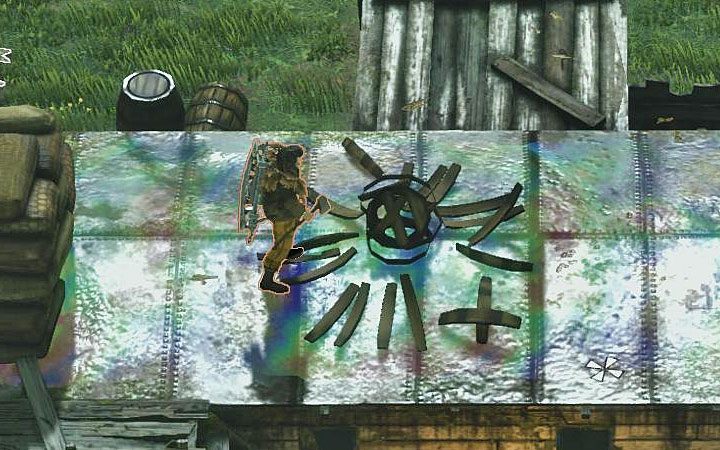 The last enemy from the northern camp guards two boxes of ammunition (M11, 7). You can sneak up on him using the bushes, or shoot him using McCoy from the tower used by one of the snipers which you have eliminated before. The alarm won't be raised if the moment of death isn't seen by the Long Coat.

Use Hector to reach the roof of the steamer (M11,18) to get rid of the Long Coat. As Hector, destroy the barrel so that the oil will spill all over the ship. 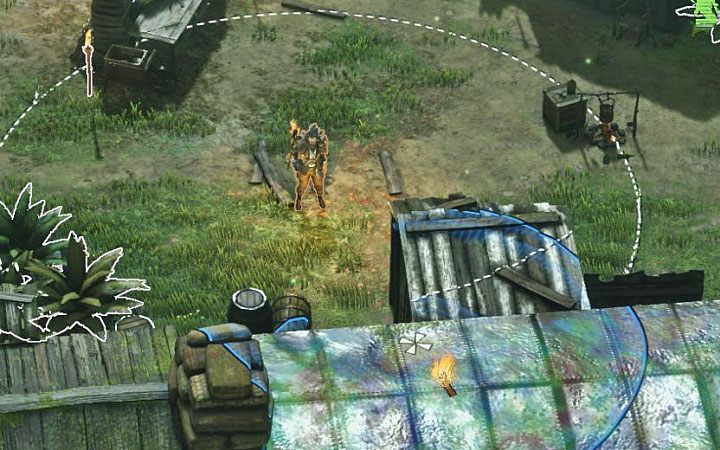 Select any character and pick up any of the burning torches (PC version - press CTRL and click on the torch).

Perform the torch throw action (PC version - press A) and make it land in any place where oil is spilled. The Queen will be engulfed with flames and you will reach the most important goal of the mission. 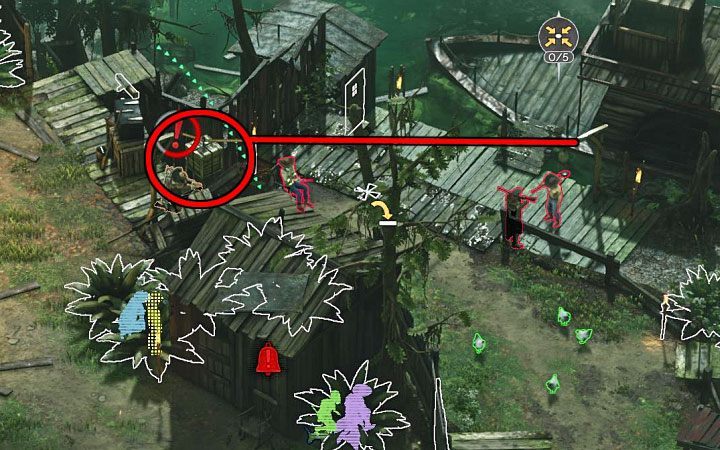 The last part of the task involves getting onboard a small steamer (M11, 21) and using it to escape the map. Check the nearby mechanism (M11,20) that allows you to push the box. Wait for the two enemies to line up at the bottom, and take care of them both through a tragic accident.