This page of the Desperados 3 guide contains the first part of the walkthrough for mission 11 - Burn the Queen. Our step-by-step guide explains how to safely lead all playable characters through the marshlands. This is done in order to get to the village, which serves as a background to main goals of the mission, which involve rescuing prisoners and setting the Queen on fire.

The heroes are in two remote locations around the map - Hector and Isabelle are in the southeastern part of the marshlands (M11,1), while Cooper and McCoy begin in the western end of the map (M11,2). All team members must find their way to the village (M11,12). Heroes can reach the village in any order, and you can switch between them at will. You don't need to follow this walkthrough closely.

Our walkthrough for Mission 11 refers to the map in the World Atlas, which can be found on the first page of this chapter. For example, the symbol (M11,5) means that you should find the blue dot with the number 5 on the map dedicated to Mission 11.

Bringing Hector and Isabelle to the village 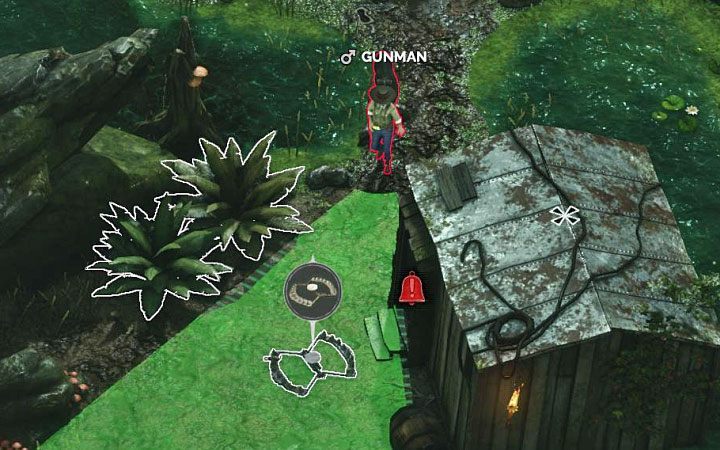 Not far from the start of the mission, there is a sleeping enemy and a sentry patrolling the area with a guard dog (M11,3). From the very beginning of the level, remember to avoid running when in shallow water - this creates additional noise and may alert the surrounding enemies. You can enter the water, but stay crouched when moving.

You can get rid of both bandits by using bear snares - you can lure the sleeping enemy away using Hector's whistle, and follow that up with placing snares on the patrolling guard's route. Remember to sneak up behind the guard dog and kill it before it starts barking and alarms the enemies nearby. 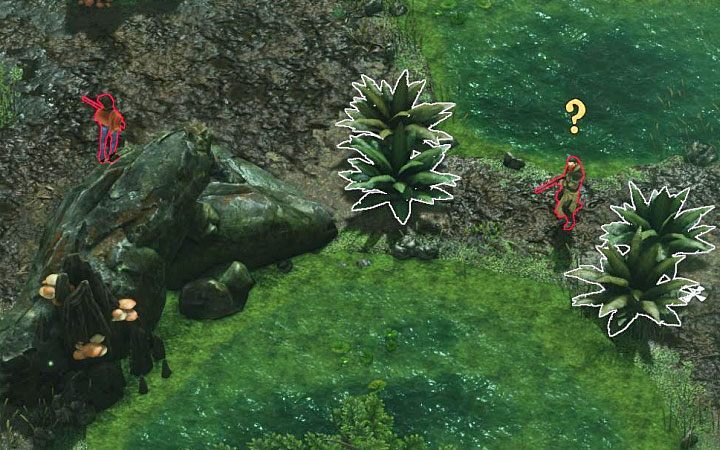 North from the starting area, Hector and Isabelle will come across a wreckage of a steamer (M11,4), - there are many enemies in the vicinity of it. Again, watch yourself when crossing shallow water. Watch out for the enemy standing on the roof of the wrecked steamer, because he has a large view cone. Stay out of his reach or use nearby boulders and other obstacles.

The area is guarded by a Long Coat. To take care of him, you can use the trick described in the previous page of this guide - leaving footprints in the mud. This will allow you to lure the Long Coat away from other enemies. Do so in a location where Hector will be able to kill him without raising an alarm. 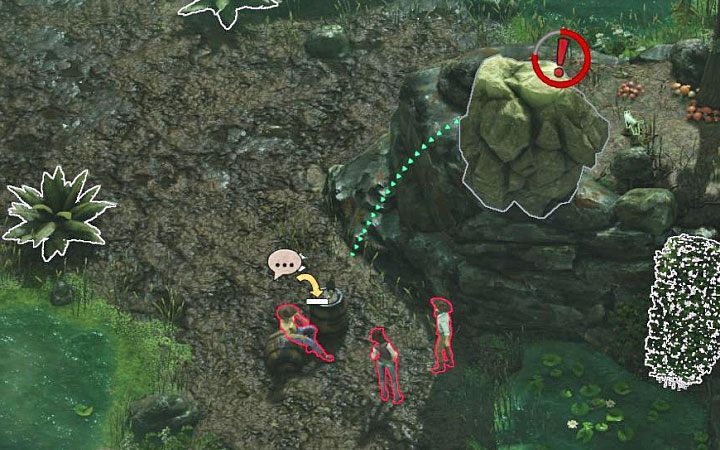 Head north-west. Along the way, Isabelle will be able to climb the ivy and reach a ledge with a large stone (M11,5) You can push this boulder to kill 2 or 3 opponents. This action, of course, will be viewed as an accident.

It's a good idea to combine pushing the boulder with getting rid of other enemies that will come to investigate the crash site. They can be eliminated by Isabelle (Connection will be very useful) , or in the meantime, you can bring Hector here. 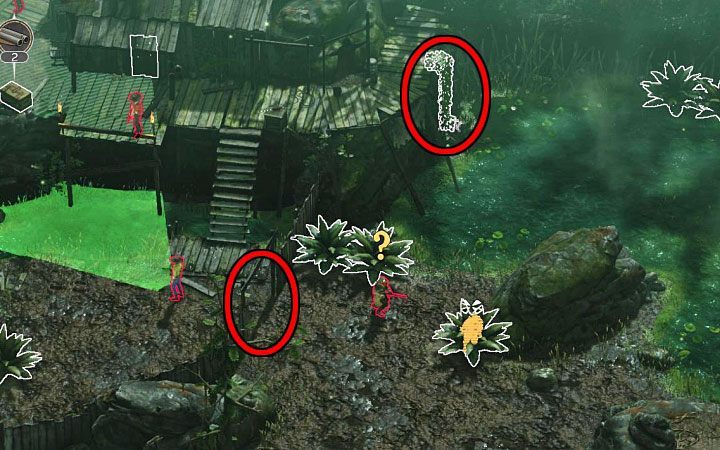 The southern part of the village can be accessed by two main pathways (M11,6) - we've marked them in the attached screenshot. The main entrance can be used by both characters. The ivy located north of it is "reserved" for Isabelle.

After reaching the village with Hector and Isabelle, it is worth making an attempt to lure another Long Coat using the footprints on the mud. This will make it easier for you to continue your mission after Cooper and McCoy get to the area. Pull Long Coat to the east to not get detected by the southern sniper or any other enemy.

Bringing Cooper and McCoy to the village 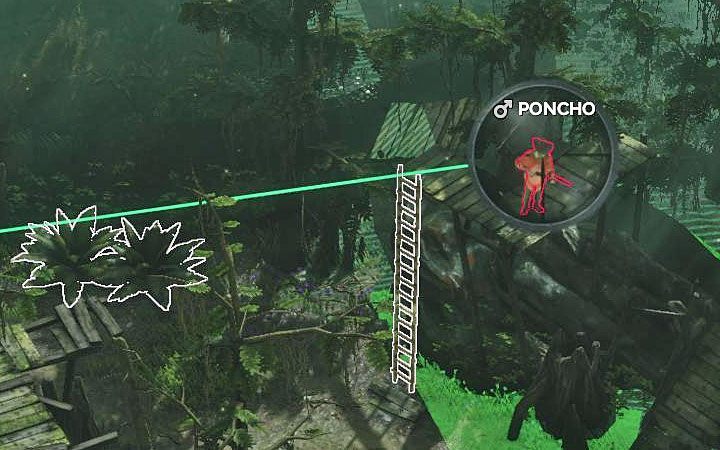 Cooper and McCoy starting area is harder than Hector and Isabel's. You'll encounter much more enemies, and it will be difficult to get past them because of the very limited playing area. Start with eliminating a guard south from your starting area (distract him using the medical bag) and take care of the sniper standing on the eastern building (M11,7).

When it comes to the sniper, use McCoy's Buntline pistol, but remember to avoid letting the moment of his death be recorded by another sniper walking along nearby bridges (M11,8) . 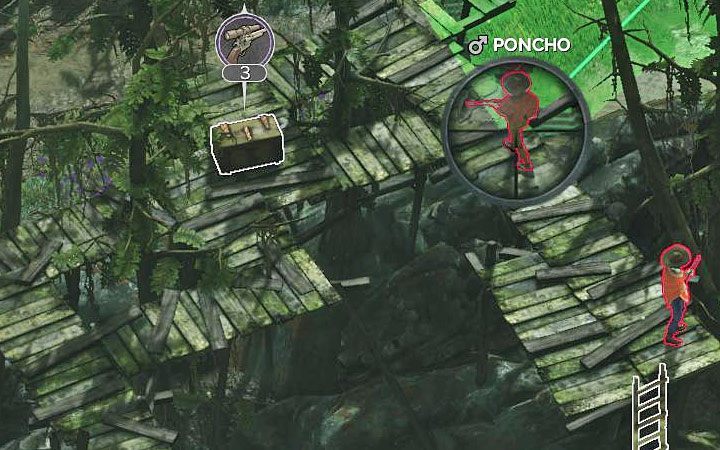 The walking sniper from the upper bridges (M11,8) can also be eliminated. Do this when he is on a patrol away from the other three snipers. Making your way to aforementioned bridges is very recommended. You can use one of the two ladders, and on the way to them, you must keep an eye on a group of standard opponents and a guard dog(wait until it goes south and follow it).

Once you reach the bridges, you can easily kill all 3 snipers - all of them are immobile. You will also find a box of Buntline ammunition that will help you with challenges ahead. 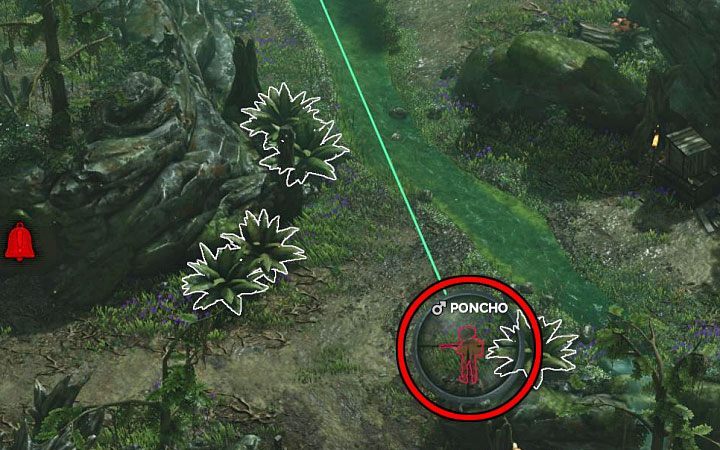 Lead the characters south-east. Most opponents are easy to get rid of, for example, by relying on combined attacks in Showdown Mode or by distracting them. An exception is a poncho-wearing opponent guarding a narrow passageway (M11,9). We recommend that you shoot him using Buntline.

There are 3 more enemies west of the specified enemy, but you can ignore them. You'll also encounter a dog, but same as with the previous one, wait until it goes the other way. 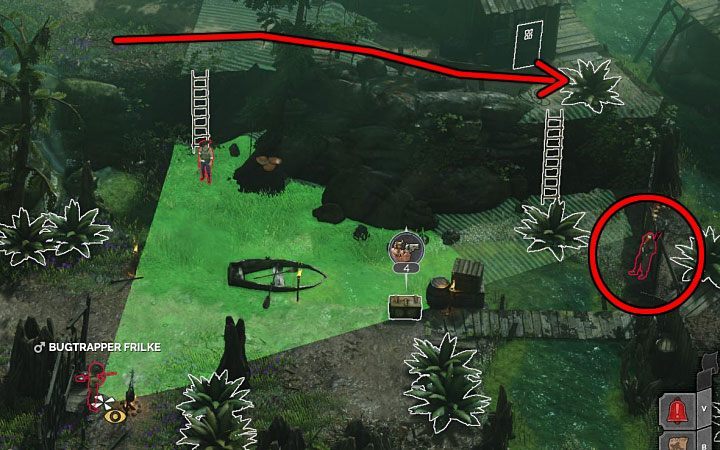 A little further ahead, you will meet two opponents. Attacking them is easy, but you should be careful, as there is a Long Coat located east of this place (M11,10). Attack his companions when they are out of his sight.

Cooper and McCoy, unfortunately, can't kill Long Coats. You can use the upper passageway (M11,11) which allows you to skip the opponent. Alternatively, you can switch to Isabelle and Hector, and, after clearing the southern part of the village, approach this location as Hector. He is able to kill or stun Long Coats.