On this page of our guide to Desperados 3, you will find the second part of our walkthrough of mission 9 - Louisiana Voodoo. With our walkthrough, you will learn how to sneak near the easter cabin, how to deal with Long Coat, and how to rescue McCoy without raising the alarm. This isn't easy due to the numerous enemies found in this area. Also, your heroes can be spotted even by opponents standing far away.

Once you free Isabelle and reach the vantage point, you can rescue other heroes in any order. You don't have to follow our walkthrough.

Our walkthrough for mission 9 refers to the map in the world atlas, which can be found on the first page of this chapter. For example, a marking (M9,5) indicates that you should find the blue point with number 5 on mission map 9. 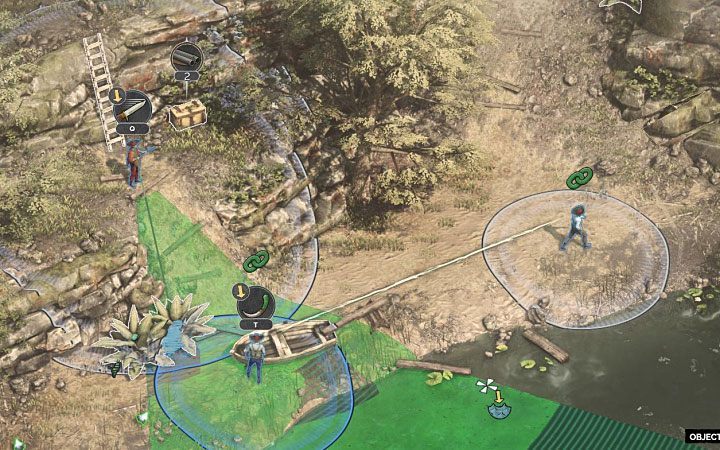 Doc McCoy is kept in the basement of the eastern cabin (M9,2), south of the place where you have helped Cooper. The fastest way is to get there from the north. However, this isn't the best idea. There are two enemies standing north of the cabin (M9,7), the third enemy joins them from time to time. The problem here is that the enemies from the south can spot the attack.

You can access the area south of the cabin (M9,8) by swimming under the bridge (M9,10). Sadly, this is another place where you can get spotted you fast - either by enemies from the small southern island or those standing on the western beach (M9,9). We recommend securing the western shore first. There are 3 enemies stationing there (the picture above). You can eliminate them easily using Showdown Mode - order Isabelle to use the Connection and Cooper to throw his knife at the same time. Eliminating these enemies not only helps you secure the area around the cabin with McCoy kept inside but also makes it easier to reach the central area of the map (you will do this later). 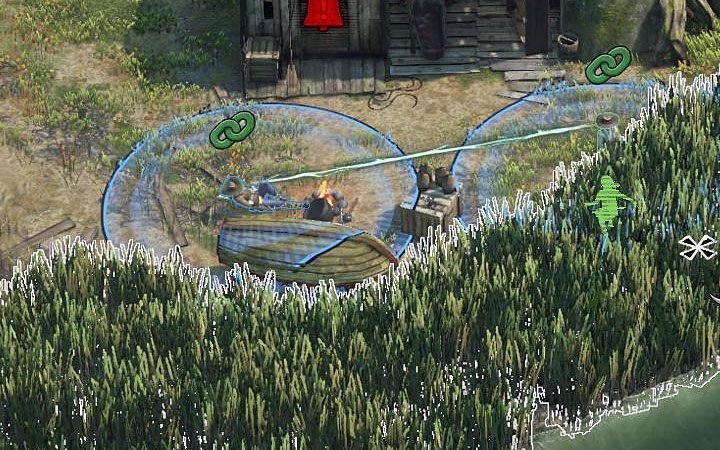 You can eliminate the enemies near the cabin in any order. We, however, recommend getting rid of several enemies from the southern area first(M9,8). That terrain is covered with tall grass which means that you will be able to hide bodies. Use Cooper's coin to distract those enemies who can spot you during an attack. This is especially important in the case of the bandits from the southern island. 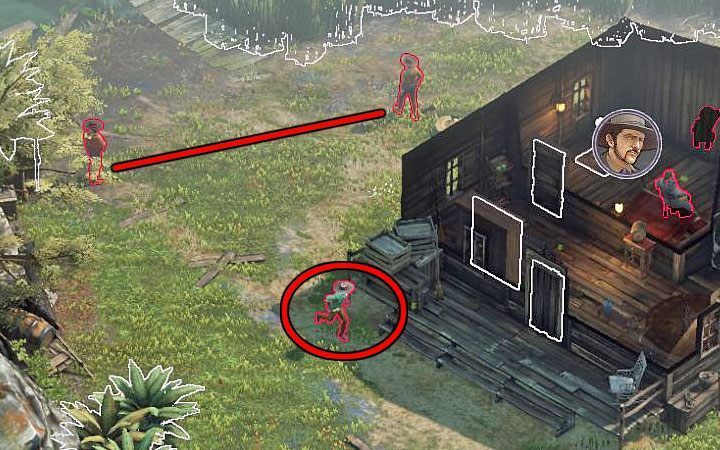 You must eliminate the enemy in green shirt marked in the picture above. He stops at two places - north of the cabin (M9,7) and inside one of its rooms. The best way to deal with the enemies is to use the Connection on the other two bandits when the enemy in green shirt starts moving towards the cabin. Once the two enemies are dead, hide their bodies in the bushes/tall grass. Killing the remaining enemy shouldn't be a problem. 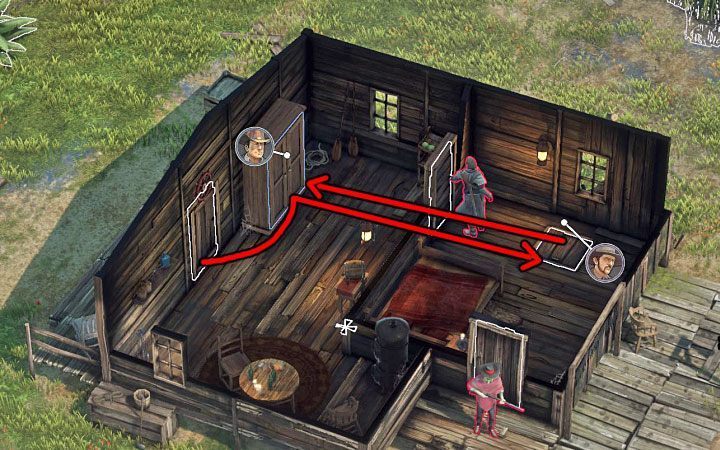 The best way to enter the building (M9,2) is to use the western door - the southern entrance is guarded by two bandits. Long Coat, an "elite" enemy, is inside the building. If you have already rescued Hector (which is very unlikely), he will be able to eliminate this opponent. Otherwise, your only option is to avoid the Long Coat alltogether.

Hide in the wardrobe marked in the picture (you can control any of the characters) and wait for the save moment to sneak up to the basement's entrance. Click on it to go down. McCoy joins the team - you get immediate access to all his skills. Go back using the same path and then wait for the opportunity to sneak behind Long Coat's back. If you have to, use the wardrobe to hide.