Areas where you rescue other playable characters

This page of the world atlas for Desperados 3 has a detailed map of mission 9 - Louisiana Voodoo. Among the things you can find on our map are places where the main heroes are either defending themselves or are held hostage. Of course, we have also marked other important locations (e.g. sniper positions). Our guide also has information about alle the challenges (Badges) of mission 9 - they are related to e.g. not getting into the water or avoiding using Isabelle's powerful ability.

A full description of mission 9 can be found on the following four pages of this chapter. Our guide also contains links and references to the map. For example, a marking (M9,5) indicates that you should find the blue point with number 5 on mission map 9.

Mission 9: Markings on the map

Mission 9 (Louisiana Voodoo) takes place in a fishermen village overrun by bandits. During it, you will meet up with Isabelle - this voodoo shaman has a few interesting "powers". Isabelle can e.g. control minds of the enemies to, for example, get to unreachable places. This ability has a very limited use meaning that you can't mind control every enemy.

Your primary objective is to save 4 heroes. They are located in various parts of the map. You can't control them until they are save. The suggested way of saving the heroes is Cooper > McCoy > Kate > Hector. We have followed this order in our guide. You don't have to stick with this order, you can come up with a different solution to e.g. complete one of the challenges (rescuing Kate or Hector first). Each rescued hero is a great help because you will be able to use their skills.

You can (and even should) swim a lot in this mission. Sadly, this ability isn't available to all the heroes. The only people who can swim are Cooper and Isabelle. As for the other 3 characters, you have to stick to the land.

Mission 9 has a total of 8 Badges. All of them are described below. Challenges are initially hidden, although you can deal with them during the first playthrough.

You can't complete challenges if you play on Beginner. You have to play at least on normal. The same goes for replaying missions to get the remaining challenges. 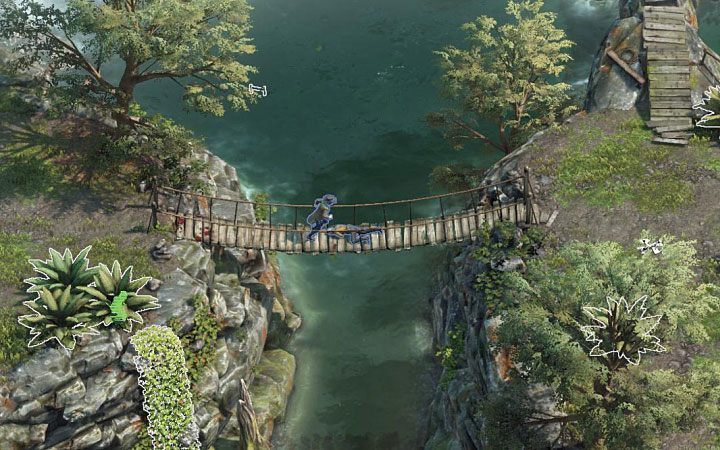 We recommend doing this difficult challenge during your second playthrough of this mission, on the easy difficulty. The inability to enter the water limits the "creativity" in avoiding and eliminating enemies. You have to be aware of a greater risk of getting detected and raising the alarm. The most difficult places are: 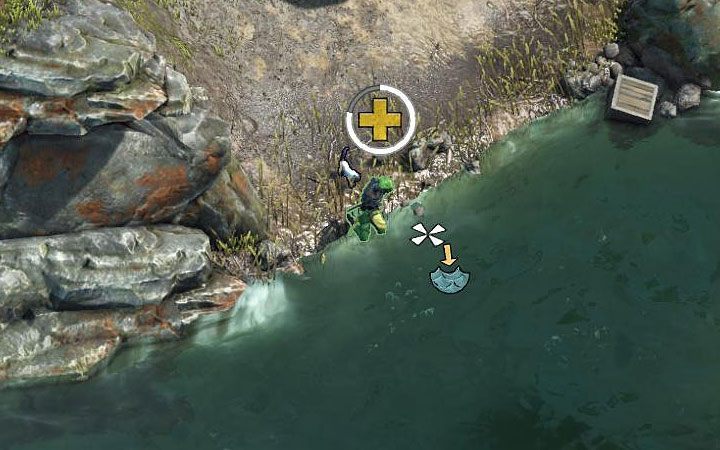 Don't try to get this challenge during your initial playthrough. Rescuing Kate or Hector first is much more difficult. If you don't do this challenge, we recommend saving Cooper and McCoy first.

Kate is definitely easier to rescue. You can do that after reaching the vantage point (M9,3) - after you unlock the entire map. From now on, you can order Isabelle to get into the water. 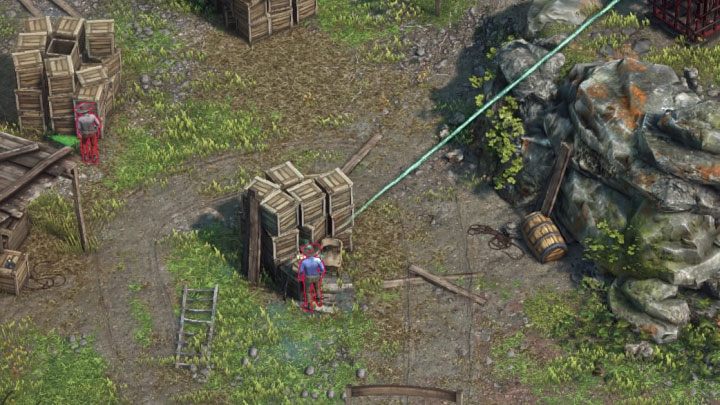 Swim towards Kate's cage (M9,2). To make things easier, we recommend using the mind control twice - to order the controlled enemy to give Isabelle the key (M9,15) (this location is shown on the picture above) and the second time to get rid of the nearby sniper (M9,12). You will kill that enemy with McCoy's weapon. 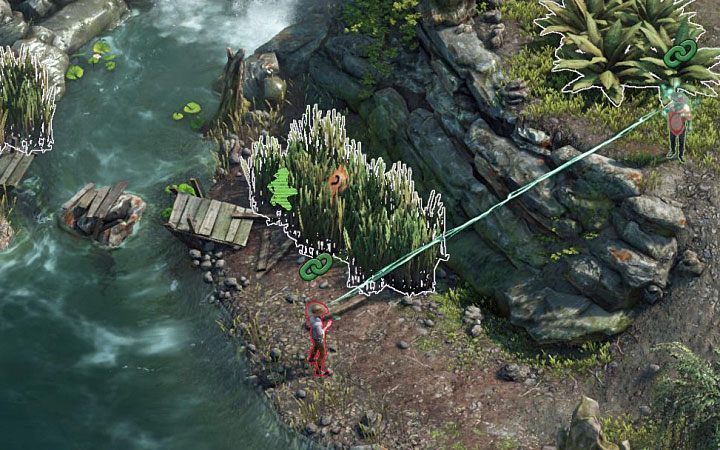 Connect ability allows you to "connect souls" of two enemies standing close to each other. From now on, stunning or killing enemy 1 will stun or kill enemy 2.

The inability to use this skill will cause you problems with eliminating opponents - this is especially problematic in the initial phase of the mission when Isabelle is acting alone. Play on easy, try to avoid as many enemies as possible, focus on using melee attacks and distract enemies with Isabelle's cat.

This is a hard challenge to complete due to the size of the map, number of objectives and how easy it is to raise the alarm by e.g. attacking an enemy who is in the field of view of another. Try to get this challenge after having multiple playthroughs of this mission. Also, remember to play on easy. Refrain form attacking enemies if you don't absolutely have to kill them. If you raise the alarm, run away to a save place. You can also activate Showdown Mode to stop the time and plan your next move.

Kill 5 guards at the same time

Wait with this challenge until you rescue all the heroes - you will control a 5-person team. Use Showdown Mode to order each of the heroes to kill an enemy - the best targets are those enemies who stand in place. Get as close to them as possible. Once you have selected the targets, press the button to execute the orders (ENTER key on PC).

Another idea to get that badge is to use Hector's sawed-off shotgun after you release him from the cage. Hector's weapon is capable of killing several opponents with a single use. If you find an easy-to-attack group of opponents, you won't have to use all 5 Heroes.

Kill 3 guards with an environmental kill 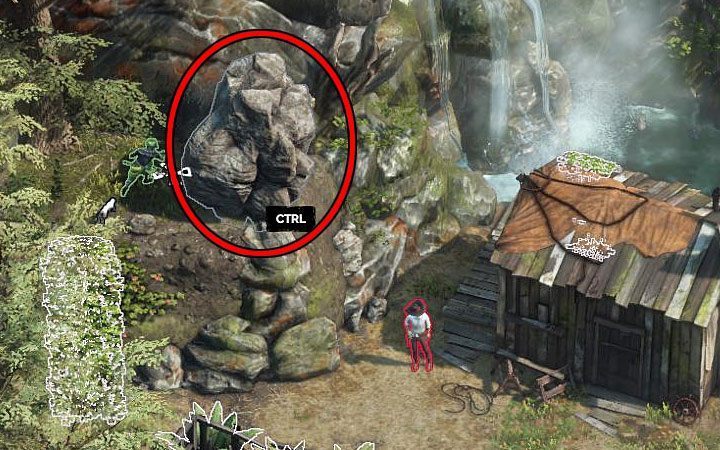 Among the things that can help you complete this challenge is the rock in the fishermen village in the north-east part of the map (M9,4). You can stun one enemy after another, drag their bodies and leave them near the rock. Once you have at least 3 unconscious enemies in one place, climb up the higher ledge and push the rock down on them. 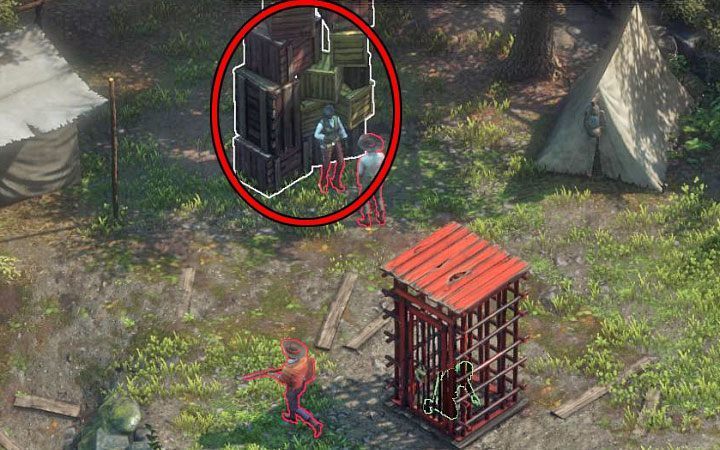 This is the best choice for your first playthrough of this mission. However, be aware that you will repeat some of the parts several times. This is because many enemies are observing each other and/or patrol the map. Luckily, this challenge doesn't have a time limit, and you can save your progress.

Be sure to play on easy to reach team members faster. Make the best use of Isabelle's "voodoo powers" and the abilities of other heroes. Don't waste the time on killing enemies who aren't part of any of the mission objectives. We also advise you to frequently save your game and load an older save if you waste too much time in some locations.