This page of the guide to Desperados 3 has a complete walkthrough for mission 1 - On The Hunt. This isn't a very long stage. The entire mission is about following your father - James Cooper. Young John must follow all orders given by his father. Along the way, you will learn all the basic elements of the gameplay - learn the controls, how to avoid detection and how to activate skills.

Our walkthrough for mission 1 refers to the map in the world atlas, which can be found on the first page of this chapter. For example, the designation (M1,5) indicates that you should look at the point with the number 5 on the map for mission 1. 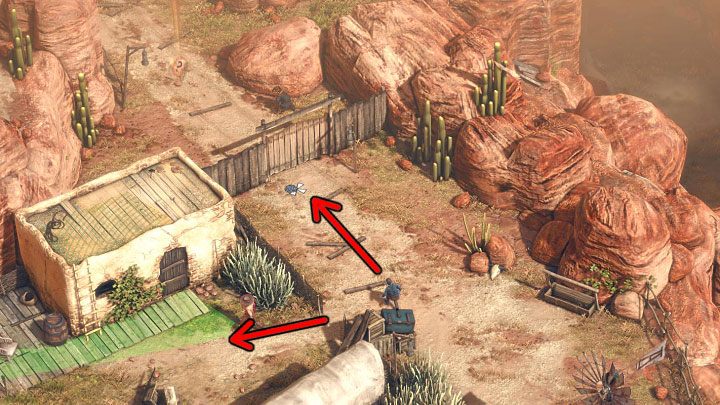 You start in the southern part of the map (M1,1) and must follow your father north. On the way, crouch to start sneaking (press SPACE if you have the PC version). Get to the wagon (M1,2), where you will find the first note with the question mark. You can pick up objects of this type (if you play on PC, press CTRL and click on the object) to see a new tutorial page.

You can hover the cursor over a single opponent to display their field of view (right-click on PC). Get around this gunslinger because you don't have any weapons or gadgets. Wait for the opponent to go to the left (that is to a small house) and start making your way to the gate. Open it to move on. 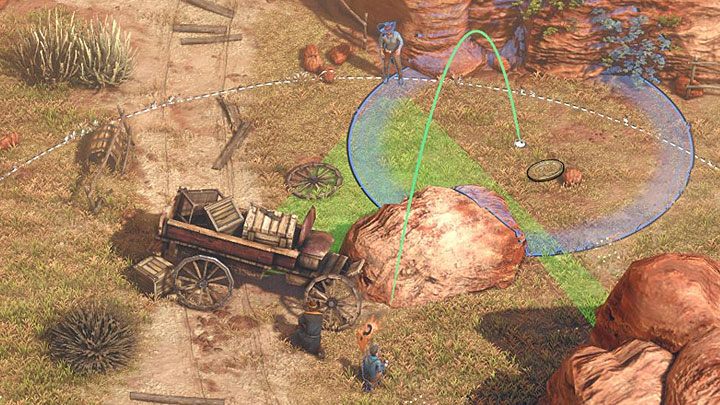 Get to the destroyed wagon (M1,3) to get another tutorial page. You will get a Fake Coin - this is your only gadget in this mission and its advantage is that it has an unlimited use.

Your task is to distract the attention of the enemy nearby. Select the coin from the inventory (press D on PC). The coin must land within the enemy's hearing range - the picture shows an example where the coin should land. Once the guard is confused, James will automatically deal with him. 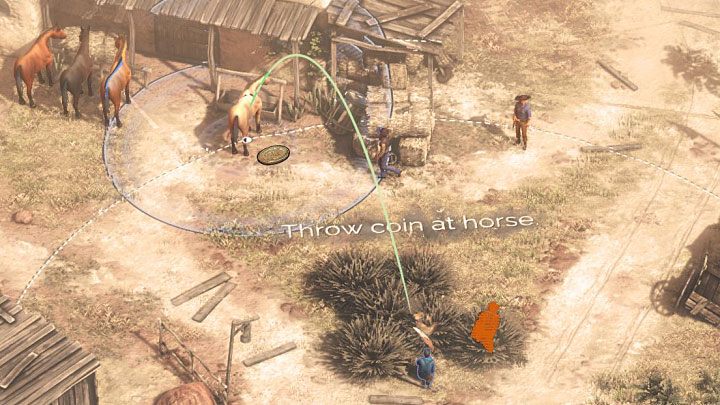 The main path leads to the stable (M1,4) - the game will show you a tutorial for the Showdown Mode. It allows you to plan actions and then perform them by pressing a single key. On all difficulty levels except the highest Desperado, activating Showdown Mode (SHIFT key on PC) stops the time temporarily. 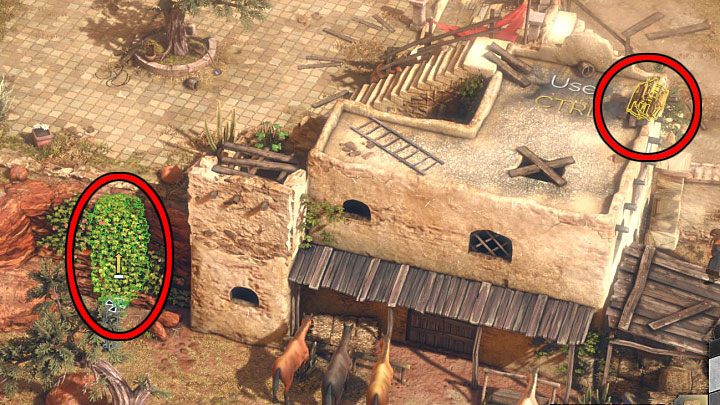 The nearby gate is closed - you must help James by lowering the rope ladder (M1,5). Go left and climb the ivy to reach the roof below. Then climb to the upper roof and interact with the rope ladder to lower it. Now you can go together to the next part of the map. 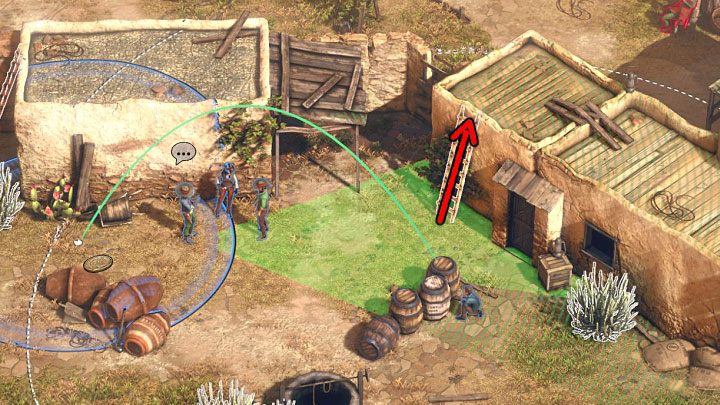 Make sure you are in stealth mode so that you won't be seen by any of the enemies standing further away (M1,6), and especially by a woman looking south. Your task is to distract the enemies so you can use the stairs on the right leading to the rooftop.

Get to the place shown in the picture above and toss a coin to make the enemies turn left. This should give you enough time to get to the roof safely. A revolver duel is about to happen nearby (M1,7), but this event doesn't affect the progress of the described mission. You can ignore this scene and go straight to the southeast. 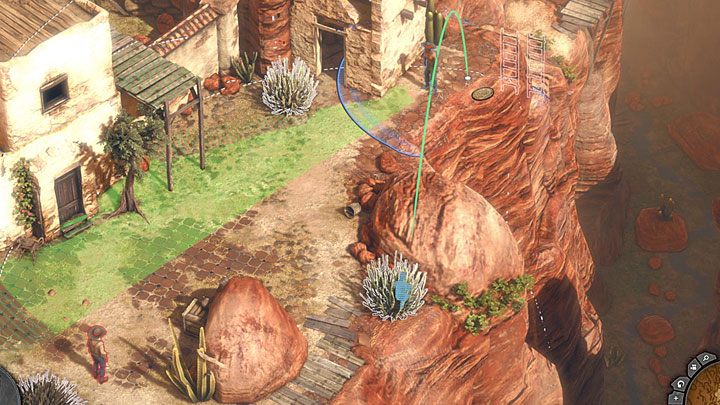 Your next objective is to distract the enemy standing at the cliff (M1,8) - the bandit located to the north. You must get behind the southern enemy and, while crouching, move along the edge of the cliff. Hide in small bushes and throw a coin.

James orders you to tie the stunned opponent - you must do this before all the stars above his head disappear. When you get to the body, press the interaction key (CTRL on PC) to make sure that the bandit won't free himself up. That's not all - pick up the unconscious bandit and move his body into the bushes. This part of the tutorial is especially important - be sure to hide the enemy bodies (killed and stunned) in the later sections of the game. This will reduce the risk of a sudden alarm. 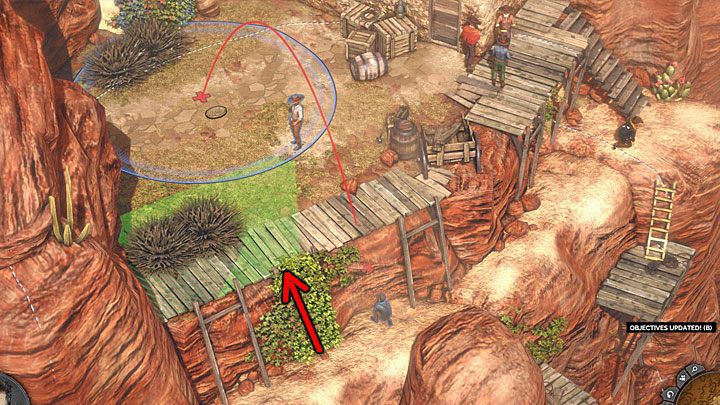 You now have to walk along the edge of the cliff (M1,9). You won't encounter any enemies, and you don't need to be afraid of falling into the abyss. This is a great opportunity to familiarize yourself with the ability to rotate the camera (if you play on PC, hold down the ALT key) to see hidden objects, characters, and shelves.

You are near enemies - start sneaking. Go to the single gunslinger (M1,10). Throw a coin to distract him, and only then climb the ivy. 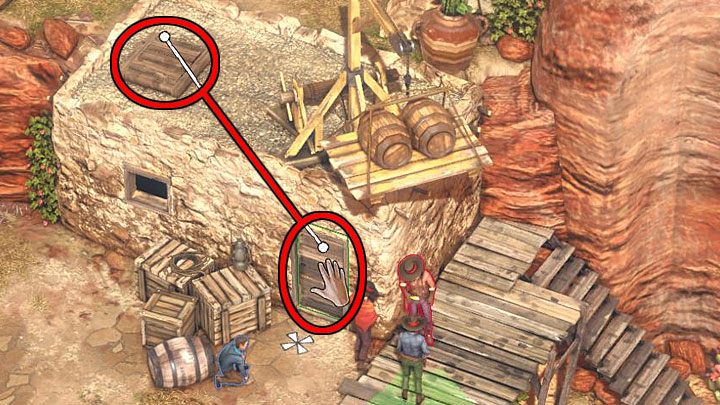 Turn right and head towards the group of enemies (M1,11). You must sneak to the lower doors of the hut marked in the picture - you can do this without using a coin.

Enter the building and use the hatch on the roof. Go to the crane. Interact with it to drop a heavy cargo on the opponents. You now need to get to the statue (M1,12) (on the way, you can optionally check the last note with a question mark) to trigger the cut-scene ending this mission.