The unofficial guide to Darksiders II contains a thorough walkthrough which will take you through the events of the entire game. It includes detailed tips on the exploration of all available locations, means to successfully eliminate enemies encountered on the way, techniques on how to defeat the biggest bosses, and step by step solutions to the often difficult logic puzzles. The walkthrough also has information on how to acquire valuable items and secrets, as well as on side quests available at a given moment.

The guide contains the following indicators: 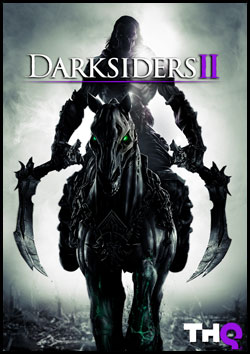 Follow the exploits of Death, horseman of the Apocalypse, in a tale that runs parallel to the events in the original Darksiders game. This epic journey propels Death through the light and dark realms as he strives to redeem his brother War, blamed for inciting Armageddon and the eradication of Mankind...

Though the world has been cleansed of life, there are many souls that remain between the realms of Heaven and Hell. In his travels, Death will be joined by long-time companions, and will cross paths with ancient friends and foes alike. Interacting with those you meet on your journey will hold the key to unearthing the secrets behind an insidious plot for Creation itself.

Death will need to rely on more than just guile and determination as he traverses the Underworld. Thousands of powerful weapons, armor, and amulets can be found and equipped to transform your Death into a heavy-hitting juggernaut, a deadly blur of speed, or terrifying magic user. Complete quests, slay enemies, and ransack treasure chests to discover new additions to your armory. Because loot is randomly generated, theres no telling what the next kill will bring.

Before time was born, a bright kingdom was created for the Angels, a dark realm for the Demons, and a world for Mankind. The Charred Council forged a truce between the warring legions of Heaven and Hell to stay the Final Battle until the End of Days, when the Kingdom of Man would be prepared to cast its lot in the eternal conflict. But War, Rider of the Apocalypse, destroyed the Earth before its appointed hour. Or so it was claimed. To spare his brother from oblivion, the second horseman rode forth, and his name was Death

Darksiders 2 Game Guide is also available in our Mobile App This site is not associated with and/or endorsed by the THQ Inc. or Vigil Games. All logos and images are copyrighted by their respective owners.