On this page of the guide to Genshin Impact, you will learn all about Barbara, the character with the Hydro element - what she is best suited for, how to build her best, and in which team she will have the greatest potential to perform her role. 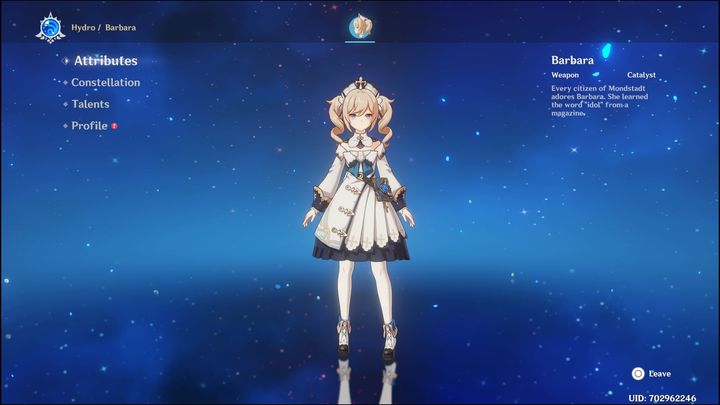 Barbara is a four-star character with the Hydro element. She fights using a Catalyst. Barbara is a very good Hydro healer, so if you need someone with a Hydro element, you might want to consider adding her to the party.

You should focus mostly on stats that increase Barbara's HP, since her healing scales with maximum HP.

After using Elemental Skill, Barbara's basic attacks will heal all party members. Charged Attacks, in turn, increase this bonus fourfold. Therefore, it is worth thinking about two sets of artifacts that will further strengthen the effectiveness of this character's healing.

The first set worth picking out for Barbara will be 4x Maiden Beloved. It boosts healing efficiency by 15%, and using Elemental Skill or Elemental Burst will do 20% more healing for 10 seconds for your party members.

The second set of artifacts is 4x Ocean-Hued Clam. By equipping this set, you will receive a 15% Healing Bonus. But the skill you get for equipping all four pieces is more important. After healing allies, you create Sea-Dyed Foam, which for 3 seconds will accumulate the amount of recovered HP by healing. At the end of the duration of this effect, Sea-Dyed Foam will explode, causing 90% DMG from accumulated healing. Since Barbara can recover a lot of health in a short time using Elemental Burst or Charged Attacks, the explosion can deal a lot of damage to enemies. 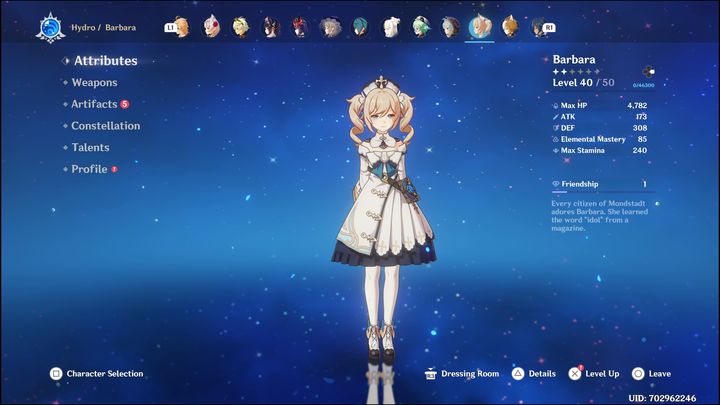 There are two weapons worth recommending that increase HP. The first of them will be a four-star weapon Prototype Amber. After using Elemental Burst, it regenerates 4 Energy every 2 seconds. What's more, all party members will regenerate 4% of their HP every 2 seconds. This effect lasts 6 seconds.

The second weapon is very easy to get and to improve to its maximum Refinement level - a three-star called Thrilling Tales of Dragon Slayers. The weapon increases HP and has a skill that causes the next character who appears on the battlefield to have their ATK increased by 24% (max 48%) for 10 seconds. Cooldown of this skill is 20 seconds. Therefore, it is worth switching to Barbara, heal, and then choose your DPS to increase his/her damage.

Talents are abilities that each character in the game uses. In the case of Barbara, you should develop her Talents in the right order:

Barbara is a very good healer who can perform her role well even at C0. However, if you want to focus on improving this character, you should get C4 and C6. C4 will give you extra Energy for using Charged Attack. As for C6, if a character on the battlefield dies and Barbara is not on the battlefield, she will resurrect that character, restoring 100% of their HP. This effect may occur once every 15 minutes.