On this page of the game guide to Genshin Impact, you will learn all about Sarah, a character with an electro element, therefore, what it is best suited for, how best to build it, and in which team it will have the greatest potential to perform its role. 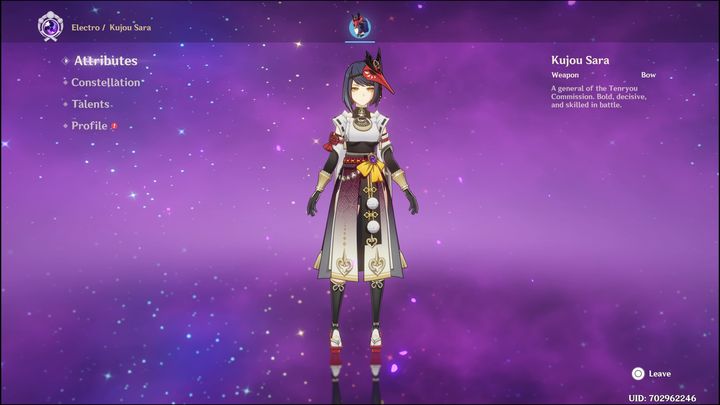 Sara is a four-star character who fights using a bow. Sara is perfect for supporting your team, so one of the best builds for her will be the electro support build. You should focus on getting about 160% -170% Energy recharge to use Elemental burst as soon as possible.

Sara should focus on using loaded attacks as often as possible, Elemental skill, and Elemental Burst. To do so, you should use the following suggestions for artifacts and weapons:

Artifact set 4x Emblem of Severed Fate as well as4x Noblesse Oblige will be the best choice for Sarah. The first set offers increased Energy recharge by 20% and increases Elemental Burst Damage to a maximum of 75%, this is dependent on your Energy Recharge.

However, the second set of artifacts increases Elemental Burst Damage by 20%, and using Elemental burst will strengthen Attack by 20% for each member of your party. 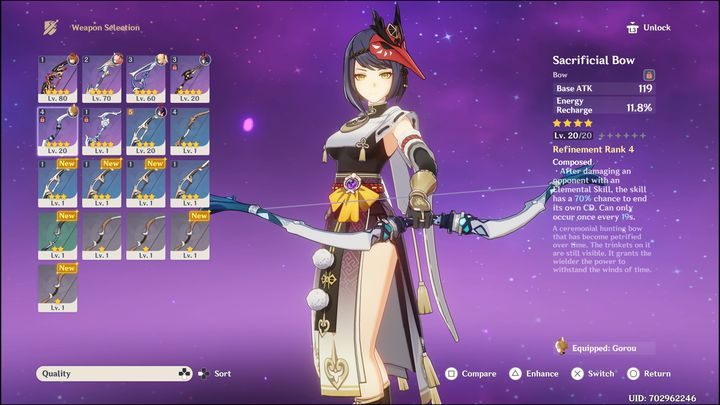 Moving on to weapons, these are two recommended bows. The first one is Skyward Harp. It is a five-star weapon that, in addition to the base Attack and Critical rate, also increases your Critical Damage by 20%. Hitting an opponent has a 60% chance of producing a small Area of Effect attack, dealing 125% Attack Damage. This effect may occur every 4 seconds.

The second weapon, Sacrificial Bow, is suitable perfectly for Sarah because the substrate offers additional Energy Recharge. Moreover, after using the elemental skill and injuring an opponent with it, you will have a 40% chance that the Elemental Skill's renewal time will reset, so you will be able to use the elemental skill again.

Talents are abilities used by every character in the game. In Sarah's case, you should focus on improving your skills in the right order:

You don't have to improve her Normal Attack, as she will mainly deal damage with her Elemental Skill and Elemental Burst.

Sara will make a big contribution to your team as early as C0, however, the best constellation for her will be C6, which will perfectly fulfill her supporting role in the team, as it offers 60% of the increased Critical Damage for team members who received a buffer to Attack using Tengu Juurai. Critical Damage is increased only for the Electro Damage itself, so if you have a C6 on Sarah, it is worth having at least one DPS, or sub DPS, that deals electro Damage.