On this page of the guide to Genshin Impact, you will learn all about Fischl, the character with the Electro element - what she is best suited for, how to build her best, and in which team she will have the greatest potential to perform her role. 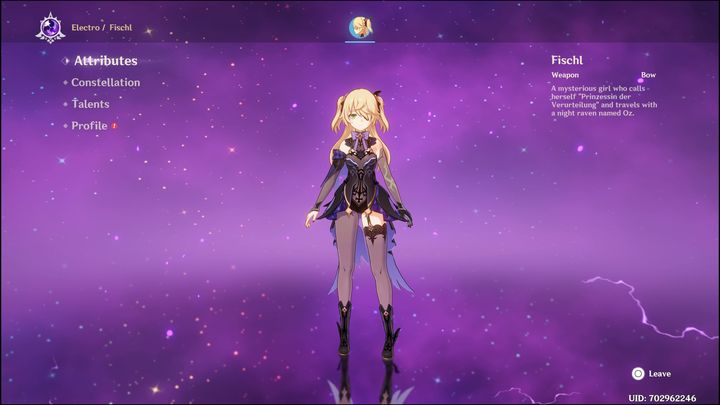 Fischl is a four-star Electro who fights with a bow. There are many possible builds for Fischl - you can build her as a Main or Sub DPS and even Support.

Fischl as a DPS is ideal for build that focuses on dealing physical damage, mainly with quick, basic attacks.

The best artifacts for Fischl as a Physical DPS are those that increase this type of damage. Therefore, it is worth focusing on improving the three types of artifacts: Bloodstained Chivalry, Pale Flame and Gladiator's Finale. The first two types of artifacts increase physical ATK by 25% (2 parts), while Gladiator's Finale increases ATK by 18%. It does not really matter which combinations you choose, it is important to have a lot of ATK%, Physical DMG, CRIT Rate and CRIT DMG for the main and side statistics.

When thinking about weapons for Fischl, the best choice will be a five-star weapon, Skyward Harp. This weapon, in addition to the base ATK and increased CRIT Rate, has a skill that increases CRIT DMG by 20%. Shots have a 60% chance that they will create a small AOE attack, which will inflict 125% Physical DMG. This effect occurs once every 4 seconds. This weapon works perfectly with the build focused on Physical DMG, as it has a good interaction with it.

The second weapon, much easier to access, will be Compound Bow. Along with the base ATK, the weapon adds a Physical DMG bonus. The weapon's ability increases SPD ATK by 1.2% and ATK by 4% for 6 seconds if you attack with Normal or Charged Attack. Maximum 4 stacks.

The third weapon is Rust. In addition to the base ATK and ATK%, this weapon boosts your basic attacks by 40% and reduces Charged Attack damage by 10%. Fischl should not use Charged Attacks, so you will not feel the debuff at all. However, the increased damage of normal attacks by 40% is a lot. As for a four-star weapon, it will be the perfect choice if you do not have Skyward Harp.

If you have a different Main DPS in your party, you should still consider adding Fischl as a Sub DPS, who will support you mainly with Elemental Skill and Elemental Burst by inflicting Electro to enemies.

When building Fischl as an Electro Sub DPS, it is worth thinking about such statistics as ATK or Electro DMG. This is what the set of 2x Gladiator's Finale and 2x Thundering Fury artifacts offers. The first set increases ATK by 18%, and the second grants Electro DMG Bonus by 15%. Since Fischl scales well with these two stats, this will be a great choice. 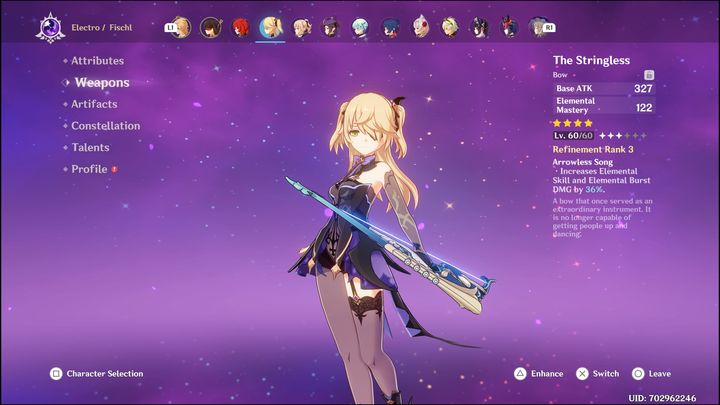 As for weapons, there are two worth mentioning. Interestingly, both of these weapons are four-star, so you shouldn't have that much trouble getting them from Wishes. The first is The Stringless. In addition to ATK, it also strengthens Elemental Mastery, which is very important for Fischl as a Sub DPS. The ability of this weapon increases Elemental Skill DMG and Elemental Burst DMG by 24%.

The second weapon is Alley Hunter. This bow, in addition to the base ATK and ATK%, has an interesting ability. The character who uses this bow, but is not present on the battlefield (must be in the party), increases DMG of other characters by 2% every second, up to a maximum of 20%. If a character with this bow stays on the battlefield longer than 4 seconds, they will start to lose stacks. Fischl with this build is supposed to use Elemental Skill or Elemental Burst and then switch with another character, strengthening DMG of other party members.

Talents are abilities that each character in the game uses. As for Fischl, depending on your preferred play style, you should focus on improving your skills in the right order:

Fischl is a great choice if you don't have any Constellation on her, but she gains a lot with each level. Regular C1 gives a lot, because when Oz, a raven that supports with Elemental Skill and Elemental Burst, is not on the battlefield, increases the DMG from basic attacks - with each attack, Fischl causes Oz to fire a projectile that deals 22% of Fischl's ATK.

Other constellations also significantly increase Fischl's potential, so the higher the C level, the better.