This page of the Horizon 2 Forbidden West game guide contains a walkthrough of the Faro's Tomb main quest. Our walkthrough explains, among other things, where to find Alva, how to reach Legacy's Landfall, how to defeat the Apex Thunderjaw boss, how to enter Thebes, where to find the Omega Access Console, how to defeat the Corruptors and how to escape Thebes at the end of the quest. 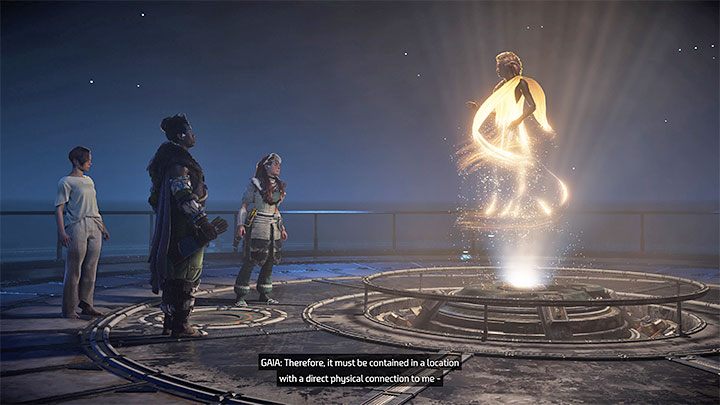 This quest will be unlocked after completing several quests from the previous pages of the guide. These consist of the following main quests:

At the Base, you'll see a cut-scene featuring Aloy, GAIA, Varl, and Beta. You will be tasked with locating the eponymous tomb in order to gain Omega clearance. 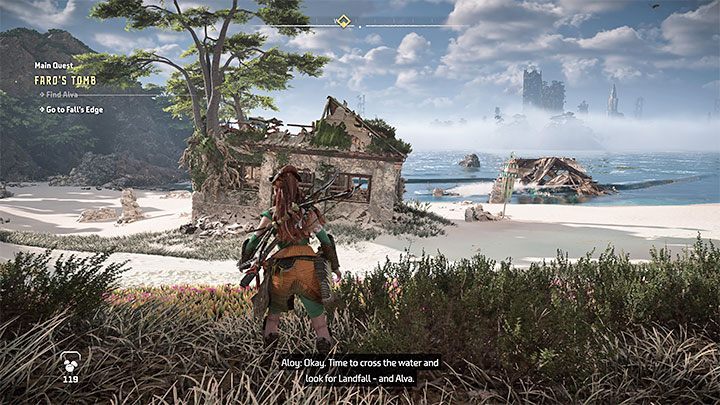 After Aloy is contacted by Kotallo, you will receive a suggestion to rearm in Razor's Edge, but this is completely optional. A boss battle awaits you in the near future, but the game will let you prepare for it in the newly unlocked settlement.

You can immediately head towards the southwest marker, which is the one associated with finding Alva. It will be a small hut - a Quen outpost on the coast. 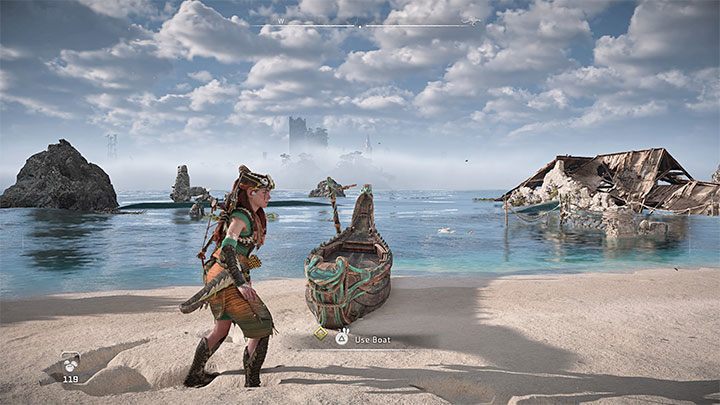 Aloy will find no one inside the cottage or in its vicinity. You need to check out the boat on the beach. Interacting with it will begin the journey to Landfall, i.e. to the ruins of San Francisco located at the western end of the world map.

The journey to San Francisco is not a one-way trip. In the new section of the world map, you will find a settlement with friendly NPCs and several campfires. This will allow you to freely return to areas east of the Landfall. 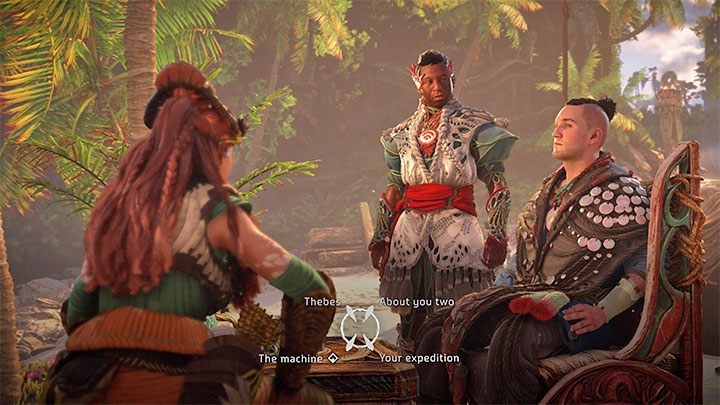 Legacy's Landfall is the name given to the Quen settlement located within the San Francisco ruins. As you travel to this location, eliminate or avoid the Watchers, which are the most common type of enemy you will encounter here.

When you reach the camp, a cut-scene will picture you meeting the camp's occupants - Bohai and Ceo. During the conversation, you will get the chance to ask additional questions. Chiefly, you need to discuss the machine blocking access to the digsite and Thebes. 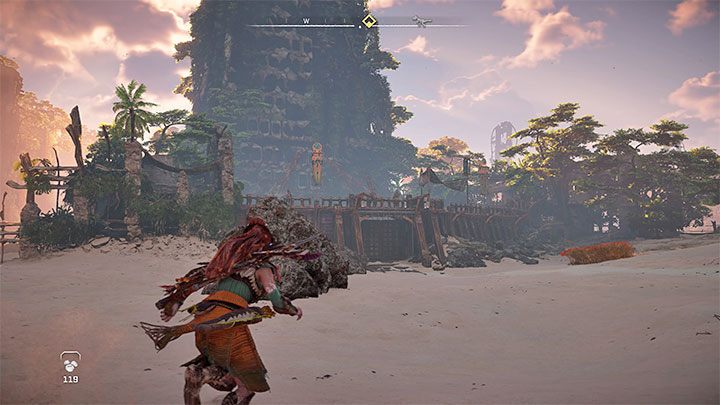 The entrance to the digsite is a short distance northwest of Legacy's Landfall. Due to the upcoming boss fight, you should use the services of the NPCs in the camp before you proceed.

When you reach the large gate of the digsite, a boss will appear - an Apex Thunderjaw. 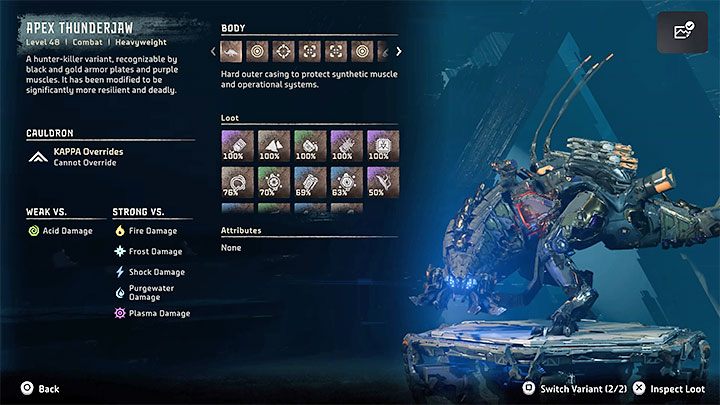 At the start of the Thunderjaw boss fight, you should scan it. This is mainly to establish that you are facing a strong Apex variant of Thunderjaw that is at level 48. Thankfully, the Thunderjaw has already been partially weakened by the time you arrive and it will "only" have half of its health points.

The Thunderjaw's only weakness is the acid element - if possible, try to use this ammo type against it. You can also quickly place acid traps around the area, especially if you have unlocked their stronger versions. Don't forget to go through the machine catalogue to find out, among other things, where the components necessary for the boss to use different types of attacks are located. 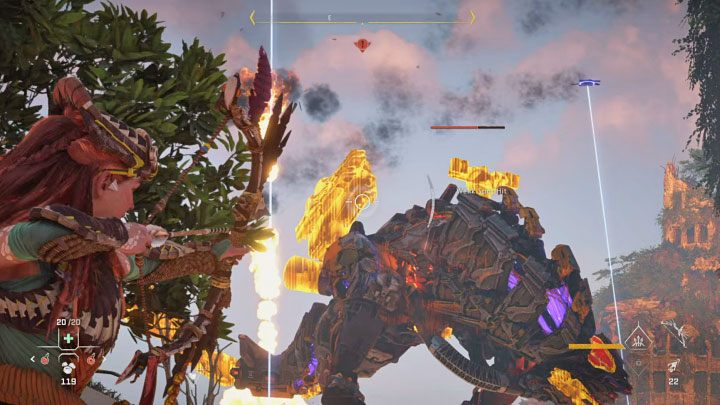 We recommend keeping a safe distance from the Thunderjaw throughout the battle, although remember that this elite machine can also launch effective ranged attacks.

You should prioritize destroying the cannons on the Thunderjaw's back to prevent it from using some of its ranged attacks. Use a weapon that deals a lot of damage or one that specializes in detaching components from machines. 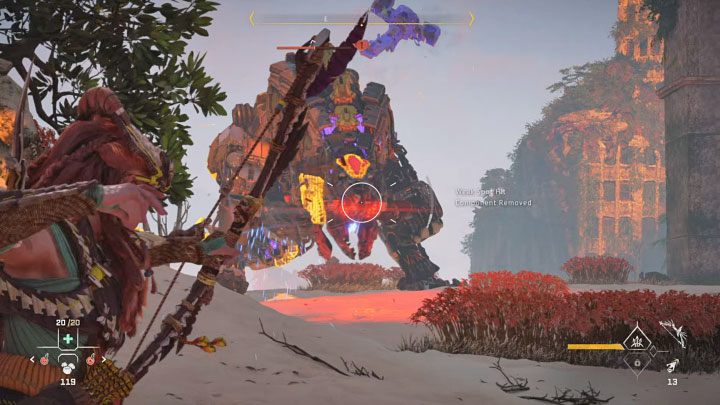 Next, focus on hitting the weak points surrounding the machine's mouth, which will not only detach more of its components (e.g. the cannon that is continuously firing at you), but you will also weaken it more effectively. 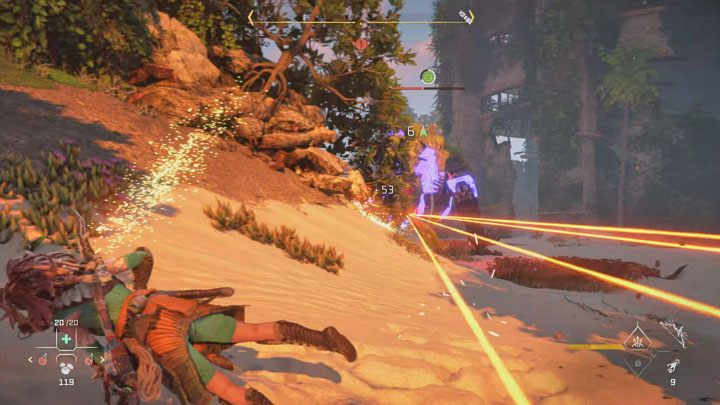 React to Thunderjaw's attempts to charge or strike you with its tails - dodge and quickly run away to some other section of the arena to create some distance between you again. You can and should also use the ruins as cover. Positioning yourself next to them can make it even harder for the Thunderjaw to get close to Aloy, giving you more time to comfortably attack the boss from a distance.

After you defeat the Thunderjaw, don't forget to examine it and search the area for its detached parts to obtain a lot of valuable loot. 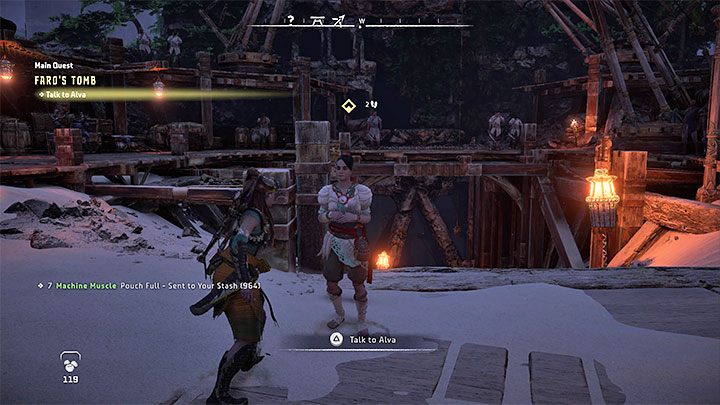 After winning the battle, once again reach the digsite. You will be allowed inside. A conversation with Alva will begin, with Ceo eventually appearing and accompanying the characters on a quest to explore Thebes. A cut-scene will show you arriving at the locked entrance and Aloy will have to unlock it from the other side.

Find an entrance to Thebes 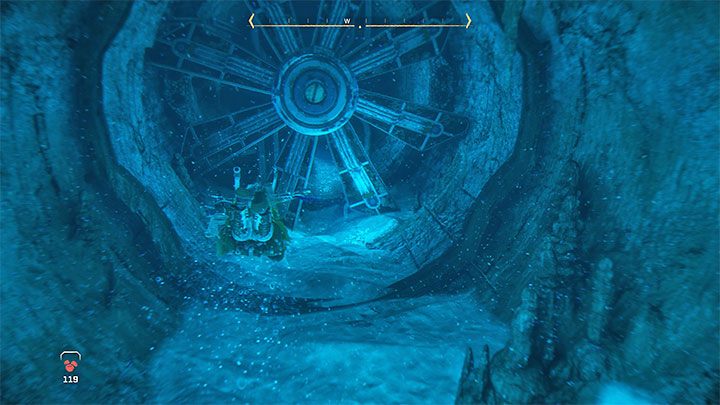 You need to jump into the water next to the locked gate and dive underwater to start exploring the vast flooded part of Thebes. Keep an eye on the location of the first large turbine. It turns on at regular intervals. Wait until the turbine stops moving and quickly swim between its blades (you can optionally press Circle to launch yourself forward). 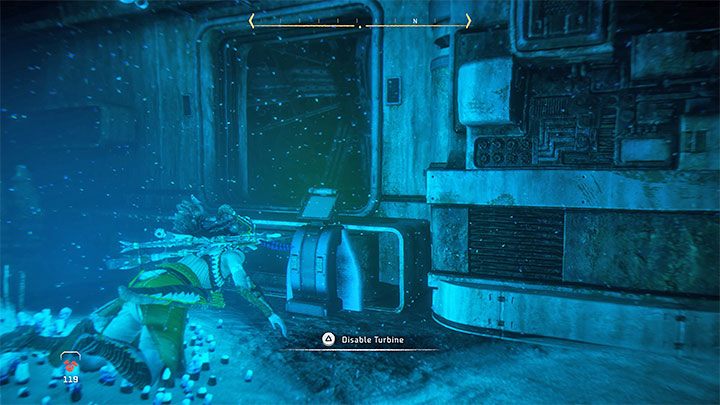 Float into the side room to the left. Inside, you'll find a console that will stop the second large turbine. Return to the central tunnel, swim through the inactive turbine and this time, choose the passage to the right. Soon you will reach a place where Aloy can surface. 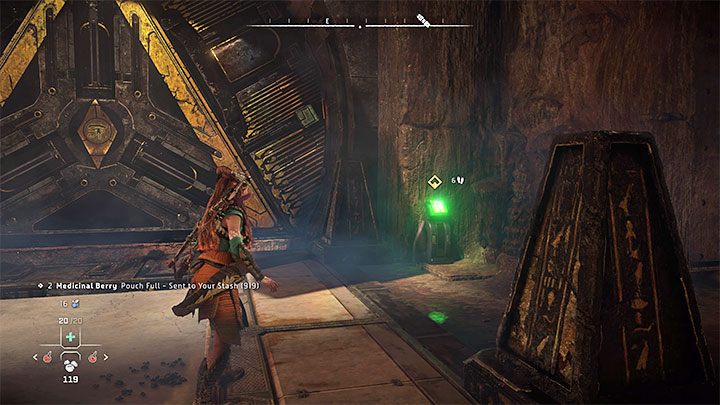 You can find loot and collectibles in the area (there is an abundance of these in Thebes), but in order to progress the quest, you'll have to reach a large locked gate from the other side. Open it with the console to its right and let the rest of the expedition members in.

Aloy will be forced to wear Sobeck's Raiment. This is a very rare female hunter outfit that is only required for the current expedition. It will remain in your inventory even after the quest is over (and you'll even have the option to upgrade it), but then using it will become optional. 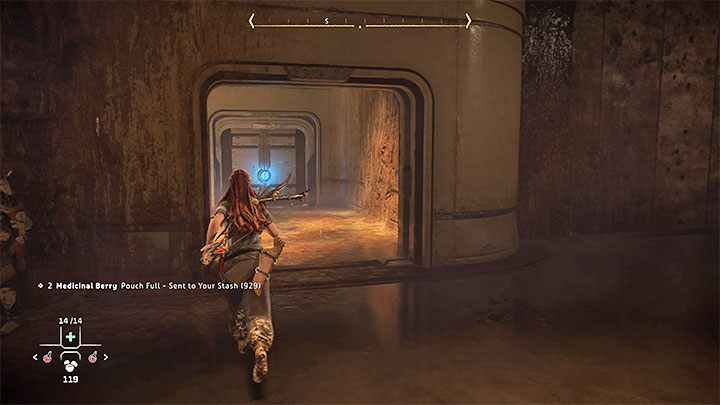 While crossing the chambers of Thebes, you can focus on following the main path (by finding more "blue" doors) or look around for loot and objects to scan along the way. The characters will soon reach a chamber where a fight will begin. 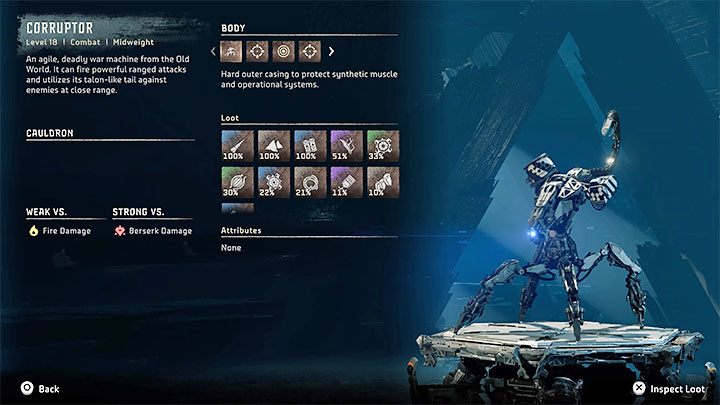 Corruptors are a new type of machine. They don't have a very high experience level, but they are capable of effective melee and especially ranged attacks. It's a good idea to scan one of the machines - this way, you'll learn that the Corruptors are weak to fire. 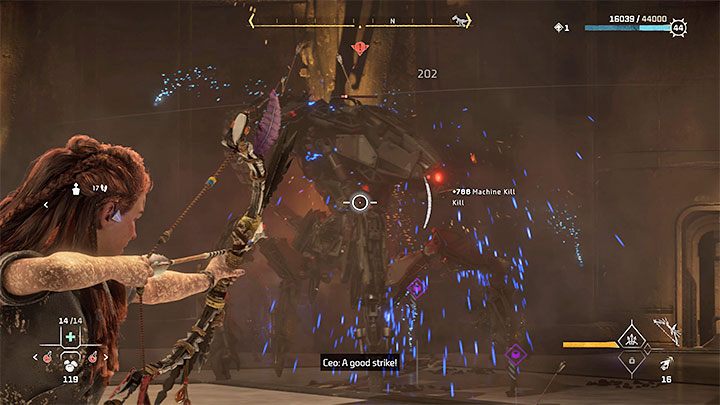 Based on this information, equip fire element ranged weapons and, optionally, quickly deploy fire traps in the area. Use the nearby statues as cover, although keep in mind that they might end up getting destroyed amidst battle. When possible, target the weak spots of the machines and attack them one at a time. 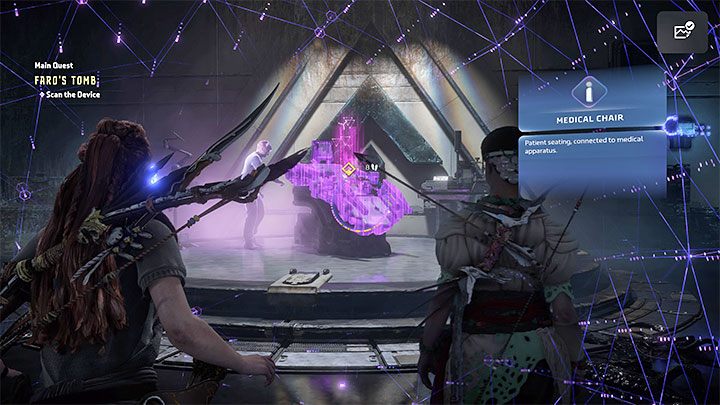 After the fight, head out towards the room's unexplored exit. The team should head towards the room with the larger device. Use focus mode to scan it - this will initiate a holo projection.

Search for a way past the locked door 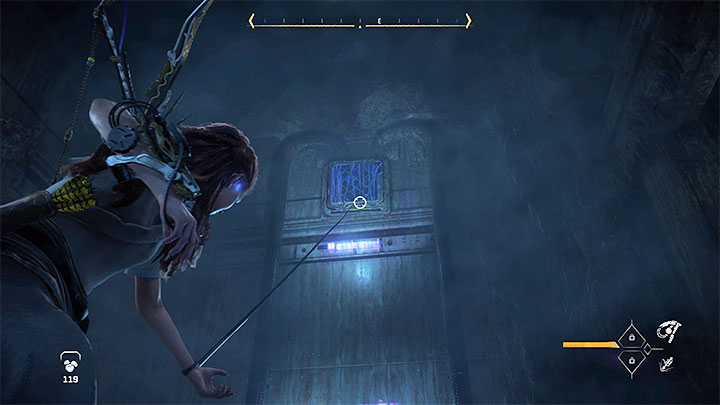 By exploring further, you will reach a locked door and Aloy must single-handedly find a way to bypass it. Check out the grid near the ceiling, which is pictured in the screenshot. Use the grappling hook to tear it out and jump to the entrance of the ventilation shaft.

After using the shaft, reach the console containing the Omega Clearance. A longer cut-scene will play and Ceo, along with his bodyguards, will turn on Aloy and Alva. 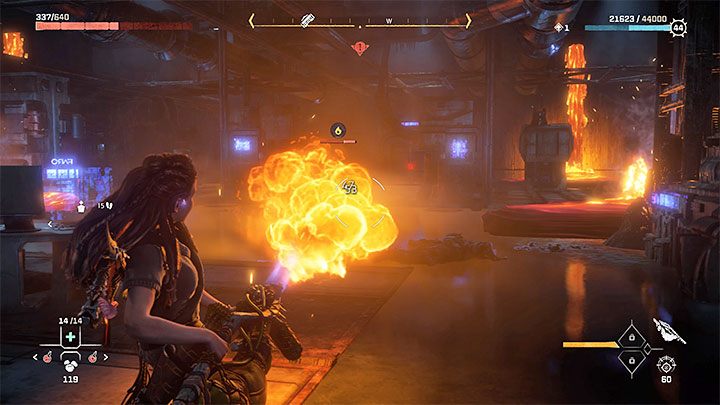 Once the battle begins, focus on the stronger opponents using heavy weapons - one of them uses a machine gun and the other has a flamethrower. Use the best possible ranged attacks to get rid of them efficiently, otherwise they can very easily damage Aloy's health.

You'll have more freedom with deciding how to eliminate the remaining two Burrowers. You can defeat them with your own ranged weapons or one of the heavy weapons you've picked up. However, keep in mind that the enemies in white armor are very agile, so relying on frequent dodging might be your best bet to stay alive. 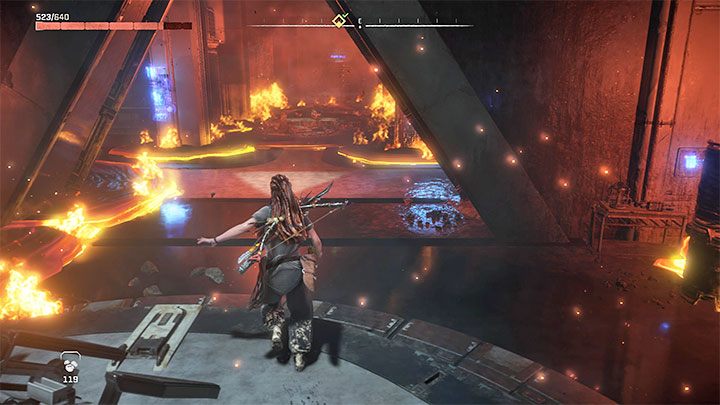 You'll need to escape the structure before it collapses. The escape route is very linear and you have to watch out for two things: 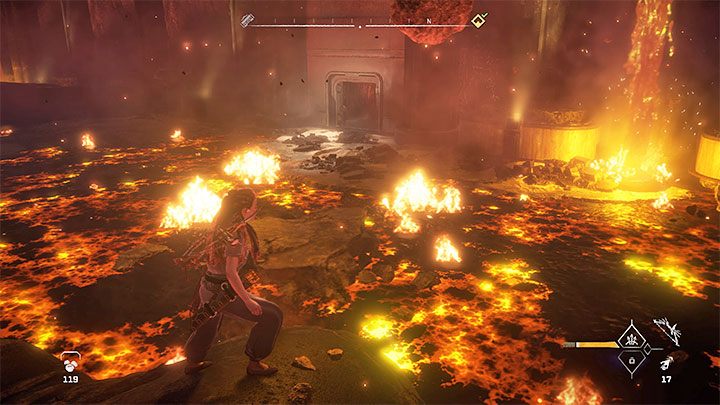 After watching the cut-scene with Ceo in the big hall, you have to jump to the ledges surrounded by lava, which are pictured above.

Continue your escape and keep an eye on the balconies, as the falling pieces of the ceiling will partially damage them and you'll need to jump over the missing fragments. Once you reach the surface, there will be no more fighting and the cut-scenes will conclude the quest.