This page of the guide to Horizon 2 Forbidden West contains a list of the recommended skills in the Hunter category, which is primarily concerned with long-range combat.

The skills below are listed in the order they are unlocked on the tree, so the list starts with the cheapest ones. The Valor Surges may be an exception, because they force you to spend more points to develop them in full. 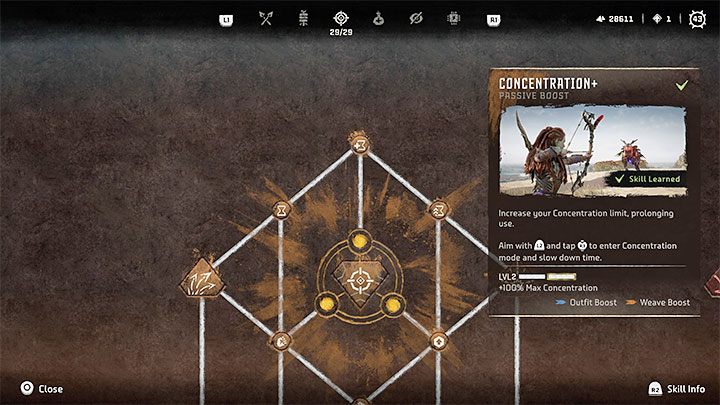 Comment: All skills in this group allow you to use your concentration for longer. This bonus is very important if you often use bullet time when aiming with your bow. You will unlock the first skill of this type early in the game. 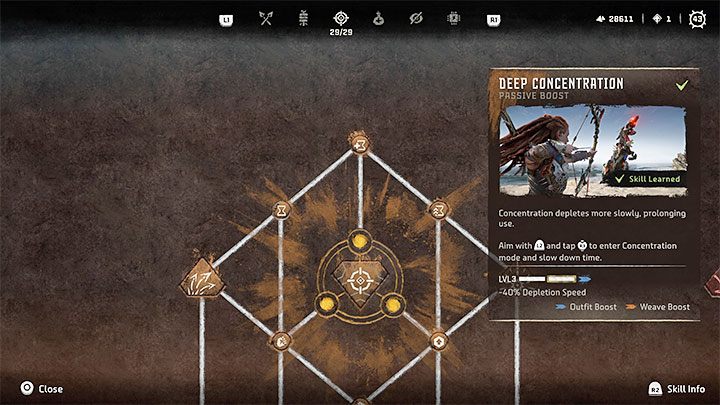 Comment: This is an extension of the skill mentioned above - it extends the duration of concentration, which allows you to use it more often. 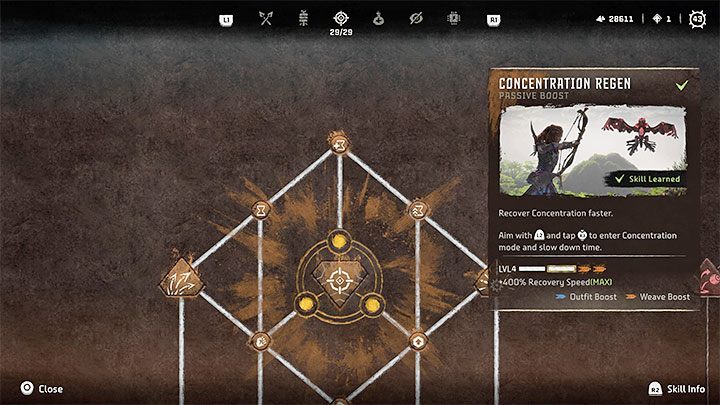 Comment: This skill restores your concentration faster after you've used it for aiming. Thus, you will be able to activate bullet time more often. 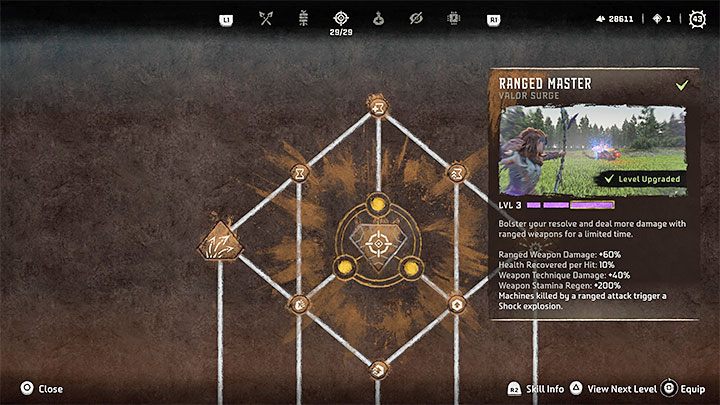 Comment: Activating this skill grants a number of useful bonuses for ranged weapons - increased damage from normal attacks and weapon techniques, as well as health and stamina recovery and the generation of shocking explosions. 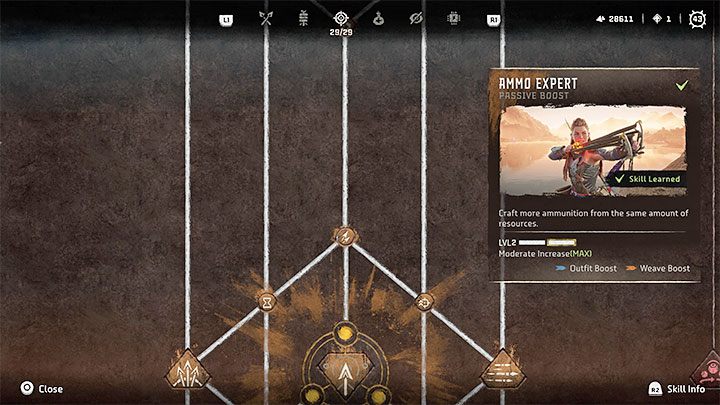 Comment: This is an extremely helpful skill that allows you to craft more ammo from the same amount of resources. You will appreciate it regardless of what ranged weapons you use, and you won't have to look for new ammo materials as often. 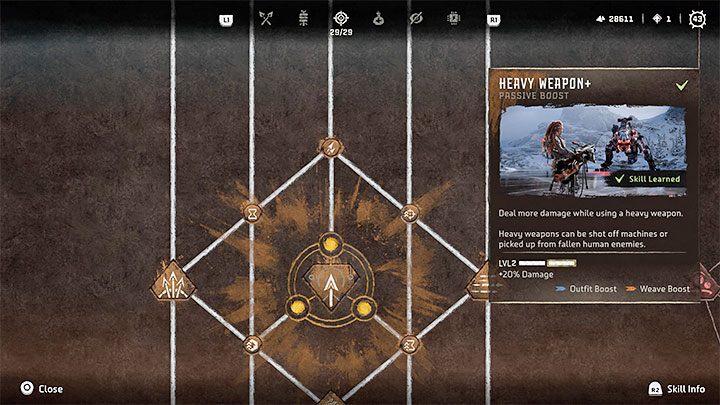 Comment: You will appreciate the advantages of this skill especially in the later stages of the campaign, because then you will find unused heavy weapons more often, as well as detach them from the armors of attacked machines. Virtually all such firearms have high firepower and you can attack your enemies even more effectively. 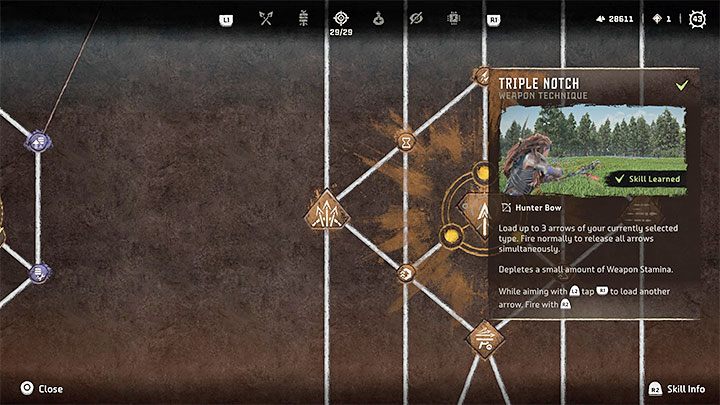 Comment: This is a very good technique related to hunting bows, which are probably the most commonly used ranged weapons. Aloy can shoot up to three arrows at once, which comes in handy when attacking strong and durable enemies. 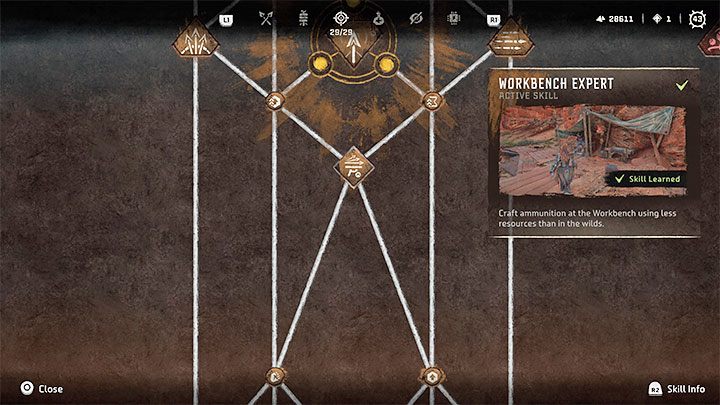 Comment: Acquiring this perk will allow you to use less resources to craft ammo, but the bonus will only work if you use a workshop to do so. This can be very useful in case of unique ammo types that may require rarer ingredients for crafting. 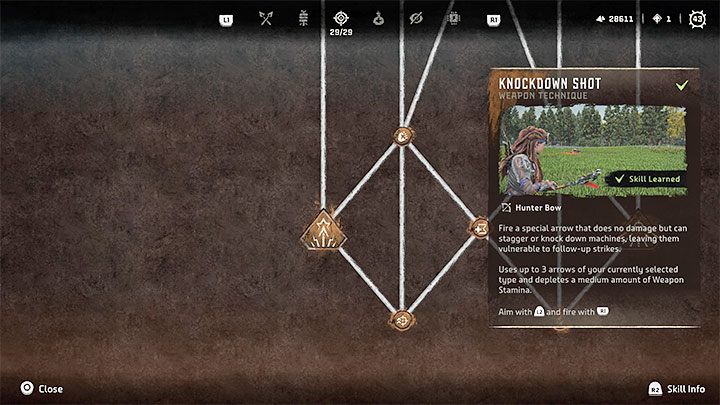 Comment: Using this weapon technique makes you, as the name suggests, able to knock an opponent to the ground. You can use this in many ways, e.g. run up to an enemy and perform a critical strike on them, perform a powerful attack aimed at a defenseless enemy, or more easily target a component on their armor.