This page of the Ghost Of Tsushima game guide informs you whether and how you can change the appearance of the main character's equipment and clothing items. We've separated the appearance of Jin's outfit and the weapons he wields.

Is there a character creator in the game? 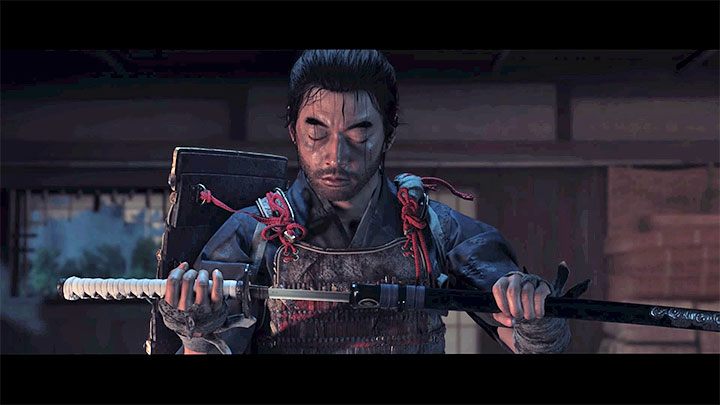 Changing the appearance of the elements of the character's clothing 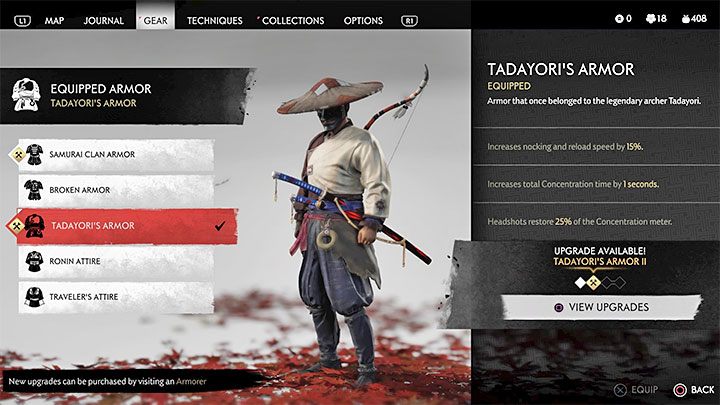 In the case of clothing, you must first be aware that Jin can procure and wear different outfits. Each has separate statistics and applications. For example, samurai armor is ideal for engaging in direct combat with opponents, while Ronin's outfit is the perfect choice for sneaking into enemy locations. Choosing the type of armor in the first place should depend on the intended playing style and usefulness of the passive bonuses it offers, not on whether you like the armor more or less visually. 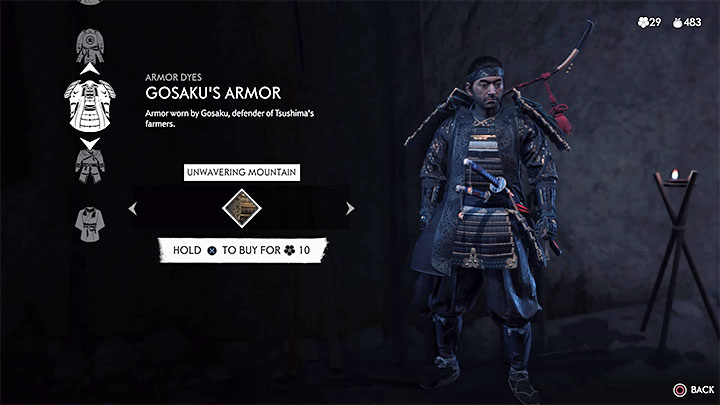 You can change the appearance of armor with dyes. They allow you to choose a new color while keeping the same outfit and the same statistics.

You can get new dyes in two main ways: 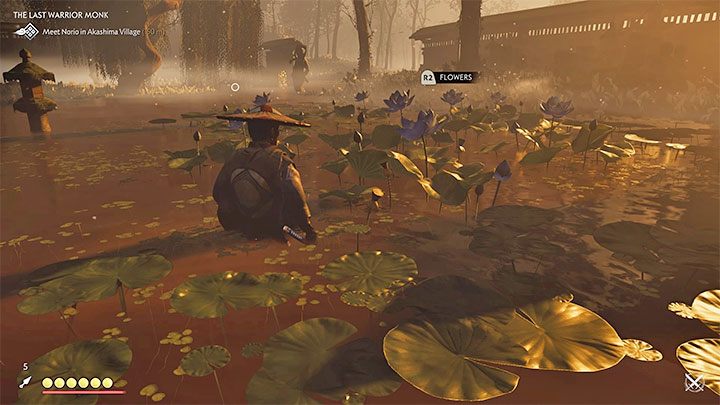 Buying dyes from merchants is not free, unfortunately. Instead, you have to hand them flowers, which are one of the varieties of loot found as you traverse the game world. Try to collect all the flowers you find on an ongoing basis (they will glow in a specific way) and look for locations where more are growing in one place.

Important note - the change of armor color is not permanent. You can open the inventory at any time, choose a particular outfit from it, and then set the type of armor paint. The same option applies for changing the color of the weapon. 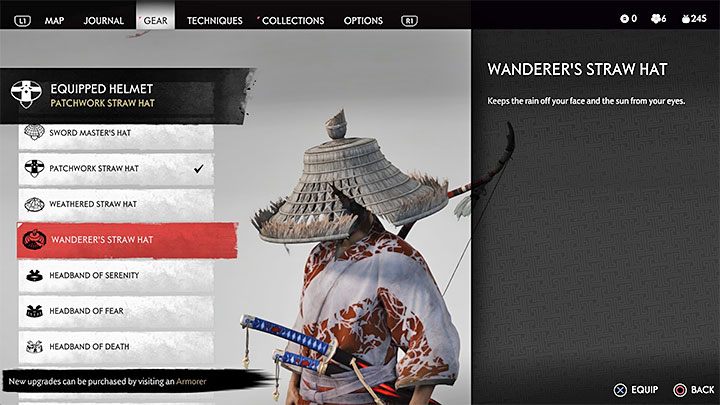 Jin may wear headbands and hats. These items may primarily be rewards for scoring quests or capturing hostile locations, but there are other ways of obtaining them. You can buy them from dealers and complete haiku locations - each one has a different unique headband.

Headbands and hats do not have statistics. Wearing them does not affect the character's abilities. 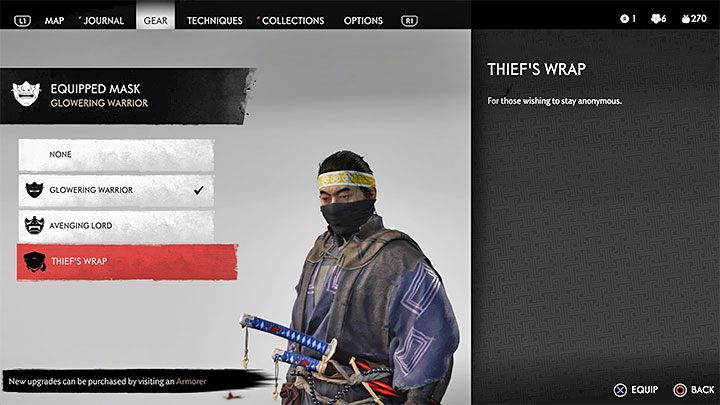 Jin can also use headscarves and masks. In this case, they may be among the prizes for completing quests, although most such items are obtained as gifts given to the hero by the native inhabitants of Tsushima as a thank you for his help.

The masks also do not affect Jin's statistics. They are of purely cosmetic nature. It is worth adding that they are invisible in cut-scenes that involve conversations with NPCs, but you can "reveal" them in the game's options.

Changing the appearance of a hero's weapon 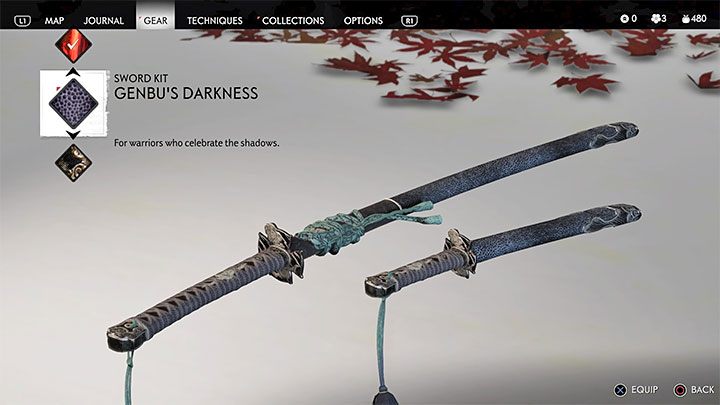 Throughout the game, Jin uses the same varieties of melee weapons - katana and tanto. You can change the appearance of Katana and tanto, as well as their sheaths. This is done by acquiring sword kits.

Kits are awarded as prizes e.g. for doing completing quests. But there are other ways to get new designs - you can buy them from merchants for flowers and visit the Pillars of Honor. These are unique locations and you'll find a new set in each of them.

Tthe game has only one development tree for katana and one for tanto. Swapping a set for another one will not reset progress in improving the weapon. 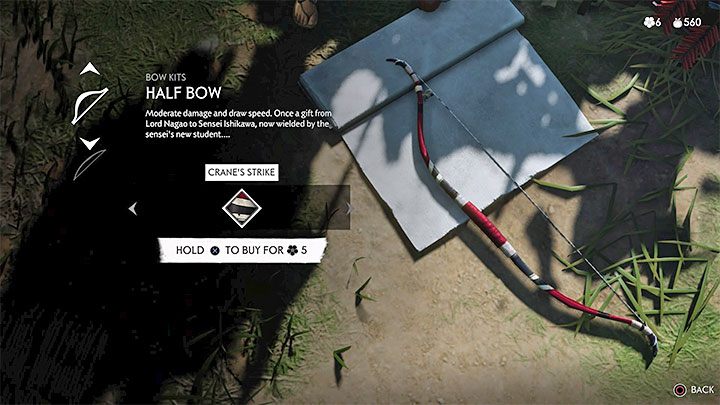 Ghost of Tsushima also allows players to modify the appearance of the bow. Separate paints were made for a short and a longbow. The main methods of obtaining new designs are not different from those described above - they may be unique rewards or may be purchased from merchants in exchange for flowers.

The bow will continue to have the same stats and the same level of development on the distance weapons improvement tree after the appearance change.