In GreedFall, you can develop your character in different ways. One of the first development options is the skill tree. It is divided into six main paths and each of them opens 3 more. This page in our guide contains descriptions of all the skills - you can check what suits your hero best. 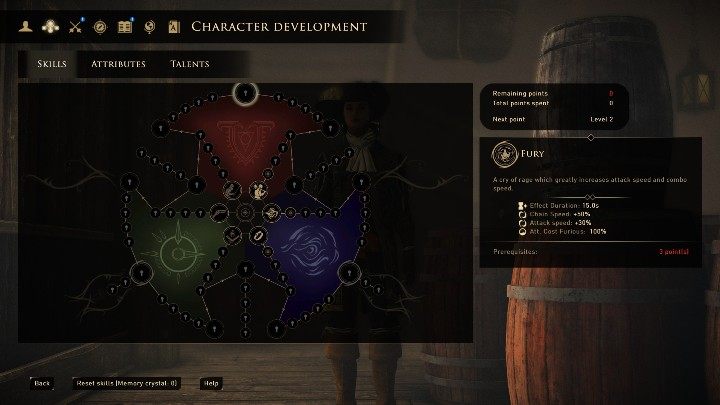 These tree branches develop one-handed and two-handed weapons as well as fury. Focus on these skills if your character wants to destroy everyone who gets in their way.

Allows you to use one-handed weapons - attack, kick and furious attack.

You deal 20 percent more damage to unarmed enemies when using a one-handed weapon.

Kick stuns an enemy for a moment.

It allows you to use two-handed blades - attack, kick and furious attack.

Your attack has a greater range.

Reduces the attacks cooldown, allowing your hero to attack faster.

Increases the power of stunning.

Allows you to use maces, hammers and axes - attack, powerful attack and furious attack.

Increases the damage of blunt weapons by 10 percent.

Each hit stuns the opponent and throws them off balance.

Increases the power of attacks dealt to enemies with armor.

It allows the use of heavy two-handed weapons - attack, devastating attack and furious attack.

Increases the damage of blunt weapons by 10 percent.

You are better at two-handed weapons.

Increases the radius of the shock wave. 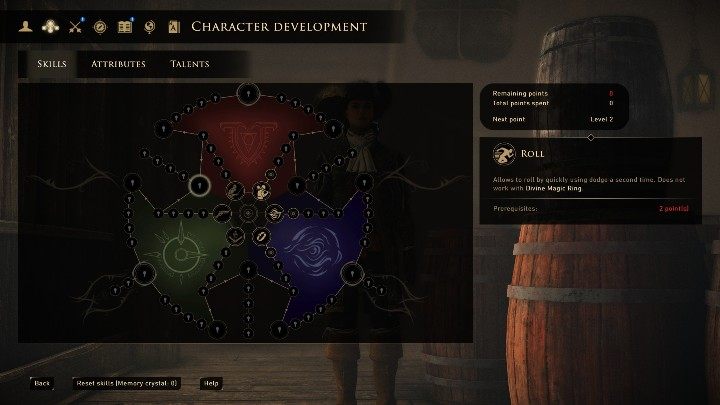 This skill tree can be unlocked after getting - Devastating Kick and Rifle.

Allows you to dodge quickly.

Increases the power of attacks dealt from behind.

Increases the rate of fury regeneration when attacking from behind. 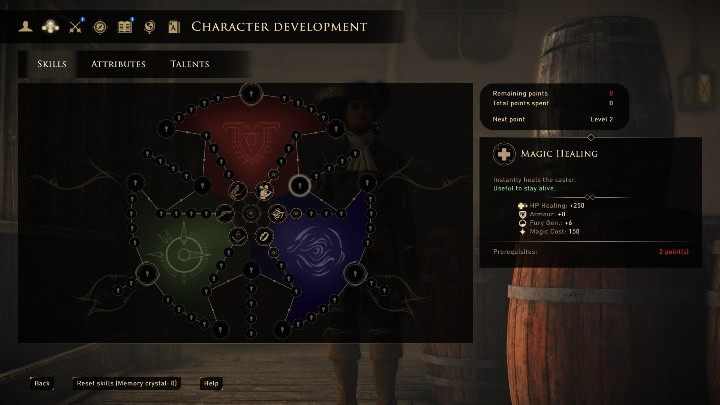 This skill tree can be unlocked after getting - Armour Breaker and Crystallization.

The spell removes a poison from the hero's body.

The spell also restores health and armor of opponents. 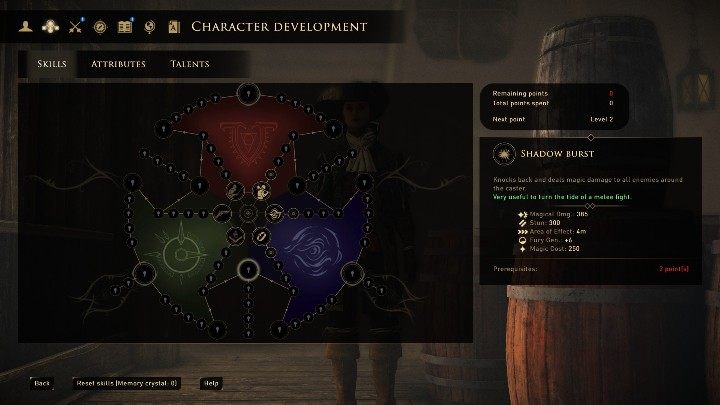 This skill tree can be unlocked after getting - Economical Alchemy and Light Projectiles.

This attack knocks back all enemies in the area and deals damage + stuns them.

Increases the range of Shadow Burst. 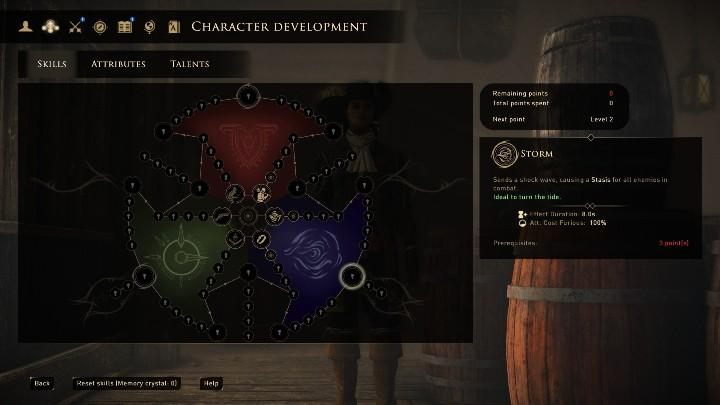 These skill trees develop the magical abilities of your hero.

Immobilizes enemies for 8 seconds. If you receive damage while this spell is still active, all enemies will wake up.

Extends the Stasis duration by 20 percent.

Stasis destroys the armor of the opponents.

Reduces the mana cost of this spell.

Each enemy inflicted with Stasis becomes more vulnerable to attacks.

Shield of The Enlightened

Strengthens and restores the hero's armor.

The shield increases the balance of the character.

If the enemies destroy the Shield of The Enlightened, they will regenerate your fury.

Creates a shock wave that causes the stasis effect on surrounding enemies.

Increases the stun power and makes the opponents more vulnerable to magic.

Increases the strength and duration of Vulnerability Storm.

Allows you to use magic rings.

Increases the speed of the combination when using Shadow Impact.

Allows you to jump backward instantly after dodging. 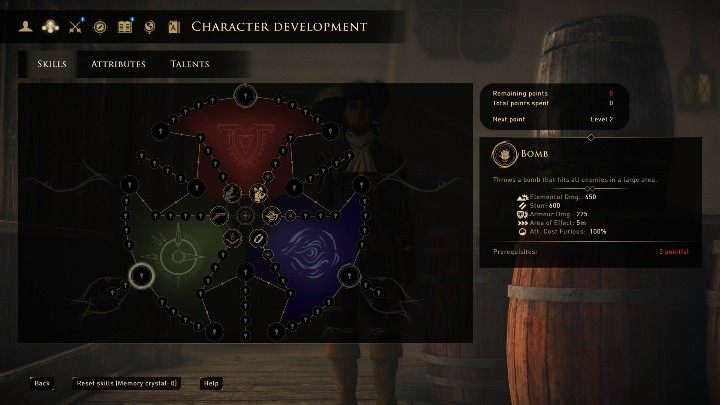 These skill trees develop the ranged abilities of your hero.

Allows the use of ranged weapons.

Allows you to use a rifle.

Allows you to use potions on weapons to increase their attack power.

Increases the power of potions.

You can throw bombs.

Increases the strength and range of bombs.

Allows you to use alchemical potions that explode on contact with the enemy.

Allows you to place traps during combat (after dodging).

Increases the damage dealt to armor.

Allows you to re-collect ingredients from disarmed/destroyed traps.

Allows you to throw grenades farther.

A phial poisonous environment upon explosion.

The stasis potion has an increased duration.

Increases the effective range of skills from this tree.

Best skills to start with

Skills affect your hero in every way. They determine what you will be able to do and how you will behave. If you don't buy weapon skills you won't be able to use any weapons.

But you don't have to worry - skills aren't mutually exclusive.

Warrior - the perfect skill for strong, determined warriors is a skill tree dedicated to this class. These skills develop attacks and increase their strength. In addition, it will be a good idea to develop a roll. It will allow you to quickly dodge opponent's blows. 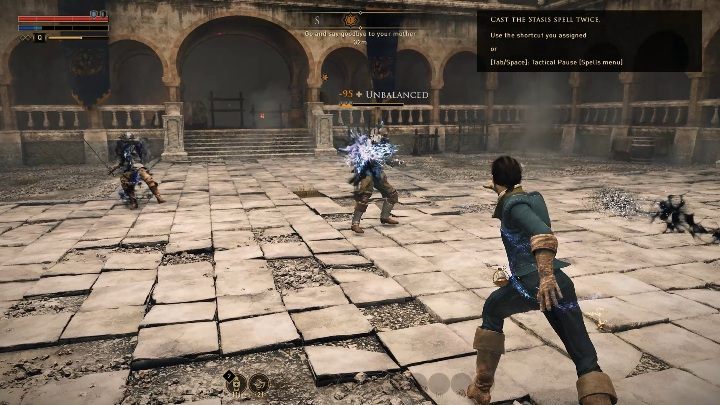 Magic - a good idea, in the case of this character class, will be not only developing a tree of magic abilities, but also investing in magical healing. It will regenerate 250 points of your health.

Technical - in the case of this class it is worth to invest in the skill of Shadow Impact. This attack not only knocks away enemies but also makes them more vulnerable to damage.