How to Unlock: Approach the Flophouse [Elaaden]

This page contains walkthrough of The Flophouse mission. This is one of Heleus Assignments (side quests) in Mass Effect: Andromeda, which you can start during exploration of Elaaden, soon after landing there. As the name suggests, the mission involves investigating the Flophouse. 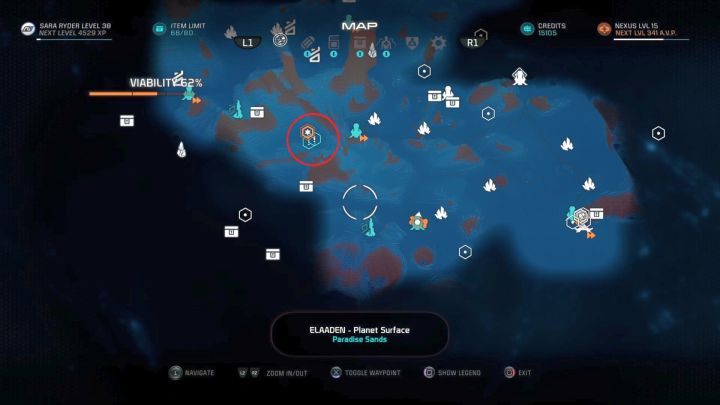 In order to unlock this mission you just need to find the Flophouse and get near it - that will add the mission to your journal. The Flophouse is in the west part of the map - west from the starting point on Elaaden. The exact spot is marked in the picture above. 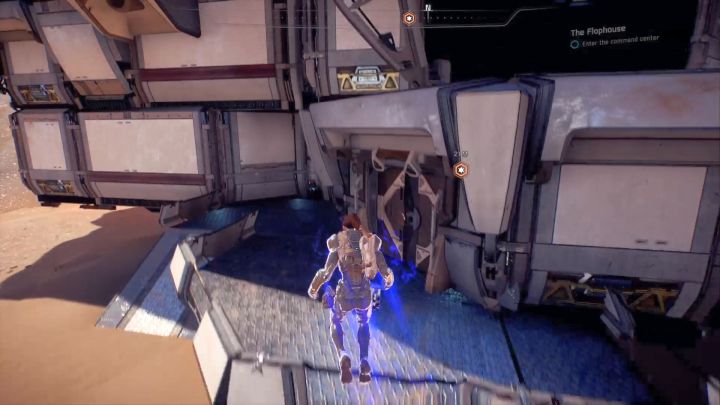 You just need to approach the entrance to the command center.

When you get there you will receive an objective to enter the command center. However, as you will soon learn, the entrance is closed. What's worse, your attempt of getting inside has been noticed and the whole area gets flooded by various opponents, whom you have to defeat. At the same time you get a new objective of overriding the security station. 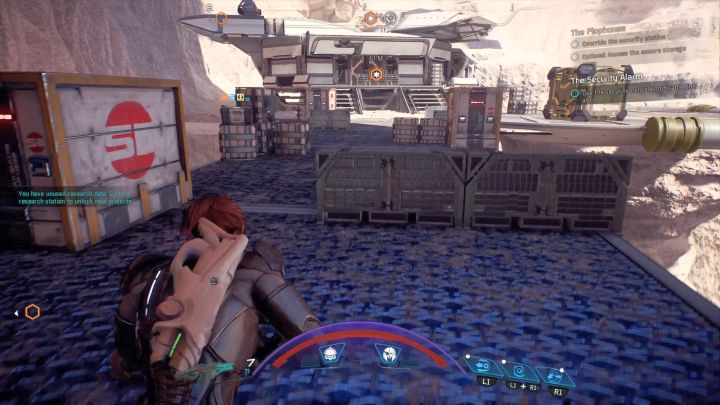 Afar, there is a building with the terminal that you must hack.

An optional objective appears, requiring you to override the security station. Succeeding in that unlocks an access to a secret room. If you don't care about some random items hidden inside, you may as well ignore that. Now follow the navpoint on the screen, while eliminating enemies on the way. After a while you will get to a building with a terminal inside. Interact with that in order to proceed to the next phase of the mission.

Hold your ground until the security can be hacked 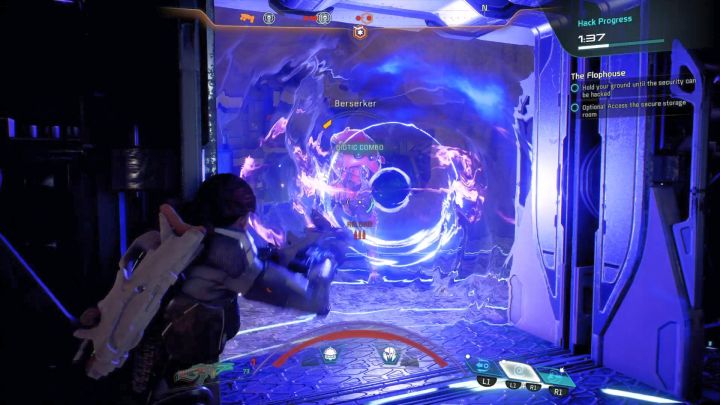 It is worth to stay inside in order to make it difficult for the enemy to hit you.

As soon as you manage to hack the terminal inside the building, you will be given an objective to hold your ground until the security can be breached. It is a good idea to stay inside the building with the terminal - this will grant you a cover from part of enemy attacks as well as help you shoot effectively thanks to the high ground. Hold your ground in the building and wait until the hacking process is over. Then kill off all remaining enemies in the area and collect the items they drop.

Clear out the command center 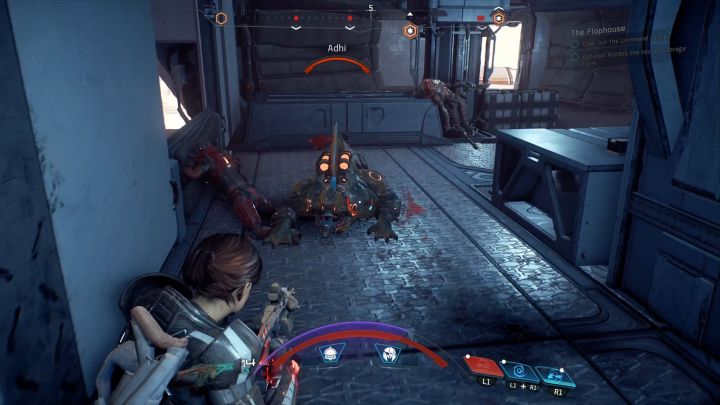 This phase of the mission requires you to kill all enemies on the ground floor of the command center.

Your next objective is to clear out the command center which you have just gained access to. Run into the building indicated by the navpoint and clear out the ground floor of enemies. Then dash upstairs and walk through the door in order to start another skirmish.

Defeat the leader of the flophouse 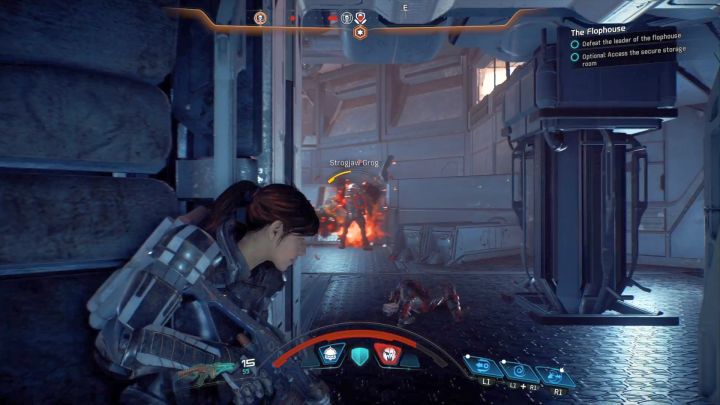 Strogjaw Grog is the leader of the place and a mini-boss.

There is a large group of opponents to defeat here, among whom there is a mini-boss named Strogjaw Grog, who is also the leader of the soldiers stationed in the Flophouse. He is not a major threat - he is just a stronger version of the Krogan Berserker. Focus all your attention on this enemy and order your companions to attack him as well, and the enemy is bound to drop dead in just several seconds. 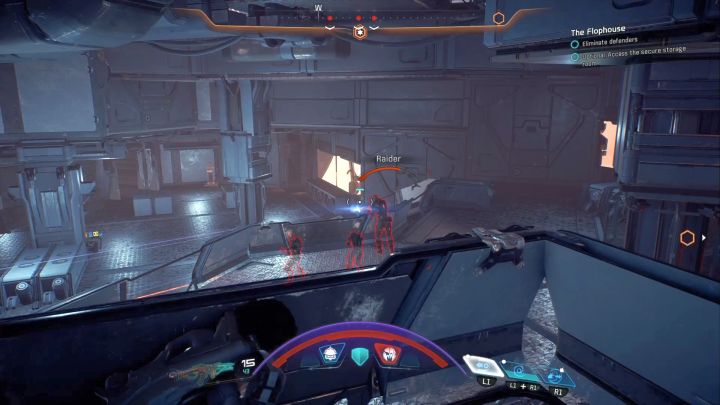 You must clear out the building of the remaining enemies.

When you defeat the leader your next objective is to eliminate the defenders. You must simply clear out the floor where you fought Strogjaw Grog by killing all the enemies there. Completing this objective is quite simple thanks to the abundance of covers in the room you can hide behind.

Clear the flophouse of scavengers 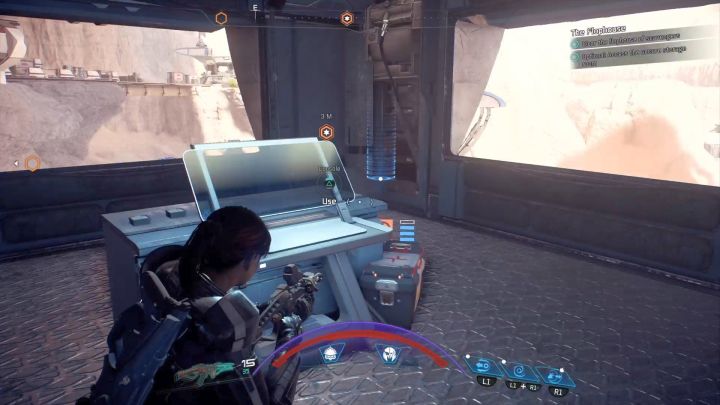 Finally, you just need to interact with the console in order to complete the mission.

When you kill off all enemies the last phase of the mission begins, which may be a little bit confusing. What you really have to do is to reach the console directed by the navpoint and interact with it. When this is done, the mission is completed.