How to unlock: Automatically after examining one of ZK trackers.

Here you can find the walkthrough for The Little Things That Matter quest. This is one of the side quests in Mass Effect: Andromeda game that belongs to the category called "Allies and relationships". Initially, this quest is about finding the trackers that are in those systems where Andromeda Initiative outposts were established. However, later you make an important discovery regarding one of the runaway Nexus scientists. 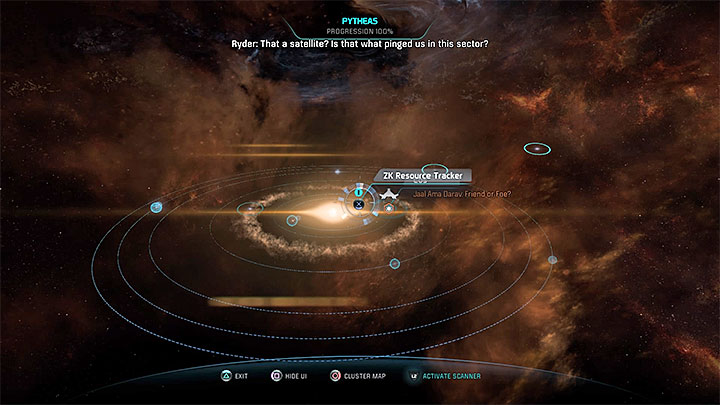 This quest doesn't have a fixed place in which it can be unlocked. You can get it after establishing at least two Andromeda Initiative outposts on planets that are suitable for colonization - Eos (Pytheas system), Voeld (Nol system), Kadara (Govorkam system) and Elaaden (Zaurbray system).

When you go back to one of the systems with a colonized planet you can receive a message from Suvi. You learn that someone or something tried to establish a contact with the Tempest. Scan the system again and you can find a TK tracker - the example is presented in the picture above. Then, examine the newly discovered anomaly. When you get closer to it you find a satellite that will immediately explode (you also get Andromeda Viability Points). After that the quest is added to your journal.

Warning - Examining the first satellite and other ones that you can come across during this quest grants you Milky Way Research Data.

Speak with Addison by using vidcon on the Tempest

Go to the vidcon and speak with director Addison about the ZK trackers. You learn about the tracking devices and the disappearance of Dr. Kennedy.

This goal is connected with three other systems with colonized planets that must be visited in order to find the tracking devices. If the outposts are not established yet then this quest becomes suspended.

In each system you must repeat the same steps that allowed you to unlock the quest - use the scanner, examine the trackers (anomalies) and make the satellites explode.

Find the source of signal in Nalesh system 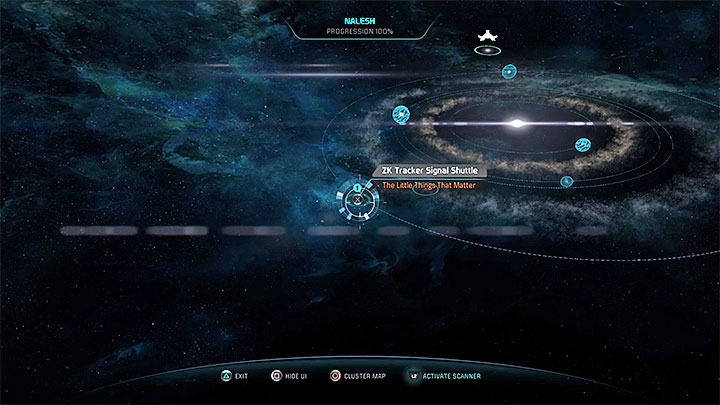 This objective should appear in the journal after finding and examining at least two ZK trackers. Travel to Nalesh system and find an anomaly, the shuttle that serves as a transmitter. By getting closer to it you can listen to the conversation during which you can hear, among others, Dr. Kennedy. You learn that she is pregnant and that her baby can be the first that is born after arriving at Andromeda galaxy. After the conversation go back to the vidcon and speak with director Addison about Dr. Kennedy and her (forbidden) pregnancy.

This quest can be continued only after you visit all four systems that has colonized planets. You must also search for anomalies that hide the tracking devices. After you receive this mission objective you must land on Voeld and head to the marker placed in the north-east part of the planet. 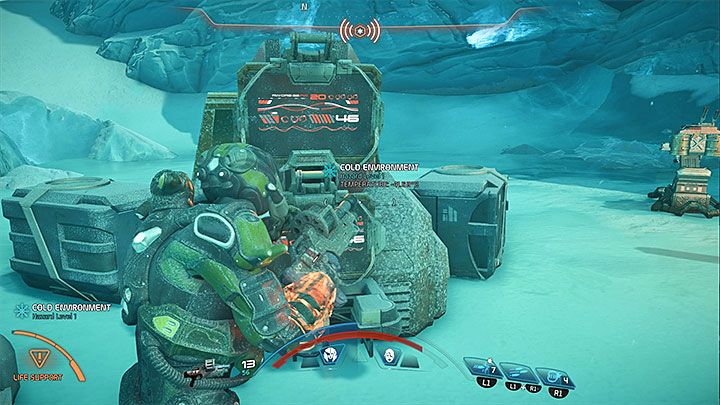 You can activate turrets to defend the shuttle more efficiently

When you arrive at the target destination you must immediately join the fight during which you will defeat Roekaar and Kett alternately. You should use your AOE abilities and powers because you must eliminate bigger groups of rather weak enemies. You can also use the two turrets placed near the shuttle. Use the nearby terminals to activate them. Fight until all enemies are defeated so the shuttle can leave safely.

Contact with Addison by using the vidcon on the Tempest

Return to the Tempest and use the vidcon to speak with Addison and Dr. Kennedy. During this conversation you can show your support to the idea that Kennedy and her baby should be under strict observation or say that they can handle themselves without any control. Additionally, you can suggest Kennedy that she can settle on Eos or go back on Nexus but those decisions doesn't matter. Regardless of your choices the quest will be completed.