How to Unlock: Reach one of the monoliths on [Kadara].

This section contains a walkthrough for Healing Kadara's Heart, one of Heleus assignments (side quests) found in Mass Effect: Andromeda. The quest involves finding three monoliths and activating them to unlock access to a new Remnant vault, which is the key to make the planet more viable for colonization. 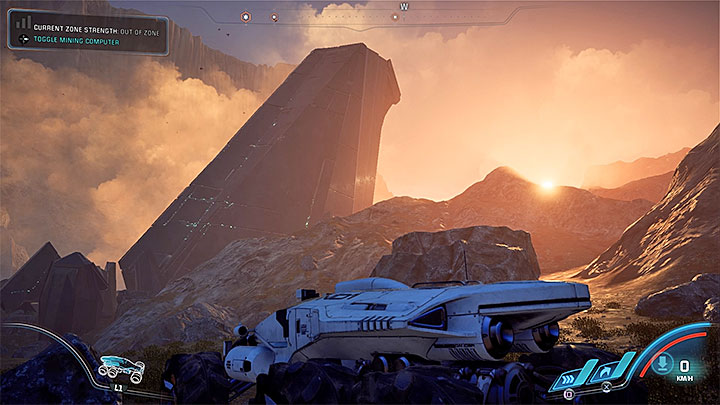 The first monolith can be found north from Kadara Port

The monoliths can be accessed in any order. The first one is found north from the Kadara slums. Unfortunately, instead of simple one-way trek, we'll need to use the main roads to ride in a counter-clockwise manner (you'll be going past Dr. Farenth's lab, the building used in Modern Medicine). 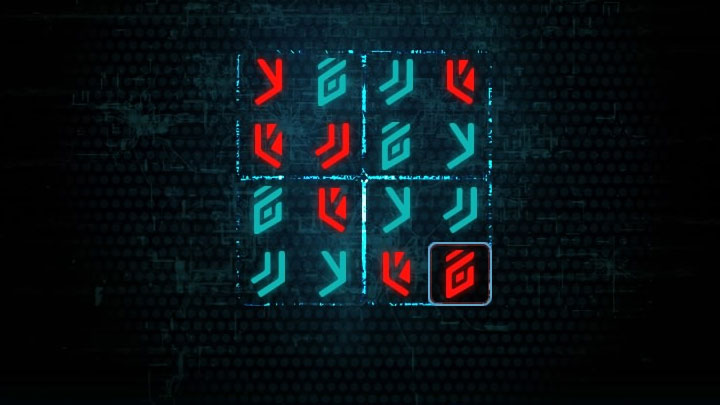 You'll need to find three glyphs in order to activate the monolith. Use your scanner to find them. Two glyphs can be activated from the ground, with the final one located on top of a ramp-like structure. Once you've scanned the glyphs, proceed to the Remnant console and activate it to begin a riddle. Use the tip shown on the screenshot above or simply utilize an override key if you have one. 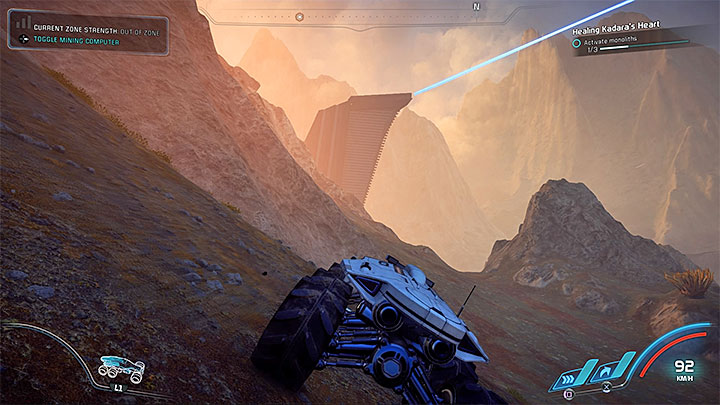 The second monolith is located not far from the planned outpost

The second monolith can be found in the western part of the map, south-west from the planned Initiative outpost (Settling Kadara). Once you've reached the area, help a group of angara in repealing the exiles, then start looking for two glyphs. Both items can be scanned from the ground level, without having to climb the structure. This monolith is not protected by a riddle, and will be activated instantly. 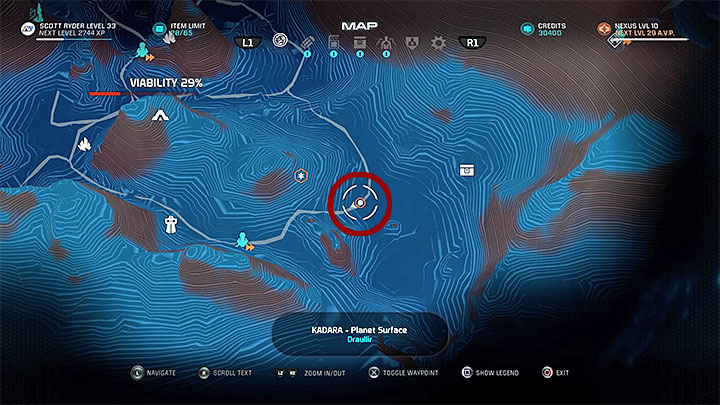 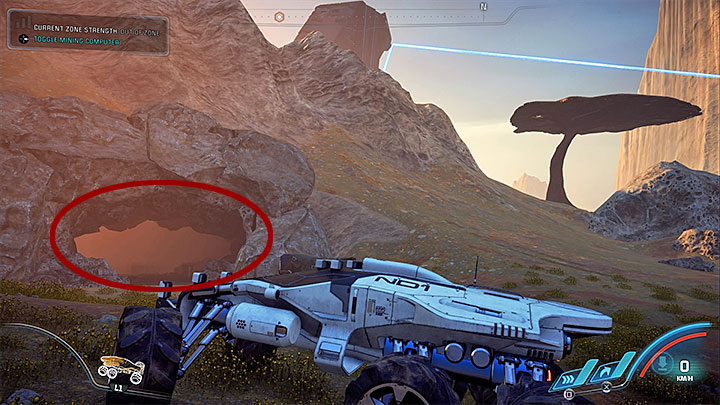 The final, third monolith is located in the southern part of the map. Locating its console can be somewhat troublesome, as you'll need to make your way through the nearby mountain (the entrance to which is shown on the screenshot above) which is located west from the monolith icon found on the Kadara's map.

Once you've entered the cave, start eliminating the encountered exiles, which are supported a Hydra (use covers and armor-piercing weaponry and powers). Clear the area, then find four glyphs that are located in different parts of the cave. Finally, use the Remnant console. Similarly to the previous monolith, the installation will be activated immediately.

Proceed to the vault

The entrance to the vault is located in the northern part of the wastes - consider using the main road to avoid any difficult terrain obstacles that would hinder your progress. You may encounter some monsters in the vicinity of the vault (including an eiroch) but a bit of finesse should enable you to avoid them completely. Proceed to the cave and use the gravity well. 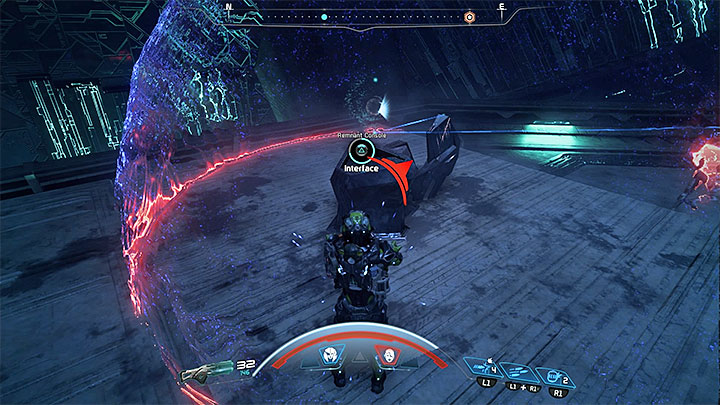 The force field is quite powerful - activate each console quickly

Use the main console, then start activating the ones located across the room. Approach each console quickly, as you'll be subjected to a force field which deals small amounts of damage. The way forward will be unlocked once you've managed to activate all of the units. 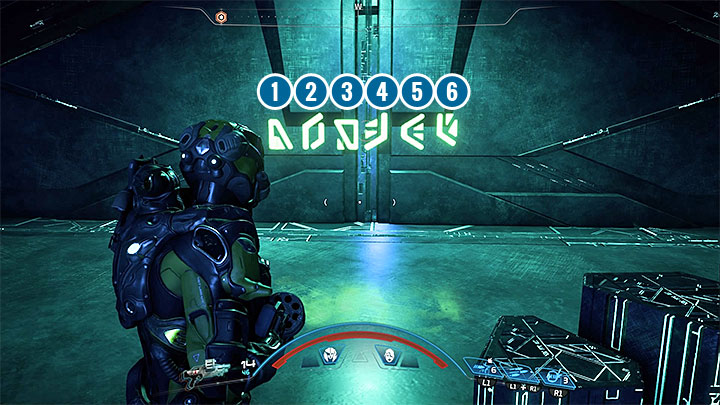 Make your way forward. Some parts of the floor are electrified - perform accurate jumps to avoid losing health or shield points. Stave off the exile units and follow the quest marker in search of the lockdown console.

Time for a short detour. Make your way to the northern part of the crypt to find a locked treasure room. The door is guarded by a glyph consisting of five symbols, each corresponding to one console. Use the screenshot above or follow the instructions below to unlock the door.

Solving the puzzle gives you access to a room with a few interactive objects (scanning them yields Remnant Research Data) and a Remnant Data Core (a valuable artifact connected to one of Peebee's quests). 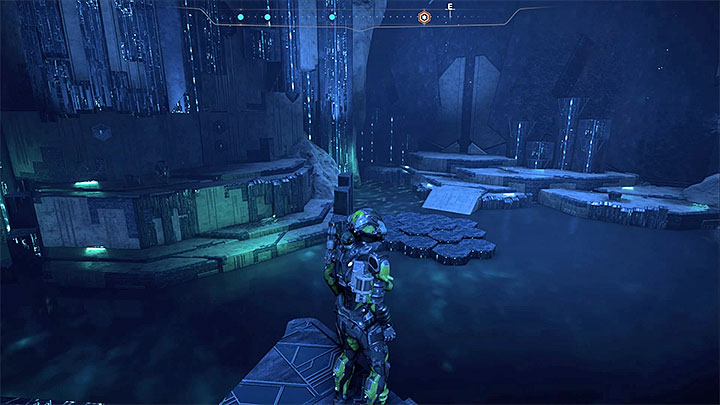 Continue the task by jumping to one of the platforms in the north-eastern part of the vault. Proceed forward and defeat the Remnant guarding a new console. Activating it raises a few blocks to create a suitable evacuation route. Now, approach the entrance to the eastern hall and unlock the door by using the nearby console. 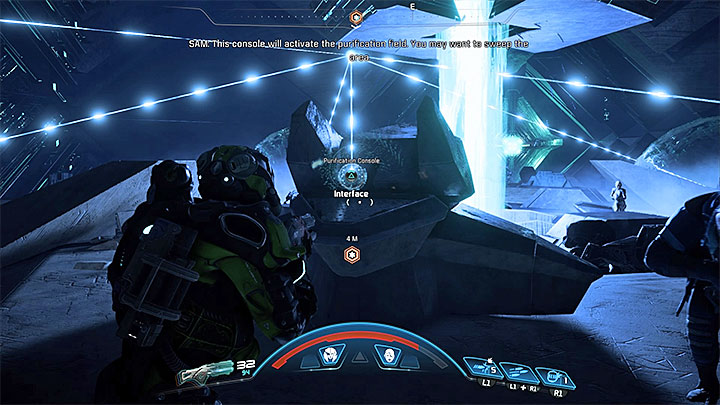 You'll find yourself in a room with a number of new consoles surrounding a central mechanism. Similarly to the initial phase of exploring the crypt, approach each console decisively, as the force fields around the consoles deal damage in rapid succession. Moreover, the process will be interrupted a group of exiles converging on your position. Finalize the procedure by activating the purification console.

Avoid the purification field and leave the vault 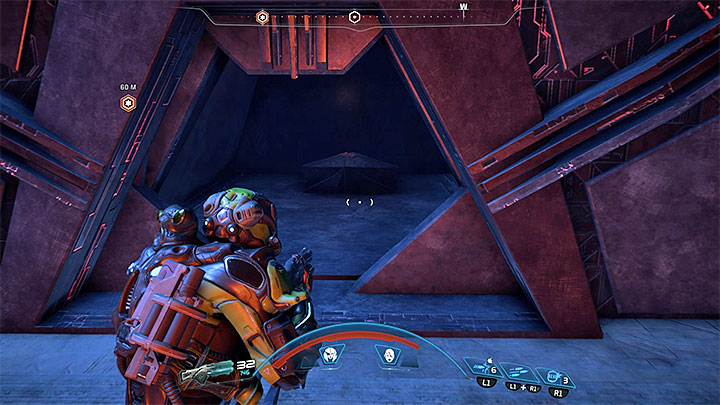 As previously, the party has to escape the vault to avoid the purification process. Jump from platform to platform to avoid the biomass. Once you've found your way to one of the larger platforms, visit the storage room (shown on the screenshot) which was unlocked when the purification process was activated and open the container with a number of valuable items. Your final objective is to return to the first room and use its console to finalize the purge.

Note - The quest increases Kadara's viability level by a hefty 40%.