Here you can find the guide for minor quests that can be unlocked in Mass Effect: Andromeda game during your stay on planet Voeld. These quests are not very complicated, although completing them allows you to obtain valuable artifacts and gain additional XP and Andromeda Viability Points.

How to unlock: Speak with Dr. Harihn [Voeld: Resistance Base].

In this quest you must deliver medical supplies to emergency caches in various parts of Voeld.

This quest can be unlocked during your stay in the Resistance Base, the location where you begin your exploration of planet Voeld. When you are there, search for Dr. Harihn. From him, you can get the request to deliver medical supplies to emergency caches located in various places on the map. After the conversation find the place where medical supplies are kept and take them. 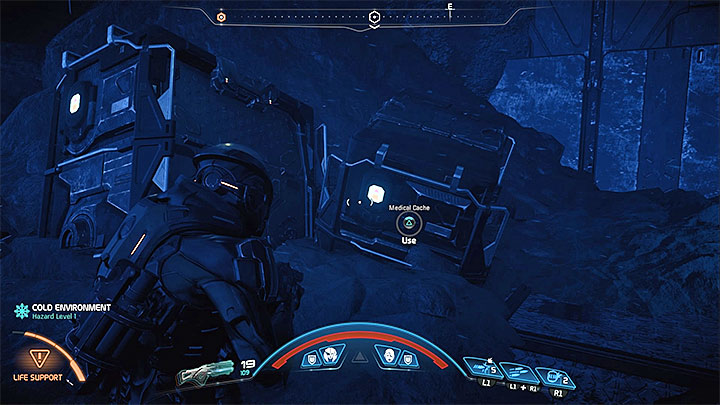 The supplies must be delivered to three caches placed in various parts of the planet. Those caches are marked on the map and you can access them in any order. Near one of them you can encounter heavily wounded Yeda. Talking with her is optional, although you can inform her about leaving the supplies which she can use to heal herself.

You must also know to one of the caches is on the mountain path that is used to access the Kett base during Remove the Heart quest. It is recommended to wait until you take care of that quest so, when you are on your way to the base, you can leave the supplies. After visiting all three locations you can return to the quest giver in order to complete it. You'll receive a supply of utility items and a thank you from the quest giver.

How to unlock: Find the datapad [Voeld: Resistance Base].

In this quest you must investigate the problem with supply delivery on Voeld. To do that you must defeat Roekaar. 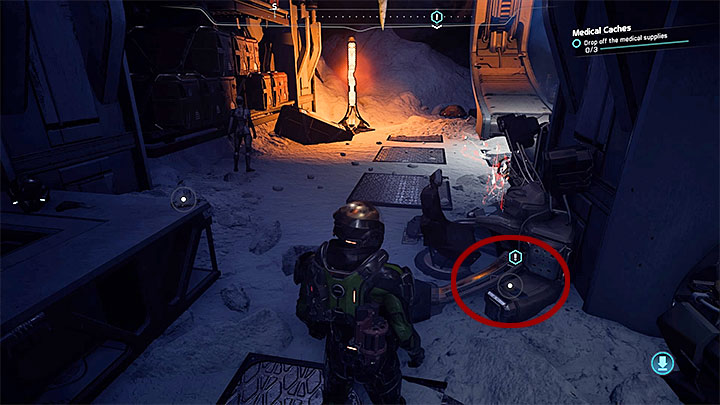 This quest can be unlocked during your stay in the Resistance Base, the location where you begin your exploration of planet Voeld. Find the datapad marked in the picture above and read the report.

Olisk can be found in the Resistance Base. After talking with him go to the requisition terminal and interact with it.

Get to the drop point 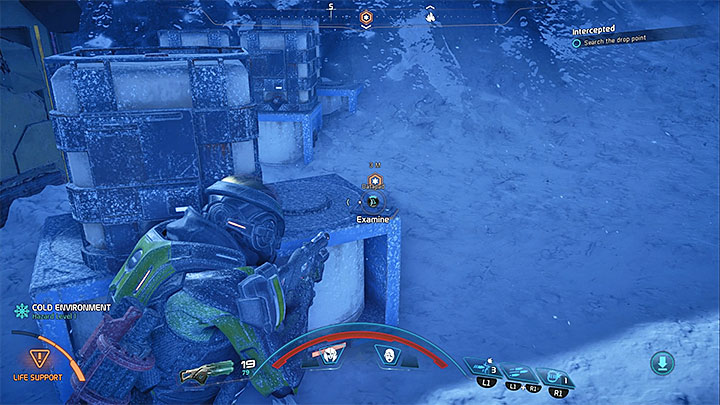 The second datapad os on the drop point

The drop point is close to the base, north from it. When you get there you must fight with a group of Roekaar and you should focus on close combat so their snipers won't be able to attack you. After the fight search for the second datapad. Examining it completes the quest.

In this quest you must deliver the data drive to Techiix. This item is obtained from Niilj after you free him in Kett prison.

This quest is unlocked during the final stage of the other side quest - Stage a Rescue. The final part of said mission is about getting to Kett Prison in the north part of the map where you can find the imprisoned Angara. There, you must free Niilj and speak with him after the fight. He gives you Kett data drive and asks to deliver the drive to Techiix. 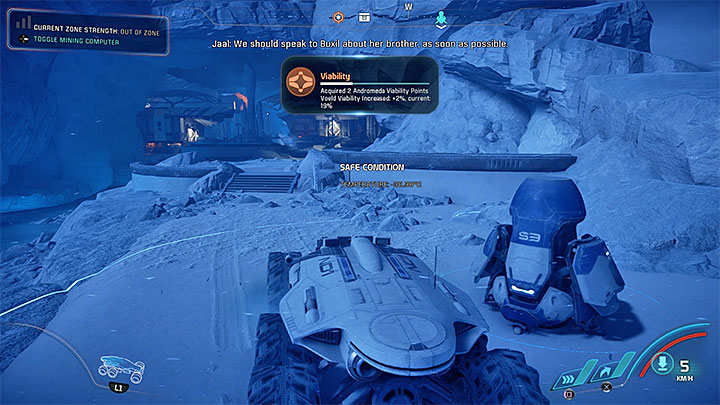 Take the drive to Techiix

Find Techiix on your map and go there. When you reach your destination you should speak with Buxil and give her the drive from Niilj. You receive thanks and unlock a new side quest called Remove the Heart in which you plan the attack on Kett base on Voeld.

How to unlock: Automatically during the exploration [Voeld]. 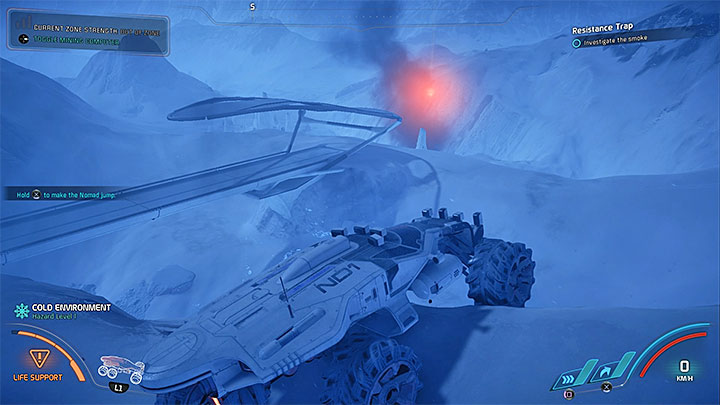 You can unlock this quest during your exploration of the center part of Voeld. The quest is automatically added to your journal after you get closer to the place where Angara fights with Kett - you can recognize the place by the smoke.

Help your allies in defeating the Kett and, after the battle, speak with Bennas in order to learn about the trap. Regardless of how you evaluate her plan you must defeat the Kett reinforcements that will appear in the area. This new battle is harder to win, especially because you are attacked from a few sides. When this happens focus on attacking one group, decide to fall back to a safe place so you won't get surrounded or order your team mates to fight another group. Winnig the battle ends this quest.

Unlocking: Automatically after receiving a message from Orev [Voeld: Techiix]. 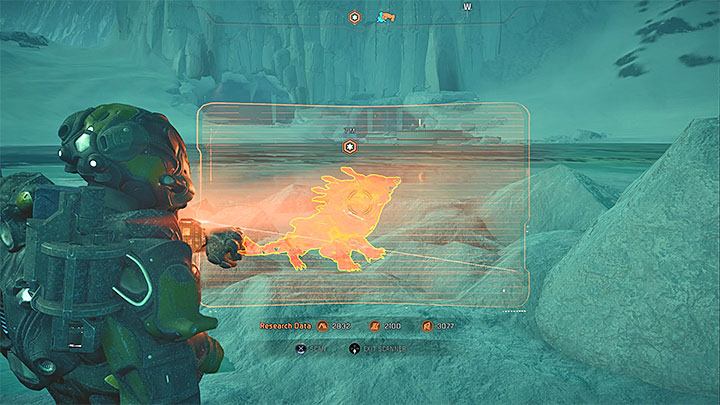 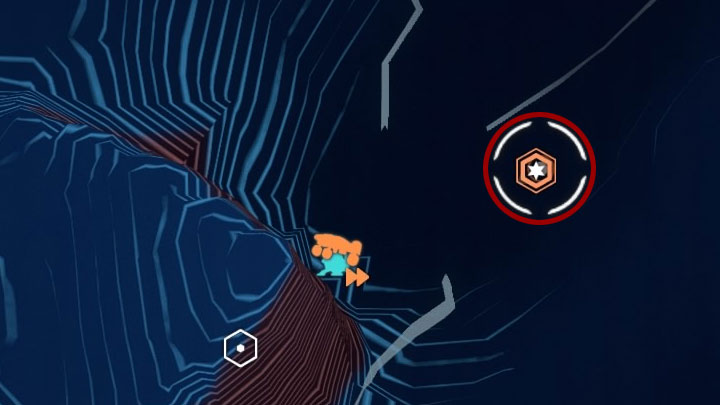 You can unlock this quest when you reach the "neutral" location called Techiix, located in the center of planet Voeld. Ignore the huge cave and investigate the ice-bound area to the northeast from Techiix. While exploring the area, you should receive a radio message from sniper Orev. He asks your help in locating a hiding Wraith. Activate the scanner and search for the monster - its exact location is shown in the above images (you have to scan the Wraith).

Orev will kill the beast without your help. Talk to him to officially end the quest (you can also ask some optional questions). 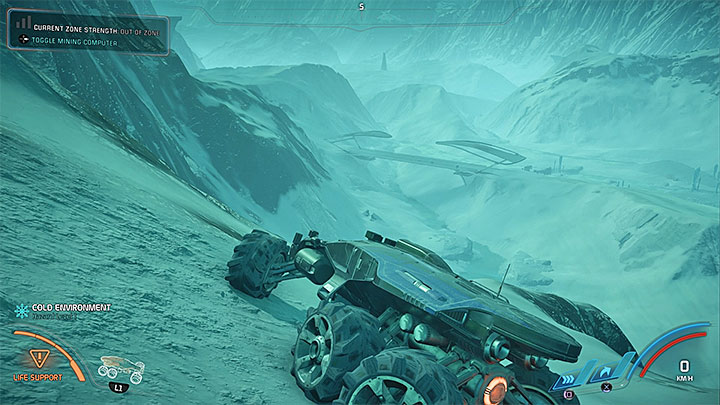 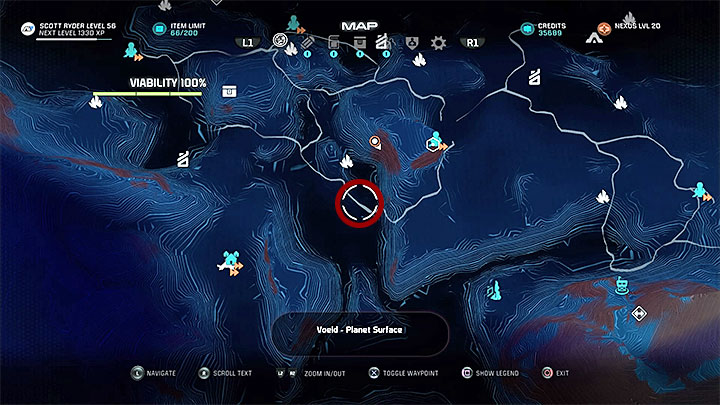 You can unlock this quest when you approach the bridge shown in the image on planet Voeld. It is located in the center of the map, relatively close to the southwest from Techiix. Once you've reached the bridge, start fighting the kett but watch out for the Anoninted and other elites. 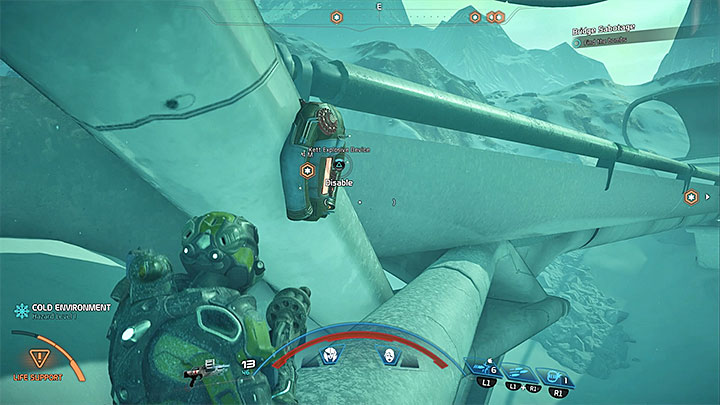 One of the four bombs is hidden behind the railing

After the fight, examine one of the devices on the bridge. You'll learn that the kett had placed several bombs and intended to detonate them. You can reach the explosives in any order. Two bombs are directly on the bridge, one is underneath it, and one is hidden behind the railing (perform a precise jump in order not to fall down to the ground). Disarming them ends this simple quest.

Unlocking: Automatically after investigating one of the battlefields [Voeld]. 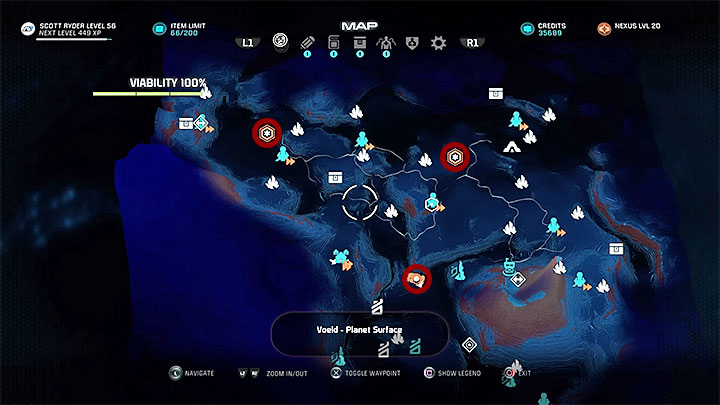 This quest is very easily missed since it can be unlocked only by reaching one of the battlefields and finding a datapad. On planet Voeld, there are three such places, all of them shown in the above picture. Go to any of these locations. Finding the datapad will add the said quest to the journal, and the game will then mark the remaining two spots on the map. In total, you have to find three datapads (one on each battlefield). 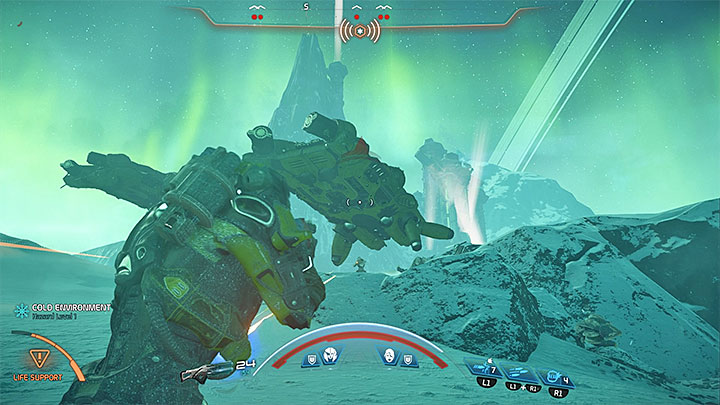 Reinforcements arrive when you reach the last place

Having listened to SAM's commentary, head to the coordinates it provided. Once there, you have to prepare for combat - two kett shuttles will arrive. Luckily, defeating the enemy shouldn't be too difficult because their forces don't include elites. Locate one more datapad after the battle. Reading the message ends the quest.