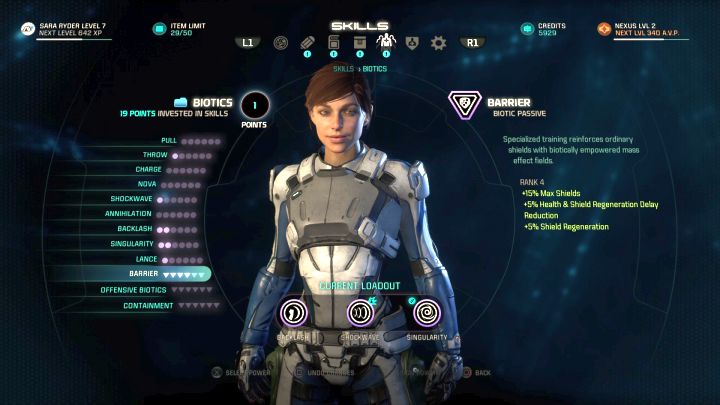 Character development in Mass Effect: Andromeda is quite specific since it does not feature attribute points such as strength, agility, or intelligence that are found in other RPGs. In this game, character development is based on distributing skill points that we gain as the protagonist advances to higher levels. Initially, you will receive 3 points per level, but this amount increases over time. Skill points are also connected to Profiles which are described in a separate chapter of this guide.

Skill points can be spent in the following skills trees:

Remember that the player is not in any way limited in terms of character development. We may invest all skill points into one tree to wreak havoc with firearms or distribute them equally between two (or even three) of them to create a character that might not excel in any field but can manage in any situation.

It's a good idea to plan character development ahead because every point spent in a given skill tree increases the effectiveness of most of the unlocked abilities (if an ability is affected, this information is included in its description). If, for example, you unlock Barrier from the Biotics tree, it will increase the shields level by paltry 2%, at first, but this value grows with every point invested in the Biotics tree. The conclusion is that the system rewards spending points in a single tree, but it is ultimately the player's decision what to do with the points gathered. 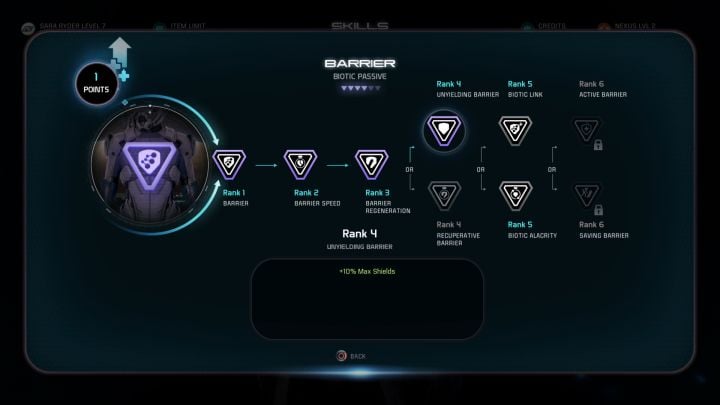 Every ability - no matter if it's active, passive, or companion-related - offers two different variants starting at Level 4. These options are mutually exclusive (you cannot unlock two Level 4 enhancements) but, at the same time, offer unique and powerful bonuses which makes it profitable to develop several abilities to the maximum level.

And finally, it's good to keep in mind several things as far as character development is concerned: