How to unlock: Speak with SAM during A Better Beginning main quest [Nexus: Habitation Quarters].

Here you can find the guide for Ryder Family Secrets quest. It is one of the side quests in Mass Effect: Andromeda game. The quest is from "Allies and relationships" category. During this mission you must find memory triggers that are scattered around the world. Those items allow to remove SAM's memory locks and watch Alec Ryder's memories. 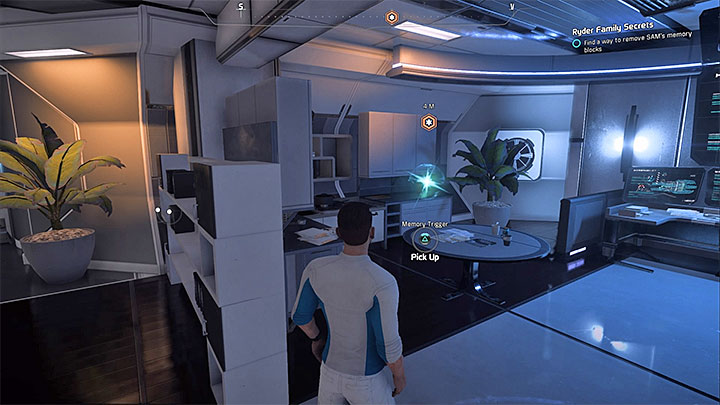 The first memory trigger is in Alec Ryder's cabin

This quest is automatically added to your journal after the meeting with SAM in Nexus: Habitation Quarters right after the start of the main quest A Better Beginning. Right next to the place where you spoke with the AI you can find Alec Ryder's cabin. Go there and find the first memory trigger. Interact with the object.

After watching the memory you can ask SAM additional questions and check the computer in Alec's cabin where you can listen to the newly unlock audiolog. After checking all new options you can go and search next memory triggers that are hidden on planets in Heleus Cluster that have not yet been explored by you.

New memories are unlocked after finding and examining a certain amount of memory triggers. By doing that you can unlock five memories and new audiologs in Alec's computer. After watching all of the memories you must have a long conversation with SAM. 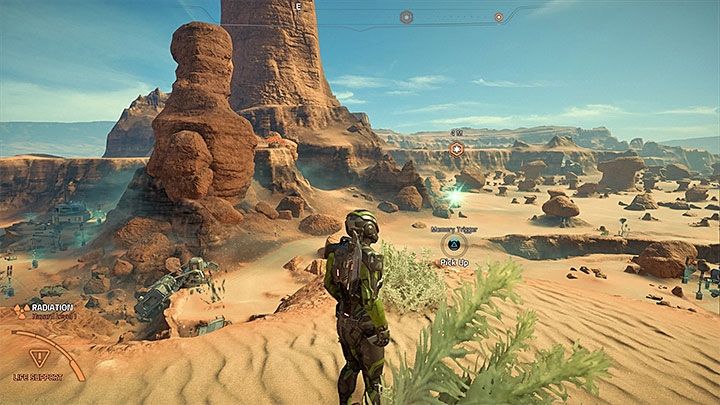 The next memory trigger is on the top of a small mountain near the north base on Eos, the one in which you started the exploration - you can see it on the picture. The path to that mountain is west to the item. 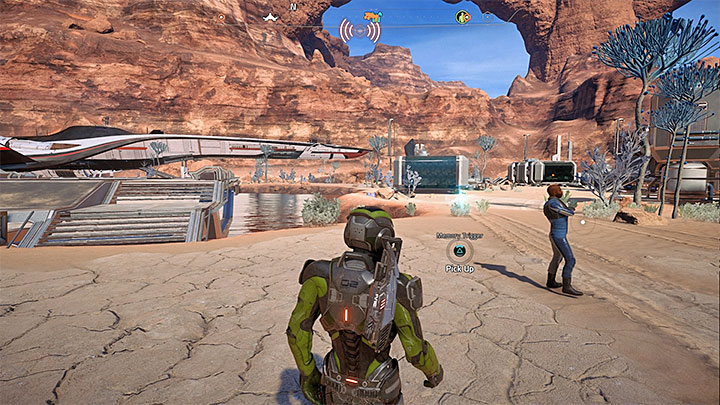 The memory trigger is in Eos outpost

The next memory trigger can be found in the place where you establish Eos outpost (this happens during the last part of A Better Beginning quest). 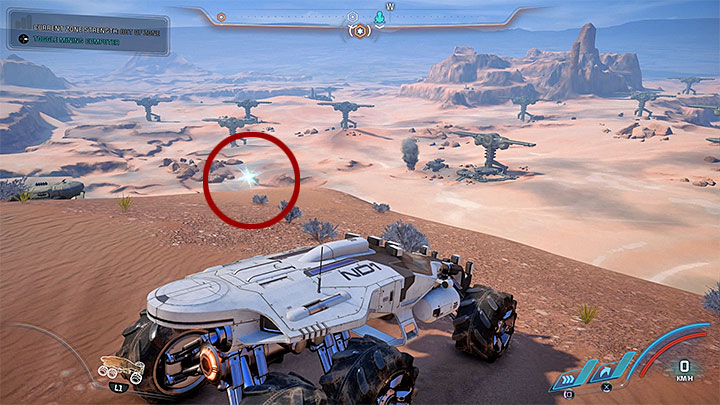 The next memory trigger can be accessed after the decrease of the radiation on Eos because it is hidden in the initially inaccessible west part of the planet. In order to find this item you must go near the Kett power station (the one surrounded by blue force field), that is visited during Defeating the Kett side quest. The memory trigger is on the hill, presented in the picture above, that can be accessed by using Nomad. 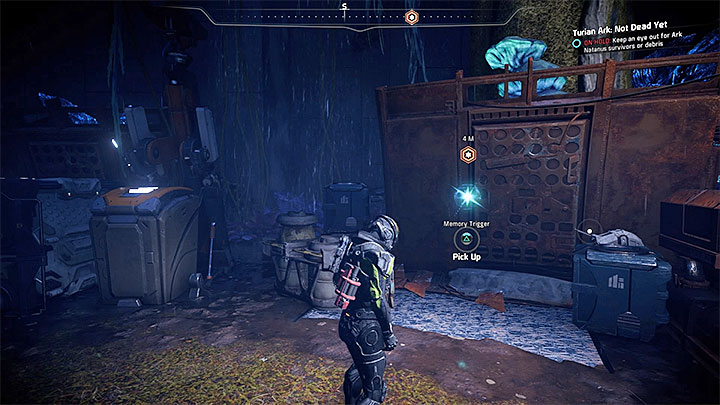 The memory trigger is near the Turian camp in the south-east part of Havarl. There, you can also start a side quest called Turian Ark: Not Dead Yet. 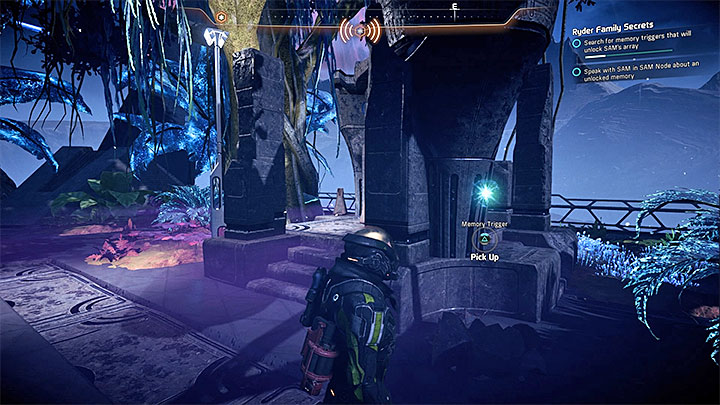 Look around Mithrava when you reach this location 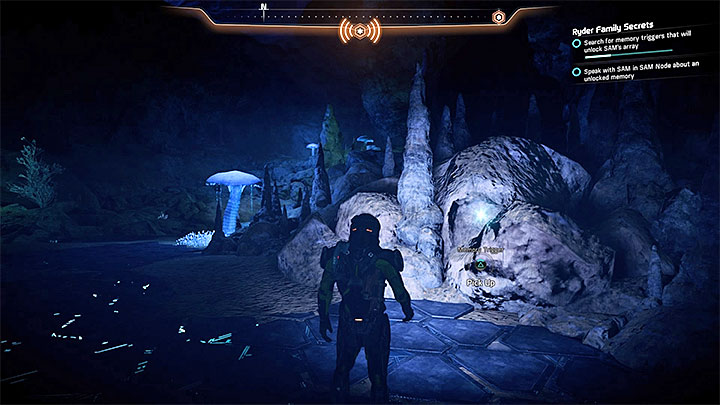 Search the cave, especially the part where you can find the monolith

The next memory is in the Buried Cave on Havarl, the one that you visit with Taavos. This location is also connected to the "biggest" side quest on Havarl - A Dying Planet. 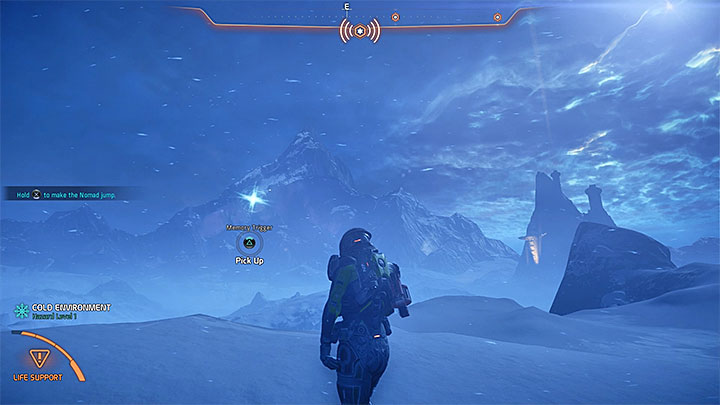 Get on the small hill

The memory trigger is on a small hill in the south-east from the Resistance Base on Voeld. 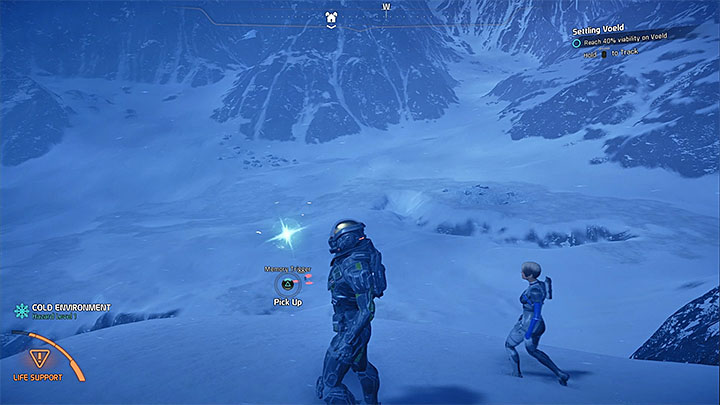 The next memory trigger is on the hill near the area where you can establish the outpost on Voeld. 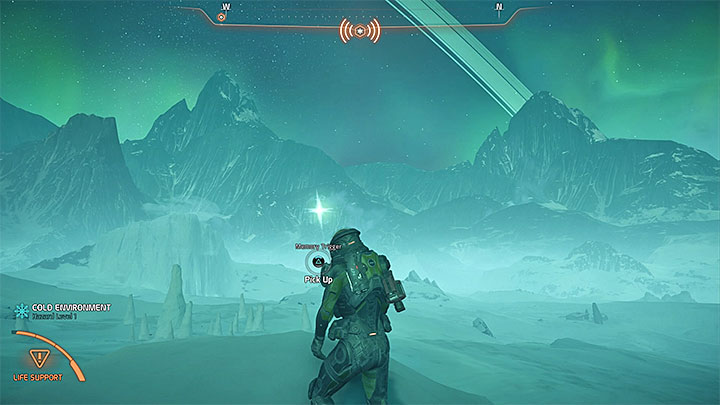 Look around the area near the big Kett base

The next memory trigger is on the hill near the Kett Base on Voeld. 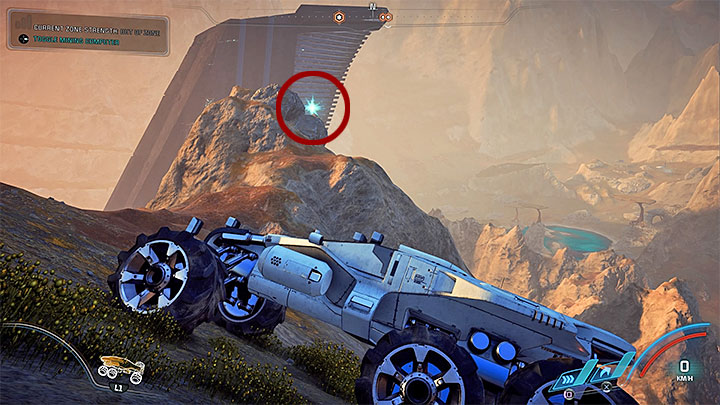 The first memory trigger is on a big hill south from the place where you can establish the Andromeda Initiative outpost on planet Kadara. Near the place where the memory trigger is you can also find one of the three Kadara monoliths. The memory trigger's location is presented in the picture above. Use Nomad to get on the mountain (if you need you can use thrusters) and then travel on foot (on your way you must perform precise jumps so you won't fall from the mountain). 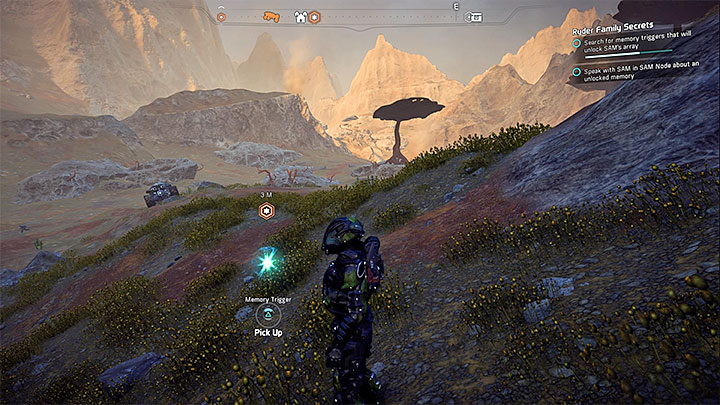 The next memory trigger is rather close to the previous one. It is located right next to the place where you can establish an outpost on Kadara (Settling Kadara quest). You can get to it without any problems. 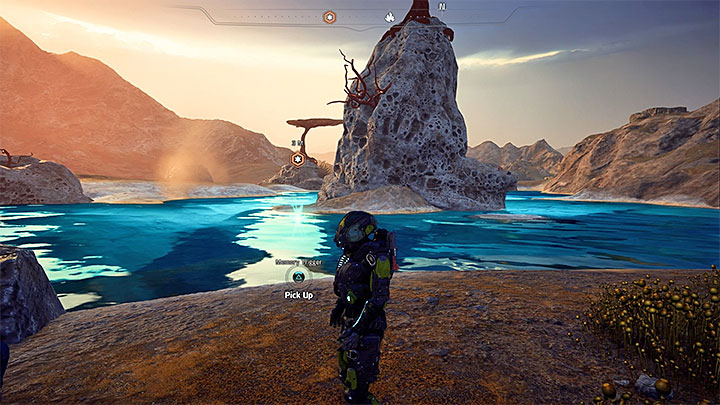 Visit the north-east part of the planet

On planet Elaaden you can find three new memory triggers, they are all close to each other. All "secrets" can be found west from New Tuchanka which is in the center part of the map. 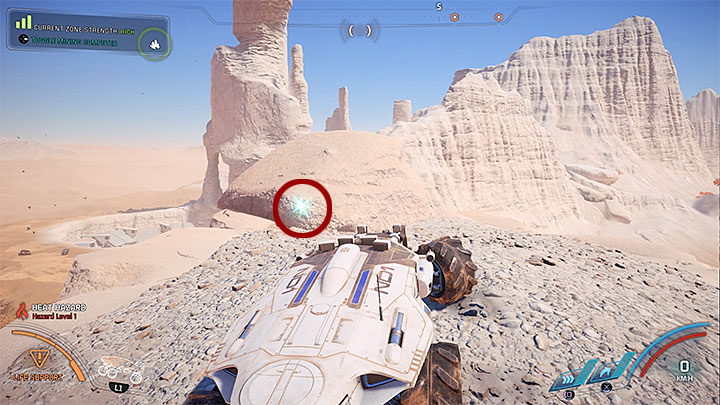 The memory trigger that is farthest in the north is on a hill. You can get on top of it by using Nomad. 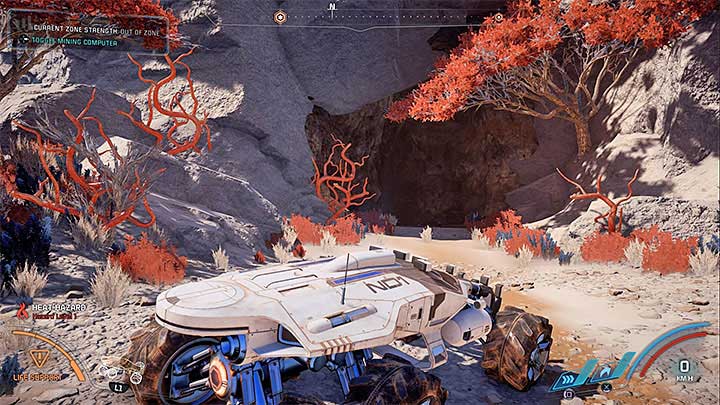 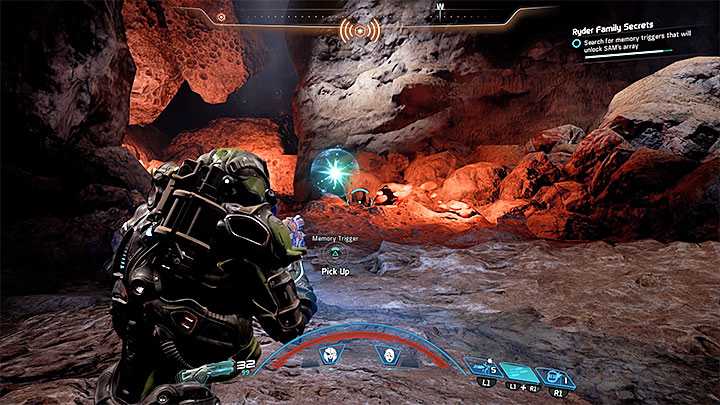 "The middle" memory trigger is inside a cave, the entrance is presented in the picture 1. During the exploration of the caves you should expect fights with monsters. Besides the easy to defeat Echidnas you can also face a Fiend (warning - some fights can be avoided by focusing on getting to the memory trigger). The location of the trigger is presented in the picture 2. 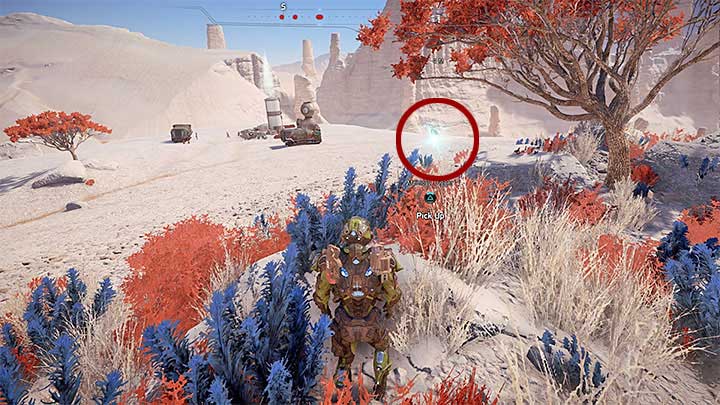 The memory trigger that is farthest in the south is on a small hill. Search the bushes near the tree.

This objective will appear in your journal once you've spoken to Director Tann during the final part of A Better Beginning. Use the rail and travel to Nexus: Cryo Bay. Inside, meet with Doctor Carlyle to ask about the condition of your twin brother/sister. Now you can attempt to communicate with your sibling. This "meeting" will enable you to lie about the past events or tell the truth about the death of your father and the situation on Eos. The choice of your behavior can have an impact on the scene where your twin wakes up from coma (you must be far enough in the main storyline for this to happen).

Check out Alec's journals in his quarters on Hyperion 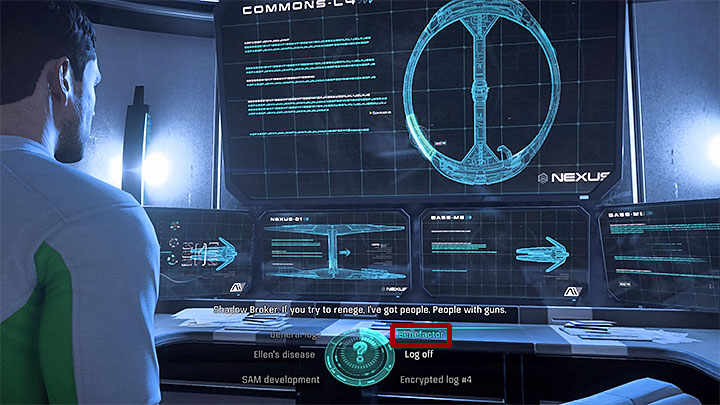 This objective is added to your journal after finding enough memory triggers that are required to unlock the memory connected with the benefactor supporting Andromeda Initiative. After watching this memory go to Alec's cabin, use his computer and select the audiologs category connected to the benefactor (the picture above). Listen to all recordings.

Speak with director Tann about the "benefactor"

Use the tram and travel to Nexus: Operations Center in order to meet with director Tann in his office. From the dialog options choose the benefactor topic. You won't learn more about this person but you can take a closer look at Jien Garson's death.

Search the information about Jien Garson's death in Nexus registries

The Nexus registry terminal is in the north part of the Operations Center. Activate it and check out the entries about the investigation of her death.

Examine the apartment in Nexus where Jien Garson's corpse was found 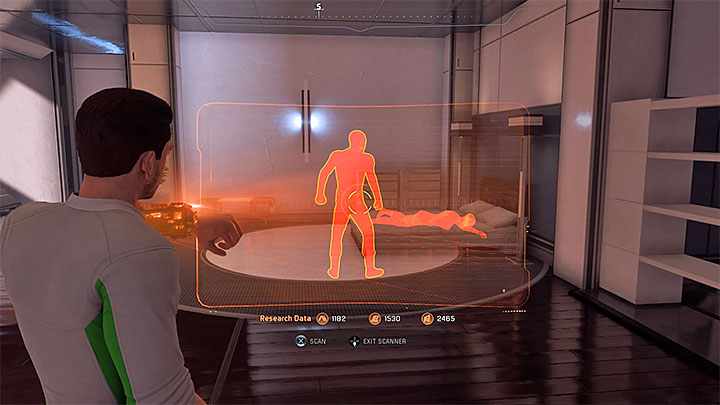 Scan the silhouettes of the two people (Garson's and murderer's)

Go to Nexus: Docking Bay and get on the upper level of the Common Area. There, you can find a few apartments, one of them was the crime scene. When you enter the flat go near the bed and use the scanner. You discover that Garson didn't die from an accident.

Continue scanning in order to get more information 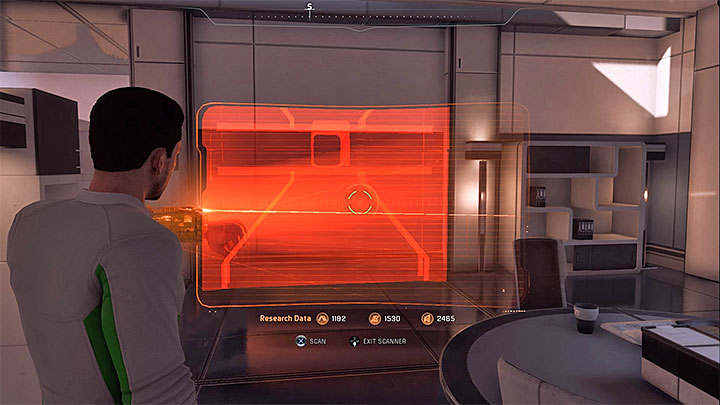 Go to the room closer to the apartment's exit and scan the wall presented in the picture. You find out that the wall is a secret door. Get closer to them and use interaction button to unlock the secret room.

Inside you find two datapads, one of them has the recording that confirms Garson's assassination. You also get a new trail. 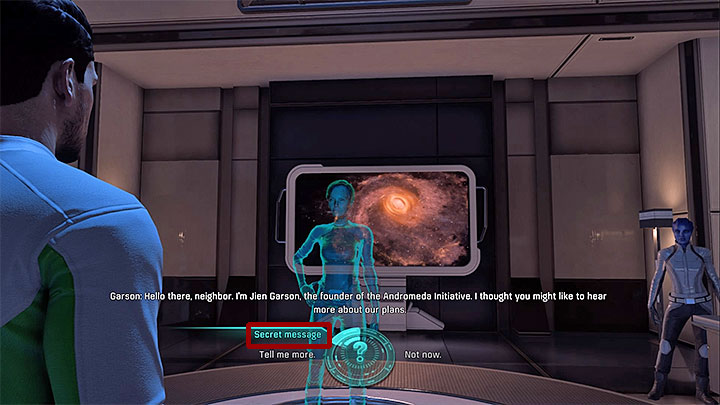 Go to Cultural Center and on the upper level find Garson VI. After initiating the "dialog" select the option presented in the picture above, the one about playing the secret message. You learn new facts about the Benefactor and Andromeda initiative.

Speak with SAM in SAM's node about an unlocked memory 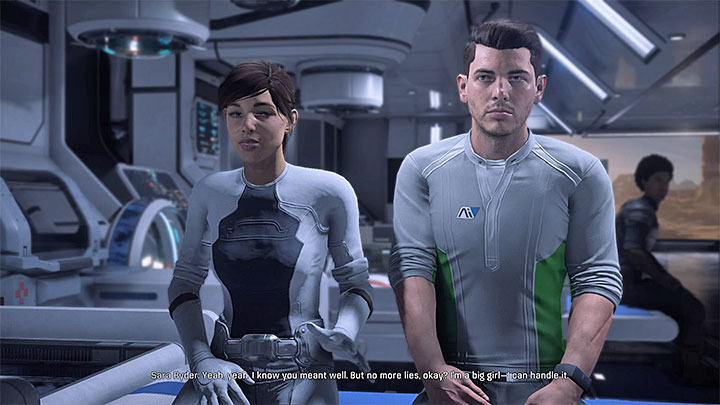 This event becomes active only if you've managed to find all the memory triggers located across the five different planets which you've visited during your travels. The initial part of The Journey to Meridian sees you meet up with your twin brother/sister, who seems to be in great shape considering her extended stasis. 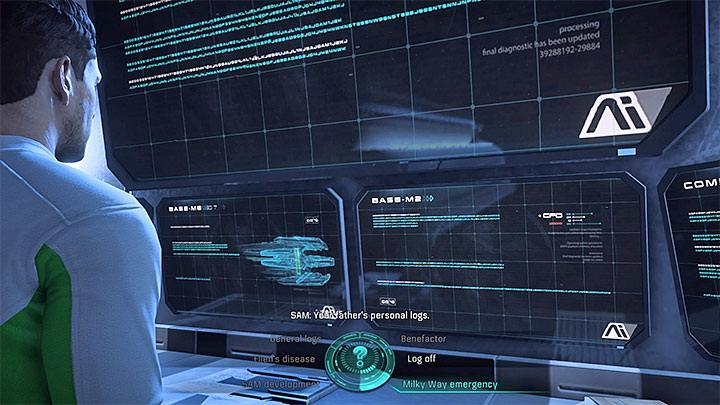 Once you've spoken to your sibling, travel to Habitation Quarters and visit SAM's node to take part in a small revelation. You'll be able to see the final memory, revealing that in her final moments, Ellen Ryder was placed in a cryostasis to postpone her unavoidable death.

Before you embark on the search for the pod, you can continue the investigation: 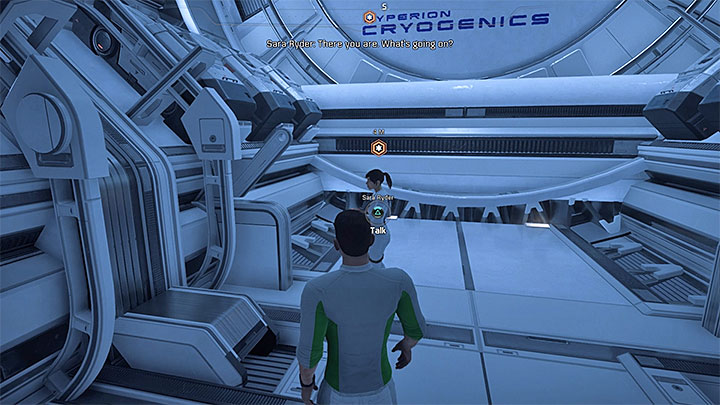 Use the rail to travel to the Cryo Bay and approach your twin brother/sister to talk about the state of your mother and whether there is any chance of finding a cure that will allow her to leave the stasis. The quest will end in the same room.