The following guide to Final Fantasy 7 Remake contains all the information about the revamped version of the iconic production from Square Enix. Here you will find basic information to help you successfully complete the game and learn the secrets of planet Gaia. This is a comprehensive guide that will walk you through all the most important aspects of the game. Here are some tips on how to develop Cloud and the rest of the team. We described the main character, Cloud, and the rest of the team - Tifa, Barrett, and Aerith. Each character has unique skills and a role in the team.

We describe combat in FF7 Remake, tell you how to effectively use character skills, and outline the difference between active combat mode and the one with the pause. In the guide you will find a description of the controls, starting tips, notes on the difficulty level, and the description of the matter system. We also outlined the difference between the classic combat system and what the gameplay looks like on the different difficulty levels.

We've prepared an extensive solution to guide you through the first part of FF7 Remake. All the main missions as well as the side tasks are described here. On the next pages, you'll read about tough battles, boss fights, and other key aspects of the story campaign. We've compiled a list of all the side missions and challenges you can complete in the background while taking a break from saving the world.

In our guide, you will also find the secrets and easter eggs that are hidden in the production. We have prepared an extensive guide on how to unlock the platinum trophy and complete the game at 100%. The game features minigames (Darts, Squats, Dancing, Shinra Combat Simulator, Hojo's Battle Simulator). Finally, we have also prepared an extensive FAQ section that answers the most important questions related to the game. You will learn how to discover all summoning materia (Ifrit, Shiva).

FF7R is a refreshed PS4 version of one of the most popular JRPGs ever released. The game was developed by Square Enix. The creators of Final Fantasy 7 Remake tried to make it feel like the original as much as possible. So we get a classic Japanese RPG in which we explore locations, interact with NPCs, develop one's character, and fight. However, some elements have been adapted to the modern game design formula - combat is much more dynamic, for that matter. With the complete reconstruction of the visuals, a better balance of realism and styling was put in place. To avoid omitting anything from the original production, it was decided to release the game in several parts.

Final Fantasy 7 Remake is set in a world combining elements of science fiction and fantasy, known as Gaia. The life energy of this planet is extracted by a company called Shinra. This can lead to complete destruction of the world. The main character is Cloud Strife - an ex-soldier who now works as a mercenary. He joins the Avalanche resistance to fight against this corporation.

The entire plot is divided into parts, and the first of them takes place in Midgar - a city that serves as the headquarters of the Shinra Corporation.

How does the episodic structure of the game work?

Unlike the original game, Final Fantasy 7 Remake has an episodic structure. This means that the game won't offer the entire story from the original, but only a part of it.

FF7 Remake was divided into a number of smaller parts that will be sold as separately. Each of these episodes contains a fragment of the story of the original game. Thanks to this, the developers can expand the plot by adding new characters.

At the moment, only the release date of the first part is known. We also know that the works on the second part have begun. It is still unknown, however, how many episodes the remake will get.

Will Final Fantasy 7 Remake be released on PC?

Final Fantasy 7 Remake was announced only on PlayStation 4. However, some of the Square Enix games have been released on PC after some time. This has happened with Dragon Quest Builders 2 released in 2019. Thus, it is likely that this situation will repeat.

In addition to the regular edition, the developers have also prepared two editions with additional content.

The Deluxe Edition includes a steelbook, artbook, a CD with the game's soundtrack and Summon Materia Cactuar DLC. 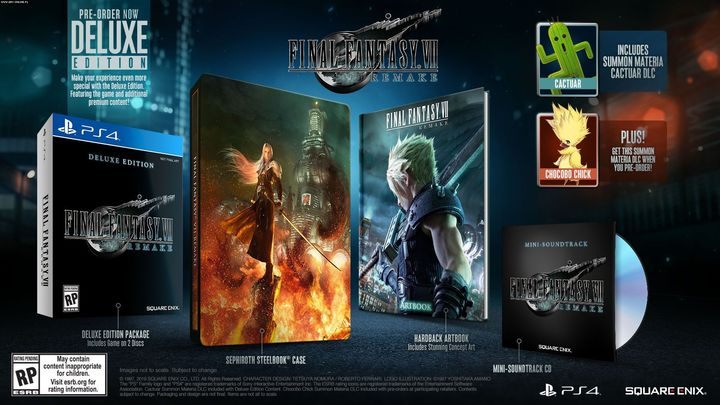 1st Class Edition includes an artbook, a CD with the game's soundtrack, a steelbook and a figure of Cloud Strife and his motorcycle - Hardy Daytona. 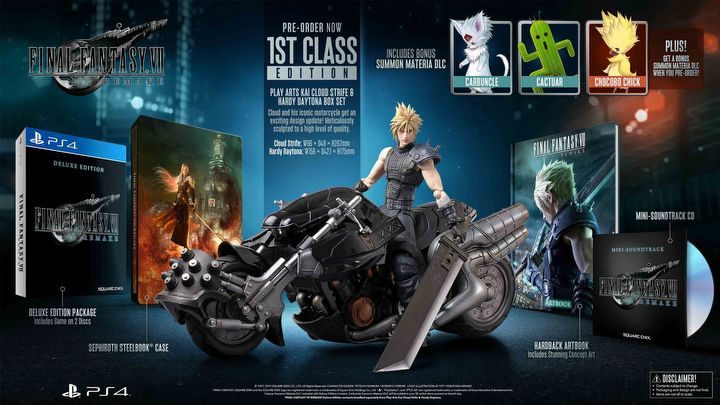 In the basics section we have prepared a description of the most important mechanics associated with the game. In this section you can find extensive starting tips, information about mini-games and much, much more.

In this part of our guide you can find answers to key questions associated with the game.

In this section you will find a detailed list and description of all Materia available in the game.

Here you'll find out what type of build is best for Cloud, Aerith, Tifa and Barret. Also, you'll read about the in-game weapons available for your team.

In this section we explain how to defeat all bosses available in the game.

We have prepared a comprehensive walkthrough of all main missions available in the game.

Chapter 9 - The Town That Never Sleeps

Chapter 14 - In Search of Hope

This year is slowly nearing the end, and we're all pretty glad about it. Nevertheless, at lest we've got some great video games during these past few months. If you're looking of a list of all the best games of 2020, you're in the right place.

Empty fillers, artificially prolonging the game? Or maybe side quests have a bigger role, which we underestimate? Today we stand up for them.

11 Video Games With a Powerful Message

We have prepared a list of interesting video games with messages we can learn from. By playing these unique titles you will experience some disturbing issues and problems that often occur in the real world.

Do you remember playing as an obese main character? Overweight characters are a rarity, and they're often portrayed according to the same, unflattering cliché.