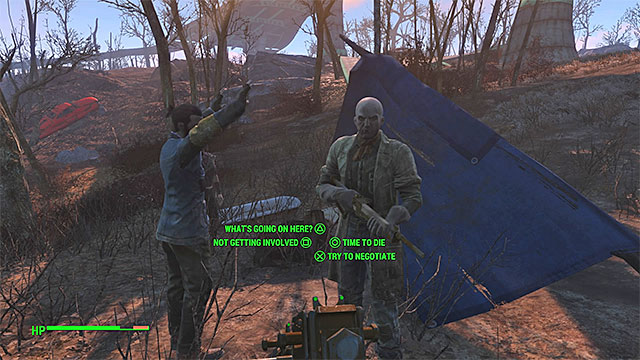 An example random event - a man suspected of being synth

While traveling through the game world you can witness many additional events. They can activate in various parts of the game world and take different forms. Every time they occur you can decide how you will act - you can for example join the battles, speak with the encountered character or escape from a strong enemy. The most important random events are listed below.

Important - Some random events can occur only after you complete specific quests or they allow you to unlock new missions. They are mentioned in the walkthroughs for journal quests (sections "Unlocked quests" and "Epilogue").

After you reach a settlement or small village you can notice hopeless inhabitants attacked by raiders, wild dogs or monsters. You can let the civilians be murdered or get rid of the aggressors. In the latter case you can count on receiving thanks, bottlecaps or even unlocking new settlement to improve.

Under the term of elite enemy you can find most of all behemoths, deathclaws (regular version or the deathclaw matriarch) and mirelurk queens. Winning battles with them is usually very hard, even if you have backup of other characters. You should decide to eliminate such enemies only later in the game after you reach higher experience levels and obtain the best weapons. In addition to that you can meet stronger versions of "regular" enemies, for example leaders of raiders or supermutants. In these cases you should also check whether defeating them won't be too troublesome for your current character level.

You can meet a doctor traveling through the game world. Such person is able to heal your character and remove radiation effects. Of course, he won't do it for free.

You can find small camps in random parts of the wastelands. Depending on the type of generated event the camp can be empty, inhabited by raiders or by friendly characters. It can be also occupied by monsters like ghouls or by wild dogs. Very frequently you can find at least one chest with more valuable items in such camp (if there are neutral NPCs in the camp, plundering the chest might be considered as theft).

Important - Some camps contain traps (for example mines) or there are thugs looking for easy prey hiding nearby. You must be always prepared for a combat or for having to heal your character.

You can find a murdered postman and after searching his corpse obtain letter which he was supposed to deliver. Reading those letters might point you to new random locations to discover on the world map.

You can meet a merchant who is traveling alone, is accompanied by a brahmin (a mutated cow) or has security. These characters by default are friendly towards you and you can trade with them or listen to their relation of the journey (it can guide you to new locations in the game world). Alternatively, you can try stealing from them or killing them. In case of a worse developed character aggressive action isn't recommended, as defeating the merchant or a whole group of enemies can prove to be harder than you assumed at first.

Important - One of the merchants you meet might be Gene. Using Charisma during the encounter with that character will allow you to spend 250 bottlecaps for a dog that can be your helper (he will be a companion independent from the other dog).

Important - One of the merchants you meet might be Larry. If you developed your ammunition stack in one of the settlements you can invite him to start living there.

Near bridges and other narrow passages you might find a group of raiders that will demand payment. You can find other way to the destination, murder all the bandits or use charisma to reduce the payment or even walk through for free.

You can meet a person asking for water, food or RadAway (chemical that removes radiation effects). Helping such character is rarely rewarded in any way.

You can find a minefield and depending on the type of generated event it will only make it harder to pass or will block access to some treasure. Specific mines can be disarmed or blown up from safe distance.

You can notice robots traveling through the game world. Usually they are focused on completing programmed activities, for example broadcasting commercials. However, some of them can attack you without warning or after you won't apply to their commands (for example, a robot can watch whether you are obeying the curfew in a specific location).

You can encounter enemy sniper that is eliminating all targets in his sight. You can kill him from distance (for example, with your own sniper rifle) or flank him (use cover on your way) and get rid of him from close distance.

You can witness a wrangle during which one of the participants is accused of being a synth. The game will let you choose how to react to the situation - you can allow the synth to be murdered, stand in his defense or use charisma to solve the matter peacefully.

Corpse at the road

You can find a corpse searching which will end in obtaining a valuable weapon, chemicals, rare upgrade or notes with information about, for example, a treasure hidden in a randomly selected location or about location of one of the vaults. You can explore the location from the note, but there is a risk that it will be strongly guarded by raiders or strong monsters.

Vertibirds appear in the game world since Brotherhood of Steel's Prydwen airship reaches the Commonwealth. They can attack the members of other factions, bandits or supermutants. If you're currently an enemy of the Brotherhood of Steel, you must be prepared that you too can be attacked by a Vertibird. In that case you can respond with fire (preferably a rocket launcher) or hide in some place with a roof.

Battles with members of the main factions

You can witness battles between the members of Minutemen, Brotherhood of Steel, Railroad or Institute factions. If you have friendly relations with a faction, it is a good idea to help it. You can also become an enemy of a faction if you kill all the members of it you meet.

Battles with various groups of enemies and/or monsters participating

You can witness battles between various groups of raiders or monsters. During each such event you should asses from distance whether the enemies are well equipped and if it is worth to join the combat. No matter the circumstances, it is a good idea to wait for enemies to kill each other and take care only of the survivors.

You can meet a person or group of people who know the current party member. Depending on the type of generated event such encounter might be friendly (for example, meeting Hancock's old friend) or it can lead to enemy confrontation (for example, meeting people about whom Piper wrote an article that put them in bad light or meeting thugs to whom Cait owns some money).

You can meet a group of supermutants traveling with captured hostages. You can save the hostage by getting rid of the supermutants. You will receive only the gratitude of the freed person for that or additionally some bottlecaps.