How to unlock: Enter the Colonial Taphouse bar in Diamond City and speak to Paul Pembroke outside (M6,1) after a brawl. 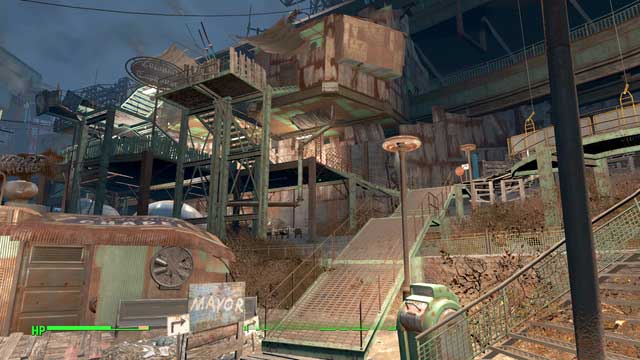 Go up and turn left in order to find the taphouse

At the main entrance to the city there are stairs that lead to mayor's house (lift) and on the opposite side there are small houses and a bar - the Colonial Taphouse. Walk inside and observe the events without interfering. Once the brawl ends you can speak to Darcy Pembroke and ask him about details of what happened or you can leave the bar immediately and speak to Paul Pembroke. He will want you to assist him when he will speak to the owner of the bar - Cooke. If you agree, he will give you 80 bottlecaps. You can also use Charisma to try going alone - this will allow you to have a calm conversation with Cooke. 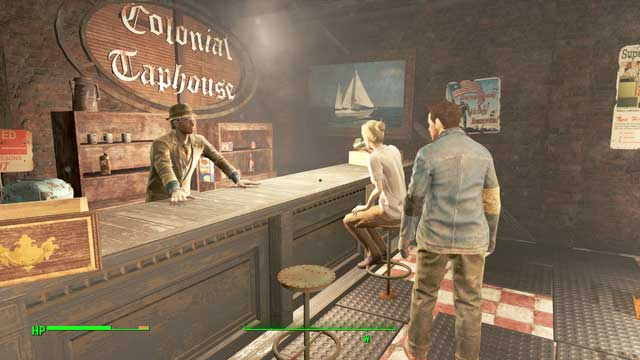 If you walked with Paul to the bar, wait for your turn and with a little help of Charisma (easy convincing) you can decide the fate of the barkeeper: if you don't have any Charisma points, the only option will be killing the barkeeper with your help. In that case you will learn about the further part of the quest from a note found at Henry's body. Other dialogue options will allow you to learn about drug traffic from Henry (the information will be same as in case of the note found with his body).

If you decided to walk alone, you can hear what Henry has to say. He will want you to cooperate with him in the next part of the quest, but you can also kill him and read the note. Walking to the bar without Paul will allow you to easily gain better "additional payment". 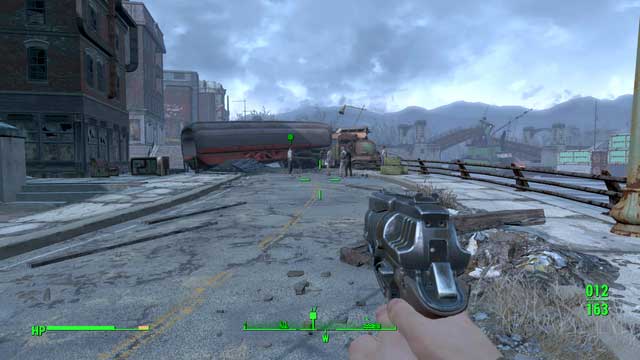 Go to the drug deal location. Don't attack the people there from far away as at first they aren't considered as enemies

It matters whether you struck a deal with Paul and/or Henry and whether you are going to the transaction location alone. Various options are listed below. The common part is the meeting place, near Back Street Apparel north from Diamond City. The above temporary companions don't give you any additional profits except for help in battle, so you don't need to take them with you. 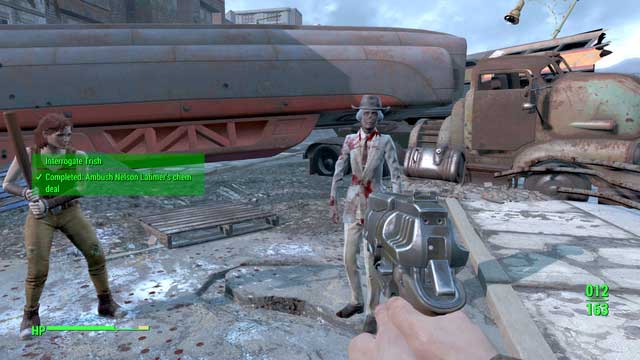 You have the widest possibilities if you go there alone. The gangsters found there will not attack you until you speak to their leader. Then the battle will start. One person will get out of it in one piece - Trish, member of the gang. You have two options: interrogate her or kill her and read the note found at her body. If you interrogate her, you will additionally receive Four Leaf Security Password from her and you will be able to start the next part of the quest. You can also order her not to tell her boss what happened. Otherwise you will meet him later and will be forced to explain yourself. 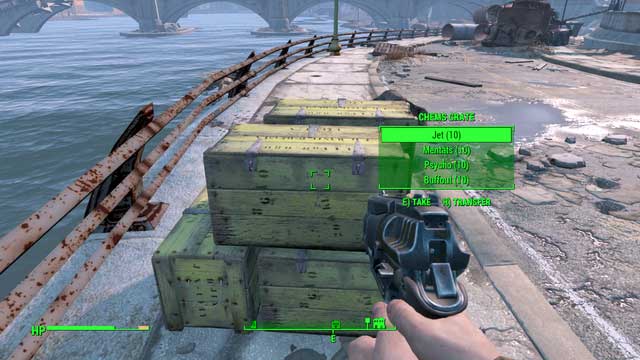 The chests are filled with valuable drugs

Search the yellow chests before you go further - they contain large number of valuable drugs.

If you went there with Henry, he will help you in battle but will not allow you to spare Trish. Then he will walk away.

Going with Paul will end in him wanting a share in the items found. You can divide the reward equally or use Charisma and get 70% of the rewards. Another option is killing Paul and being able to take everything. If you are completing the quest with Paul, you won't be able to collect the drugs until you speak with him. 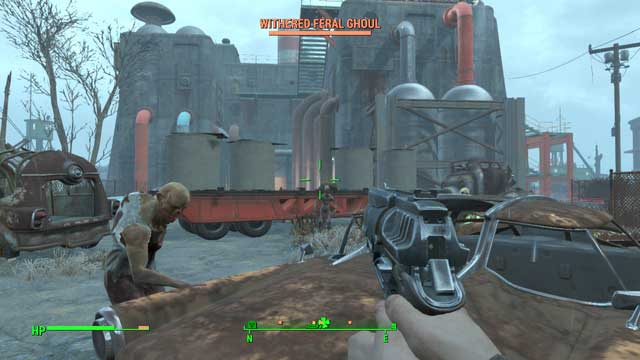 Go to the Fishpacking Plant

No matter if you learned about the lab in the Four Leaf Fishpacking Plant from Trish or from a note found near her, you will have to face many ghouls and optionally some Supermutants from the neighboring building there. 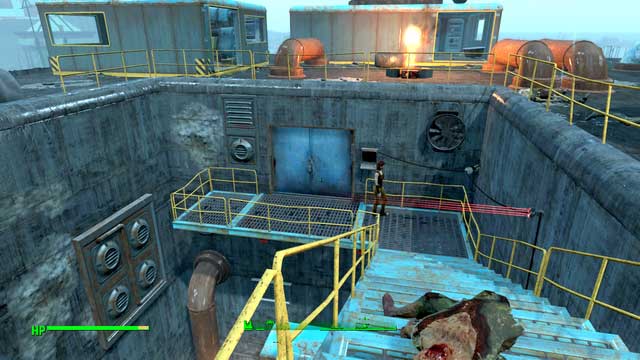 Entrance to the laboratory can be found at the stairs on the front side of the building, you can get there from the roof. If you interrogated Trish thoroughly you received terminal password from her that open the door to the laboratory. You can use it. 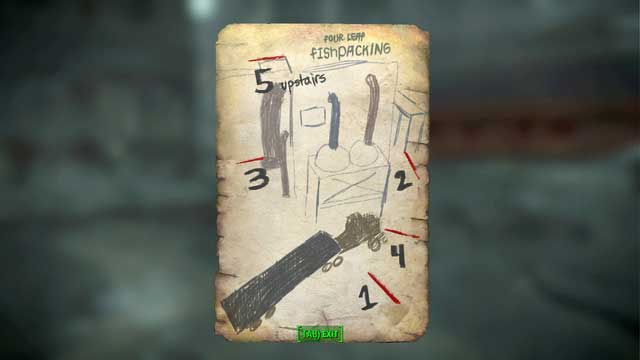 If not, you can hack the terminal (master security level) or use the note found next to her to solve a riddle - activate five sensors around the building in the order shown in the note. This will allow you to avoid hacking the terminal as the door will become unlocked. However, watch out not to activate the sensors twice. You should also stop your companion in one place as otherwise he can break the sequence of sensor activation.

Once you get into the laboratory the quest will end. Inside there are few scientists that won't be challenging for you. You can find some drugs here as well. 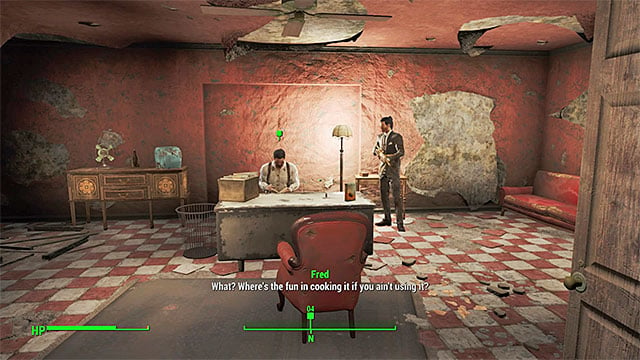 If Trish didn't die during the ambush on the drug deal participants (she was released and Cooke didn't killed her), her boss Marowski will learn that you robbed him. During your next visit to the Diamond City or Goodneighbor (few days must pass in the game) you can encounter his men and be persuaded to meet with him (you can of course kill them, but there is a chance that you will be frequently harassed by other gangsters).

Marowski is residing in Rexford Hotel in Goodneighbor. He will demand 2000 bottlecaps of payment for his loses. You can attack Marowski and his guards, give him the bottlecaps or use Charisma and ask him to lower the payment to 1000 bottlecaps. If you selected the last option, you will additionally receive one week to gather the caps. If during that time you won't return to Marowski and you won't pay him, his followers will find you again - you will be able to give him the bottlecaps or fight his men. 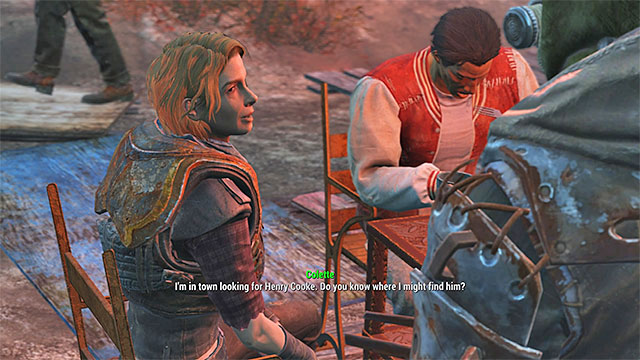 Colette should be located in the upper part of the market

If Henry Cooke died during this quest (you murdered him in his pub or he was killed during the ambush on the participants of the drug deal), after about one week his daughter Colette will appear in Diamond City. She will want to learn what happened with her father. Colette can be traveling through the main part of the market or she can be found near the Dugout Inn. 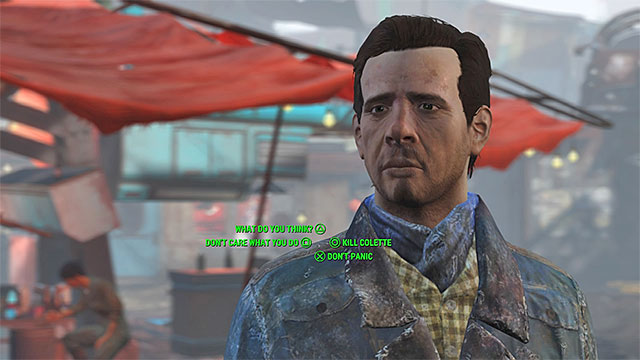 Paul can ask you to solve the problem with suspicious Colette

Colette can act in three main ways - she can believe your explanations and close the investigation, attack you or remain suspicious and continue her own investigation. The last option is most troublesome as she can find some leads pointing to Paul Pembroke. Depending on previous decisions, the man can ask you for help or point you as the person responsible for the murder. If the first option is triggered, then you can try calming Paul down, promise him that you will murder Colette or allow him to kill her. If the second option was triggered, during the next meeting with Colette you can start a battle or try calming her down or accuse Paul of murdering Cooke. 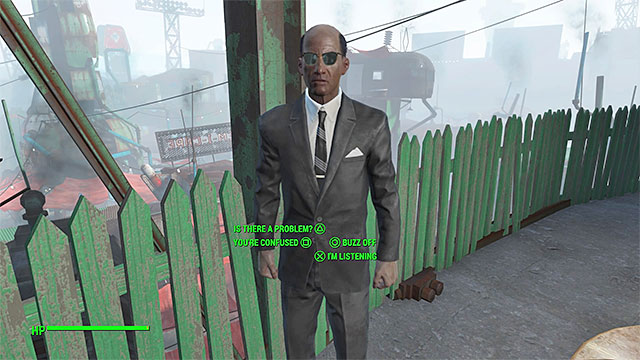 After about one day since the quest ends Malcolm Latimer, father of the previously murdered Nelson, will appear in Diamond City Market. He should reside on the upper balconies, near the entrance to Colonial Taphouse. He or one of his men can trigger a conversation with you.

Malcolm will want you to give him information about who killed his son. You can admit that you did it and then give large number of bottlecaps to the gangster as recompense or you can defeat him in direct battle. If you give him a less direct answer, the battle will not start immediately, but you will be regularly harassed by Latimer's men later in the game. The last option is lying that you aren't responsible for Nelson's death. This option is available only if you have developed Charisma to a very high level. If you managed to pick this version, you can point Paul or Marowski as Nelson's murder. In that case Malcolm will give you a killing contract and will promise you 400 bottlecaps. You can use Charisma again and increase the payment to 600 bottlecaps. 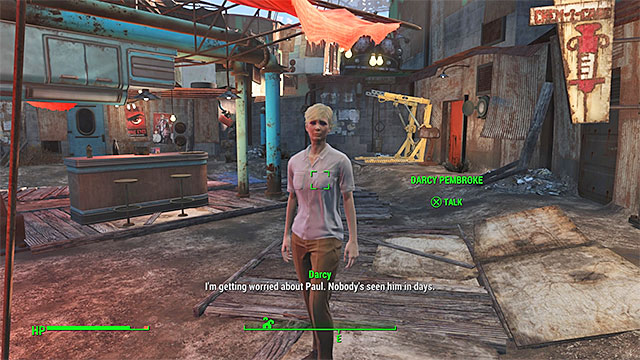 Darcy will be worried about Paul's disappearance

This quest can go in a completely different way if after the first meeting with Paul you will refuse to help him or if you won't go immediately to the Colonial Taphouse but instead you leave the city. When you appear again in the Diamond City Marked (few days must pass since the brawl in the bar) you can be hooked by Darcy Pembroke who will be worried about the disappearance of her husband (usually she can be found in the central part of the market but she can also be in her house). You can promise her that you will have a look at the case. 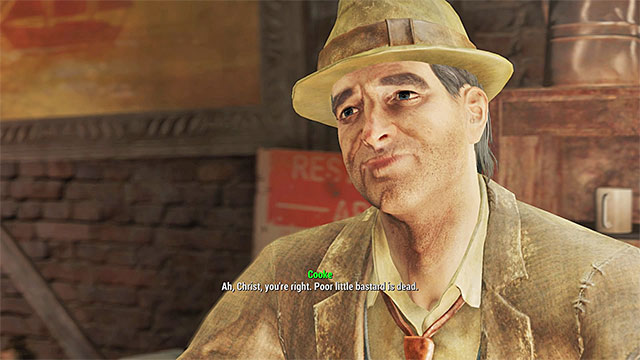 Cooke will reveal that Paul was murdered

Go to the Colonial Taphouse and speak to Henry Cooke. If you use Charisma during the conversation and speak one of the special dialogue lines, you will learn that Paul was murdered. You can return to Darcy and give her the bad news.

Depending on previously made decisions Darcy can accept her loss or she can start her own investigation. If the second option was triggered, you can meet her again after one week passes in the game world. Darcy will give you the Heist Photo then. After listening to the conversation with Darcy you can decide to murder Cooke and Malcom Latimer or you can try to sell the photo to someone interested in it - Henry Cooke, Malcom Latimer or Marowski from the Goodneighbor. Each of them will promise large number of bottlecaps for the photo. You can keep the bottlecaps for yourself or give them to Darcy.