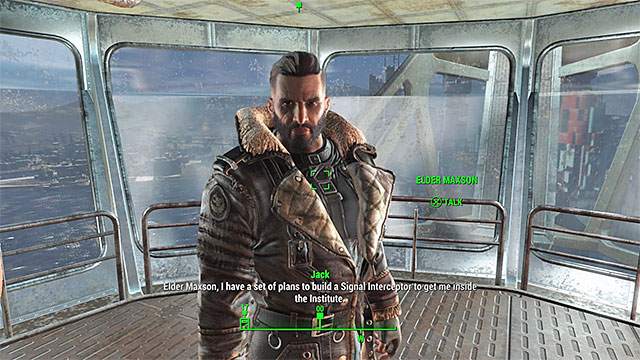 You can encounter the Brotherhood before their main forces arrive in Commonwealth, or only after that has taken place

Depending on the decisions that you take during the game, your first encounter with The Brotherhood of Steel may vary. Early into the game, you can decide to answer the distress call around Cambridge and reach the police precinct in Cambridge, which starts quest Fire Support, where you need to deal with a group of ghouls. If you keep ignoring the option to make contact with them, the Old Guns quest activates Reveille, which is a Brotherhood quest and where you need to go to the airship moored in Boston. From the moment of completing any of the abovementioned initial quests for the Brotherhood, you can take on more quests from then, both the main (the first one is Call to Arms) and side ones (many of them are random).

During the first "independent" quest - The Molecular Level, you can (although this is optional) ask the Brotherhood of Steel for their assistance at building the teleporter. If you have already completed enough quests for them, you will be granted their help. Additionally Elder Maxston asks you to complete quest From Within.

The last batch of quests for the Brotherhood of Steel opens with Tour of Duty. Acceptation this one means that you make your ties to the Brotherhood tighter. The final quest for that faction is The Nuclear Option and the objective is to destroy the Institute HQ. After you complete that quest, you can also accept A New Dawn, whose only objective is to talk to Elder Maxston.