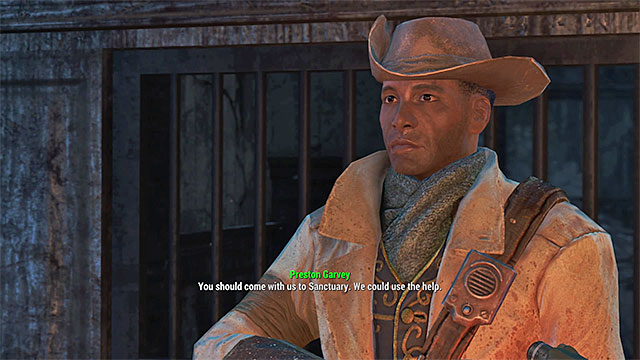 You encounter Minutemen very early into the game

You can encounter the Minutemen faction, virtually, at the very beginning of the game. This is so, because, after you leave Vault 111, you receive Out of Time, whose objective is to investigate the town of Concord. While exploring the location, you encounter the Minutemen that have taken refuge at the Museum of Freedom and this is where their first quest starts - When Freedom Calls. From the moment of completing When Freedom Calls, you can accept quests from the Minutemen faction. This means quests such as (Sanctuary, Cleaning the Way and the following ones) as well as side quests (The First Step, Mama Murphy and the randomly generated ones).

During the first "independent" quest - The Molecular Level, you can (although this is not required) ask Minutemen to help you build the teleporter. If you have completed sufficient number of previous quests for this faction, you will be granted help. Additionally, Sturges asks you to complete for him quest Inside Job.

You can unlock the last batch of quests for Minutemen if, in Institutionalized main quest, you tell no to Father and you do not start your work for the Institute or, if as a result of your actions (e.g. as a result of murdering Father), you become the enemy of the Institute. This unlocks quests: Form Ranks, Defend the Castle and The Nuclear Option. The last of the three is about destroying the Institute.

Important note - none of the remaining factions has a quest, as a result of which you would become the enemy of Minutemen. The worst thing that can happen is being locked out of the final quests, as a result of entering cooperation with the Institute.