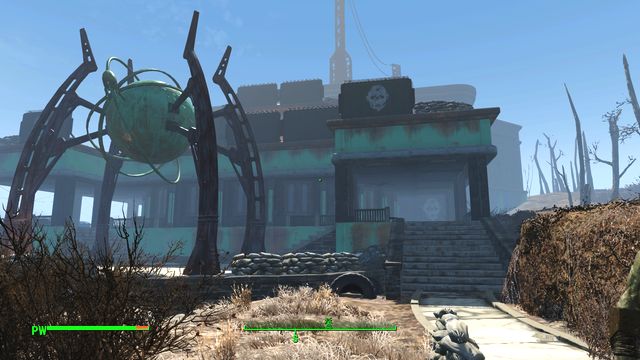 Gunners Plaza is the HQ of one of the enemy factions of the Commonwealth - Gunners. Here, you encounter several tens of strong enemies, where the majority of them (around 20-30) are indoors. Among them, there also are several especially strong leaders.

Before you start exploring this location, get enough ammo and Stimpaks, because you are up for a straining fight.

Indoors, there are quite a few automatic turrets. You can disarm most of them if you have the skill of terminal disarming.

Enemies will be coming in waves, thanks to which you can put your collection of mines and grenades to a good use.

If searching for technical documentation for the Brotherhood of Steel is your active quest, here you can find around 15-20 of them. 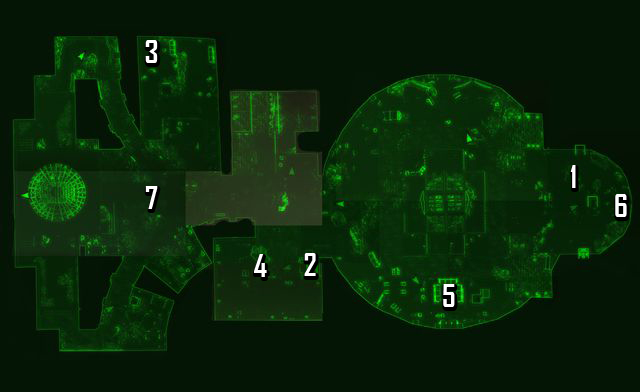 1. Terminal - novice level. Thanks to the terminal, you can activate a robot that helps you deal with enemies in the vestibule.

2. Elevator between the main part of the building and the basement that is a separate location. Among others, you find there:

A small room with a master safe in the Eastern part.

An elevator to the rooftop in the center of the basement, more or less, thanks to which you can avoid roaming around the building's floors.

Also, you meet Ryder here, one of the Gunners leaders. He has the key to the Recording room [7].

3. In the room at the first floor, you find a master safe. You can also open it using the terminal next to it. Inside, you find some ammo and several random items.

4. At the first floor, there is a door with an advanced lock. Inside, there is a "Fat Man" mininuke launcher. 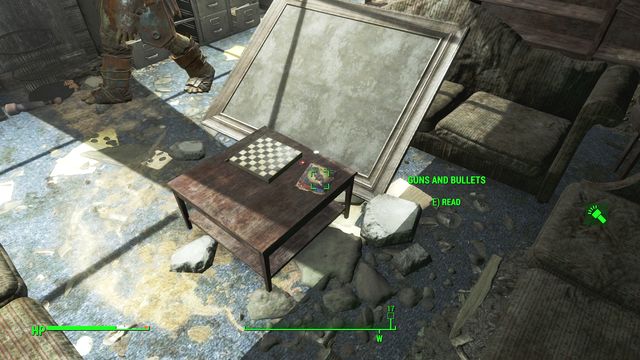 5. In the room at the first floor, on the table, there is an issue of Guns and Bullets.

6. At the first floor, there is a roof exit. Apart from more opponents, you find a fusion core and another "Fat Man" mininuke (on one of the opponents).

7. Recording studio at the ground floor. It has a master lock, but you can also enter there if you have the key. You can find one on either Ryder or Cruz - Gunners leaders. One of them is in the basement and the other at the first floor of the building. 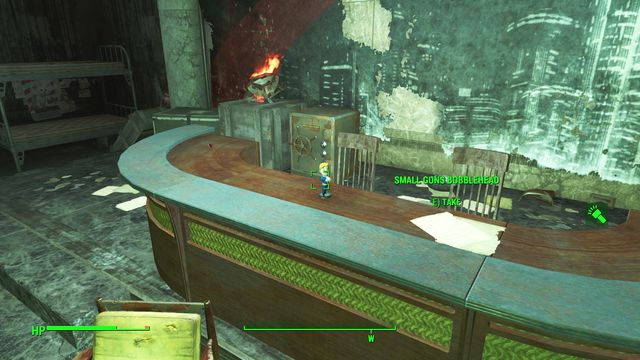 Inside, there are two opponents, including Captain Wes, a commander-in-chief of the Gunners. Also, there is a quite powerful turret here. A good idea is to throw several grenades in. You can loot Wes's corpse for a key, that you can use to open a master safe. Inside, there are quite a few valuable items, including a Stealth-Boy. Remember to collect the Small Guns Bobblehead from the desk in the center of the room.