How to unlock: Complete End of the Line w Institute (M5,6).

Relay to the airport 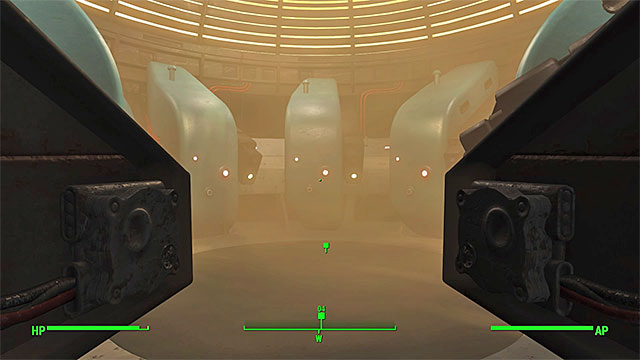 You need to start this quest with conversation with doctor Madison Li and doctor Rosalind Orman in the Institute. Listen to their plan of attacking the Brotherhood of Steel HQ and note that you have received Institute Beacons, which you can use during the mission to call for reinforcements. After the conversation, do not select any location on the world map and use the main elevator at the Institute. Just like in one of the previous quests, you need to return to the beacon that you used to get here the first time around. Approach the beacon and you will be automatically teleported to Boston Airport (without the need to pick the destination).

Note - Before you start the main part of the quest, make sure that you have plenty enough Stimpaks on you, as well as ammo for the best weapons you have. For the purposes of this quest, you can also wear the power armor, but this is optional. 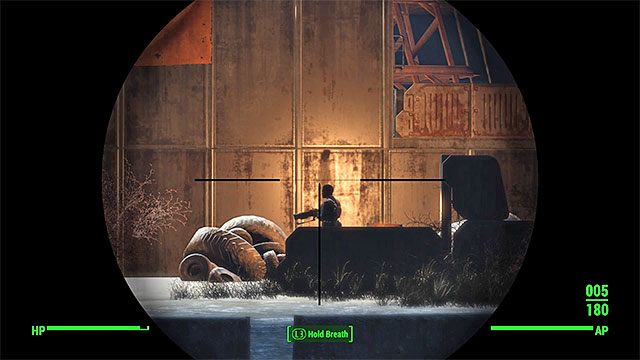 You can adopt a stealthy approach or kill all the enemies

There are two ways, in which you can infiltrate the terminal - by sneaking and avoiding confrontation, or by eliminating all of the enemies that you encounter. In spite of what it seems, the latter approach is better, because they will not later join into compulsory fights later into the quest. 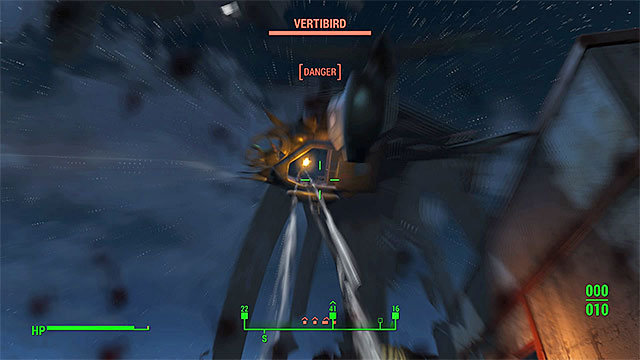 Shoot down Brotherhood of Steel's airships

It is a good idea to kill soldiers of Brotherhood of Steel from a long distance. Use the better weapons against opponents that wear power armors, because these are more resistant. Also, if you wreak too much havoc, you will be attacked by one, or more, Vertibirds. In such situations, it is better to use rocket launcher or any other powerful ranged weapon, to shoot them down quickly (the crew of the Vertibird dies then). Apart from that, pay attention to turrets and mines- traps deployed around (walk around them or defuse them). 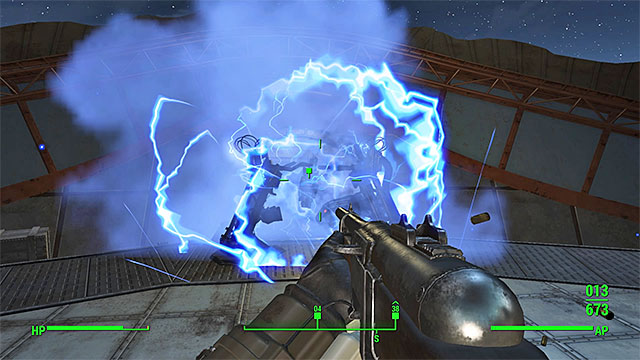 Use any weapon to destroy generators

You receive this quest after you reach the main part of the airport. The game marks all three generators on the map. Two of them are in spots that are easy to access and of course, they are heavily guarded by Brotherhood soldiers and turrets. You do not need to interact with the generators and simply use any weapon to destroy them (you can even do that with the weaker weapons). 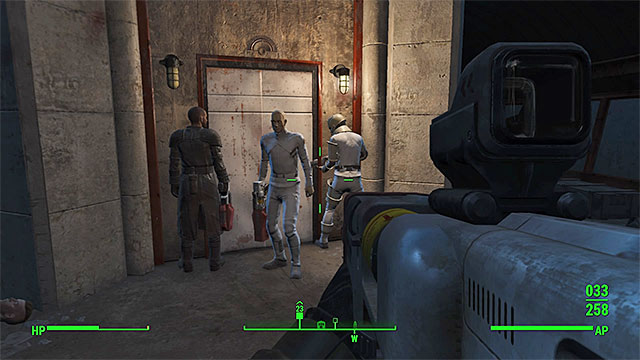 The third generator is not as easy to reach, because it is inside the flight control tower. The only way to get here is by using the small elevator shown in the above screenshot. After you exit the elevator, first deal with the Protectron (robot) there and only then destroy the generator. 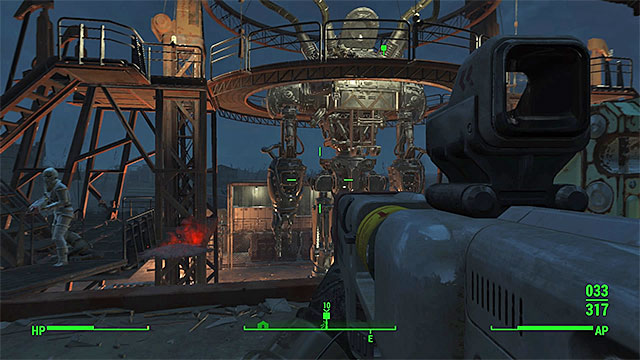 Liberty Prime is a robot and you can find it deeper into the Brotherhood HQ, but due to its size, you will not have any problems locating it. After you approach the scaffolding that supports the robot, deal with soldiers of the Brotherhood of Steel around.

Note - You can also secure the area around Liberty Prime while completing the objective concerning the generators. 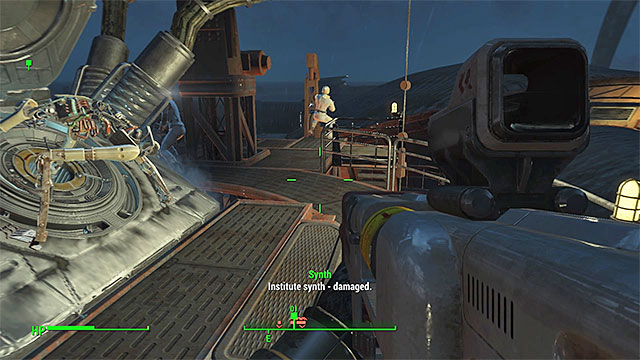 Now you will have to fight the major fight of this quest, where your main objective is to protect the Synth shown in the above screenshot, who is hacking Liberty Prime. Fortunately, it is not as difficult as it may seem, because the synth does not have any health bar, whose depleting would mean failure. . In general, you need to focus on staying alive yourself and on preventing the situation in which you are surrounded by too many soldiers of the Brotherhood of Steel. 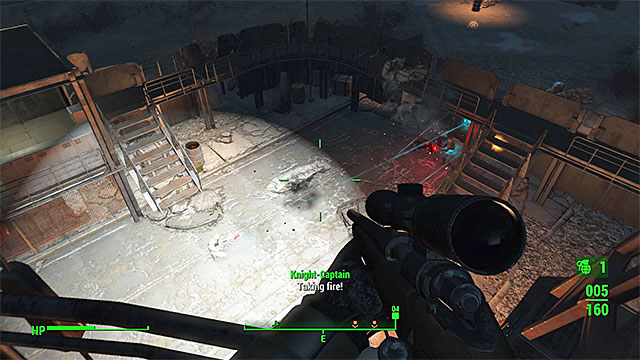 Using beacons will let you call for reinforcements

During the fights, it is best to stay on top balconies around Liberty Prime, which will provide you with excellent range of vision and thanks to which you can attack enemies at a distance. While you are here, it is a good idea to complete the optional objective of the quest and use all three beacons that you have received at the beginning of the quest. Beacons work in the same way as grenades do, so after you equip them, hold down the key/button for throwing. It is important that you throw beacons into free, open spaces, (e.g. onto the ground), thanks to which reinforcements from the Institute will be properly deployed. Using all three beacons results in your completing the optional objective. 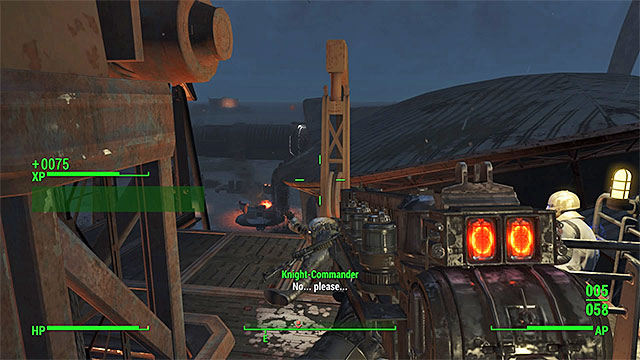 You need to keep fighting up until the hacking progression bar reaches 100%. Later into the fights, some of the enemies will, most probably, make it onto top balconies, so switch to a short/medium-range weapon quickly. Throughout the fight, use the best weapons against enemies that wear power armors. Also, keep in mind that Elder Maxson will appear on the roof of the terminal - use rocket launcher, or any other good weapon to kill him quickly.

Escape from the airport 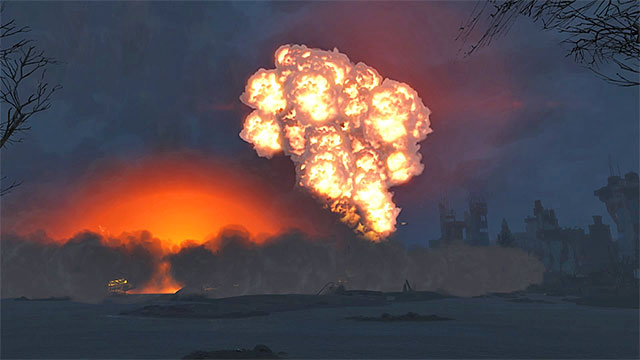 After you are teleported, you will watch the explosion without being bothered.

After the hacking progression bar reaches 100%, you will receive the last objective and you need to escape from here. Climb down the stairs and go in any direction, because the most important thing is that you get away from the robot. You will be automatically teleported into safety and you can watch the explosion. The Brotherhood of Steel has been defeated.